The Vaal remains up shit creek

An ambitious scheme to fix sewage problems in southern Gauteng has been replaced by a temporary solution, which will fix little. Sewage will continue to flow into the Vaal River, South Africa’s most important water system. Raw waste, from faeces to condoms, passes through broken treatment plants and flows into the system’s rivers, which provide water for drinking and irrigation.

Water is life. But water with sewage in it kills people and poisons crops. We don’t hear about the scale of the catastrophe, because someone dying from diarrhoea isn’t recorded as a death caused by a broken sewage plant.

The price tag for repairs runs into the billions. But, like all crises in sanitation, sewage and water, it is one that people saw coming decades ago. Sanitation is an infrastructure story. It takes six years to build a new wastewater treatment works. 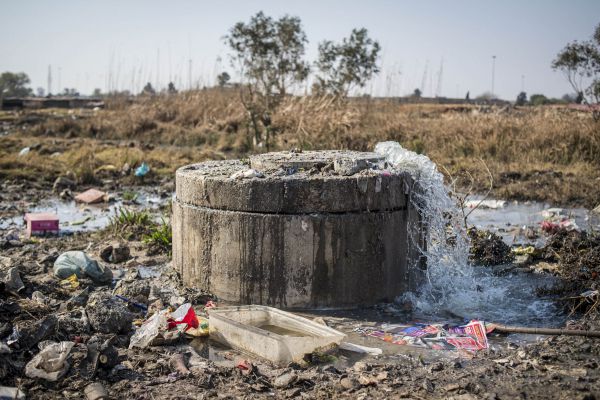 The water and sanitation department is implementing a temporary solution ‘due to financial constraints’ but the sewage flow will remain far too high and costs to repair the system will rise ever higher.(Delwyn Verasamy)

South Africa is good at big liquid infrastructure projects. It’s not so good at maintaining plants and upgrading them. That’s why 80% of the country’s 824 treatment plants release polluted water.

In Sedibeng, the district municipality covering southern Gauteng, a plan to change this cycle was discussed in the early 2000s. The three local municipalities that fall under Sedibeng — Emfuleni, Lesedi and Midvaal — had ageing infrastructure and growing populations. Something had to be done. If things went wrong, sewage would flow into the Vaal River, which supplies drinking water to Gauteng and all the way to the Atlantic Ocean. 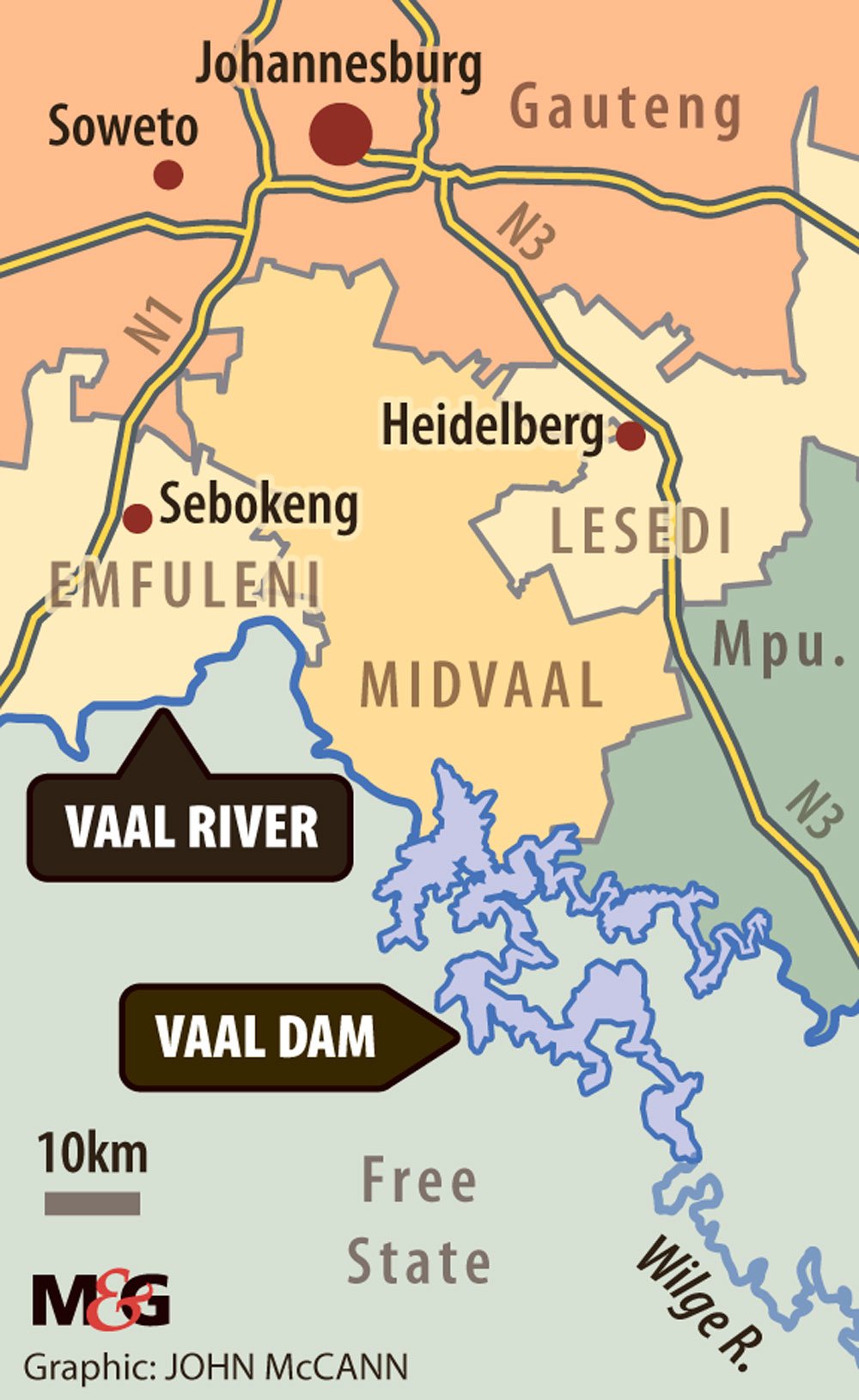 Sedibeng told the Mail & Guardian that its sewerage plants were built in 1984. Lack of funds for maintenance has meant it had to “cannibalise components to keep other components working”.

By 2009, a scoping report was completed. It started with the concern that “the sewage system in the area is aged and the pumps and pipes are in brittle condition”. When things broke, as they did with increasing frequency, it was difficult to find replacement parts.

Sewage in the area already exceeded the capacity to treat it by 5%. When that number reached 20% (by 2015), the report said sewage would be released into the Vaal. By 2025, the region will produce 145-million litres of sewage that it won’t have capacity to treat. That’s 10-million toilet flushes every single day, with nowhere to go.

Sedibeng’s solution was the Sedibeng Regional Sanitation Scheme. Two plants would have their capacity doubled and a huge new plant would be built, able to treat 147-million litres of sewage a day. These would be connected with new pipes and pump stations to move sewage to where it could be treated.

Building it would unlock development across the area. By that point, Johannesburg had expanded as far as it could towards the east, west and north. Only the south remained.

But development is not going ahead because of a moratorium on new RDP homes and other estates as a result of inadequate sewage treatment capacity.

The Sedibeng Regional Sanitation Scheme would create 13 000 jobs and generate R10-billion in growth, according to an economic benefit report. It would also solve the court order — thanks to action by civil society group Save the Vaal — that obliged sewage plants to stop releasing untreated water.

The regional scheme fell under the jurisdiction of Emfuleni municipality, the only municipality in the area with authority to provide water services. It approached the treasury in 2011 to ask for funds to set up a project implementation office. This would pay advisers and buy land. The MEC for local government and housing also went to the department of water and sanitation to ask for funding.

The treasury agreed; it told the M&G that Emfuleni was given R400-million for the implementation office. The municipality also registered the scheme as a public-private partnership.

In the original project plan, which the M&G has a copy of, this was a critical part of the project. Emfuleni knew the government could not pay the R4-billion needed for the upgrades and new plant, but half of that could be raised through a private partner. Critically, this plan also covers the R37-million a year the scheme would need for ongoing operations and maintenance. Without this funding, the new waste works would crumble.

With money on the horizon, Emfuleni signed a contract with a consortium to run the implementation office. This would start the engineering plans and work by the public-private partnership. Everything was on track for a big project to avoid the 2025 treatment gap of 145-million litres a day.

Then the national water department intervened, a week after Emfuleni had signed the contract to start work. A letter from the minister, Edna Molewa, said a decision had been taken at a recent Cabinet lekgotla to include the Sedibeng scheme in the national infrastructure drive. Rand Water would take over the project.

The water affairs department told the M&G that it had to intervene to save money, because Rand Water was cheaper than any private company the municipality was going to outsource work to. It also said the parties came to an agreement on the intervention.

Rand Water agreed to step into the shoes of the existing contractors and the existing plan. This would see it do everything in the original plan, from upgrading old plants, building new plants and infrastructure to the public-private partnership.

But the municipality wasn’t pleased, and went as far as to get a legal opinion on the intervention. The M&G has a copy of this opinion, which notes that the minister’s intervention “is arbitrary and should be reconsidered”. But it was never used.

Separately, it told the M&G that Rand Water was appointed “for reasons Emfuleni still doesn’t understand”.

The scope of the project has also been greatly reduced.

Rand Water said that, “due to financial constraints”, only two of the plants would be upgraded, but not to the original planned capacity. When the work is finished in 2019, this will have added an extra 65-million litres of treatment capacity.

The water and sanitation department said R5-billion was needed to do the full Sedibeng scheme, which would come when the treasury could allocate it. “The timelines are decided based on the available funding and module[s] to be implemented.” 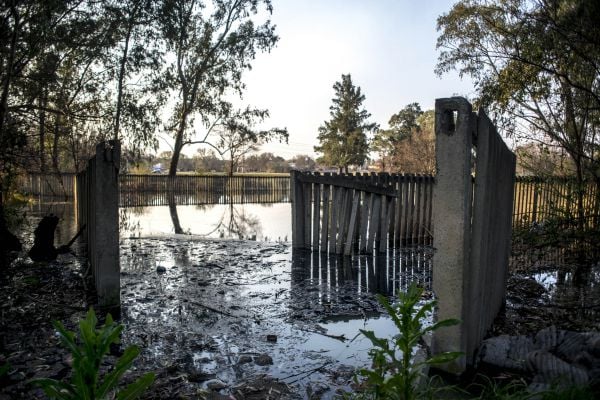 Sewage swamp: Ageing pumps and pipes have been left to rot, resulting in as much as 80% of the country’s 824 treatment plants releasing toxic waste. It takes six years to build new wastewater treatment works (Delwyn Verasamy)

In July last year, in minutes of a meeting between everyone working on the scheme, a senior Emfuleni official complained that “it had been decided at some stage to implement a temporary project”.

A temporary fix leaves a shortfall of 80-million litres of sewage a day by 2025. The new infrastructure will also be handed over to Emfuleni municipality, which has been put under administration and has had its vehicles seized by debtors. With the public-private partnership scrapped, the municipality will have to finance the operations and maintenance of the plants from its own budget.

It did tell the M&G that it was “forging ahead” with a turnaround strategy. This included funding last month to refurbish 44 sewerage pump stations, so the waste would get to treatment plants.