In a not-so-distant dystopian Zimbabwean future, the country is a barren wasteland decimated by years of drought, unbridled corruption from a second ZANU-PF/MDC unity government, and urban grooves music (it’s a real genre).

The people are now Orwellian automatons from 1984 whose minds are numbed and dumbed down by decades of vulgar mass consumption by the political elite and unfulfilled campaign promises, and now blinded by the brightness of African PopArt ZANU–PF and MDC election regalia with Jah Prayzah and Killer T’s faces emblazoned on them.

A greying man picks up his relic of a communication device from 2018 … An iPhone X. On the now battered screen is a page that the phone has been stuck on for at least 50 years. It is one of those wholesale Wakanda/African bumper sticker proverbs from an erstwhile news hegemon (BBC Africa). It reads “When elephants fight, it is the grass that suffers.”

On July 30 2018, Zimbabweans took to the polls in what was ironically called a “harmonised election”. Harmonised in the sense that it combined the presidential, parliamentary and municipal ballots. This is ironic because realistically, the events leading up to the election — on all sides of the kaleidoscope of political parties — were anything but harmonious.

In February 2018, Morgan Tsvangirai, a giant of Zimbabwean opposition politics lost his protracted battle with colon cancer, leaving a power vacuum in his party and a coterie of gnomes from the various splinter groups of the MDC at loggerheads about who would lead the party in this most important of election years. Enter Nelson “Nero/Wamba” Chamisa.

To say he dragged the various MDC formations now called the MDC Alliance (i.e MDC N, MDC S and not T, and other fancifully named rainbow breakaways) to the presidential election by the scruff of the neck kicking and screaming, is an understatement. Chamisa boldly assumed power and led the Movement for non-Democratic Change Alliance to within a whisker of victory against the wily operator that is Emmerson “ED” Mnangagwa and “The Junta”.

On the ZANU-PF side of the many-sided coin, Mnangagwa was fighting battles of his own after deposing his mentor and erstwhile boss Robert Mugabe in a coup–not–coup in November 2017. On June 24 2018, he found himself thanking his ancestors after surviving what we are told was a grenade/bomb attack at White City Stadium in Bulawayo.

Harmony is not what we would associate with this election.

Nonetheless on July 30, Zimbabweans voted en masse and ED Mnangagwa won the mandate to govern as president by the skin of his teeth; 50.8% (which was later revised to 50.69% due to “clerical errors”).

Smarting from the loss, despaired having declared himself the winner of the presidential ballot in the early hours of July 31st — when less than 10% of the over 11 000 polling stations had declared results — Nero went to court to contest the result alleging irregularities in the verification of the V11 forms. This was also after the army had gunned down rowdy protesters who had allegedly been cajoled into protesting the ruining party ZANU-PF’s decisive parliamentary victory by Tendai Biti on August 1 2018. Six people lost their lives.

“I love Zimbabwe. Zimbabwe is my home, my refuge, my comfort, yet on so many levels and in so many ways our politics really just gets in the way of being … Zimbabwean.”

I blame Nero, I blame Ngwena (though I really do love his new dispensation/Ngwena victory dance). I blame Constatino Guvheya Chiwenga, I blame Tendai Biti because as one of my favourite Twitter philosophers Ranga Mberi put it: “In Zimbabwean politics, everywhere you look, there are no grown-ups.”

Mandela was right when he said Zimbabwe suffered from “a tragic failure of leadership”.

Everywhere you look in our politics, we have no grown ups.

As these elephants continue to fight against each other, the people of Zimbabwe continue to get trampled. I have observed all our leaders from afar with the detachment that these emotive political matters deserve and it seems to me that on the face of it, none of the protagonists in this drama have the interests of ordinary Zimbabweans at heart. We have no genuine leaders.

Why, you may ask?

Just look at the events of August 2018 and you will see that our politicians are obsessed with the pursuit of power for power’s sake. Power is an end in itself and not a means for the betterment and upliftment of ordinary people’s lives. On all sides there is a collective failure of leadership which manifests itself as underhanded electioneering and political chicanery that leaves a bitter taste in the mouth.

This leaves one with no choice but to ask, “WHERE ARE OUR LEADERS?!”

From Nero’s hiring of Raila Odinga’s strategist/statistician, Edgar Otumba Ouko and the subsequent parachuting in of a supposedly top-notch legal team from South Africa at considerable cost, to ED on the other hand wasting no time in purchasing the latest armoured Mercedes-Benz limousine all while his own election to office is being disputed (Zimbabwe’s Constitutional Court dismissed Nero’s court challenge).

Yet there was a silver lining in this election period. That silver lining came in the form of Advocate Fadzayi Mahere’s ‘Yellow Campaign‘. 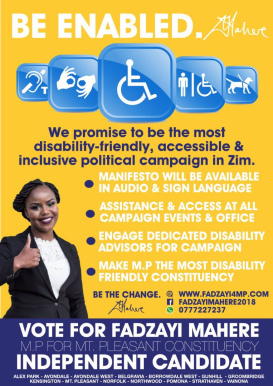 In my view, notwithstanding the politics she might stand for, I do believe that her campaign has taught Zimbabweans on some level about the standards they should demand from their leaders as it is essentially them, the people who elect them into office. If anything, she has shown us that despite the higgi-hagga and crinkum-crankum of the current political discourse, young people who are determined to create the conditions of their own happiness in a Zimbabwe that they can call their own and be proud of exist.

Everything is at a standstill in Zimbabwe. There is no meaningful money in the banks. Fuel importers have their allocations put on hold by the Reverse Reserve Bank of Zimbabwe as “markets” await what’s to come.

On Sunday August 26 2018, as the dust from the still disputed election settled, ED Mnangagwa was “adorned with the instruments of power”. Current and former heads of state from South Africa, Botswana, Zambia, the DRC and Rwanda were all in attendance to witness Mnangagwa’s inauguration as the second president of the Republic of Zimbabwe.

Now that we have the outcome, Zimbabweans still need cash in the banks, medicine in the hospitals, better roads and hope for a future that they were long promised decades ago by successive iterations of the ruining elite. Until the goal is the well-being of Zimbabwe’s long-suffering masses, our elections under the current binary language of our politics will continue to be an exercise in futility. As my favourite philosopher said: “We are a people that love to denigrate without much introspection.”

Let us hope that after these elections, there will be more introspection and less denigration.

This article was first published on the ConversationZimbabwe.