Waste. It’s one of the words that conjures up negative images of flies and biblical plagues. Something you throw away and forget about.

In practice, that means throwing a range of items — food, plastic bags, tins, glass, newspapers, cardboard, grass cuttings and more — into a black bin and putting it outside so that other people can take and empty it onto a huge mountain of refuse. Which is fine — if there weren’t so many people and the world was infinite and it didn’t cause problems associated with pollution.

So, how we view waste has to change — from something to be disposed of to a resource that creates jobs and economic activity. That’s precisely what South Africa is trying to do through its municipalities.

Let’s start with the problem. The department of environmental affairs says the country produces 56-million tonnes of waste each year. That’s about 2kg a day per home. The country is ranked at 15th in the world when it comes to the most amount of waste generated.

A quarter of that waste gets recycled and 15% gets incinerated. The rest goes into 9 000 landfills. A huge amount also ends up in the veld and in storm water drains, because it is being dumped illegally. This waste, and building rubble in particular, leads to flooding and sewage flowing out of blocked pipes and into rivers.

Where waste does get to landfills, those landfills are almost full. Johannesburg says its landfills will be full in the next six years. Like Cape Town, Durban and other big cities, it needs all the free space it has to be productive. Cities and towns can’t have bits of land that don’t make money, house people or help ecosystems function better. But, in all the metros, landfills rise up into the sky like diseased mountains.

An interim solution has been to turn the landfills into power sources. In eThekwini, the Bisasar landfill turns methane gas from the chemical reactions in the dump into enough electricity to supply 1 000 suburban homes. About 60 schemes like this already exist.

These have the bonus of reducing the harmful gases that come off landfills and harm the world by causing it to warm up.

But these power plants don’t solve the other problems that come with treating waste as something that goes into a landfill, which is why Johannesburg started a pilot recycling programme in 2009.

Selected suburbs received green and clear bags with their black bins. People could then voluntarily recycle.

But as of July, recycling in those suburbs is mandatory and it is being rolled out to other suburbs. A list of those is on the Pikitup website (pikitup.co.za). Many other major towns and cities have similar programmes.

But there have been teething problems. People often complain about bags not being delivered and of recycling trucks bypassing their neighbourhoods.

In some cases, the private sector has effective recycling programmes in place. Glass and plastic are recycled at rates comparable with the best in the world. It’s just difficult for these companies to get enough material to recycle because much of it goes to the dumps to be sorted. That’s why only a quarter of waste can be recycled.

With the goal of having zero waste going into landfills, getting people to separate waste at home is at the core of municipal plans. Doing that could create an entire economy and turn waste into a resource. 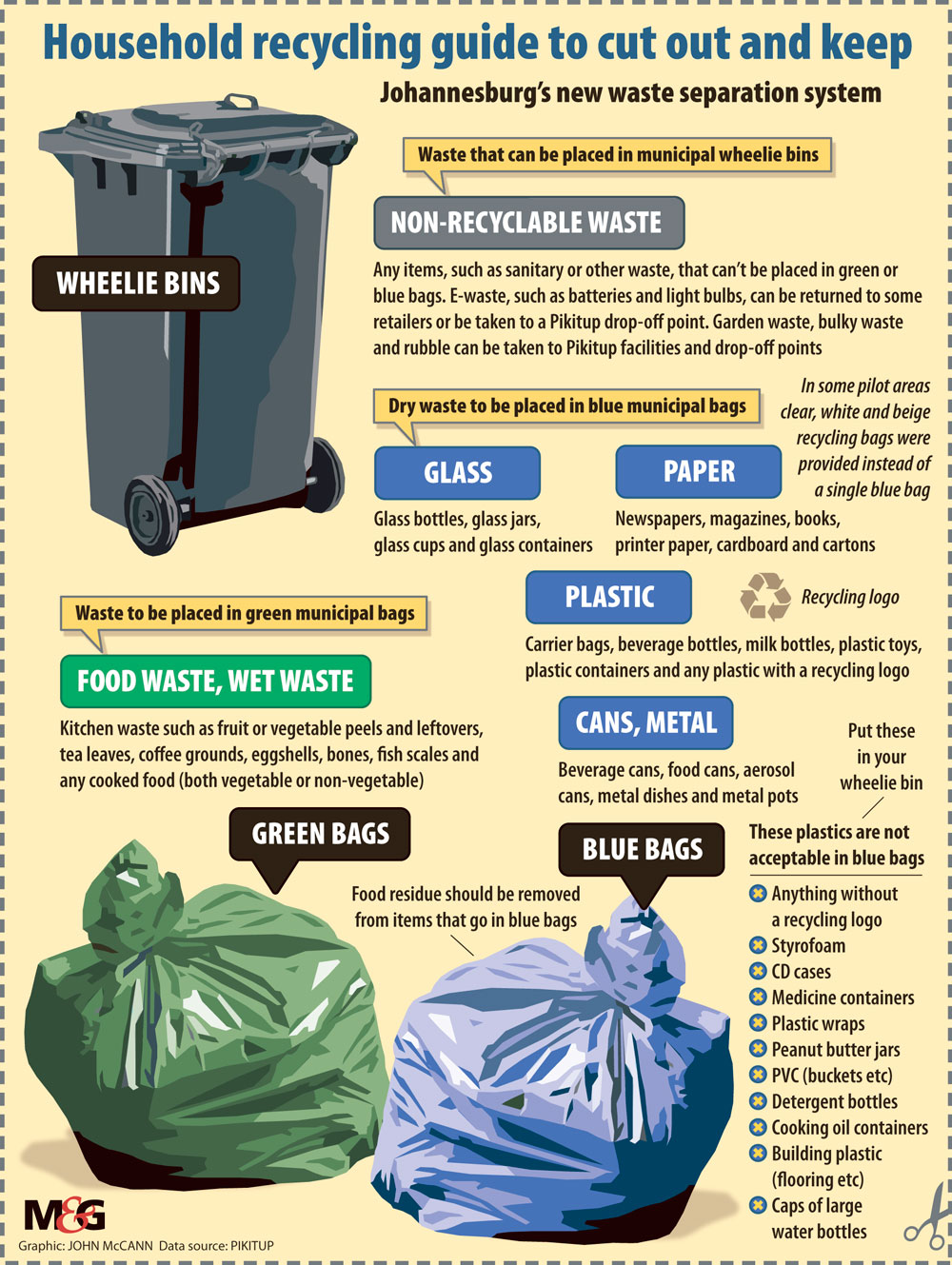 What to do with what

Anything from the garden: Take it to a municipal dump so it can be turned into compost and energy.

Alternatively, save money and turn the leaves, twigs, grass clippings and so forth into compost for your lawn, flower or vegetable garden. Get a compost bin in which you can leave the waste to break down.

Green bags: For everything that used to be alive — scraps of food waste from the kitchen. These can also go into the compost.

Blue bags: For dry waste — everything from plastic to cardboard and glass. Look at the recycling symbol on the bags for more information. Rinse all this waste so that it isn’t contaminated.

Rubble and other items from working on the house: Take these to municipal dumps. If a contractor is doing this, make sure it isn’t being dumped in the veld.

e-Waste: Things like batteries are incredibly hard to recycle, but some supermarkets and municipal dumps have places for this kind of waste.