Dying of the light: How Soweto lost its only hospice

The morning sun cuts through half-open blinds and filters into a deserted ward at HospiceWits, the Soweto branch.

Outside, the August wind chases dust around the property.

The rays illuminate a room with five single beds. Bright orange curtains — once drawn to give patients and their families privacy — are roughly knotted or draped over the rails around each bed.

Against the wall above a small porcelain basin, a frozen clock reads 12:40.

It’s been like that for more than a year. 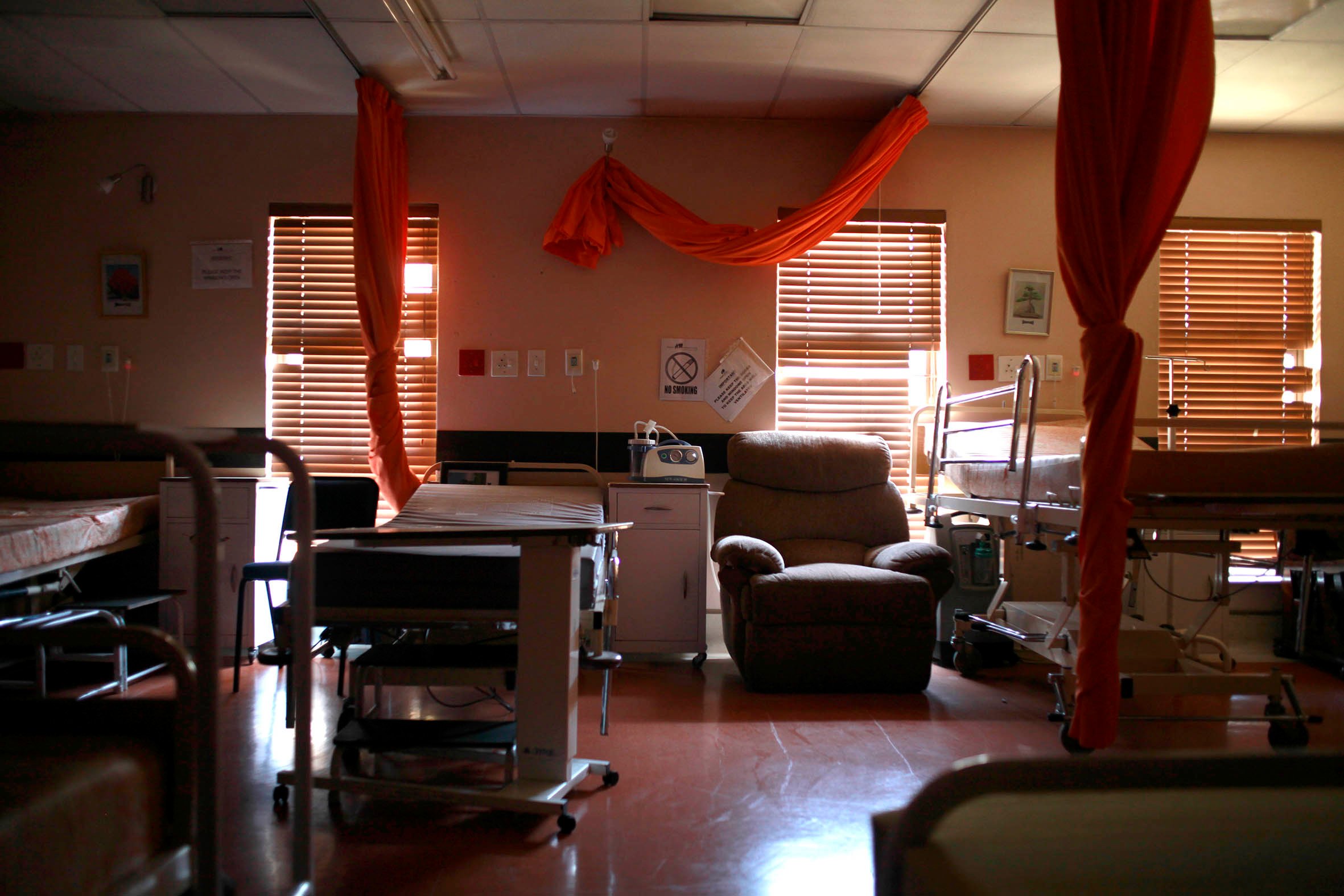 Hlengiwe Dikeledi’s footsteps echo as she leaves the empty 16-bed unit, which closed its doors in July 2017. She is the palliative care manager at the Soweto hospice

“We had to retrench more than 20 people,” she says, making her way back to her office. “Nurses, cleaners, cooks. Everyone had to go.”

Her office is a small room in what was once an eight-bed paediatric unit — a pastel-coloured paradise.

The walls are decorated with hand-painted songbirds and veld flowers.

Funding troubles forced the children’s unit to close a year before the adult ward suffered the same fate.

The Hospice Palliative Care Association (HPCA) and its member organisations provide more than 100 000 patients each year with palliative care, helping them to manage the pain associated with chronic or life-threatening illnesses such as cancer.

But palliative care is about so much more than what hurts physically: it also supports patients and families psychologically — and even spiritually — to cope with illness and die in a humane way.

Hospice workers mainly provide care in patients’ homes. But inpatient units such as this one south of Johannesburg are important for people who need extra help, for instance, who may be living with a number of illnesses and who rely on a multitude of hard-to-manage medicines.

For others, brief stays in hospices can give family members a respite from the 24-hour care many patients need, says chief executive of the HPCA in South Africa, Liz Gwyther.

But the Soweto hospice and over 50 other facilities nationwide were dealt a crippling blow when one of its biggest international donors, the United States President’s Emergency Plan for Aids Relief (Pepfar) reduced its funding by 40% in 2014.

Non-profit hospice services took off in South Africa in the 1980s, catering largely for people with cancer and HIV in the era before treatment.

As of March 2018, just over 4.2-million people in South Africa were on antiretrovirals (ARVs), according to a department of health presentation to Parliament.

But as more people start HIV treatment and live longer, the US government’s funding focus has gradually shifted away from in-patient hospice care towards improving HIV treatment. Aids-related deaths have dropped by almost 60% since the government began to roll out free ARVs in earnest in 2007, 2018 Statistics South Africa data reveals.

By contrast, the national cancer registry shows a 30% increase in cancer cases between 2010 and 2014. More than 60% of patients seen at the HospiceWits were there because of a cancer diagnosis. But after Pepfar support decreased, the township’s only hospice couldn’t raise the R5-million in annual funding to continue to treat patients at the centre, HospiceWits chief executive Jacqui Kaye says.

“To care for our patients, HospiceWits has to source R32-million in funding each year.” 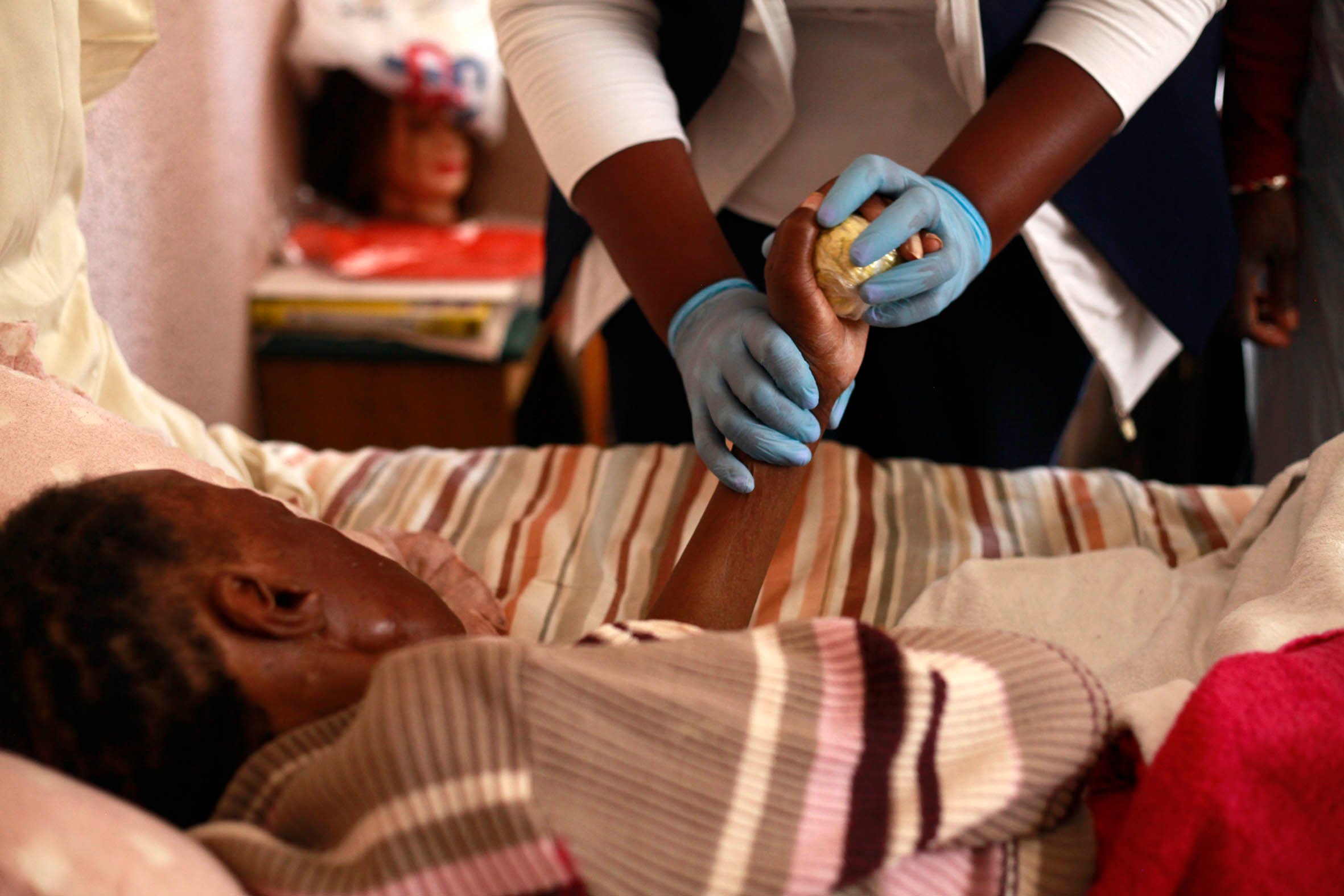 At the start of 2018, Ndimande was diagnosed with late-stage

Alzheimer’s disease, the last phase of a progressive brain condition that causes loss of memory and mental function, according to US nonprofit Mayo Clinic. The condition can also contribute to muscle deterioration, a 2010 study in the journal JAMA Neurology found. Ndimande’s muscles have begun to waste away. The lack of movement has also stiffened the muscles in Ndimande’s hands, leaving her in so much pain that she can no longer feed herself.

Three times a week, Dlamini tries to ease the agony, coaxing a little more movement out of the clenched muscles with special exercises.

When Dlamini isn’t there, Ndimande’s sister, Joyce, takes care of her — this includes helping her with these kinds of small exercises as well as bathing, feeding and turning her regularly in her bed to prevent bed sores.

She remembers the day her sister was no longer herself.

“In the beginning, she complained of severe headaches. Then, she started to tell me there’s ‘something moving in her head’.”

“Right now, she doesn’t even know where she is. Or who I am.”

Taking care of someone with a terminal illness such as Alzheimer’s disease can be debilitating for family members, Dlamini explains.

“These diseases cause a lot of stress. Some family members can’t handle watching a loved one get sicker every day. You know, sometimes, they don’t eat, or cry from the pain.”

She admits: “It’s difficult to watch.”

A 2016 study published in the European Journal of Cancer Care showed family caregivers — even those who had support from people such as Dlamini — reported having a lower quality of life than the general population.

But people who care for sick loved ones and get counselling and support from hospice workers are less likely to become depressed, a 2015 study published in the Journal of Clinical Oncology found.

Nurse Maria Malahlela believes Busisiwe — and Joyce — are just one of many Soweto families that are in dire need of the now-closed in-patient unit in Diepkloof.

Joyce sighs: “If they still had that unit, I would be so happy.”

Her voice breaks as she thanks the nurses for their help. “I don’t know what to say, they’ve helped me so much. With everything.”

Dlamini explains: You know it’s rewarding even to see the family members smile when they see us coming.

“Then they can relax. Even if it’s just for a while.” 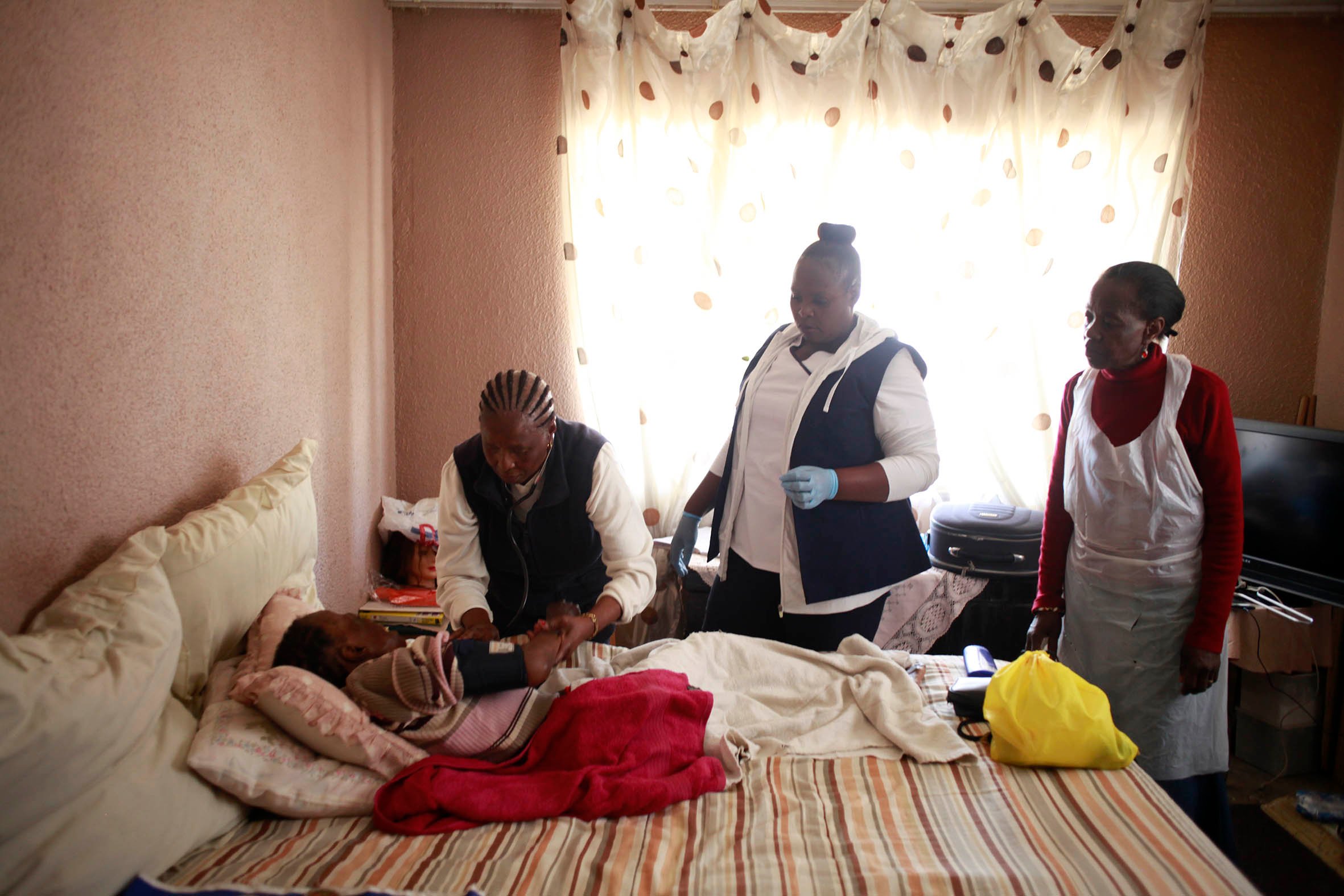 Under South Africa’s new palliative care policy, home-based care teams like these will be trained to look after terminally ill patients at home. (Oupa Nkosi)

Soweto isn’t the only community to lose in-patient hospice care as funding dries up. Eight-in-patient units around the country have been forced to close and several other hospices are on the brink, Gwyther warns.

“We anticipate significant money problems over the next few years.”

Shops selling donated goods, bring in just over R12-million per year for HospiceWits. But the rest must be sourced through government, trusts and donations. Gwyther says many corporate donors would rather fund education and social upliftment programmes than health initiatives.

And then there’s the stigma, Dikeledi argues.

Community stigma means some families are hesitant to send loved ones to in-patient care. In Diepkloof in Soweto, this meant the hospice had fewer than five occupants since 2015, Kaye says. Without the patient numbers, it’s hard to rally donors for support, Dikeledi admits.

“People are still afraid other people will find out that they could have stigmatised illnesses like HIV.

“They believe hospice is a place you go to die.”

A new national palliative care policy approved last year would help take care out of stigmatised facilities and into communities with local teams treating bed-bound patients in their homes.

Palliative care training will also be compulsory at the country’s eight medical schools. Most doctors are ill-equipped to provide this type of care, Gwyther says. “Doctors are trained to treat the illness, not the person.”

But Gwyther warns that there has been no discussion about how the plan will be implemented — or funded.

Gwyther says she has written to the health minister and the head of the palliative care steering committee and KwaZulu-Natal health MEC Sibongiseni Dhlomo, offering HPCA’s support in phasing palliative care into everyday running of the country’s health system.

Until then, hospices will be left to brave the competitive world of donor funding and more families will rely on the country’s struggling palliative care facilities.

Nonetheless, palliative care patients in Soweto are in good hands. Malahlela explains, still massaging Ndimande’s sore muscles: “We are so grateful to see the difference we can make in the community.”