SA watches as brokers fight it out

In the United States, brokers are waging a fight to the bone for customers. Their weapon is fees.

There are two main battles.

The first is among the passive funds that track various indices. Fidelity Investments recently made history by becoming the first company to offer two equity index funds with zero management fees. It beat bigger players in the US, such as Vanguard Group, BlackRock iShares and Schwab, to the punch. All had been involved in an intense price war to wrest index fund market share from one another.

READ MORE: How do I invest on the JSE?

The second is among online stockbrokers, which provide online trading platforms. JP Morgan has gone live with a new service that allows 100 free-stock trades a year. The move has “sent the world of online brokerages into disarray”, the Wall Street Journal reported on August  21.

The scramble has intensified because more Americans have come to rely on fees as a predictor of success. “The expense ratio is the most proven predictor of future fund returns,” says Morningstar’s Russel Kinnel in a comment piece. “That’s not to say investors should use them in isolation. There are many other things to consider, but investors should make expense ratios their first or second screen.”

The Mail & Guardian looked at the local investment scene. Are local online brokers shouldering each other out by undercutting fees? Are South Africans rushing to invest in the cheapest offerings, especially if this is a fairly good predictor of fund success (defined by Morningstar as surviving a period and outperforming competitors)?

One digital financial services provider, EasyEquities, is offering super-cheap prices in the hope of reeling in first-time and younger investors. The company charges 64c for R100 invested. “You won’t find cheaper,” its website claims boldly.

In South Africa, that is most certainly true. EasyEquities also requires no minimum investment amount and there are no monthly account fees. 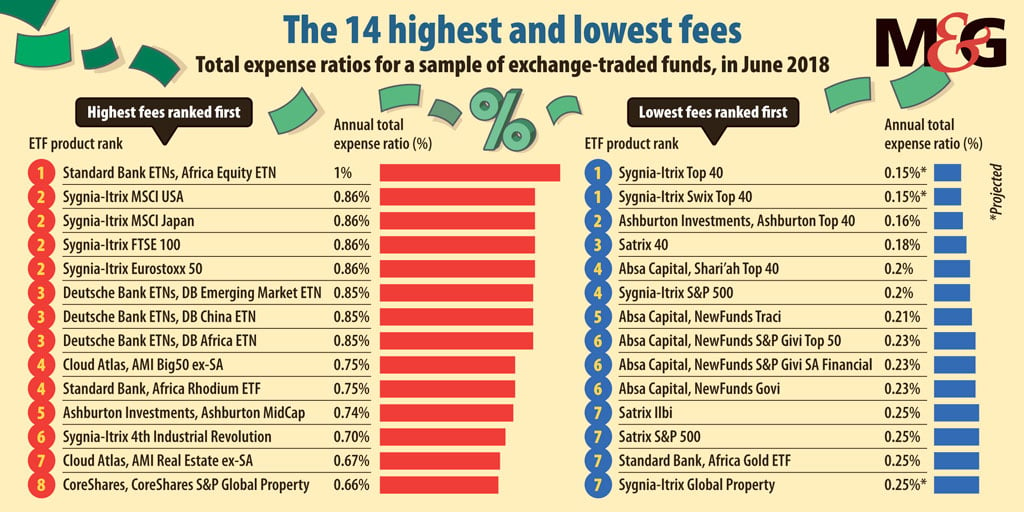 But, interestingly, the rest of the market has not scrambled to follow suit. Several online brokers have actually increased their prices in the past few years.

“Locally, we haven’t really seen a price war in terms of brokerage and minimums,” says Ben Collins* from stealthywealth.co.za. “Since EasyEquities launched, it is only really Absa that has come up with a low-cost offering, and that is for their exchange-traded fund [ETF] only account.”

The next cheapest stockbroking fee is R70 a transaction, offered by Nedbank Online Trading. This is coupled with a quarterly fee of R150 and commission of 0.7% for smaller amounts. It’s not uncommon to pay a rate of R99 a trade. Standard Bank Online Share Trading, for example, pairs this charge with a headline brokerage fee of 0.5%.

So there is no obvious, direct competition to EasyEquities.

Byron Lotter, a portfolio manager at Vestact Asset Management, says this has to do with the comparative immaturity of the South African market. “I think education and sophistication are a natural competition against fees,” he says. “The more people understand, the more they don’t just put their money into unit trusts or other high-cost products.”

Collins says even the cheaper companies “are still certainly making a profit, which does lead you to believe that the bigger, more expensive players certainly could reduce their fees if they wanted to. But there is currently no reason. My view is that the public’s general lack of knowledge, the commissions paid by these companies to financial advisers and the huge advertising budgets mean the clients will keep arriving.”

Trends show that as the market becomes more educated, there is a gravitation towards index funds. These baskets of funds, which aim to track the market rather than beat it, are able to offer lower fees because of the passive nature of investment. There are no analysts involved. Returns simply track the performance of the index.

In South Africa, the fees for these passive funds are significantly lower than those for active investment.

For example, Sygnia Asset Management, which offers several ETFs that track various indices — for example, the JSE Top 40 — claims to have revolutionised the savings industry by offering products with fees as low as 0.35% a year, excluding value-added tax.

Sygnia has seen some competition because of this, mainly from passive market incumbent Satrix, possibly hinting of things to come.

“Satrix recently lowered the total expense ratio (TER) [the most significant fee associated with ETFs] on their Top 40 ETF to just 0.1%,” Collins says. “There are offshore index trackers available for as low as 0.2% per annum. This was unheard of three years ago.”

But the price cuts haven’t been uniform. For example, one of Sygnia’s US indices charges a TER of 0.86%, the most expensive fee on the ETF market (see graph).

Still, even this is substantially less than what would be paid in an active investment fund.

Newcomer investment company OutVest (pioneered by Outsurance in the past year) charges fees of 1.5%, but the industry average for actively managed portfolios is between 2% and 3%, and it can be as high as 4%.

Lotter says index -tracking companies in South Africa do not yet need to compete vigorously on price because they’re still trying to take market share from the more traditional investment firms.

“We have seen new players come onto the ETF market,” he says. “When that becomes saturated, they will compete heavily with fees. Right now, they don’t need to compete
on fees because they are still competing for market share with the old-school unit trusts and the funds of funds.”

According to him, 95% of EasyEquities’ customer base is made up of first-time investors. They invest an average of R100 at a time.

“Our pricing model is about eliminating barriers so that we can ensure that there are no excuses for not investing,” he says. EasyEquities only keeps 25c of the 64c it charges. “The rest goes towards taxes and levies.”

But, with prices this cheap, is the company making any money?

The company has about 70 000 users, which, according to him, is on par with the top three largest brokers in South Africa combined, although it still has a long way to go to turn a profit.

“We have been much more ambitious than most. By backing ourselves to have a much higher break-even point, we were able to slash costs,” he says.

A small technicality: EasyEquities is not recognised by the JSE as a stockbroker but as a financial services provider.

The more traditional brokers, such as Nedbank Online Trading and Standard Bank Online Share Trading, are authorised to buy and sell stocks directly from the JSE. On the other hand, EasyEquities has established relationships with brokers, who carry out its trades. EasyEquities provides an interface.

To get the volumes it needs, EasyEquities has set itself up to appeal to the international market and its pricing reflects this. It has even recently started following the US trend by offering its “loyal” customers zero fees on some shares.

But there’s a payback: customers who want to qualify for zero fees must complete a monthly task, which ranges from referring a friend to completing (and passing) an “investing 101” course.

“There is a place for zero, but only where you’re creating long-term investment habits for yourself,” Savage says.

But the pricier products still have a place, especially for those looking for high-level or sophisticated investing.

“With the more expensive brokers, you generally get a lot more features. Some offer live pricing, the ability to place market orders instead of buying at the offer price and so forth,” Collins says.

Twitter user ETF Enthusiast says although EasyEquities is perfect for basic transactions, he has found “research and company information better at other brokers”. Another user says he loves the ease of the product and the low costs, but he “just wish[es] they had better performance tools”.

*Ben Collins uses this pseudonym when talking to the media