A plague of tiny beetles is tearing into our trees and killing them. The unprecedented crisis has led to towns, cities, companies and universities scrambling to find an urgent solution.

The innocuous-looking villain is the 2mm-long shot hole borer. An invasive alien species from Asia, the borer burrows deep into trees to create a nest for its eggs. It then secretes a fungus (Fusarium euwallacea) to feed its larvae.

The fungus feeds on the capillaries of its unwilling host and starves the tree of water and nutrition.

The first sign that a tree has been invaded is shotgun-like holes on the outside. Dark-red resin then starts to ooze from the holes.

In 2013, huge oak trees in Knysna — which had survived two centuries of fire, flood and drought — began inexplicably to crack and break apart. Large branches simply fell onto pavements, cars and buildings.

In nearby George, the municipality had to warn residents and tourists to “take a look at the tree before you walk, park, stand or picnic under it”.

Knysna responded with chainsaws, cutting the trees down and offering the chunks of wood to anyone who would take them. The municipality did not know then that with its minute, see-through wings giving it limited range, the beetle relies on humans to move it over any great distance.

This is precisely how an insect from Vietnam has been able to kill trees in California, Israel and now South Africa.

In Sandton, Johannesburg, mature trees started dying in early 2015. People chopping them down would often sell them as firewood in Soweto. Shot hole borer has now been found in some of the 250 000 trees that City Parks has planted in that suburb. They will start to die this summer.

In Lanseria, to the west of the city, beetles from Sandton firewood dumped there crawled into nearby oak trees and infected them too.

Nobody knew what was killing the trees. It was only by chance — and a year later — that Dr Trudy Paap from the University of Pretoria (UP) managed to piece the mystery together.

While doing a routine survey of diseases and pests at the National Botanical Gardens in Pietermaritzburg, she spotted the shot-like holes in a row of trees.

Dust around the holes indicated that something had drilled its way inside. DNA testing of the sap that was oozing out of the holes showed that it contained the same fungus found with the beetles in California’s trees. 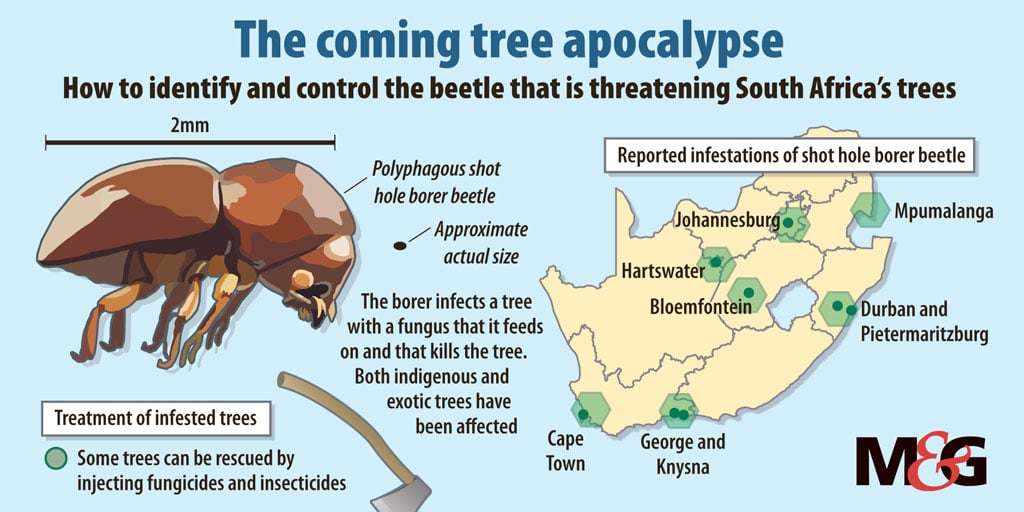 With the cause identified, a solution needed to be found. However, this is the first invasive species that is polyphagous, meaning it feeds off a variety of tree species.

Professor Wilhelm de Beer, also from UP, who is leading the research into a solution, says this makes it an unprecedented problem: “Normally, infestations go for eucalyptus or avocado. This goes for everything. We’ve never dealt with anything like it before.”

A particular problem is the fact that the borer is targeting the giant exotic trees that often grow in cities. This, too, has never occurred before.

It means trying to get everyone involved in tackling the problem, which in turn means many solutions and jurisdictional issues.

Just getting money to work out what to do with the beetle is a problem, says De Beer.

Research across sectors will have to be pooled to work out how to handle the epidemic.

A crucial step is an emergency declaration by the department of environmental affairs so that solutions can be fast-tracked — chemical or biological responses can be implemented speedily and controls tightened.

Nurseries will be compelled not to sell plants containing any signs of the pest.

In cities, some groups have taken to spraying chemical cocktails on affected trees. However, the insects bore too deeply to be affected. The spray is also potentially poisonous for humans, animals and other plants.

Best practice is to bring in the beetle’s natural predator. In this case, it’s a Vietnamese wasp small enough to enter the invasion cavities.

However, this needs to be done carefully so that those predators don’t become a problem in themselves.

Dr Guy Preston, at the department of environmental affairs, says the rate at which the beetle population is spreading is a real worry.

“We could see a situation where you need to cut down the big trees in the northern suburbs [of Johannesburg].” Pretoria’s purple-blossomed jacarandas could also go.

Out of the 80 major tree species in South Africa, 20 are perfect hosts for shot hole borers. For now, the only working solution is to cut down trees when they are infected and to burn the wood.

Homeowners are being told to cut dead trees into small pieces, seal them in plastic bags and place them in direct sunlight to eradicate the bug and its fungus.

Cities are also setting up dedicated dumps where infected trees can be chipped.

If this is not done and an alternative solution not found soon, history shows that shot hole borers are relentless.

They have hit the American state of California dramatically in the past five years.

While shot hole borers infect living trees, other borer species inhabit fallen ones. Whereas these would usually be killed off by cold weather in the winter, rising temperatures and warmer seasons have ensured the beetles survive and thrive.

The beetles’ savage destruction has had a knock-on effect; dead trees have fuelled wildfires as well as fatal landslides because there are no longer enough roots to anchor the soil.

The infestation in California has only recently been brought under relative control. By immediately cutting down infected trees, the state has brought beetle numbers down to a level where they have a small negative effect.