Our heritage is a successful civil society

Let’s imagine that aliens visited South Africa in late 1993, abducted a South African and then returned him or her home 25 years later.

The abductee might be shocked by how our democracy project has turned out — by all the changes we’ve gone through and where the country is today, in particular, politically. Among the things they would see as having largely maintained course in that time would be the role and effect of civil society.

As we celebrate our diverse cultures during Heritage Month, worth celebrating too is a civil society culture that has not only promoted cultural diversity but is also itself diverse, with a hard-won heritage of tirelessly fighting for the rights of the people in this country.

The collapse of apartheid was a success story of global and local civil society pressure against the apartheid government. In the 1980s, civil society organisations were mobilised and highly motivated to challenge the discrimination, repression and anti-democratic policies and practices of the state. 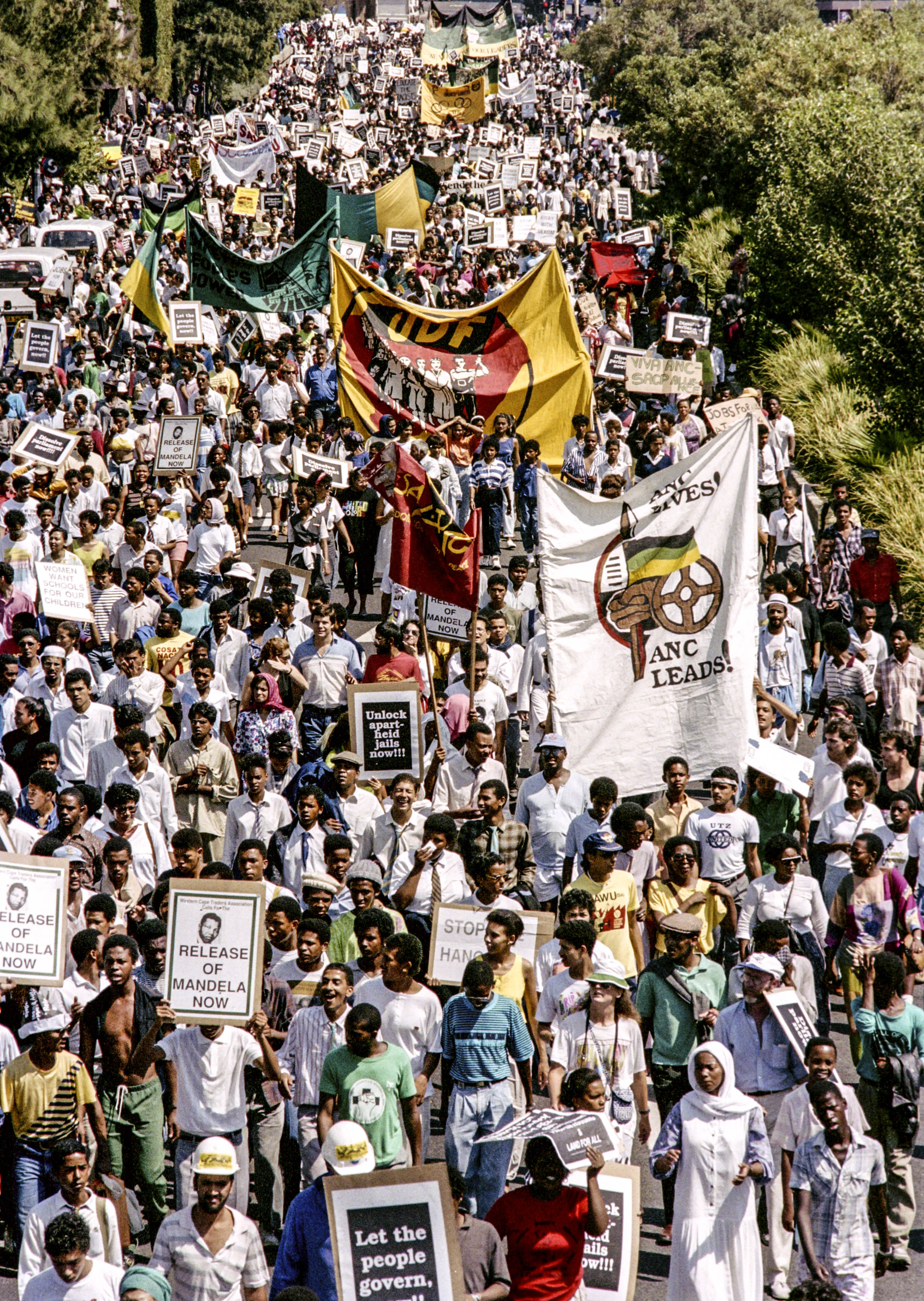 Anti-apartheid marchers demand the release of all political prisoners, ahead of the announcement by former president FW de Klerk that the ANC was unbanned. (Rashid Lombard/AFP)

Today, they find themselves still playing the role of pushing back against the state’s failure to adequately serve the interests of the people. In recent years, civil society organisations have increasingly become the last line of defence, fighting on behalf of citizens against corruption, failure to deliver public services and abuse of power by elected and public representatives.

South Africa’s civil society landscape is much more diverse, dynamic and assertive in holding government accountable, fighting corruption and supporting democracy and democratic institutions than in many comparable developing countries. There has been a dramatic mobilisation of civil society in South Africa, and across Africa, against poor governance, not seen since the fight against apartheid and for independence in Africa.

The ongoing judicial inquiry into state capture came about after widespread public condemnation of the effect of the capture of state institutions on the country’s integrity and demands for accountability — a campaign led by civil society organisations.

South Africa’s model Constitution provides a special place for civil society to play an oversight role of democratic institutions, monitor human rights and give citizens, especially the poor, vulnerable and excluded, the tools to know and assert their rights.

Civil society groups have, in the post-1994 era, continued to hold the democratic government to account. But upholding democratic rights has often come at a price. Anti-democratic elements in the ANC government have often frowned on civil society organisations and activists’ actions to hold government and leaders accountable, demanding they be proscribed and alleging they are fronts either for apartheid-era groups or foreign enemies.

South Africa has had three national and ANC presidents since attaining freedom in 1994. Two of them were forced out of power after intense challenges from civil society, demonstrating its power to bring about political change.

Former president Thabo Mbeki faced long-running civil society opposition for his refusal to make HIV treatment available at public hospitals, his perceived lack of consultation and marginalisation of critics. Mbeki’s critics in the ANC surfed the wave of anti-Mbeki mobilisation by civil society organisations to prevent him from being re-elected as ANC president at the party’s 2007 Polokwane national conference.

It was a group of civil society organisations that led a successful legal challenge in 2017 to stop the Zuma-led government from carrying out a nuclear deal with Russia that would have cost taxpayers trillions of rands and ultimately been disastrous for our economic future.

Again, ANC critics of Zuma leveraged civil society to campaign to prevent him getting his handpicked successor, his former wife Nkosazana Dlamini-Zuma, instated, and eventually forced him to resign as state president.

Organisations have pushed for the implementation of critical socioeconomic rights, such as the right to housing, health, food and social welfare, which have not been fully realised. In 2000, the Legal Resources Centre and a group of civil society organisations, in what is now referred to as the Grootboom case, successfully petitioned the courts to order government to provide housing “for people with no access to land”.

In 2016, South Africa aligned itself with African countries in the United Nations General Assembly to oppose the appointment of an independent expert on sexual orientation and gender identity by the UN Human Rights Council. But South African civil society organisations sent an open letter to the then minister of international relations and
co-operation, asking the department for South Africa to break from the conservative African lobby and adopt a pro-gay rights stance in line with the country’s democratic Constitution.

South Africa’s trade unions have ensured, with public campaigns, the adoption and entrenchment of basic employee rights, including the right to strike and minimum safety and working conditions for those in formal employment. The trade union movement played an instrumental role in securing the adoption of a minimum wage —even if the agreed minimum wage of R20 an hour is low.

Civil society organisations have also been holding mining companies to account for their failure to implement promises to build low-cost housing, boost local economic development and rehabilitate the environment in return for lucrative mining licences.

In 2016, civil society organisations, faith-based organisations and community organisations launched a series of protests against Lonmin’s lack of implementation of its promised building of low-cost housing, local economic development and environmental rehabilitation.

Civil society has provided public services in many instances of the failure by the state to deliver public services. Johannesburg Child Welfare, Cotlands, the National Institute for Crime Prevention, for instance, provide essential basic services, where the state is often absent.

Civil society organisations have also educated citizens about their rights — in a country with a huge illiteracy problem and where unscrupulous political, business, traditional and religious leaders have exploited the lack of knowledge of the poor to enrich themselves.

In spite of declining funding,civil society has largely stepped up to the challenge to defend the Constitution, democracy and its institutions. It has fought public and private corruption. They have helped to protect vulnerable citizens from government abuse by fighting on their behalf.

They have strengthened the capacity of the state by often providing alternative public services where the state fails. They have made alternative information available, where governments and leaders have either hidden or obscured the facts and they have fought to scrap apartheid-era laws, which deny democratic rights to citizens.

Civil society organisations have supported democratic institutions when these were being marginalised, corrupted and manipulated for selfish ends by some ANC leaders.

In a society in which large numbers of citizens are illiterate and politicians use the ignorance of citizens to enrich themselves, cover up their corruption or blame colonialism and apartheid for their own current failures, many civil society organisations have educated citizens about their rights. They have also held corporates accountable for abusing citizens, destroying the environment and for corruption.

Without active civil society organisations, the rollback of democratic rights in the past few years, the decline in the delivery of services to the public and rising corruption would have been worse.

But depriving civil society organisations of funding will increase corruption, poor governance and violence on the continent — which is likely to affect industrialised countries because of mass migrations of Africans to Europe in search of jobs, safety and peace.

It is hoped that the commission of inquiry into state capture will not be the last time that the South African public, supported and led by civil society, holds those in power accountable for wrongdoing that threatens their democracy.

It’s impossible to project where the country might be 25 years from now but we hope that civil society is still in the trenches in the battle to see that the interests of the people are served by government.

William Gumede is executive chairperson of Democracy Works Foundation, associate professor at the school of governance at the University of the Witwatersrand, and the author of South Africa in BRICS (Tafelberg)