On Saturday September 29, in the largest single demonstration of the year, hundreds of thousands of women in Brazil took to the streets to say “not him”. The him in question is Jair Bolsonaro, the neo-fascist candidate of the small Social Liberty Party, who is leading Brazil’s polls going into this Sunday’s election.

The mass protests were ignored by Brazil’s mainstream media, which instead focused on urging Brazilians to reject the supposed extremes of, on the left, Fernando Haddad and the Workers’ Party (PT) and Bolsonaro on the far right, who seem likely to face off in the second-round vote. In the face of mass unemployment, collapsing living standards, high crime rates (more than 63 000 Brazilians were murdered last year) and increased political violence, one can be forgiven for thinking the centre has collapsed. 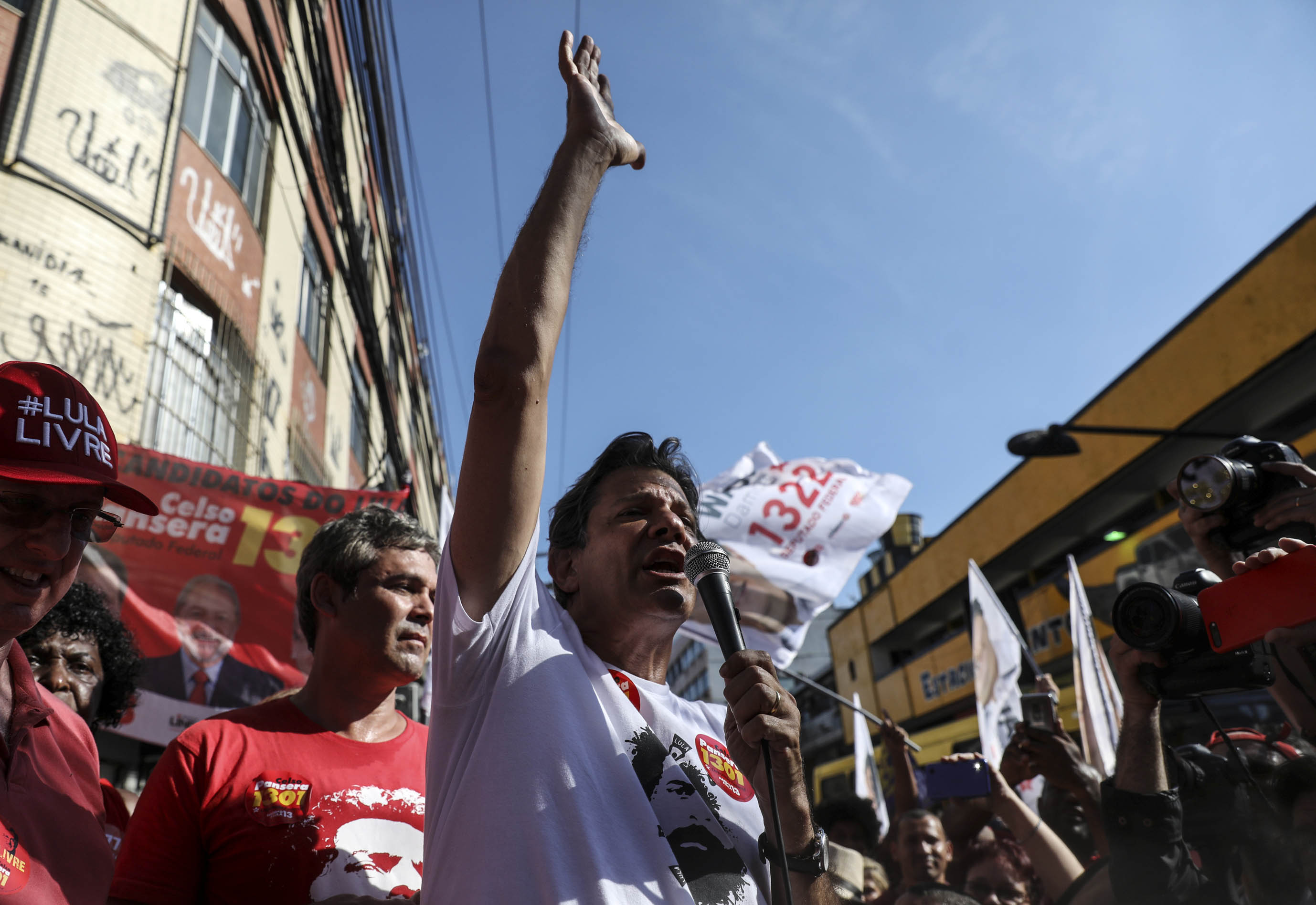 But, out of the front runners, there is only one threat to Brazilian democracy and he is the 63-year-old former army captain and Rio de Janeiro congressman, Bolsonaro. He and his supporters, including senior active military officers, have openly stated that they will not accept any other result in this election than a Bolsonaro victory and there is open talk of a military coup, which cannot be dismissed as idle chatter. The simple choice in this election is between those who want to preserve democracy and those who don’t think it is worth saving.

The word “fascist” has been reduced by over usage to a simple pejorative, used to end arguments or label somebody beyond the pale rather than to describe a distinct political phenomenon but Bolsonaro is a neo-fascist — there is no getting around it. Unlike traditional fascism, “Legend”, as his supporters dub him, doesn’t have a mass movement behind him and he is committed to an extreme version of neoliberalism. Bolsonaro represents a dark spirit of violent reaction that has arisen from the process that impeached Dilma Rousseff after right-wing anti-corruption protests.

Although some label him a cultural warrior or compare him with United States President Donald Trump, this is wrong. Trump prizes his “deal-making” abilities above all else but Bolsonaro promotes violence as a solution to political problems. In this he is something akin to a Brazilian version of Filipino President Rodrigo Duterte, who also advocates extra-judicial murder.

Bolsonaro and his brood of large and unintelligent sons openly celebrate the brutal military dictatorship that ruled Brazil from 1964 to 1985, even if he chides it for not killing enough people. He champions violence against Brazil’s internal enemies — the feminists, the communists, the faggots and the indigenous and Afro-Brazilian people. What is needed to fix Brazil’s crisis, his supporters insist, is a strongman located outside the corrupt and broken political system.

Bolsonaro stands for the militarisation of the state combined with extreme free-market policies championed by his economic adviser, Paulo Guedes, a Chicago School economist and former member of Chilean dictator General Pinochet’s economic team, who promises to privatise everything.

Bolsonaro’s pro-market rhetoric and virulent anti-leftism means that he is the darling of much of Brazil’s business community, which presumably has no problem with some of Bolsonaro’s open bigotry, such as celebrating the torture of Rousseff, or claiming that a congresswoman was too ugly to be worth raping, or insisting he would rather have a dead son than a gay son.

If elected, he will try to increase the number of Supreme Court justices, packing it full of his supporters, always one of the first steps in establishing a dictatorship.

Bolsonaro’s running mate, General Hamilton Mourão, has openly stated that he would lead an “auto-coup” to ward off “anarchy” and that Brazil needs a new Constitution written without democratic oversight.

Bolsonaro has been able to escape public scrutiny for his open hostility to democracy and has been treated with kid gloves throughout the campaign by a media trained to attack the left and celebrate upstanding citizens, such as white former military officers like Bolsonaro. He doesn’t even need to campaign following his near-fatal stabbing by a deranged conspiracy theorist at a public rally last month.

How then does Haddad, a technocratic university professor and former pro-business mayor of Brazil’s financial capital, who is best known for building bike lanes, running on the ticket of a party that balanced macroeconomic orthodoxy with innovative social policy that lifted millions out of poverty, become the mirror image of a fascist threatening a military coup?

Imprisoned former president Lula da Silva, who would win the election if he was allowed to run, is also no radical.

If anything, the scenario mirrors the last French elections when the country rallied behind the candidacy of Emmanuel Macron to ward off Marie Le Pen’s extreme-right Front National. But the difference in Brazil is that a large section of the elite and middle class seem to prefer fascism to moderate reformism and democracy.

Will the same international leaders rally behind Haddad in the second round to protect democracy and human rights? This is by no means certain because, after all, most of them either ignored or supported Rousseff’s impeachment, which brought about this mess in the first place.

In much of Latin America, including Brazil, the Cold War didn’t end with the fall of the Soviet Union. The Brazilian left, following the rise of the PT and its trade union and social movement allies, had gained new relevance and power during the final years of the Soviet bloc.

Beginning with the election of Hugo Chavez in 1998 in Venezuela, centre-left governments rose to power across the region. As a result, the violent anti-communist ideology that killed hundreds of thousands during the Cold War had an afterlife.

Violent anti-communism is alive and well, even if communism isn’t. For the right, the moderate social democracy of the PT is akin to the worst excesses of Stalinism and Lula is the leader of a conspiracy with Cuban and Venezuelan backing to destroy Brazil. These conspiracies are spread by word of mouth and WhatsApp groups among Bolsonaro’s supporters, although it is not too different from some of the more hysterical anti-PT journalism in the mainstream media.

Anti-communism is also entwined with anti-corruption politics; corruption functions as a catchall phrase for hostility to the PT’s social policies. Even these relatively moderate social policies were interpreted as upsetting the natural order — an alleged “meritocracy” — by lifting up the supposedly undeserving poor. Right-wing media cast social security as “bribes” to the poor and working class.

The centre-right, led by the misleadingly named Brazilian Social Democratic Party, thought they would ride this wave of anti-PT sentiment to power but instead they find themselves isolated and discredited after supporting the impeachment of Rousseff (indicating they don’t value democracy) and propping up current President Michel Temer’s discredited government.

In this environment, the centre of Brazilian politics is about preserving Brazil’s 1988 Constitution, warts and all — in other words trying to maintain democracy. This is what the PT and the candidacy of Haddad represents. In a moment of historical irony, the PT, once a radical force against the establishment, is the major party trying to preserve a Constitution that they opposed at the time.

The supposed (mostly white) respectable citizens of Brazil are flirting with fascism. If Bolsonaro is defeated, it will be the result of a widespread rejection by Brazil’s untouchables — in particular the poorer and blacker citizens of the northeast and women. Let’s hope, then, that it is they who make sure it is not him who wins Brazil’s elections.

Benjamin Fogel, based in São Paulo, is a PhD candidate in Latin American history at New York University and is a contributing editor for Jacobin magazine and the website Africa is a Country