For many, the answer lies in reading the newspaper, watching the news on television or tuning in to talk radio shows.

An alternative way to gauge how far the country has come is to look at texts that represent the sentiments of that time. For 1994 we could read Mongane Wally Serote’s volume of poems, Come and Hope with Me, and the television soap opera Generations.

We could take it a year further to 1995, the year Arthur Mafokate released his song Kaffir and the year Zakes Mda’s stage play, You Fool How Can the Sky Fall, premiered at the Windybrow Theatre in Johannesburg.

The play takes a satirical and almost absurd look at how the leaders of a fairly new democracy can mess up and turn the state into a dictatorship. The characters area panicked Cabinet of ministers deluded by power and nursing a corruption hangover.

Twenty-three years after its first run, You Fool How Can the Sky Fall is back to offer the audience the opportunity to reflect on how much and how little has changed since the 1994 democratic elections. This time, the 90-minute production has James Ngcobo in the director’s chair.

Last week, a small crowd trickles into the Market Theatre’s foyer, leaving a wet trail of footsteps. Some shake their umbrellas while others walk in with hunched shoulders and wet clothes. By the time we take our seats, the crowd has replaced their dampened mood with whispered expectations and questions.

How does a quarter of a century change a production? Does it hold the relevance it held at its debut? Shouldn’t we be creating new work instead of rehashing archived work?

An off-white flag is hoisted into our view. It reads: “The flag of that country” and serves as the first step to transport us into a context that is bigger than, but not outside of, South Africa. 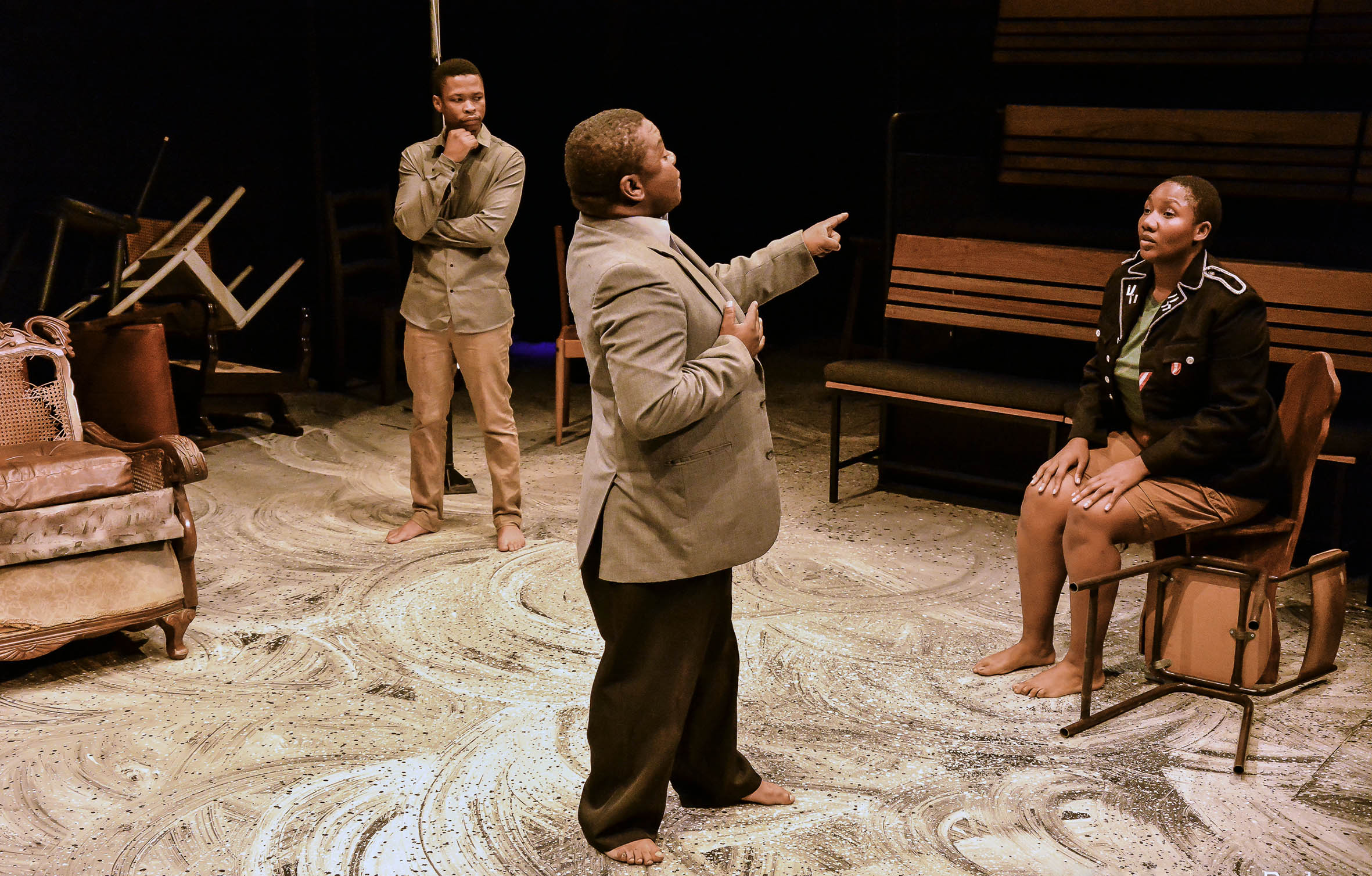 With a dilapidated sofa in the centre of the stage, sand carpeting the floor and chairs and stools hanging from the ceiling,the set is designed to depict a gloomy cell in a fictitious African country which a group of people claiming to be members of the Cabinet are being kept in custody. The ministers and their president are either being held after a coup or are serving jail time for their self-serving fraudulent ways. The date is not known.

We see the Cabinet members,dressed in tatters that clash with their high status,fearfully pacing and anticipating their call to confess.

The interrogators in the confession chamber stop at nothing to draw the truth from them. All the while the ministers continue to pledge allegiance to their president, the Wise One, played by Molefi Monaisa. 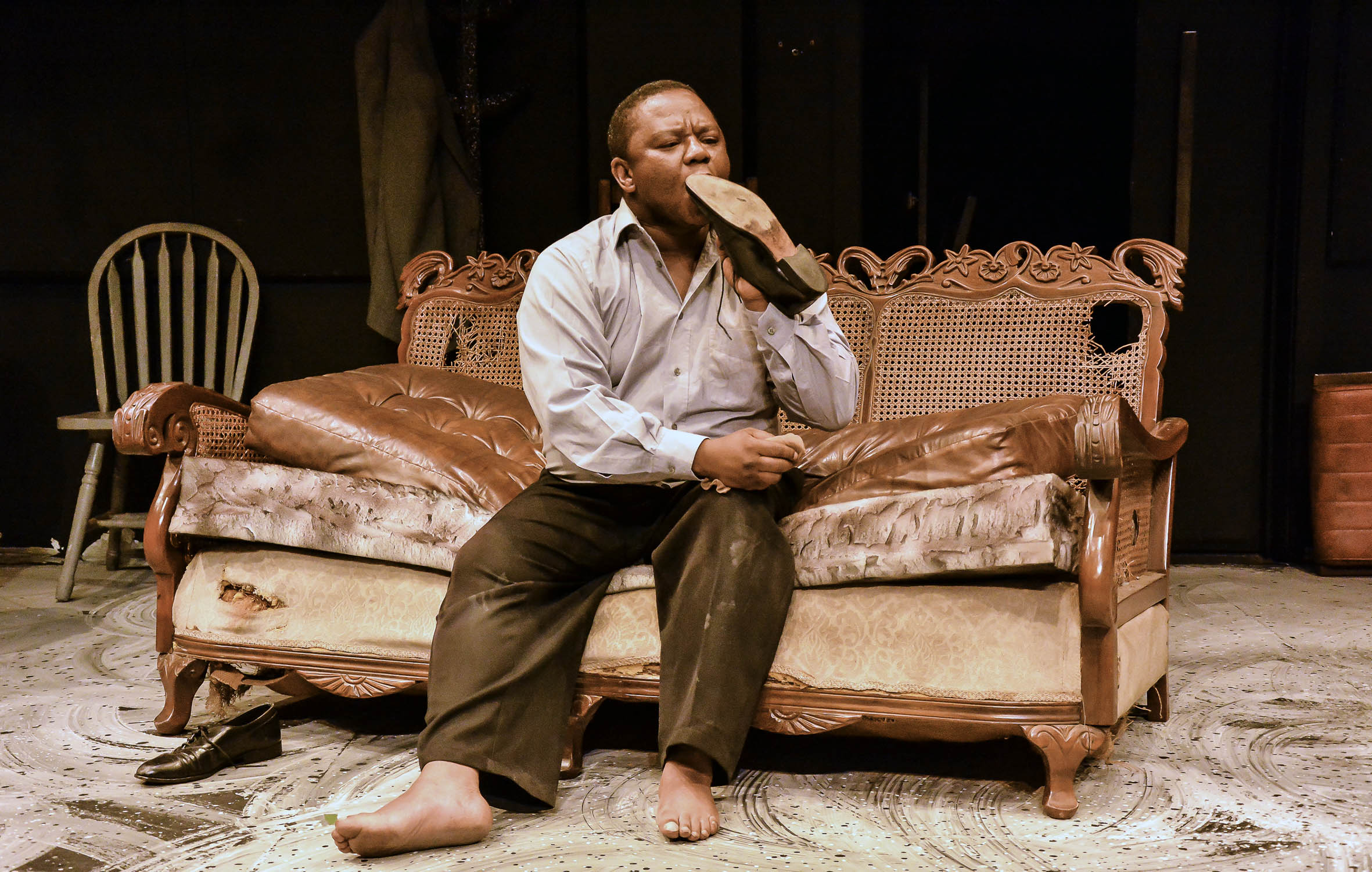 The President (played by Molefi Monaise) can do no wrong in the eyes of his ministers — until he’s no longer the leader. Photos: Iris Dawn Parker

Depending on the circumstances, Monaisa mimics various former leaders such as Nelson Mandela, Thabo Mbeki and Jacob Zuma. Perhaps this works to suggest that You Fool How Can the Sky Fall is mirroring or warning against the consequences of the pretentious, chameleon-like leaders behind some democracies.

But the play also asks the audience to consider the pressures that come with being expected to pioneer a democracy. We slowly see that the ministers’ worship of the president comes from an eager need to be led or to avoid taking responsibility.

The theme of ambiguity runs throughout the play. Theatre gives Ngcobo an opportunity to do this, because there is room for things to exist on a continuum. In an interview with eNCA, Ngcobo suggested that You Fool How Can the Sky Fall discourages the audience from being passive spectators. Instead, the uncertainties push the viewers to reach their own conclusions.

Another challenge the play poses has to do with Ngcobo’s casting choices. Apart from the president, all other roles are gender switched. Actresses Linda Sokhulu, Moliehi Makobane, Nthati Moshesh, Pulane Sekepe and Zola Nombona play the roles of men, and Zenzo Ngqobe, who plays the minister of health, is addressed as a woman and is often referred to as a princess.

What makes this fascinating is how the actors do not try to remain in the gender mould of their characters. Instead, Ngqobe wears his princess label with a masculine nature whereas the women carry out their roles with a feminine disposition. Even though this may confuse the audience, it works to draw them in past gender binaries.

After some time in the cell, the Cabinet members’loyalty to their leader unravels and his reign ends.

In between laughs and cheers for the compelling performance, it is hard not to think about the current state of South Africa’s politics. The current adaptation is not too far-fetched from the many rise-and-fall cycles in the post-apartheid Cabinets of the country. Perhaps we do have a long way to go.