Artist Florine Demosthene’s aesthetic has evolved, in part, from the restless nature of her practice. Over the past decade, the Haitian artist has produced art from locales such as New York (where she grew up), St Croix in the Caribbean, Ghana, South Africa and Benin.

It was in St Croix, for instance, while trying to give voice to her disgust for the disorienting Jim Crow politics that characterise aspects of the island’s life, that she came upon the idea to reference her physique in her work. The resulting work became The Capture, in which a figure tethered to a pier appears to float in grey skies or under foggy water. An inscription in block letters, obscured by the large figure, reads something to the effect of: “You have to go because I don’t want to see your face in front of the white people.”

The work was inspired by a segregated beach. Charcoal and ink splotches make the image gloomy and grey.

Demosthene has worked in a similar style for several years.

“You look at someone like Frida Kahlo; her work has been mostly about her life,” she says. “I have been reluctant, as a black woman, of diving into that pool. That pool is very murky. In a way, you are almost forced to choose a polarity and I didn’t want to choose. And then it’s my size, and my size references so much history, especially American history.”

Because of that reluctance, Demosthene tried to hone the style to create some distance between the representation of herself and her actual self.

Delving into her style’s evolution, Demosthene explains: “Because I knew I wouldn’t always be living in the US, I had started to use Photoshop as a set-up and working from that.

“The work began just as drawings, and not always having it be like something on paper. I was trying to find a way to manoeuvre through drawings. I was working with cyano types. So I would do drawings on like grafting film and then expose them to this old photographic technique, which, essentially, was like blue printing.

“So while the drawing is like a real- world idea of what you want, these cyano types became like some other inner world exposing another layer. It was interesting layering the two, but these were the early works.” 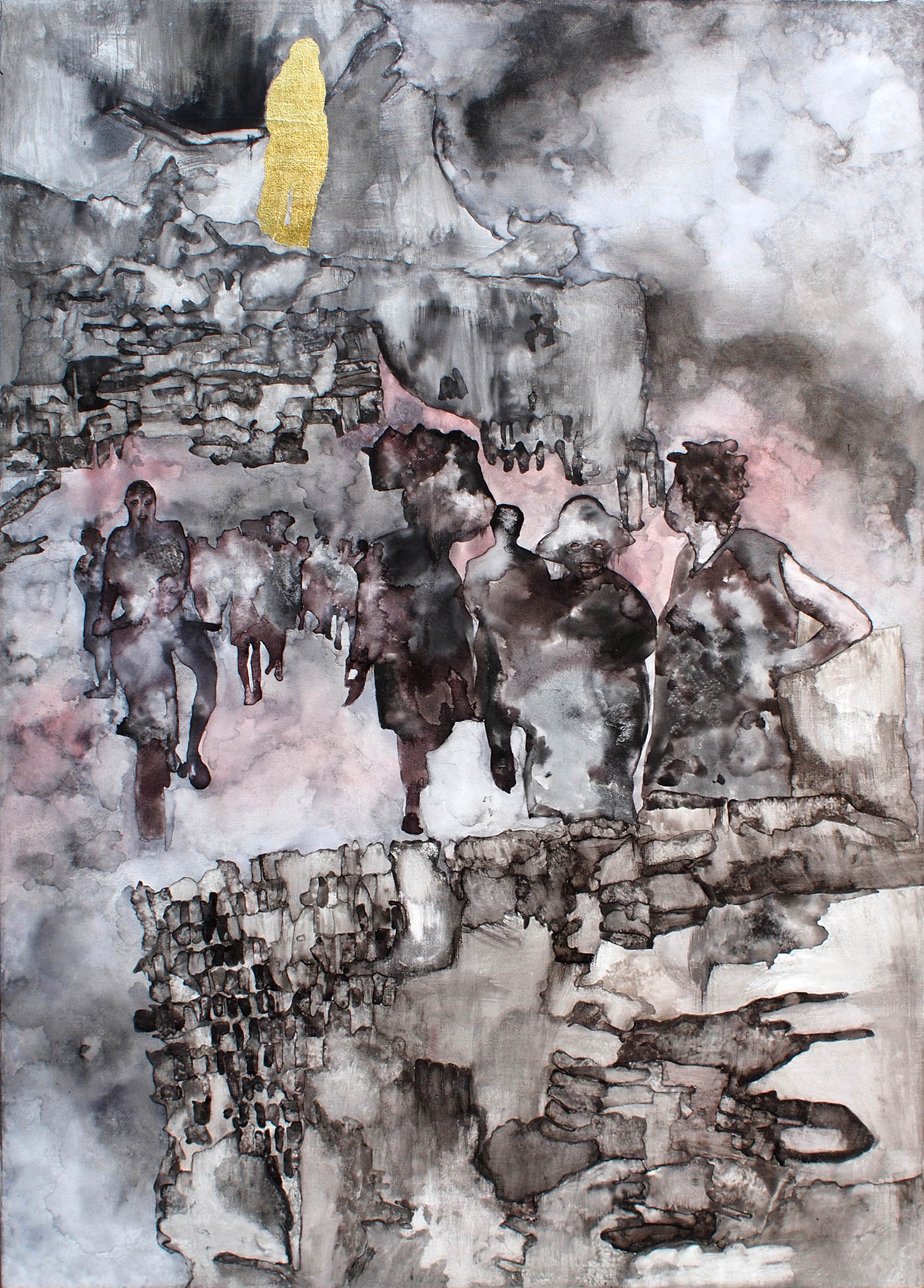 Flashback: Be Still and Know, in ink, charcoal and oil bar, is part of the series called The Burst by Florine Demosthene

“When I got to Ghana, it was, like, now you’re going to have to figure out how to manipulate those drawings with what you have, which was mostly inks at that point. So I had to manipulate inks on this drafting film and was pushing this technique as much as possible and trying to work through it.”

There was a similar incident in which she discovered the aesthetic effects of rubbing alcohol, which accidentally spilled on one of her works.

Over time, The Capture evolved into a body of work exploring her own physicality and the fine line “between stereotype and representation and our comfort with derogatory images”.

In different parts of the diaspora, Demosthene continued experimenting with the black female form, its relationship to location and social constructs, developing a framework for “an African heroine that is outside of this Marvel Comics or DC Comics type thing. What would that be? As these superpowers started moving through your body, what would that look like?”

The figure that dominates the work titled Consumed seems to refer to this very idea, perhaps inverting it. It can be read as a commentary on the Haitian earthquake of 2010, depicts a figure clinging to life amid what looks like the rubble of collapsed buildings. The figure, blotched pink and grey and black, evokes physical trauma and a sense of pathology. 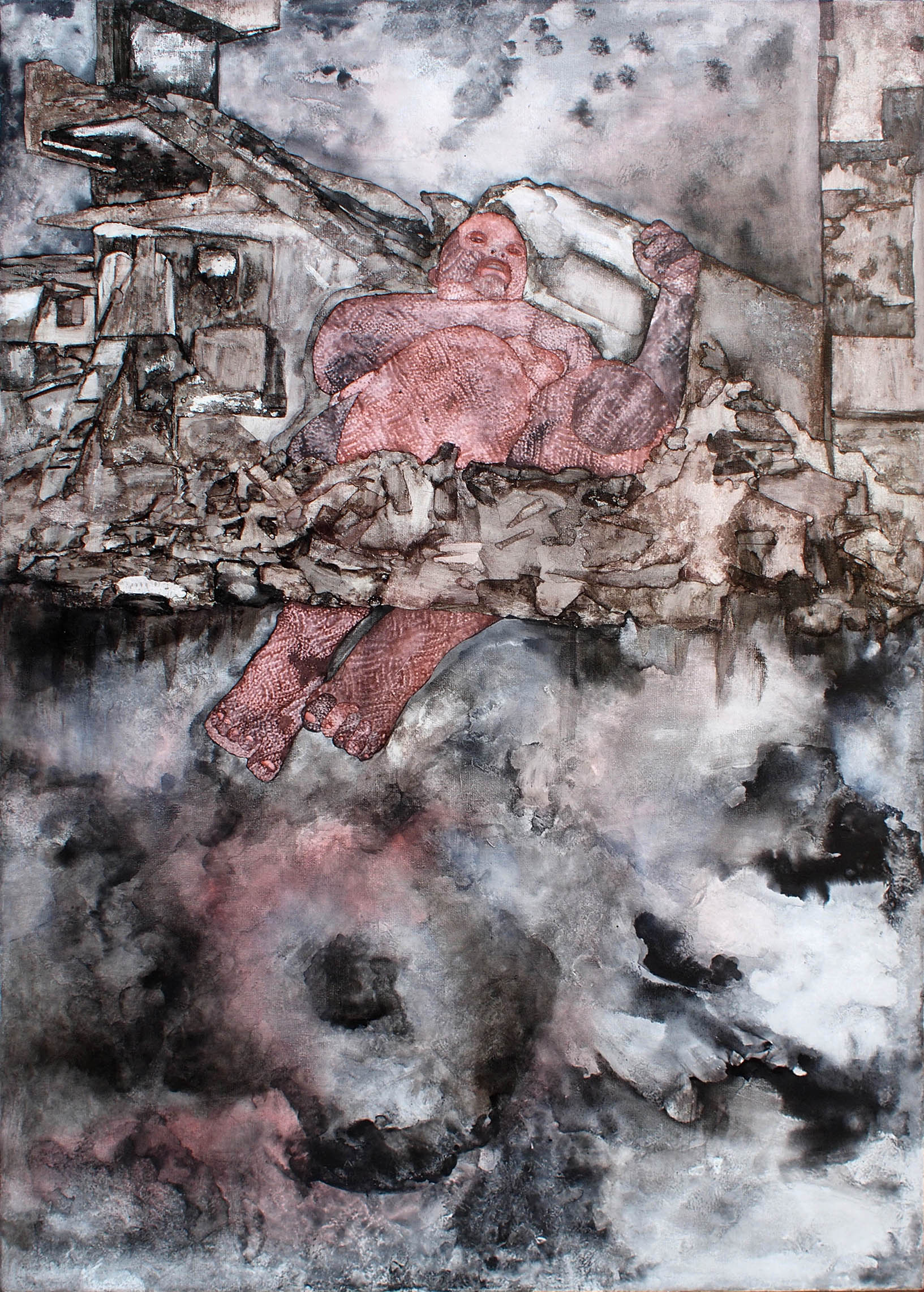 Consumed depicts a figure clinging to life amid rubble

There is no permanence to the ground it emerges from, which looks as if it gives way to an otherworldly dimension. The earthquake ceases to be literal, showing instead a resilience and resourcefulness in the face of a tragedy she believes to have been manufactured by a gluttony for the natural resources of her country.

She spoke of an oil-extraction technique practised on the side of the island nearest to Cuba that “has been known to cause earthquakes”.

Looking at the figure depicted in Consumed now, one can see it clinging to life, almost animated, summoning powers contained in Haitian proverbs. One commonly used translates as “go and make your way”, and another can be read as “behind a mountain is another mountain”. She rallies against the stigma of her national identity, not only creating a distance from her physical self but also forging a new diasporic mythology.