Love & other drugs: Men could make all the difference in keeping your baby HIV free

Ntana Mhlongo, 31, looks down shyly as she describes her partner Zakhele Sibiya. Despite her efforts to hide her face, a smile lights up her features.

“He loves the children. And he loves me,” she says, smoothing her black lace dress over her knees.

The pair have been together for four years.

Mhlongo is seated in a near-empty room of her Buffelspruit home in Mpumalanga. Outside, her children are playing in a patch of golden afternoon sun. The youngest of the bunch, four-month-old Pearly, is sitting on her older sister’s lap.

Pearly is Mhlongo and Sibiya’s first child together. He is the only boyfriend she’s had who supported her during and after her pregnancy. Ntana has four other children. “When the others found out I was pregnant, they ran away.” 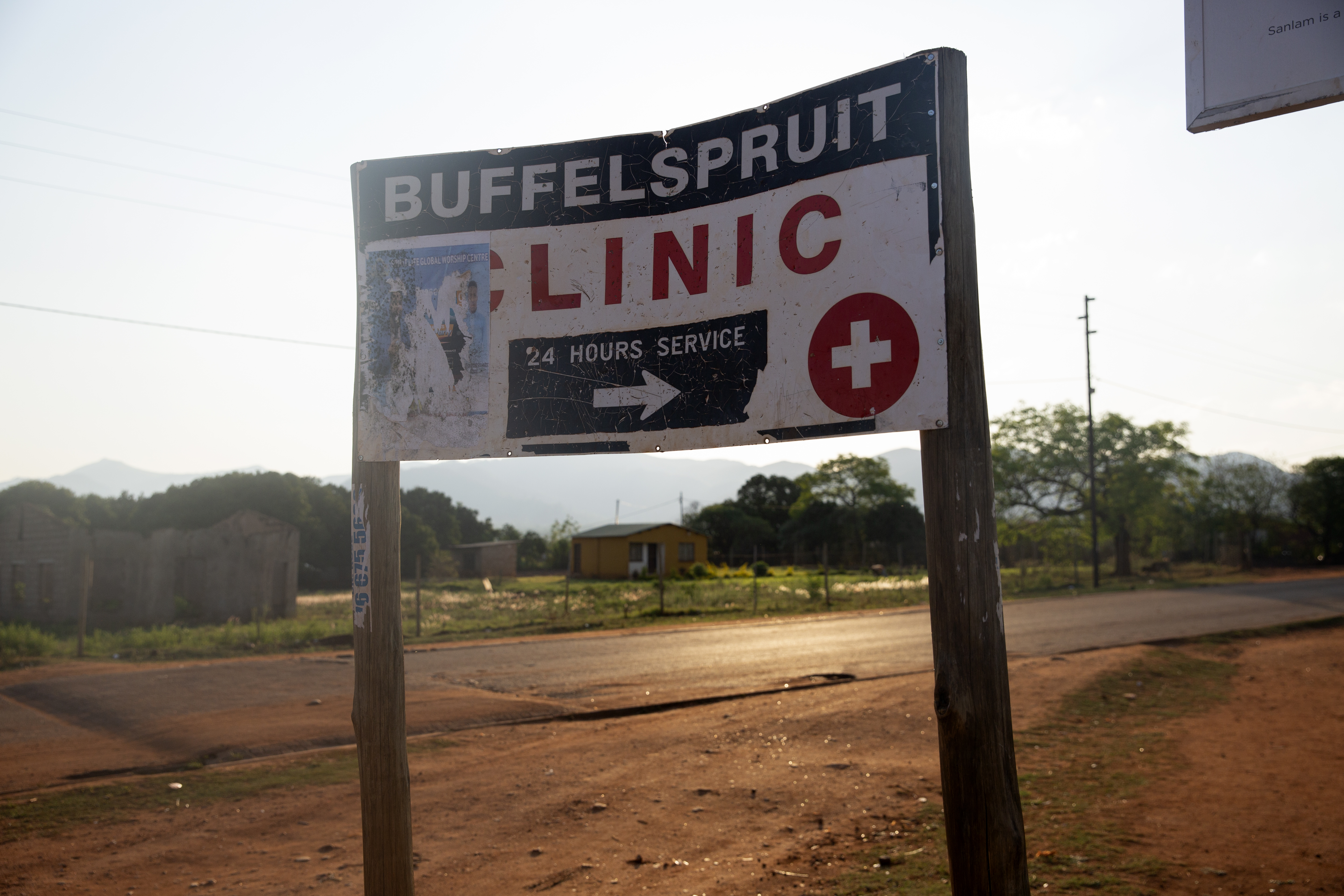 While Mhlongo was pregnant with Pearly, she got her HIV medication from the local clinic, a stone’s throw from her Buffelspruit home. (Dylan Bush)

She looks down at her youngest daughter. “Pearly is the only one I’ve been able to feed with breast milk exclusively,” she says.

For many HIV-positive mothers, particularly those who are not on effective HIV treatment, feeding their babies breast milk only for the first six months of their lives is about far more than just personal choice.

When a mother is HIV-positive, her breast milk will contain the virus and can be transmitted to her baby through the milk. But studies have shown that exclusively breastfeeding for the first six months of an infant’s life — giving the baby nothing but breast milk, not even water — can help to reduce the chances of a mother transmitting HIV to her child.

Researchers have found that mixed feeding can damage the thin lining in their babies’ intestines, making it easier for HIV to enter their bloodstream.

If the mother is on antiretroviral therapy (ART), though, the chances of her transmitting the virus through breast milk become almost zero, studies have shown — but only if she’s “virally suppressed”. In other words, only if she’s using antiretroviral drugs correctly and consistently — each day at the same time — and tests have shown that the drugs have reduced the amount of HIV in her blood to such low levels that it has become scientifically impossible for her to transmit the virus.

Mhlongo tested HIV positive in 2010 — one year before the birth of her fourth child, Jacob.

She started to use antiretroviral drugs soon afterwards, and became virally suppressed. Seven years later, by the time she gave birth to Pearly, she knew that, even if she did mixed feeding, the chances of her baby contracting the virus from her breast milk were almost nonexistent because she was still virally suppressed.

But, because breastfeeding also has a multitude of other advantages, she decided to breastfeed her baby exclusively. Studies have shown that breastfed babies are less susceptible to diseases such as diarrhoea and pneumonia. Breastfeeding can also prevent babies from becoming obese later in life and protect against diabetes, a 2016 study published in The Lancet showed.

Breastfeeding a baby exclusively for six months, however, has even more advantages.

Mixed feeding doesn’t only make it easier for HIV to enter the bloodstream, it also opens up the way for infections such as pneumonia, explains head of the Health Systems Research unit at the South African Medical Research Council Ameena Goga.

“Breast milk has everything that a baby needs in the right quantities in an easily absorbable form.” 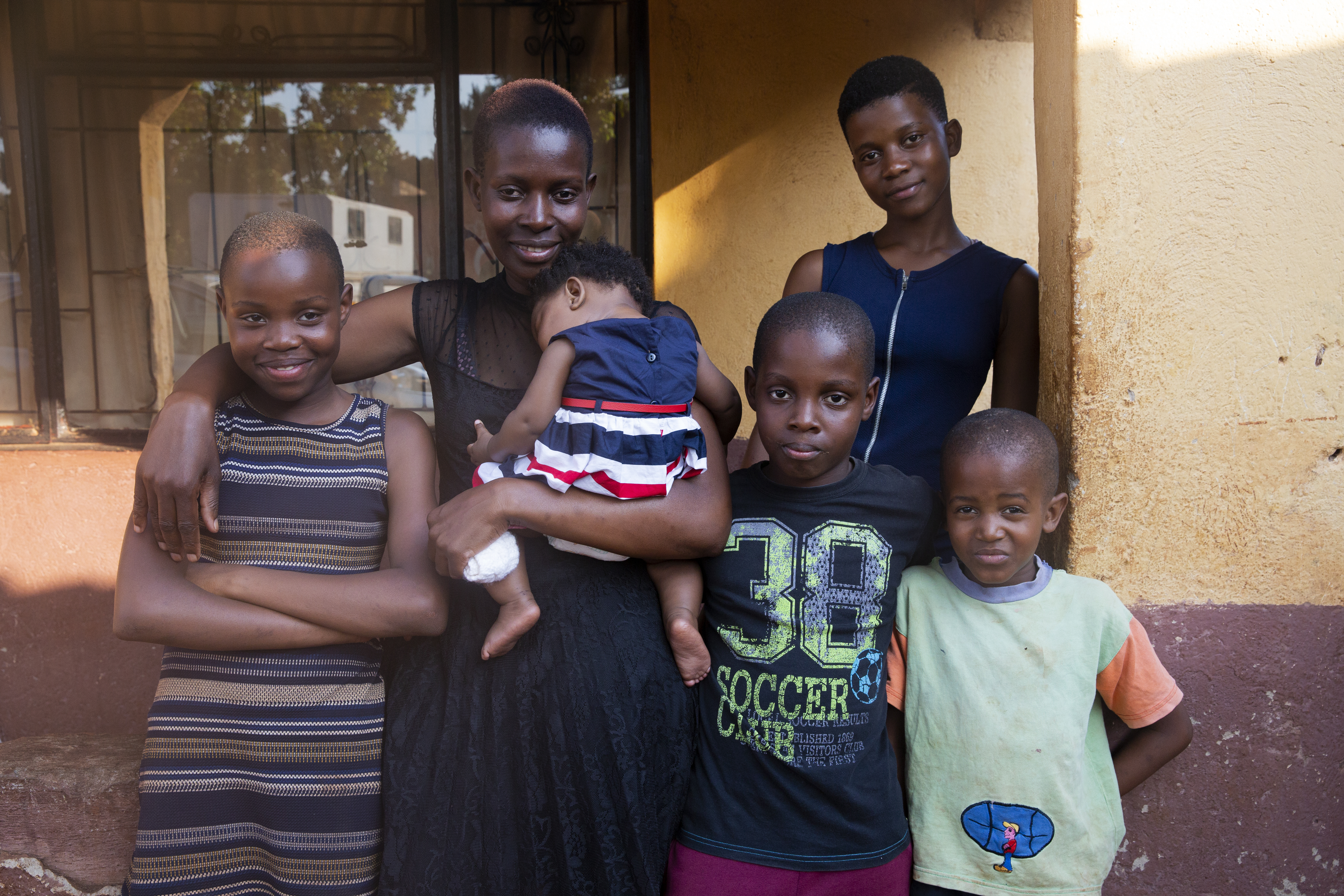 Mhlongo tested HIV positive in 2010. All her children are HIV-negative. (Dylan Bush)

Between 2001 and 2011, South Africa told HIV-positive mothers to feed their babies formula milk only in their first six months to avoid transmitting the virus, according to the 2017 South African Health Review.

But this created a host of problems. Formula milk was expensive and unaffordable for many parents. And, although the government provided free formula milk for HIV positive mothers who breastfed, clinics often ran out of stock, or mothers couldn’t afford the travel costs to and from facilities.

The result? Many mothers gave mixed feeds or diluted the formula milk. Some even mixed water with mealie meal. Because formula milk requires sterilised bottles and clean water, which many mothers didn’t have access to, babies often ended up with severe diarrhoea and died of that rather than HIV.

But by 2012 the government had phased out the formula option in response to changes in World Health Organisation (WHO) guidelines for the feeding practices of HIV-positive mothers. The policy change came after evidence emerged that women on ART during pregnancy and breastfeeding had very little chance of transmitting the virus.

The research was published in The Lancet Infectious Diseases journal in 2011. The WHO’s evidence review also found that, compared to breast milk, formula was an inferior source of nutrition for babies. In South Africa, the health department then stopped providing free powdered milk.

The health department’s current baby feeding policy prescribes that all mothers should breastfeed their babies exclusively for six months, regardless of their HIV status.

In South Africa, the law also only provides for four months of maternity leave, taking working mothers away from their babies, and making it impossible to breastfeed exclusively, unless they’re able to express milk and appoint someone to feed it to their infants.

When Pearly was two months old, Sibiya’s parents wanted Mhlongo to take her off breast milk and start to feed her pap. But Sibiya fought for her rights: “No,” he explained, “she needs to only get breast milk for six months. She will be much healthier.” 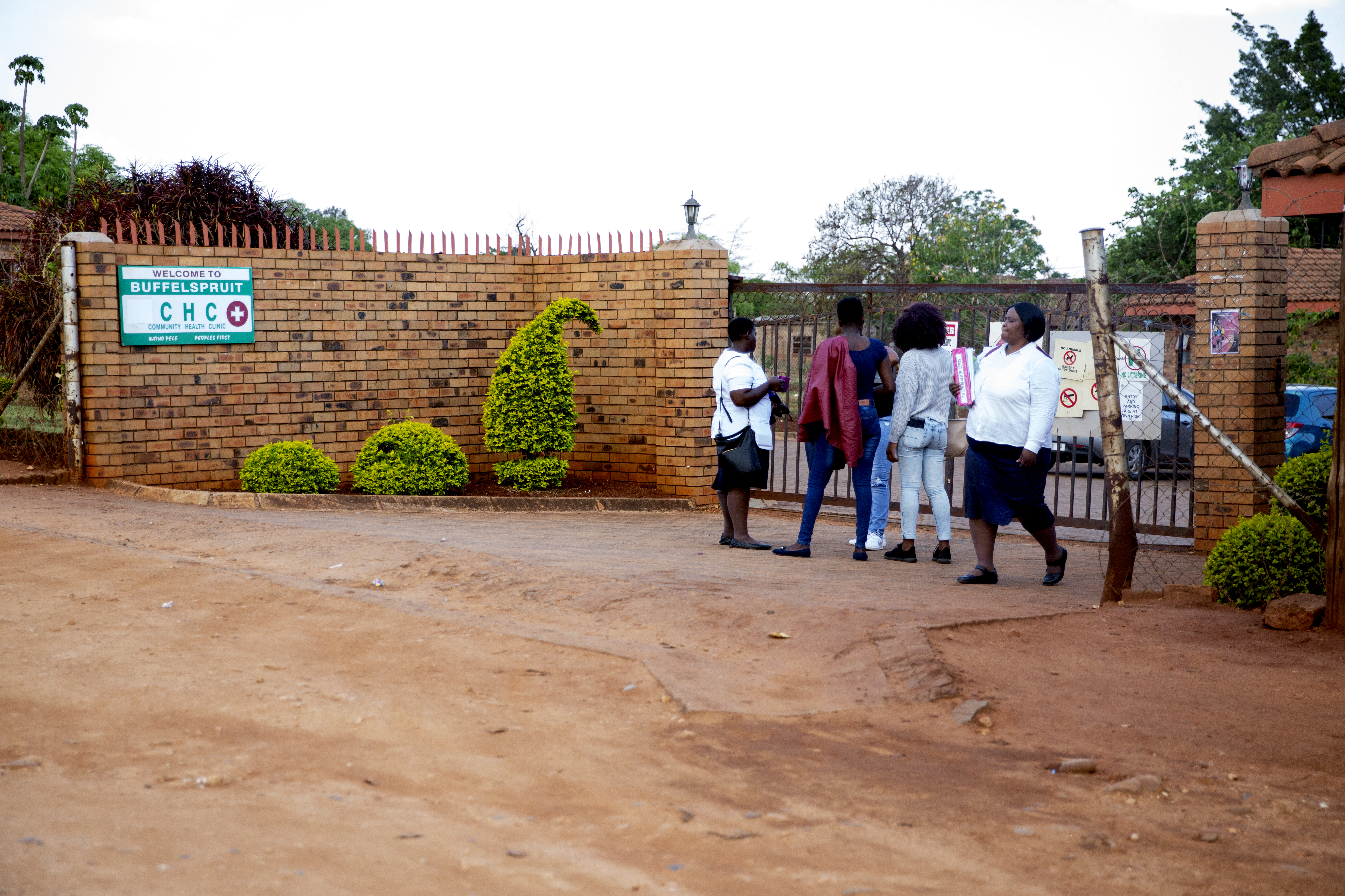 Men in a small Mpumalanga study said clinics are dominated by women. That’s why they were less likely to accompany their partners during pregnancy.  (Dylan Bush)

Research shows that a supportive male partner in particular could make or break whether moms breastfeed or not.

A 2016 paper presented at the International Congress of Behavioural Medicine Conference in Melbourne showed that cultural beliefs, such as conceptions of what a man’s role should be in child-rearing, could negatively impact on the role men are willing to play in their partner’s pregnancy.

The presentation was based on a small study of 53 men in Nkangala and Gert Sibande health districts in Mpumalanga. Many men feared that, if they assisted in the housework or care of the baby, people would think their wives had given them a love potion.

Some believed they were only obligated to provide financial support or argued that cultural beliefs dictated that they should keep their distance once the baby is born.

Some said clinics only catered for, and were dominated by, women. A 2018 African Journal of Nursing and Midwifery study recommends that health facilities create conditions that would promote fathers’ or male partners’ willingness to participate in feeding.

But Sibusiso Sifunda, the chief research specialist at the Human Sciences Research Council’s HIV Unit, says there is still very little acknowledgement of the role fathers can play in supporting exclusive breastfeeding and, in the process, prevent HIV transmission.

Today, fewer than 3% of babies born to HIV-positive mothers in South Africa contract the virus thanks to ARV treatment, according to a 2013 Medical Research Council evaluation carried out among babies two months or younger. But by the time babies reach 18 months, this proportion jumps to about 4% shows data presented at the 2016 International Aids Conference. Breast milk from mothers not virally suppressed likely plays a major role in these new infections.

That’s why South Africa’s new plan aims to improve services to diagnose pregnant women with HIV and improve their adherence to ARVs. But barring broad community programmes, the Mpumalanga health department could not name any internal maternal health programmes that involve men.

Getting men involved isn’t the province’s only problem. Only 34% of people on HIV treatment in the province are virally suppressed — it’s one of the lowest rates in the country, according to a 2017 paper published in the Southern African Journal of HIV Medicine.

In addition, a study published in the International Journal of Environmental Research and Public Health in 2018 found that about a quarter of a sample of 700 HIV positive women were taking their ARVs incorrectly. Those who were pregnant, or who did not breastfeed exclusively, increased their babies’ risk of contracting HIV.

But as Mhlongo experienced before she had Sibiya in her life, there are endless stumbling blocks to exclusively breastfeed a baby without the support of the father.

When she was pregnant with her fourth child, Jacob, she had to leave her baby with her mother, because she did odd jobs to support her family. Even when she expressed breast milk to leave with her babies, family members left in charge of the young children often substituted the babies’ diets with other foods such as mealie meal. 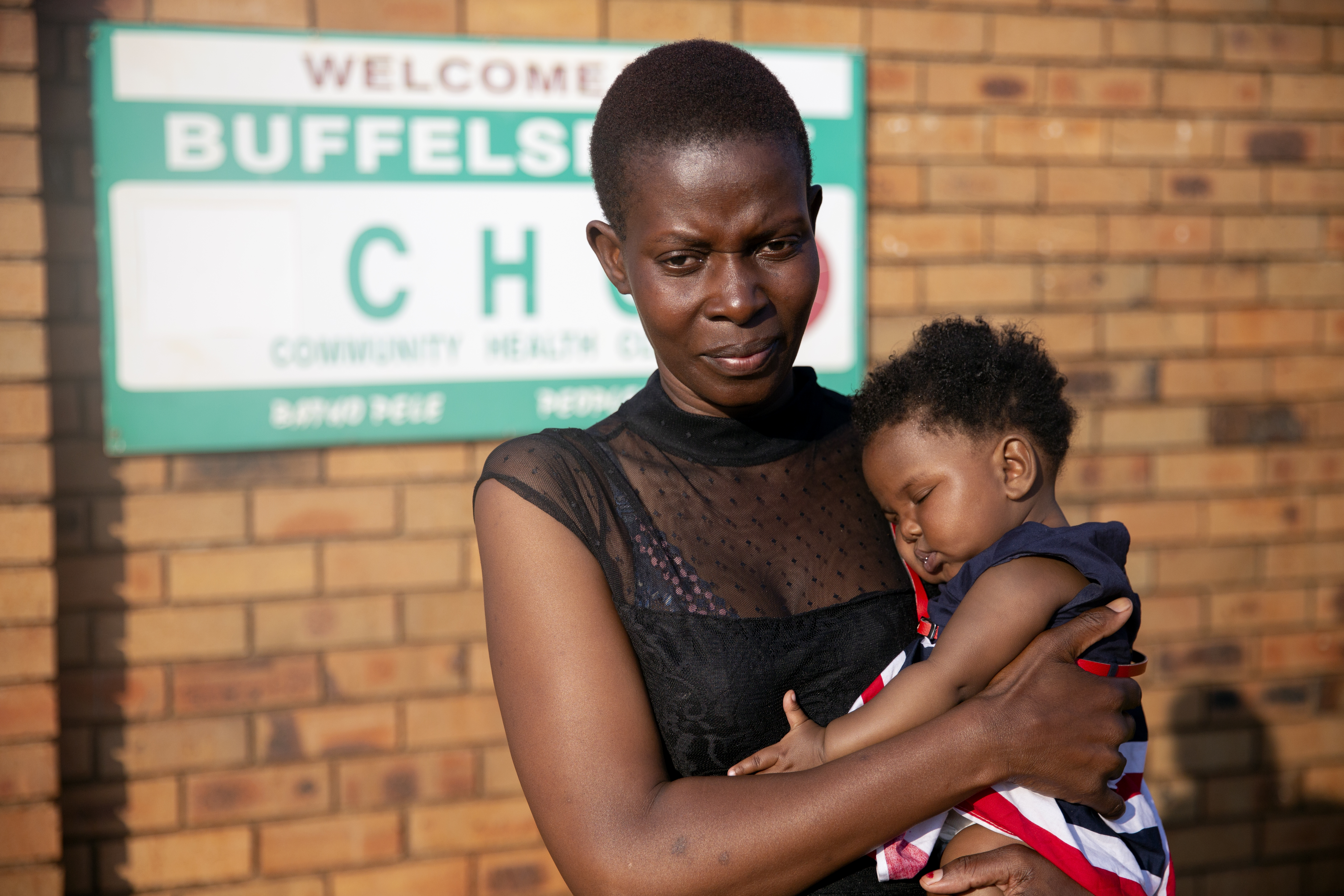 For the first time, Ntana Mhlongo has the support she needs to exclusively breastfeed her baby. (Dylan Bush)

Goga says that the 2011 change in government policy has left some myths about breastfeeding. “People still want to say you should exclusively breastfeed or not at all. In actual fact, as long as you’re virally suppressed some breast milk is better than none.”

This approach to mixed feeding is mentioned in the WHO’s guidelines, but to avoid confusion the health department has not included it in local plans, Goga says.

But back in Buffelspruit, Mhlongo is determined to breastfeed her daughter exclusively. All her children are HIV negative. “I’m happy I can be home to breastfeed Pearly,” she says. “I know if I left her here with the family, she might be fed with other things.”