Nearly R2 out of the almost R17 paid for every litre of fuel, a levy which has increased by more than 300% in the past 10 years, now goes directly to the insolvent and dysfunctional Road Accident Fund (RAF).

Although the RAF levy already makes up 36% of all government-imposed levies on the fuel price, further increases are likely because the fund now has a monthly average of R9-billion in claims in arrears.

In an average month, the fund will receive R4-billion from two billion litres of fuel sold, economist Mike Schussler has estimated. According to the fund’s financial statements, total revenue for the 2017-2018 financial year amounted to R37.34-billion (up from last year’s R33.34-billion).

“The RAF will require further large increases to the fuel levy in each of the next three years to manage the short-term liability,” he said.

During the 2017-2018 year, Paul Modipa, the general manager of the forensic and investigation department, reported that fraudulent claims amounting to R1.259-billion had been identified before they were paid out.

“We have rotten apples within the RAF,” said Modipa. “Three years ago, we were struggling. Now we are being proactive instead of reactive [in the fight against fraud]. We are not winning yet but we will do so.” 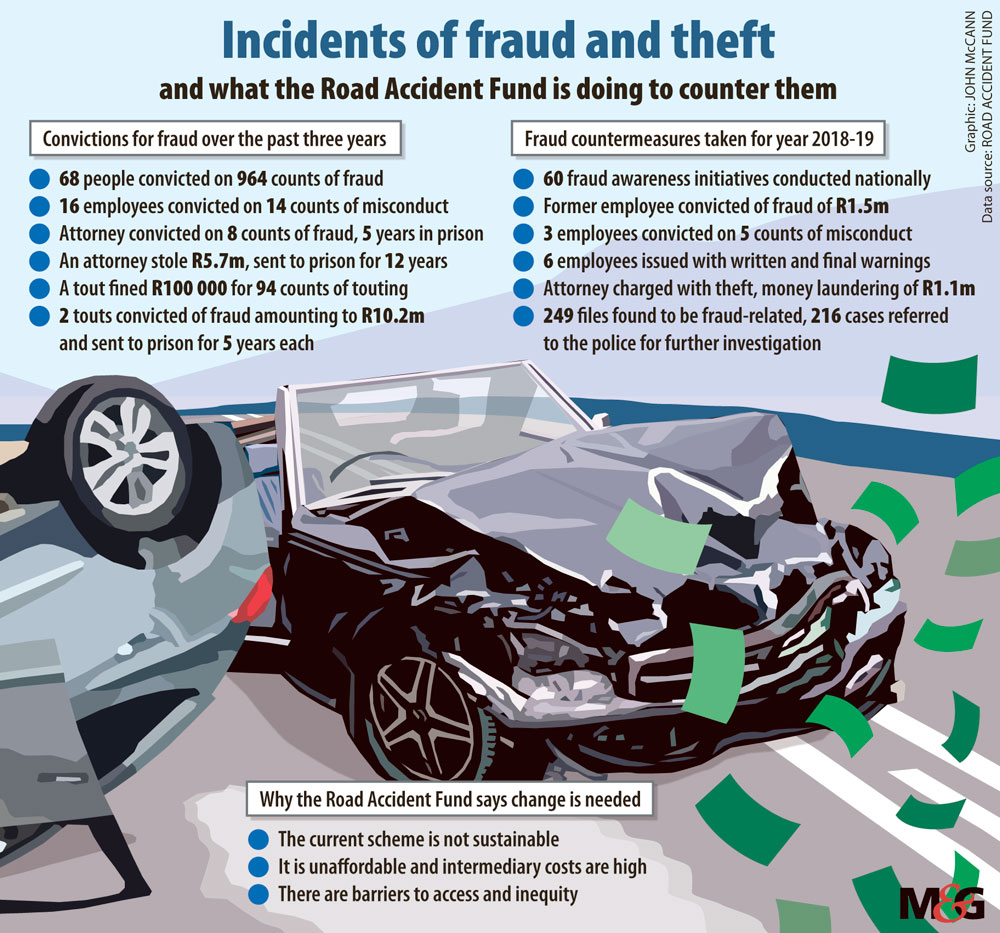 The RAF’s yearly earnings on average amounted to 1% of gross domestic product (GDP), said Schussler. But, with 271 933 new claimants registered over the past financial year, and a backlog of payments, the fund reported a loss of R26.4-billion in this financial year. This is an improvement from last year’s R34.7-billion loss.

Over the past 10 years, the levy has increased by 315%, according to Schussler, and it is likely to increase again in April next year. But even with further increases, it is unlikely to solve the RAF’s liquidity crisis. Its liabilities have continued to increase over the years as the fund has had to queue payments because of its cash-flow problems.

Vehicle-related deaths decreased by 2% nationally, according to the Road Traffic Management Corporation in its Road Fatality Report for 2017.

The present RAF model was implemented on May 1 1997 and was amended in 2005. The Road Accident Benefit Scheme (RABS) is being discussed now as a replacement for the RAF, which will see a cap put on claims made to the fund. The RABS, which was drafted in 2011, is currently with Parliament’s portfolio committee on transport.

READ MORE: Will the new scheme fix the broken one?

The draft Act, according to a 2016 cost evaluation, is expected to cost 20% less than the RAF, according Terence Gow, manager of regulation at the RAF.

The RABS would work on the principle that, because every driver would contribute the same amount to the fuel levy fund (currently R1.93 a litre), everyone would be equally covered, Gow said.

Although a new Act was expected to streamline the fund’s processes, economist Sam Rollan said the fund needed to address wasteful and fruitless expenditure.

“Streamlining the payment process may assist this to some degree but, in the current climate of weak growth and an under-pressure consumer, adding levies on to the petrol price will continue to be deeply unpopular and a limited option,” he said.

RAF acting chief executive officer Lindelwa Jabavu told the media on Tuesday: “As the RAF, we are addressing the symptoms and not the root cause [of these road fatality claims]; we need to be better drivers.”

South Africa does not mandate that citizens and drivers must have insurance, which means the RAF provides a social security net, by which the government can be sued, instead of an individual being held liable for the injuries or deaths incurred.

Despite concerns that the fuel levy could be increased to aid the fund, Phumi Dhlomo, the Road Accident Fund’s chief marketing officer, said that without it “the driver would be personally responsible for an accident. If an irresponsible driver with no insurance crashed into you, there would be no aid for you.”

Schussler said the fund was so important that it could never be done away with, because not enough individuals could easily afford insurance.

It made the RAF a “pro-poor policy”, Rollan said.

Namibia was one of the countries the RAF reviewed for best practice for accident claim funds, an executive said. For a long time, that country’s fund was also insolvent, with a backlog of claims. But it turned its situation around by paying only 40% of the amount due on claims in arrears.

“It would bring about solvency,” Rollan said, “but would not be popular as people would feel cut out from what they are owed.”

Another option to solve the RAF’s solvency crisis would be to get help from the treasury, but “there isn’t enough room to bail out the RAF from the fiscus”, he said.

The art of flouting security

Learning to find peace on the stage