As the country’s economy worsens, so dissent grows and its government becomes more repressive

Hakainde Hichilema believes he may only have a few days of freedom left. The United Party of National Development (UPND) leader, who has been the main thorn in the side of Zambian President Edgar Lungu for the past three years, fears that he will soon be arrested and detained. 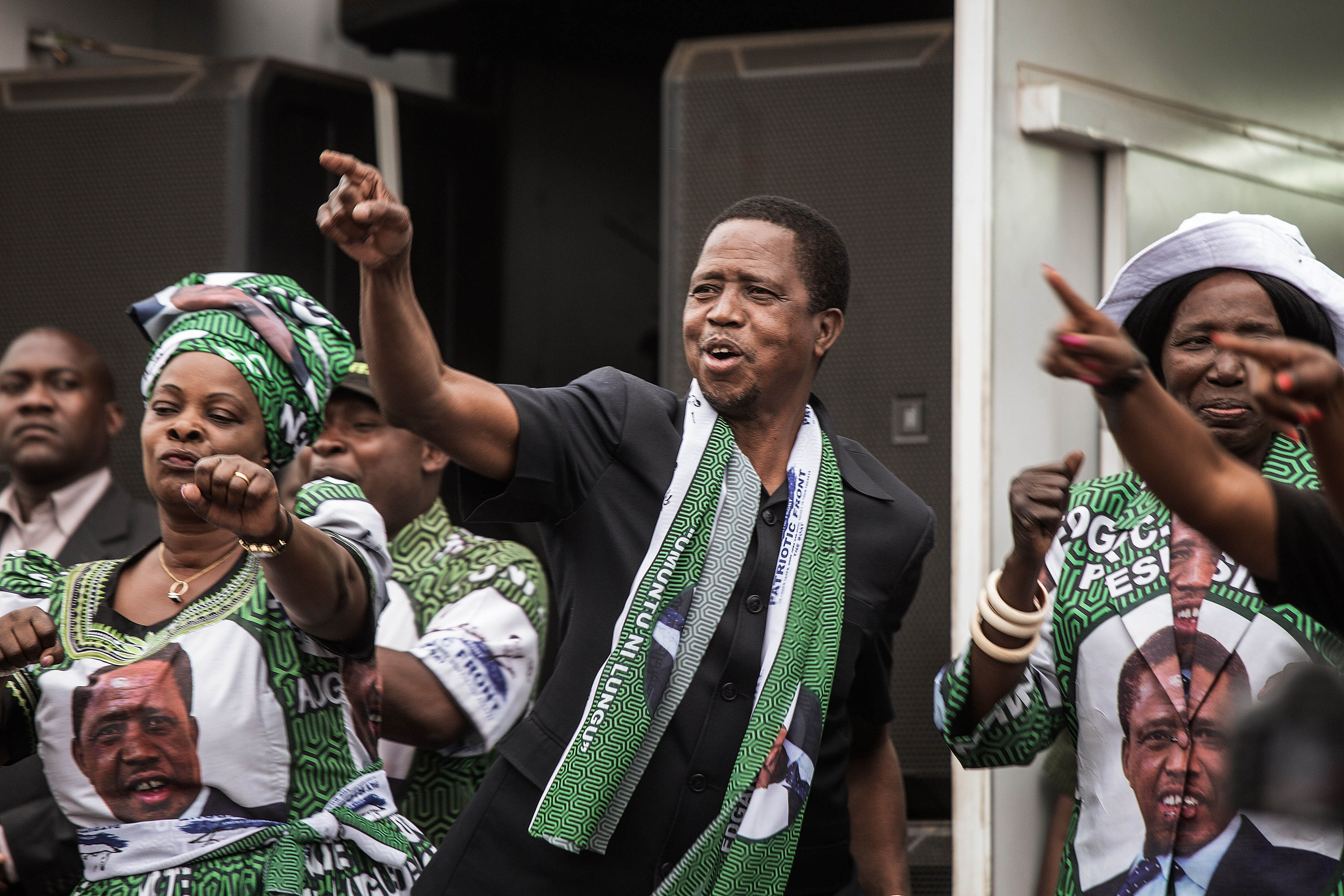 Speaking to the BBC on November  11, Hichilema said he was about to be charged with inciting violence for comments that he made on Sun FM on November 2, which the government alleges were the trigger for a riot in Kitwe three days later.

The riot began as a protest against the rumoured sale of state-owned timber company Zambia Forestry and Forest Industries Corporation (Zaffico) to the Chinese. A combination of economic downturn and the circulation of poorly evidenced stories that China plans to take control of key parts of the economy, including the national electricity supplier and airport, because the government cannot afford to keep up with debt repayments, has heightened public concerns that the country’s sovereignty is under threat.

Ironically, the nationalistic and anti-Chinese sentiment that is now such a challenge for Lungu has its roots in the policies of his own party. Under Michael Sata’s leadership, the Patriotic Front used China as a common enemy to mobilise a multi-ethnic and multiclass alliance.

When Sata subsequently won power in 2011, he quickly forgot that part of his election campaign, forming a marriage of convenience with the same Chinese businesspeople he had once called “foreign infestors”. But the hostility towards China that he helped to mobilise lived on and has contributed to several attacks on Chinese business owners and workers over the years.

Unsurprisingly, Lungu has conveniently forgotten about this aspect of his party’s past. It is far more convenient to blame the violence on Hichilema. In that sense, the opposition leader did contribute to the growing perception that the country’s assets are being lost because of shadowy deals that do not benefit the Zambian people. But he did not say anything to imply that Zambians should riot or commit acts of violence.

Nonetheless, leaders from the ruling Patriotic Front have queued up to point the finger at Hichilema, including the Copperbelt youth chairperson Nathan Chanda, who stated: “We are convinced that the riots which took place in some townships in Kitwe were as a result of abuse of freedom of speech and media through lies peddled by one opposition leader, Mr Hakainde Hichilema.”

For their part, the police have issued a summons for Hichilema to appear at the Copperbelt police division in Ndola for “investigations” on November 20.

Some critical voices have emerged to contest the government’s treatment of Hichilema, including prominent Lusaka lawyer Kelvin Fube Bwalya, better known as KFB. In a statement released on November  11, Bwalya expressed the concerns of many, arguing that “the recent Zaffico riots are just a tip of the iceberg of the many bottled-up frustrations simmering in a growing majority of Zambians” and he urged the government to halt its investigation into Hichilema.

But so far KFB’s warning that “if we destroy each other and destroy the country, it will be that much harder to recover as a nation” has not persuaded the Patriotic Front to change direction. If Hichilema is arrested, it will further polarise a political landscape that is already deeply divided as a result of the increasingly authoritarian bent of the Lungu government.

The president already has a worrying track record of detaining opposition leaders — former Patriotic Front leader Geoffrey Bwalya Mwamba, better known as GBM, has been arrested twice and Hichilema was arrested on trumped-up charges of treason for allegedly blocking the president’s motorcade in April 2017. That episode went a long way towards undermining the government’s legitimacy.

The latest round of repression will only make matters worse because it is not just Hichilema who is being targeted but a broader range of government critics, including influential civil society groups and outspoken university academics, such as respected political commentator Sishuwa Sishuwa, who has previously received death threats from Lungu’s supporters.

On October 19, clergymen in Ndola were taken aback when police disrupted a meeting that had been organised with the Centre for Trade Policy and Development to discuss the proposed budget for 2019. Not only was the meeting brought to an abrupt close but Pastor George Palo, who had helped to put the event together, was also detained.

The meeting was held at the Ndola Central Baptist Church, but was attended by church leaders from several denominations and so has been interpreted as an infringement on the rights of civil society and religious groups.

Despite considerable public criticism, including from other religious leaders, the police have been unrepentant, saying that five pastors and three officials from the Centre for Trade Policy and Development would be charged with the offence of unlawful assembly. The charges were justified, the police claimed, on the basis that the meeting had been “political” and the group had not applied for a police permit.

Although the initial disruption of the meeting might have been a simple mistake — overeager police officers jumping the gun in the context of a charged political atmosphere — the decision to charge the eight individuals is strong evidence that the harassment of the clergymen is in line with government policy, which is becoming increasingly intolerant of any form of dissent.

Criticism of the budget is particularly sensitive for the government this year because the state of the country’s economy remains highly controversial. On the one hand, the Patriotic Front has been accused by opposition leaders of contributing to an unsustainable debt burden because of corruption and economic mismanagement.

This argument hits home because there is mounting evidence to suggest that it is true: four of the country’s most important international donors recently suspended their support of government projects when it was revealed that almost $5-million in donor contributions are missing. The funds, which were given to the ministries of health, education and local government, were intended to provide assistance to 632 000 people.

On the other hand, the stated priorities of the finance minister with this budget — bringing expenditure under control and balancing the books — seem implausible given that one-third of the budget is scheduled to be raised from foreign funders. According to economist Trevor Simumba, this “will lead to even more debt and fiscal deficits”.

A growing consensus is emerging that the country’s economy is only likely to get back on track if a proposed rescue package the International Monetary Fund (IMF), said to be worth $1.3-billion, can be agreed upon. But that seems further away than ever because of the government’s profligacy.

This backdrop helps to explain why Lungu is so sensitive about the discussion of economic issues. Against the backdrop of corruption accusations and the repeated failure of the government to conclude a deal with the IMF, a debate about the budget is a debate about the quality of the president’s leadership.

Showcasing the government’s economic limitations threatens to undermine the president’s ability to persuade Zambians that the Constitution should be interpreted in a way that would enable him to run for a third term in office — a looming controversy that some argue will trigger regime change.

In this sense, Lungu is caught in a Catch-22: he does not want to agree to the conditions laid out by the IMF because the reduction in government expenditure this would involve would further undermine popular support for a third term. But by allowing the economy to die a slow death, he is driving voters into the arms of the opposition.

This means that the situation in Zambia is likely to get worse before it gets better. The democratic backsliding taking place under the Patriotic Front is rooted in the fact that Lungu is one of Africa’s least secure political leaders. Constantly on the verge of losing power, he has fallen back on intimidation and coercion in the absence of major policy successes that he can sell to the Zambian people.

After two close and controversial election victories, which he won by just 28 000 and 100 000 votes in an electorate of almost seven million registered voters, any significant growth in support for the UPND would spell defeat.

As the economic situation deteriorates, we will reach a point at which only repression will keep Lungu in power — and that is very bad news for Zambian democracy.