After years of barking, the AG gets teeth

Groundbreaking legislation, signed into law on Sunday, gives Kimi Makwetu, the auditor general (AG), new powers to act on corruption and the abuse of public money.

The Public Audit Amendment Act only needs the president to announce a commencement date for it to come into force.

The amendments are a global first, according to Pan-African Investment & Research chief executive Iraj Abedian. If successfully implemented, “both corrupt politicians and corrupt technocrats will no longer be able to hide behind the collective to get away with the abuse of public funds”.

The Public Audit Act of 2004 gave the AG the independence to establish auditing functions, but the AG’s office did not have the power to enforce the implementation of its recommendations.

Wasteful expenditure and irregular expenditure increased to R2.5-billion and R51-billion respectively in the 2017-2018 financial year, and they have increased steadily since 2014. As audits continued to regress over the past 13 years, the AG has tried to find ways to address the situation.

When the amendments come into force, the AG will be able to refer serious audit irregularities for further investigation to the Hawks, the South African Police Service and the public protector.

The amendments will also enable the AG’s office to recover lost funds from wasteful and fruitless expenditure and to order the implementation of remedial action. If this action is not implemented or is not satisfactorily explained, the official or the board the AG has ordered to implement the recommendations will be issued with a certificate of debt and be held liable for the recovery of funds. “Ultimately for us, the winning formula here for us is, if we can succeed in discouraging someone from ignoring irregular expenditure, that’s a win,” Makwetu told Parliament.

One of the reasons the AG’s office was not given the power to enforce its recommendations was because of a global assumption that state-owned enterprises and government departments would act on audit findings, the director of the Public Service Accountability Monitor, Jay Kruuse, said. That had not been the case in South Africa. 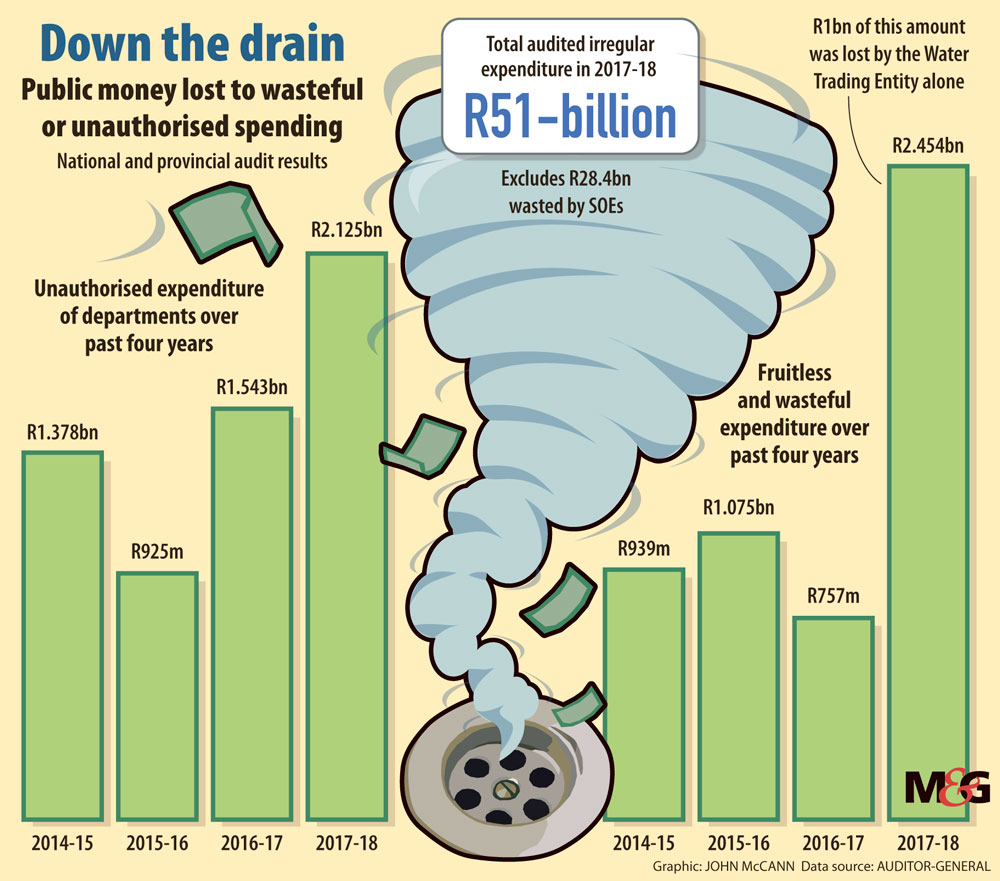 Paul Hoffman, the director for Institute for Accountability in Southern Africa, said: “The auditor general has made recommendations in the past that have simply been ignored.”

The Public Audit Amendment Act is supposed to change this. In a report released on Wednesday, Makwetu said: “The public audit Act will provide us with more power to ensure accountability in the management of public funds.”

The aim of the amendments was to empower his office “to directly impact on these audit outcomes”.

The amendments may allow the AG to hold state-owned enterprises, provincial and national governments accountable but, according to Kruuse, they will require a “collective effort” to be implemented.

“The AG is leading by example. Parliament and law enforcement need to support the office of the auditor general, or the amendments will remain superficial,” Kruuse said. “We need to send a clear message that there are real consequences for financial mismanagement.”

Once the president has announced the commencement of the Act, the AG has 90 days to draw up regulations on several processes proposed by the amendments, including timeframes for remedial action and the implementation of a certificate of debt.

Abedian said that, overall, economists believed it would take several years for the amendments to be “bedded down” and “capacitate the auditor general’s office to be in a position to implement the legislation both in form and in spirit”.

Noncompliance has become the norm

A pattern of noncompliance has emerged in government entities, which has contributed to ever-increasing irregular and fruitless expenditure, because the auditor general’s (AG’s) findings were not acted on. The Public Audit Amendment Act will address this.

These are some of the cases the AG would have intervened in:

The AG said there were many municipalities where irregular expenditure had not been investigated, which has led to a culture of noncompliance and no consequences. — Athandiwe Saba and Gemma Ritchie