A nervous laugh. Mention of how good the director general is. Then a change of topic. This was the protocol at the department of environmental affairs on Monday. Edna Molewa, the department’s long-serving minister, had died two months before. Her replacement, Nomvula Mokonyane, was arriving. The director general was going through an exhaustive briefing to make sure the handover was done properly.

The appointment of Mokonyane, in a reshuffle last week, came as a shock to people in the department. Talking to the Mail & Guardian this week, they were quick to share anecdotes of how bad things got at her previous major ministry, the department of water and sanitation.

Her new appointment was the work of ANC internal politics, they said. Mokonyane carries great power thanks to her position in the ANC Women’s League. President Cyril Ramaphosa could not, as yet, move against her. So he moved her to a department with little budget and strong institutions. This last part is conjecture. The president did not disclose his motivation for the appointment.

The presidency did not respond to questions. Neither did Mokonyane.

Environmental affairs is responsible for the air that people breathe, all living things in the republic, and for navigating the country through what will be catastrophic climate change. The impact of “Mama Action”, as Mokonyane has come to be known thanks to her time as Gauteng premier, will become apparent in the coming months.

Driven by the concerns expressed by people in her new department, the M&G has pieced together a picture of the water department as it stood this time last year. This was just before Ramaphosa took over from former president Jacob Zuma and moved Mokonyane to the communications department.

At this point, Mokonyane had been at the water department since 2014. A decade of corruption — with 58 cases referred to the National Prosecuting Authority for prosecution — and institutional weakness before her arrival, with constant turnover of skilled staff and internal investigations, meant she inherited a lot of problems. Much of what would unfold would therefore be a combination of long-running issues and a failure to manage those issues. What is clear is that her tenure did accelerate the department’s implosion.

By mid-2017, the department said it owed contractors R1.5-billion. The Reserve Bank had frozen its overdraft facility, saying it owed R2.6-billion. Things were so bad that the parliamentary committee tasked with overseeing water and sanitation threatened to postpone its budget vote. The debt forced the department to slow down big infrastructure projects, such as the dams that help areas to survive prolonged drought. It also meant it had no budget to help with the Cape Town drought. 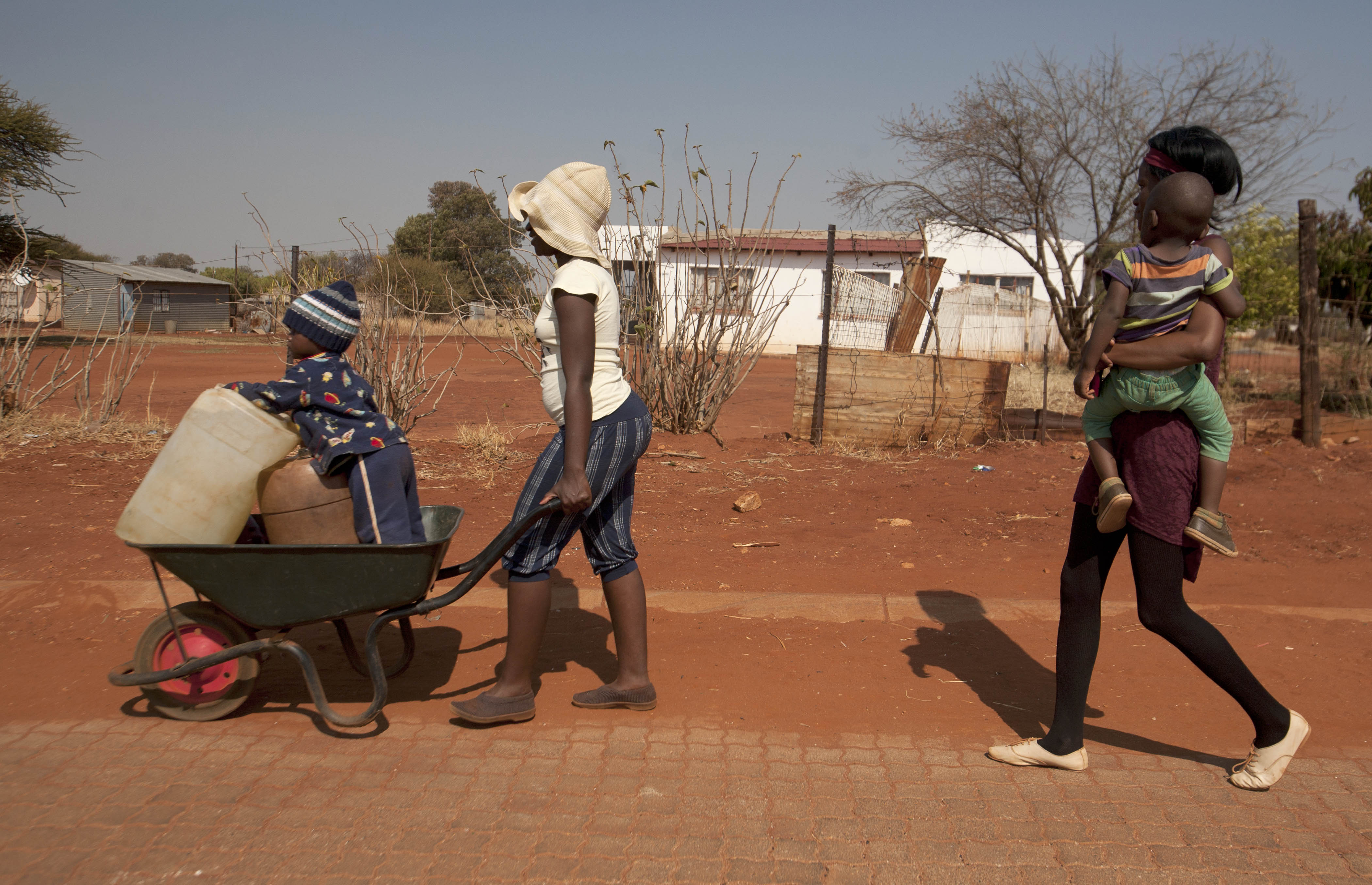 Mokonyane accelerated its implosion to the point where irregular spending was at R4-billion in 2018, yet taps in towns such as Mabeskraal ran dry, and 20-million South Africans still don’t have access to clean water. (Oupa Nkosi)

A report by the auditor general, published late last year, found that the 2014 arrival of Mokonyane coincided with an acceleration of irregular spending. In 2009, this had been an almost healthy R13-million. By 2014 it had grown to R2.5-billion. In 2017 it was R4-billion, almost a quarter of the department’s entire budget.

The M&G has reported on the impact of this irregular spending across the country, from dry taps in Mabeskraal in the North West and Giyani in Limpopo to sewage leaking into rivers across Mpumalanga. By the department’s own calculations, it has spent enough money to give 95% of households access to water. The Constitution guarantees the right of access to water. Water affairs is tasked with fulfilling this right. But its calculations show that 20-million people don’t have access to clean water, because of broken and unfinished water systems.

Giyani is a classic example of how this happens. A drought in 2009 exposed the area’s water woes. About R5-billion has since been spent to fix the problem, with an intense focus on the area starting prior to the 2014 elections. People still don’t have water. This week, the Special Investigating Unit instituted civil charges to set aside the contract awarded for work in Giyani.

Another investigation by the auditor general into water projects such as Giyani found that companies on that project were charging 11% of the total project value in fees. The industry norm is 5%.

Examples of double accounting were also found, with companies billing for one employee doing one thing, and then billing for the same employee doing another thing, at the exact same time. Costs claimed were also “excessive”, according to the investigation. In cases where registered professionals would charge R1 446 an hour for work, the companies were claiming up to R3 500 an hour.

This investigation concluded: “We recommend that the [water] department conducts a full investigation to determine the actual fruitless and wasteful expenditure of these projects.”

Inside the department, the impact of this wasteful expenditure is that there is little operational budget. The M&G has spoken to current and former employees — more than two dozen over the past few years — and all have pointed to low staff morale and a high turnover. The national treasury said last year that there were 900 vacancies in the department. In the office of the director general, half the positions were empty, because the majority were “not regarded as a priority post as a result of budget cuts”. By 2017, the department had had nine different accounting officers in eight years. An acting director general had also become the norm, with this position being consistently vacated, thanks to resignations or suspensions.

Speaking at the time, Mokonyane said treasury cuts to her department’s budget were a problem. The treasury responded by saying that the department needed to balance its own books by getting money from the people that it sold water to, so it could cover infrastructure projects.

In a report to the parliamentary committee last May, the auditor general said it had given the department a qualified report. It noted that the department “did not have adequate controls to identify unauthorised, irregular, fruitless and wasteful expenditure within projects”. As a result, it had spent 99.6% of its budget for water infrastructure, but had only achieved 28% of its objectives for infrastructure.

The department was also roundly criticised for not having much policy direction. Because she had inherited a problematic department, Mokonyane commissioned a review of how it worked, or didn’t work. A similar report, published by the SA Water Caucus late last year, concluded that: “It is apparent that the outcomes and recommendations stemming from this process were entirely ignored, evident in the ongoing and intensified structural problems within the department.”

The caucus is a coalition of civil society groups and carries a great deal of weight in the water sector.

Reporting to Parliament last year, the National Planning Commission said it had concluded that the department “did not have a comprehensive management strategy” and infrastructure was falling apart as a result.

A report into the department’s no-drop programme (an attempt to reduce the third of water that leaks out of faulty pipelines) commissioned by the Strategic Water Partners Network, a group of big industry users (such as Nestlé), concluded that the country had a water crisis on its hands.

The report, drawn up by the South African Academy of Engineering, said this was being “aggravated by inequities in access to water and sanitation, deteriorating water quality at sources, and insufficient skilled professionals, technologists and technicians in engineering and the sciences”.

New minister Gugile Nkwinti has managed to delay attempts to put the department under administration. But water provision is difficult, given how much money the department needs to pay back. Thanks to his predecessor, the task he faces is gigantic.

None of this bodes well for the environment department. But the situation is very different from water affairs, because it has strong institutions. Only time will now tell. That time will be decided by how long it takes for the president to amass enough power to feel confident enough to do another shuffle.