The Zondo state capture commission has reminded us of just how much pressure the Jacob Zuma administration put on the media over the past decade. Mzwanele Manyi’s appearance before it simply confirmed that there was nothing straightforward or clear about the establishment of The New Age newspaper and television news channel ANN7.

But, in the same week, we have seen a media sector preoccupied about the Economic Freedom Fighters. Coverage of its rallies, press conferences and tweets and indignation over the EFF’s often inflammatory and bigoted comments have peaked in recent weeks and this week was no different. This is understandable. The EFFs conduct and vitriolic commentary has been totally unacceptable.

But the stakes are high and, as the Zondo commission demonstrated this week, the EFF is only one part of the equation.

It is easy to conclude that the rhetoric of the party has got out of hand, that it risks losing the plot now that Zuma is gone. All that may be true, but there is something more at play, a deeper issue that isn’t simply about a single (albeit badly behaved) party.

In many ways, the fetishisation of the EFF is symptomatic of the tendency of elites in South Africa to provide reductive and ahistorical analyses.

Singling out the EFF is seductive. Still, an excessive and singular focus on the EFF is short-sighted and bad for our democracy.

Even well-meaning attempts to address the rambunctious, aggressive, misogynist and increasingly bigoted conduct of the EFF will fall apart if they target the EFF alone. It may be the loudest threat to media practitioners at the moment, but it is by no means the only or even the most serious.

The EFF is the news item of the moment and so many outlets focus on the party as though it exists in a vacuum. This exaggerates the EFF’s role and does nothing to help the public to understand the broader issues of media freedom that are at stake.

It also absolves other actors of responsibility for the current poor state of our democratic discourse. In particular, it lets the ANC off the hook. Over the past 10 years, it is the ruling party whose deliberate actions have most weakened the media as a whole.

To be sure, in recent months the EFF has been especially badly behaved. From Floyd Shivambu’s unacceptably aggressive behaviour towards journalist Adrian de Kock earlier this year to Julius Malema’s insistence on labelling certain members of the media as Stratcom officials in the wake of Winnie Madikizela-Mandela’s death and to his more recent violent rhetoric on the sidelines of the Zondo commission, the party has been indefensible.

Make no mistake, their strategy is designed to scare journalists and prevent scrutiny. It was no accident that, following allegations of wrongdoing in relation to the VBS Mutual Bank scandal, the EFF has been prepared to exploit already existing divides in our society by painting itself as a victim of white monopoly capital.

They have deployed half-truths and bizarre conspiracy theories to defend themselves, growing more bellicose in their rhetoric as they fight against a media they claim is biased against them. In their version of events, the old apartheid order is alive and well, and it is operating through the media. They are being attacked because the media doesn’t like radical, successful black people. 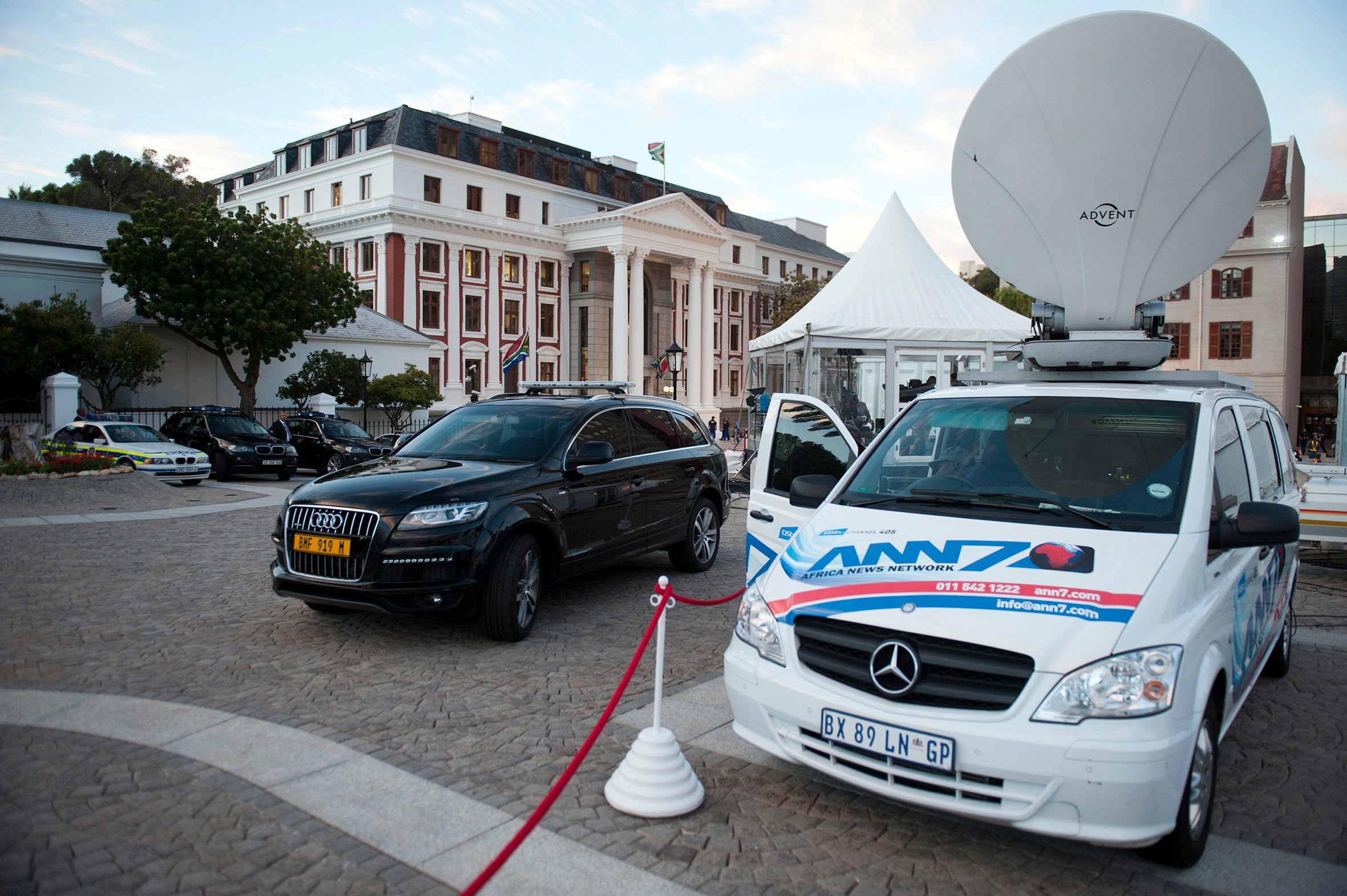 Propaganda mouthpiece: ANN7, like The New Age newspaper, wasn’t just a bad news outlet, it was a bad news outlet that was paid for by money funnelled from the public purse. (David Harrison)

The trouble with this analysis is that, crudely speaking, it is true or, at least, it contains enough truth to be credible. If you create a category of “media” that doesn’t differentiate between outlets as diverse as, for example, GroundUp and eNCA, and if you accept that implicit bias works against black people (which, by definition, it does), then they are correct.

But when you get down to specifics, the picture is less clear. In the absence of any evidence, there is no reason to believe that a journalist who is reporting on the VBS scandal has fabricated allegations because they are anti-black. If the claims are true, the motivations of the journalist, although important at a macro level, cannot be used to bat away allegations of wrongdoing.

Still, insufficient attention has been paid to the fact that the EFF’s stance on the media in the past few months has been a carbon copy of the ANC’s attitude to the media in the past decade. Although there are some (not unimportant) differences in tone, the general idea that a white-controlled media that is deeply invested in black failure is gunning for the leadership of the ANC has been pervasive within the ANC for some time.

That narrative has only recently begun to change because of the ascendancy of President Cyril Ramaphosa, who has been on a campaign to win over the media as his party heads to the polls.

Dating back to the Thabo Mbeki era, there has been considerable antagonism in the ruling party towards the media. Of course, the sustained viciousness and the development of a co-ordinated strategy with which to punish the media kicked in under Zuma. As we saw this past week when Minister of Social Development Bathabile Dlamini banned eNCA from her press conferences, that obtuseness is alive and well in the ruling party.

It is the ANC that created the conditions that the EFF is now exploiting. The ruling party has waged an unrelenting and deeply damaging 10-year campaign against fair and fearless reporting. It was not the EFF but the ANC that spent millions of taxpayer rands on and used the pensions of public servants for dubious investments that were aimed at restructuring the media landscape to favour it.

It is the ANC government and ANC leaders who worked hand in hand with the Guptas to create proxy ANC mouthpieces, which manufactured news. The New Age and ANN7 made the EFF’s rally antics seem like child’s play. These weren’t just bad news outlets, they were bad news outlets that were paid for by money funnelled from the public purse. Their very existence, conjured out of thin air with our resources, were a total insult to taxpayers.

And let us not forget the SABC, our woeful public broadcaster. Within that monstrosity of a building in Auckland Park, journalists were subjected to the tyrannical antics of a fool. Promoted by an ANC-rigged board, the mini-dictator Hlaudi Motsoeneng created a vortex of chaos that continues to swirl to this day.

As if this was not enough, the Twitter streets, which weren’t perfect to begin with, were suddenly awash with Bell Pottinger bots. In case we have forgotten, it was Duduzane Zuma who asked Bell Pottinger to run a Twitter bot campaign and instructed them to foster division “along the lines of economic emancipation, whatever”.

In other words, part of the blame for the appalling state of social media discourse today belongs to the Zunami. The EFF army is doing an admirable job catching up, however.

In addition, of course, the ANC also used the media in its factional battles. The Sunday Times debacle is a classic example.

The effect of the onslaught on the media by the ruling party has been profound. Newsrooms have haemorrhaged senior staff. As a result, a generation of young journalists has been led by distracted or politically compromised managers.

Far too many of today’s journalists have cut their teeth in an atmosphere of insecurity and turmoil within their sector. Instead of learning to be independent, tough and fair, they have been taught how to pursue agendas, curry favour and evade accountability.

The cumulative consequences cannot be ignored. Too often audiences are fed half-baked stories that are poorly researched, based on a single source or, worse, only reflect what people on Twitter think. There simply is not enough rigour in our reporting, in part because of all the pressures I have described above.

There are many wonderful journalists, of course, who work against the odds and take abuse from the public, politicians and their bosses. I will not mention their names here because that might be the kiss of death for them.

Still, there can be no denying that the quality of reporting has declined in the disastrous decade we are finally leaving behind us. It is clear that the legacy of the ruinous past decade of ANC rule will be with us on the printed page and in public broadcasts for many years to come.

Ultimately, the theatrics of the EFF and the (understandable but often superficial) responses they trigger among commentators and concerned elites will have a negative effect.

We are heading into a hotly contested election. Lined up against one another are combative politicians and a weakened and wounded media. This is a toxic combination and those most likely to be poisoned are the voters, who daily grow more and more cynical and less capable of judging fact from fiction.

Perhaps it is time for a mediated process that allows media institutions and politicians to agree on some ground rules. Although there are existing mechanisms, codes and charters, with the election looming, we need an urgent intervention.

One option to consider is a commission for media institutions and political parties, which would allow parties to air their grievances and confess to misconduct, such as offering or soliciting bribes and peddling influence.

It could mimic the state capture commission in its form. Whatever was revealed at such a commission would go a long way towards addressing some of the conspiracy theories that allow both journalists and politicians to hide their agendas and pretend innocence.

A fair election is the outcome of many factors, crucial among them being an electorate that is well informed and a media that is capable of disseminating sound and credible information. If our election is to be fair, we need to call for a truce. It’s not too late to restore goodwill and respect to our imperfect but hard-won democracy.