In 1995, at the start of the Rugby World Cup final, South African pilot Laurie Kay flew a 747 passenger jet over Ellis Park. The bottom of the jet read “Good luck Bokke”.

On Sunday, minutes before the Global Citizen festival began, a low flying plane drifted across FNB Stadium near Soweto. This time the under belly sported a Global Citizen sticker. This was followed by a short lived summer rain that blessed the day and cleared the clouds. The growing crowd marveled at this spectacle with cheers and assured sighs.

20 minutes before the festival was scheduled to start, patrons were slowly making their way into the stadium. To get there, most of them had to make their way from Nasrec, for just under a kilometer, on foot. Then they stood in long, curvy queues waiting for their turn to be checked by security. But the frustrations of being half way through their Sunday seemed to fizzle out when they found their seats at the evangelical crusade that was about to happen.

To begin the “service”, the Soweto Gospel Choir sang a song to thank Madiba before leading the crowd in the national anthem (or in this case what could be construed as a hymn) Nkosi Sikelela.

You see, while Global Citizen festival is a fundraiser aimed at addressing issues of global poverty and other social ills including gender equality and HIV Aids, Sunday’s concert had the makings of a charismatic church crusade. The likes hosted by mega churches like Pastor Chris’ Christ Embassy Church or Bushiri’s camp at the Pretoria show grounds.

Both the crusades and the Global Citizen festival draw large crowds with the promise of great performances in exchange for loud cheers of affirmation from the masses. Both encourage constant giving. Both revere and honour large donations with public announcements. In church we say tithes. On Sunday they called them pledges.

Our host, Trevor Noah congratulated the crowd for the 4.2 million actions they performed as global citizens leading up to the festival. They tweeted, pledged, donated, and petitioned to make it here. And like the church, one’s seat at the table is determined by the reach and depth of their generosity. 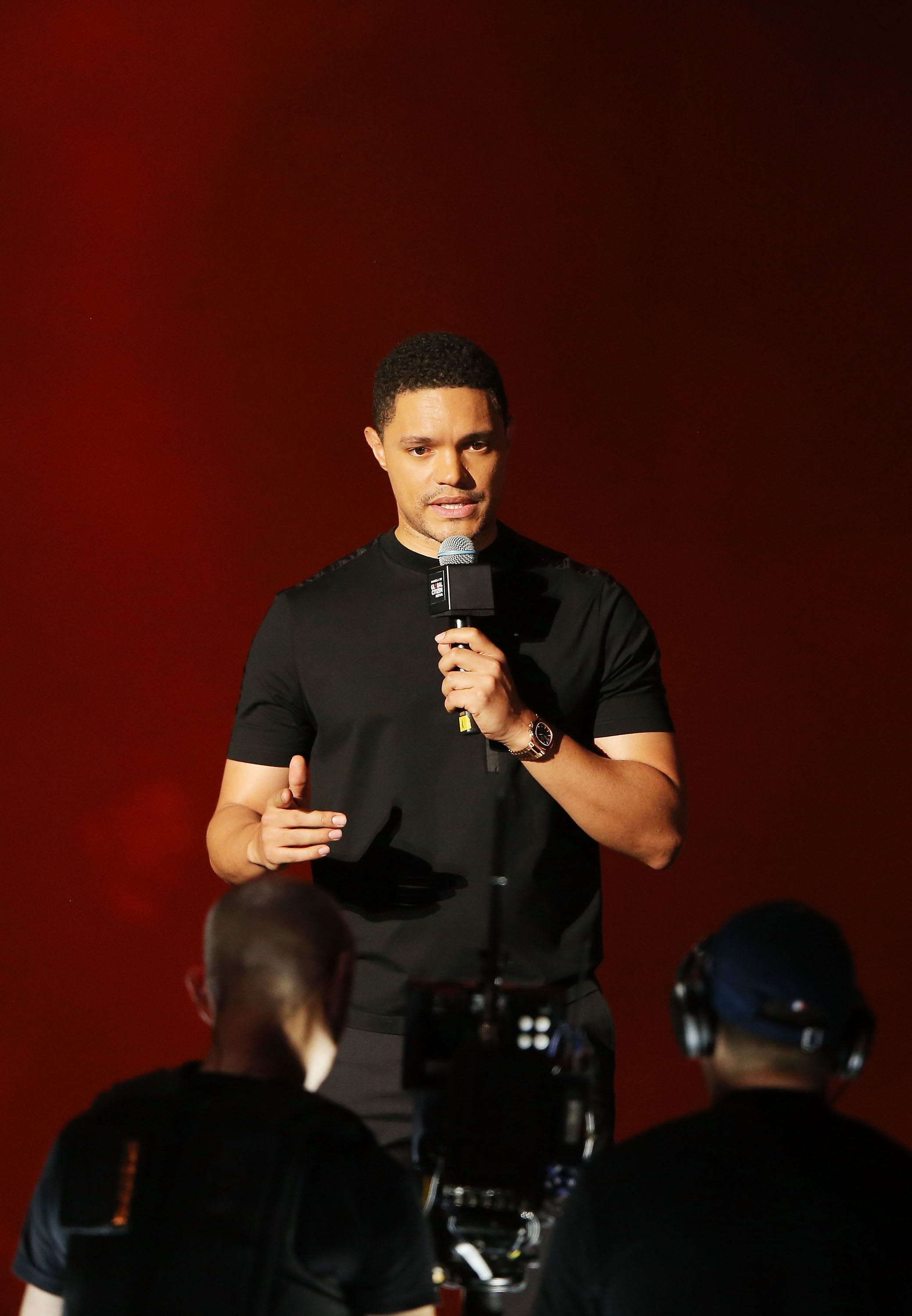 Every speech was a sermon daring us to be global citizens. uTata was the Messiah and his words were referenced as scripture. Very few mentioned mme Winnie Madikizela-Mandela’s role in keeping him in South Africa’s psyche except Sho Madjozi, Zindzi Mandela and Pearl Thusi, who was wearing a black T-shirt emblazoned with the words “I am Winnie Madikizela Mandela” in white. 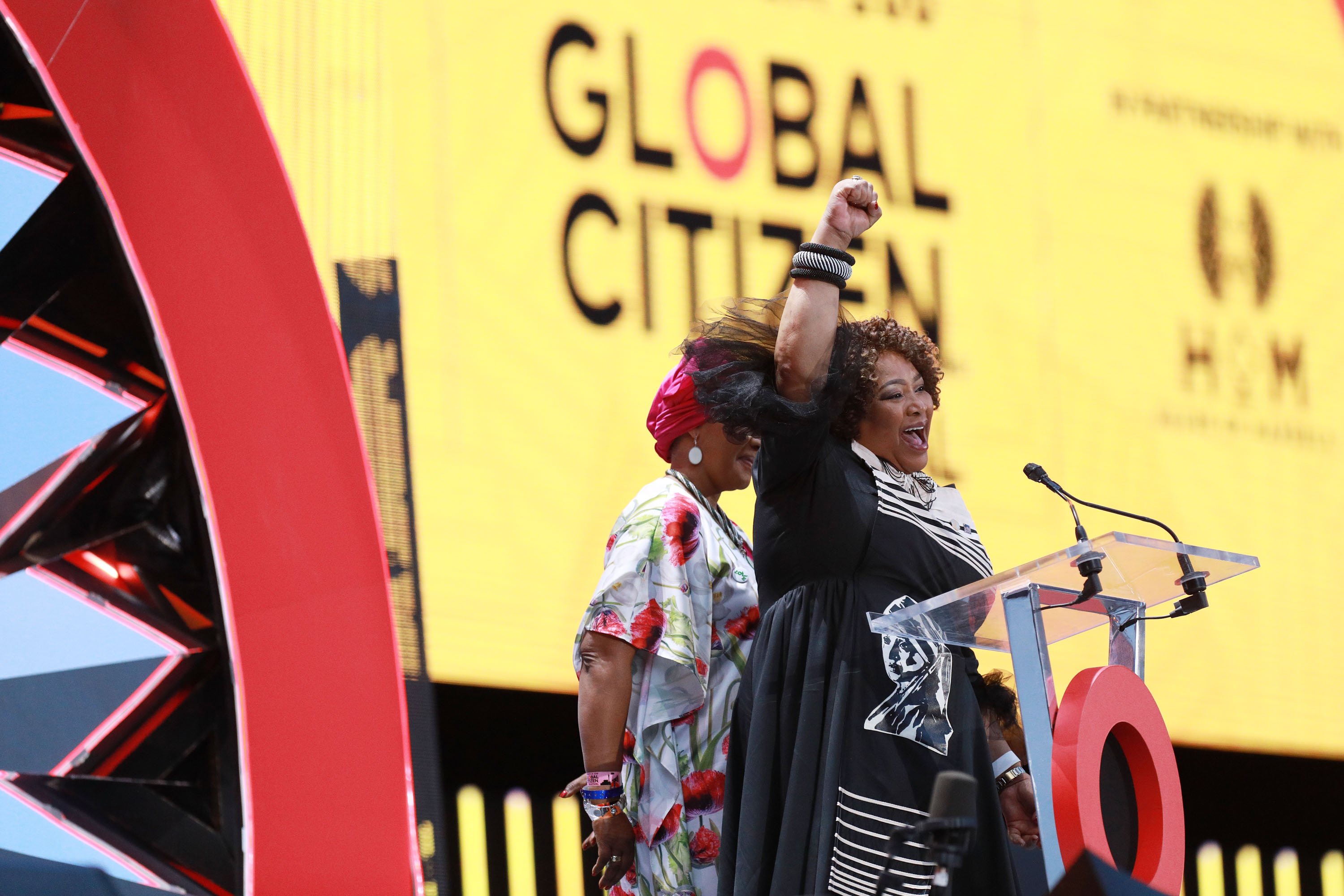 While dignitaries, presidents and activists spoke on social ills, people kept talking about the imminent performances by the favourite stars, taking selfies, eating and checking in on social media.

In between his set (where he performed Drop it Like it’s Hot, Lemon, Happy, Freedom and Gigaba’s budget speech reference We gon’ be Alright) Pharrell Williams tried to get the crowd’s attention by pleading with the them to listen to his plea for South Africa and the world to level the playing fields between men and women in all sectors. 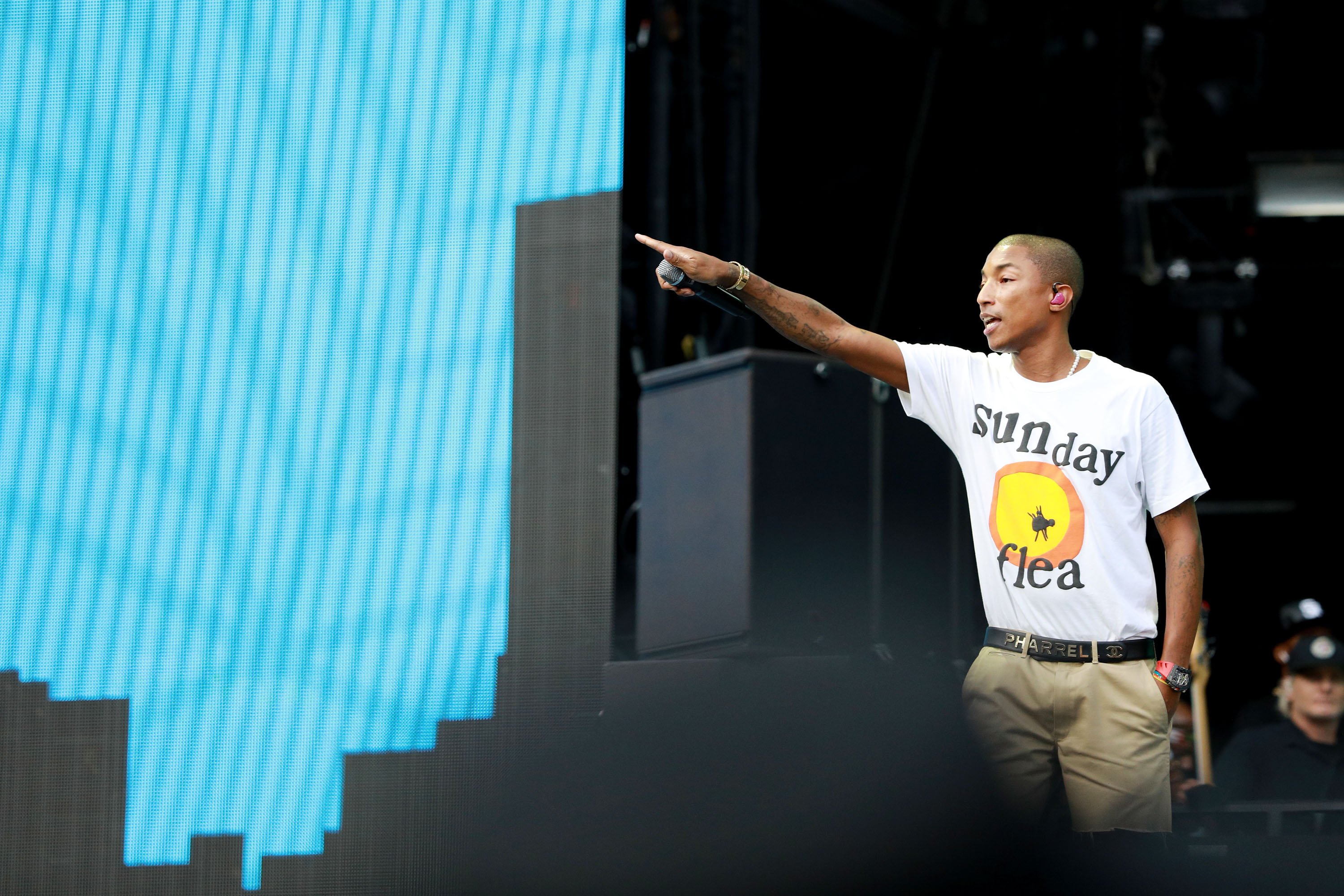 Instead they cheered when they were encouraged to “make some noise”, the same way church goers passively respond with “amens” to the pastor’s “hallelujahs”. It was as if during the events, the masses were overtaken by an evangelistic euphoria, veiling them from their realities, which the speeches were attempting to address.

When WizKid brought Maphorisa and Moonchild Sannely on stage, the sound engineers were yet to resolve the echo that made it hard for fans to sing along. Yet everyone was on their feet singing “Makhe- khe-khe-khe” along with Moonchild. The intro of Black Coffee and Nakhane’s Once Again sent the crowd into a roar that only grew stronger when Usher joined him on stage to sing the words of Without You to the backing of the house beat. They all gwara-gwarad with him and cheered him on with hollers of “Ayeye!” even when his mic was dysfunctional.

Sho Madjozi was scheduled to perform two songs but heard the audience’s cry for her to perform Huku in her Nike sneakers and a custom designed sgcebhezana xibelani. As the sun set on Soccer City and the evening programme ensued, the energy only seemed to intensify, with some festival goers crying while singing along to the songs of British pop sensation Ed Sheeran’s and American country music star Kacey Musgraves’ songs. 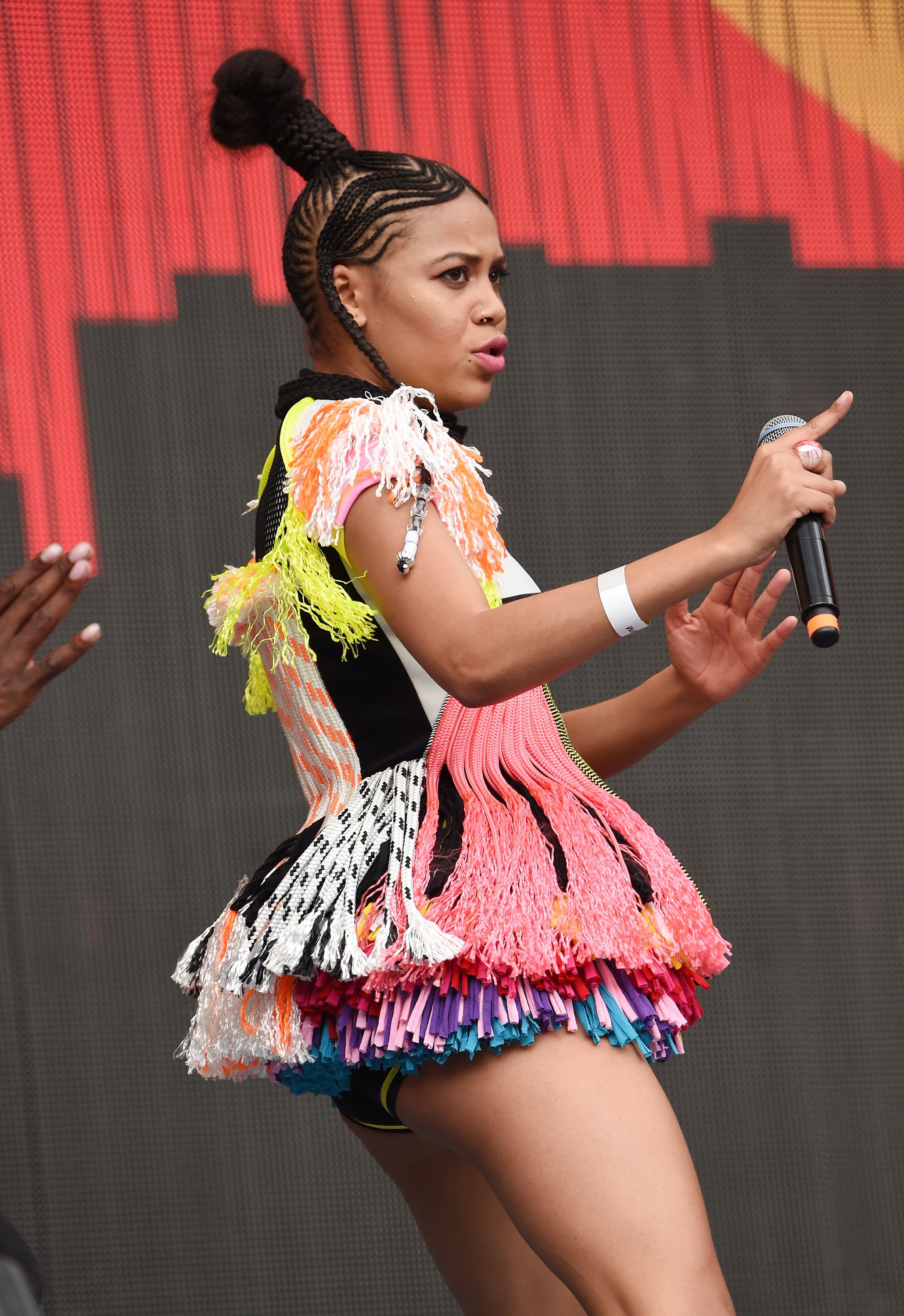 Regarding the line up, the crowd was catered for with a variety of musical genres and regions. In addition to the above mentioned Femi Luti gave us Afrobeats, Sir Bob Geldof brought rock, and Cassper Nyovest warmed the crowd up for the closing act with Monate Mpolaye and Gusheshe. 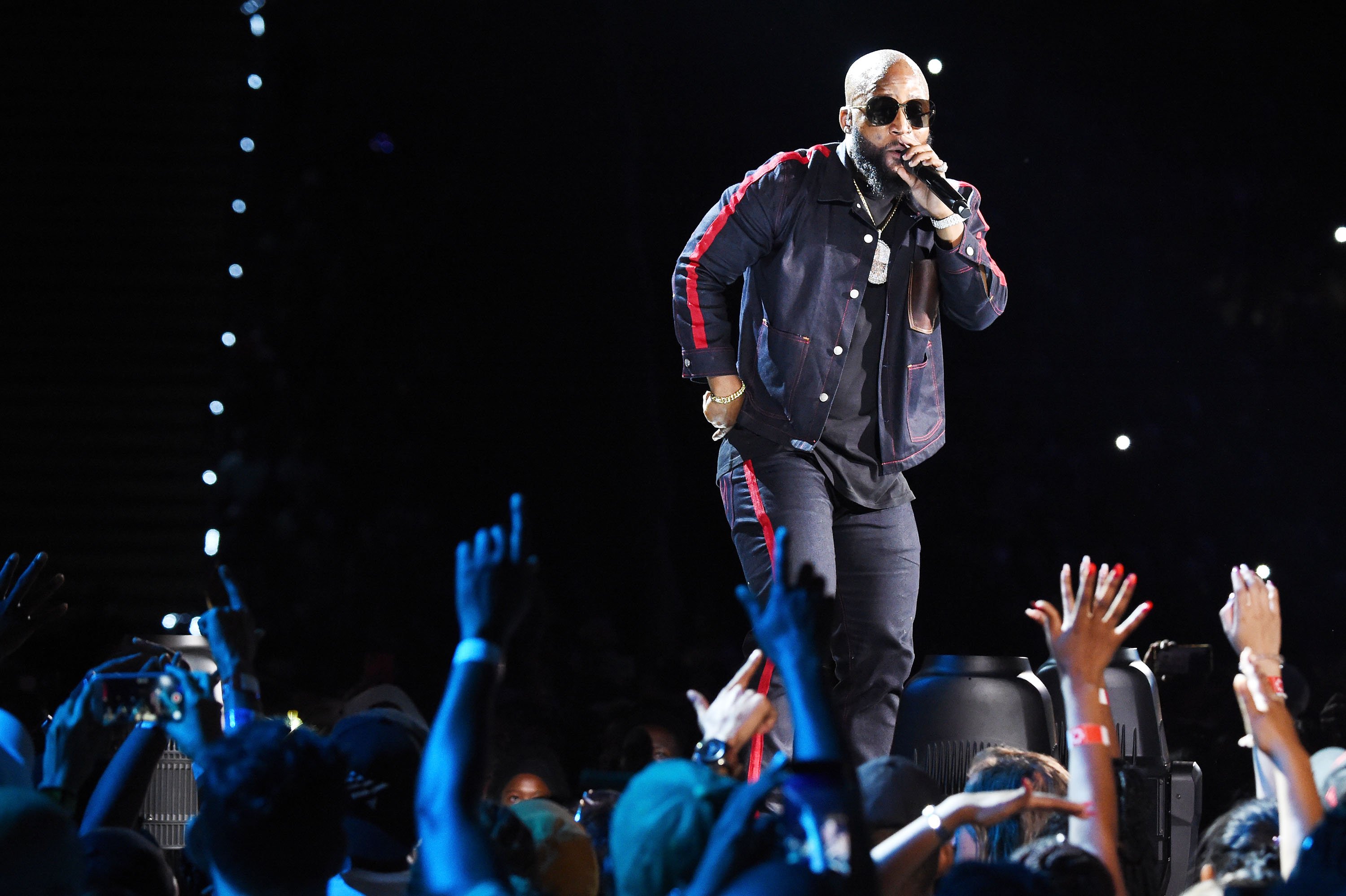 And like most crusades, a large sum of the masses were there to witness the miraculous acts that they don’t see everyday. The nearly 90 000 strong crowd sat through every formality, every pledge and every speech waiting for Beyonce and Jay Z’s closing act. 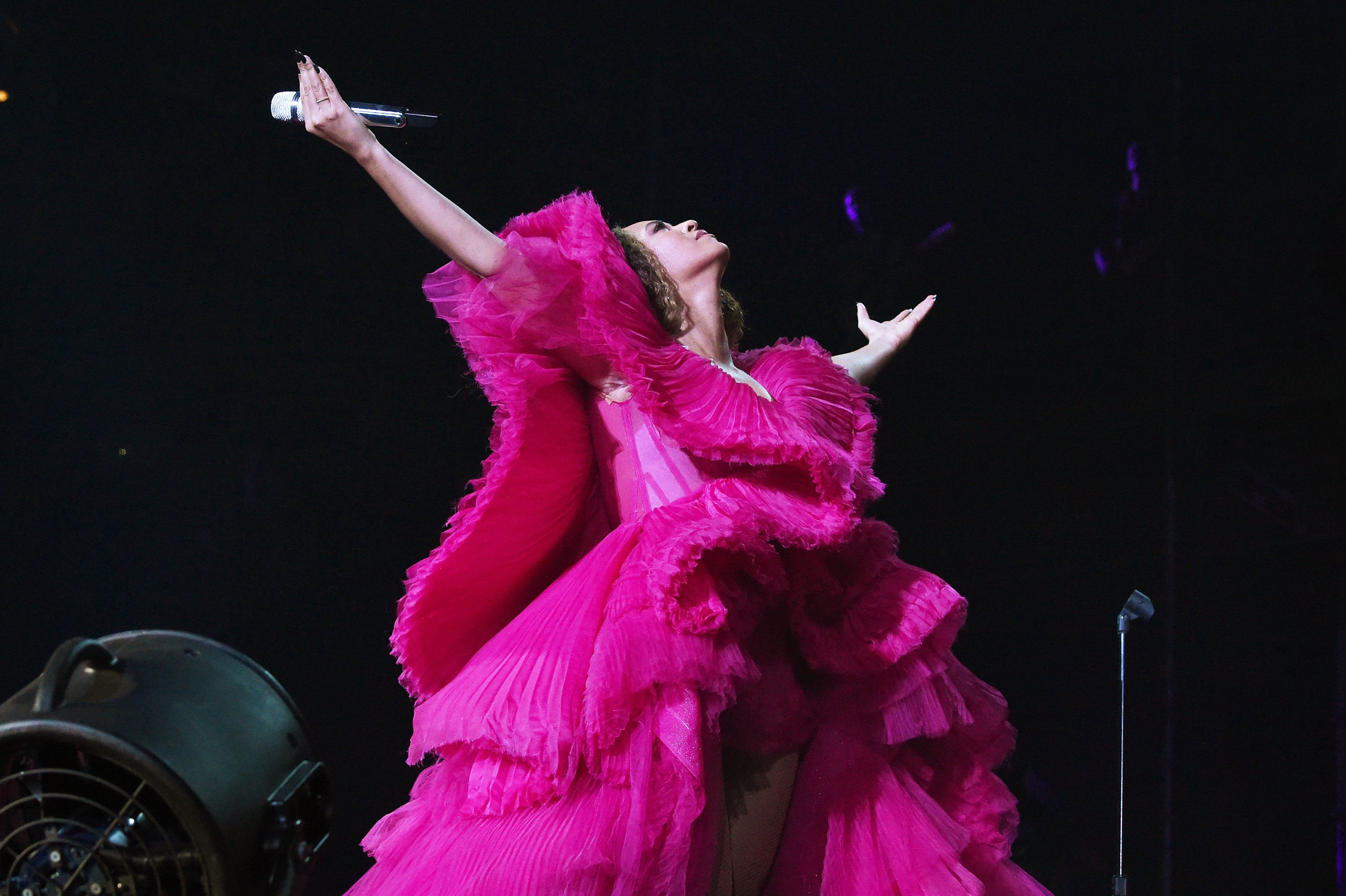 The big revelation was worth the wait according to people’s testimonies on social media and the collective screams, ululations and falling over that swept the stadium as the Carters walked off the stage after thanking the crowd for the warm welcome home.

However, the mood changed as patrons left the stadium around midnight and struggled to get home because of alleged network failures, congestion, people’s e-hailer taxi services like Uber and Taxify not working properly.

After spending up to 10 hours at a festival that has declared it wants to end poverty by 2030, festival goers were met by the reality of poverty manifesting through crime when the above factors made them easy targets for pickpockets, muggers and robbers. Some experienced this soon after walking out of the stadium to the nearby Sasol garage where they were subject to muggings and harassment while requesting uber rides. Witnesses and victims took to social media to relay how a group of men began to grab possessions or demand them at knife and gunpoint. With little police presence, and being caught off guard after the festivities, those who witnessed this attempted to run away or take cover inside the Sasol garage. Some festival goers were pulled and dragged for not wanting to let go of their possessions. The group included minors who were waiting for their guardians to pick them up. According to podcaster Whitney Greyton, who was at Sasol, the perpetrators were “literally laughing and enjoying the chaos”. Overwhelmed with the possibility of being robbed no one left the garage until their ride home was right outside. Another witness took to Twitter to say they counted 17 muggings, 2 stabbings and a smash and grab.

After these events, patrons can’t help to ask how good is a Global Citizen Festival at addressing poverty, crime, gender based violence, homophobia and other issues? How do donations of over $6 billion ensure a safe ride home? How do speeches from protected officials reach the offender at ground level? Is a festival aimed at eradicating poverty what do we need right now?

Why does it take an international blockbuster line-up for us to congregate in spite of our social standings? Why do we need to be having a good time to address our issues?

Perhaps these questions would not be as pronounced if the events after the festival had not occurred. Perhaps rewarding civilians with tickets to concerts and holidays for their good deeds is the only way to get through to people. Perhaps it is the first step toward building the underdeveloped giving muscle.