‘I was there’: Essays that map a life

‘Everything in South Africa has been mind-bogglingly spectacular,” Njabulo Ndebele wrote in 1991. He had in mind “the spectacle of social absurdity”, the excess, ruthlessness and violence that have accompanied this country’s transformation into a quasi-modern nation.

Ndebele said the era of the spectacular was coming to an end, to be followed by a turn to the ordinary. For Ndebele the “ordinary” was not the insignificant. It was a bit more than the stuff of everyday life. It was the foundation on which history itself was made. “No civilisation worth the name will emerge without the payment of disciplined and rigorous attention to detail,” he concluded.

In his latest book, Vintage Love and Other Essays (Jacana), Jolyon Nuttall provides a vibrant afterlife to Ndebele’s 1990s literary programme. The latter has seen the development of a young and dynamic tradition of storytelling, unmatched elsewhere in Africa, and the proliferation of autobiographical works. Today, some of the best accounts emerging from South Africa are nonfictional. 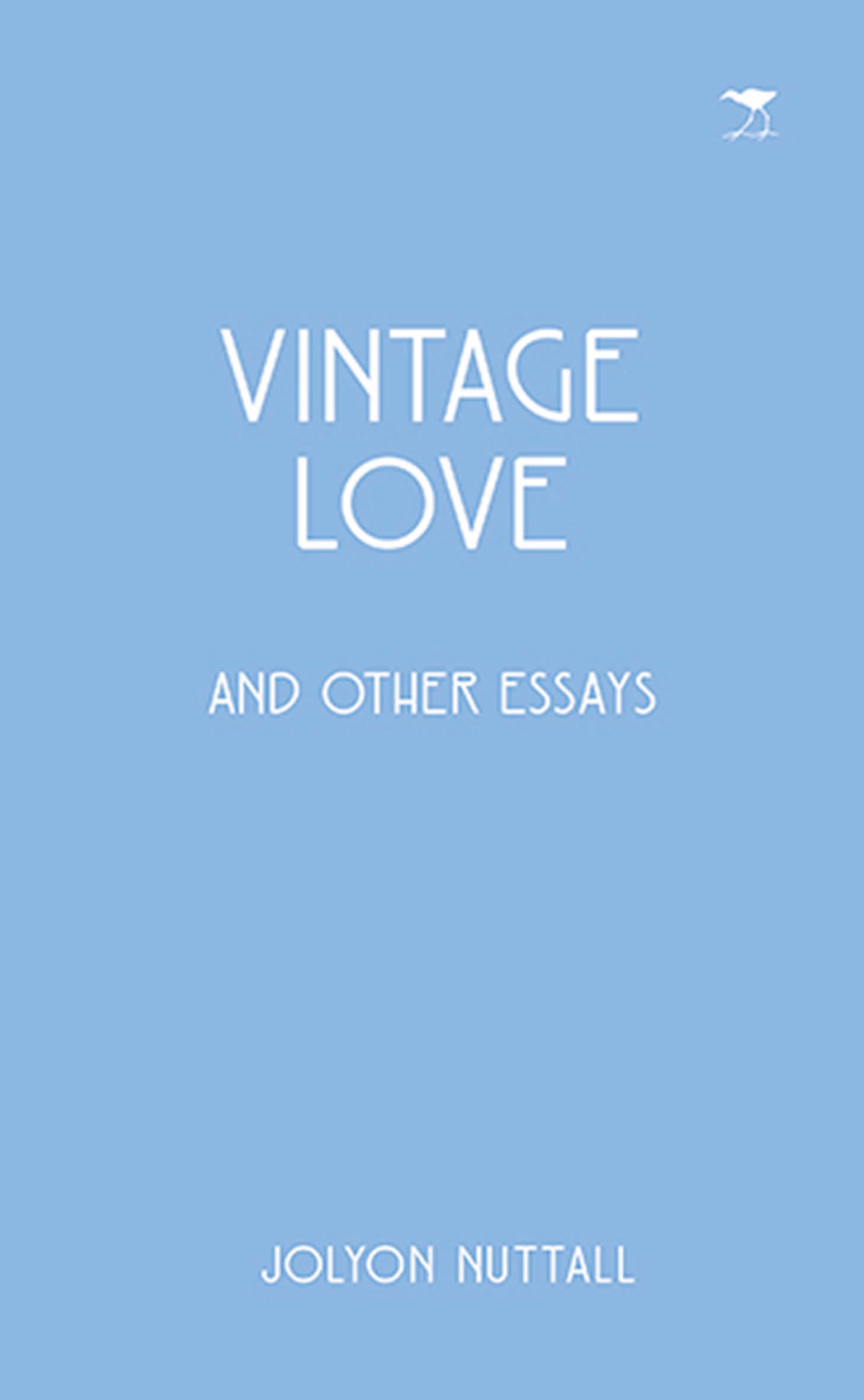 Vintage Love and Other Essays by Jolyon Nuttal. Cover: Supplied by Jacana.

In this chorus, Nuttall’s voice and style are strikingly original. So is his preoccupation with clarity and concision, discipline and attention to detail. He not only curates his own life, he also brings to the fore the murmuring voices of society. In the process, he is fostering the rehabilitation of the ordinary and has produced a book that will find a powerful public echo in numerous households in this country. I asked him about the process of writing this book.

Why did you choose the essay as the literary format for Vintage Love?

This was a fundamental decision. I was looking for some new format in which to house my writing after self-publishing two books. I found it when I accompanied my daughter Sarah and the rest of the family to Cambridge, Massachusetts, in 2016. The bitterly cold winter encouraged neither the inclination nor the intention of walking about as a tourist. My hideaway became the Harvard Book Store.

On my second visit I wandered down a row of shelves labelled Essays and Non-Fiction Literature. At the end of the row was a small padded bankie [bench] tucked into an alcove. Those shelves and that bankie became my base for the rest of my stay.

From the shelves I withdrew volume after volume of essays by writers who were new to me, with one exception, George Orwell. However, the two books for which he is most famous, Animal Farm (“All animals shall be equal except that some shall be more equal than others”) and 1984, were not on those shelves because they were works — his only two — of fiction. Orwell was represented here as an essayist on multiple subjects drawn from his own experiences.

The more I read, the more I became intrigued by the essay as a distinct literary form that I had not recognised before. It was neither memoir nor autobiography.

(Orwell: “Autobiography is only to be trusted when it reveals something disgraceful.”) It tended to focus on specific episodes, specific people, specific periods in which the essayist had been involved. The absolutely crucial factor was that the writer was involved: “I was there. I saw it. I shot the elephant.”

So how did this play out when you started writing the essays in Vintage Love?

Everything I have included in this collection of writings happened to me. In the Orwellian sense, I was there. The focus this brought has been astonishing. Abandoned has been any sequential connection between the essays, as might have happened had I been writing an autobiography. They have not been written in chronological order.

The first essay, Can You Cook?, put my newfound format to the test at once. It dealt with an incident that occurred two days after my wife died, in 2013. We planned to move to our seaside cottage at Kommetjie, near Cape Point. She didn’t make it. A sudden illness struck her two days before we were due to leave. The packers came the next day. I came alone. With 62 boxes. I hardly knew what had hit me.

Late in the afternoon, my old neighbour came across the road and leaned on the stable door of my kitchen. I could see he was deeply concerned. Normally Eddie spoke to me in English. But he suddenly blurted out in Afrikaans, “Jolyon, gaan jy stokalleen hier bly? [Are you going to stay here all by yourself?]”

I looked at him in astonishment. Was this his only concern? I replied that I didn’t know, but I was going to try. Eddie reflected for a long moment and then, switching to English, he stabbed a finger at me and asked, “Can you cook?” It took me a full two days to realise what he was getting at: the roles of husbands and wives, the order of things. Didn’t Jolyon know that husbands should always die before their wives? They couldn’t possibly survive if the roles were reversed. I mean, they couldn’t even cook.

Not only could I cook but had been doing so in our household for years with a fair degree of competence. So, unbeknown to him, I took Eddie on and the rest of the essay is devoted to a recollection of how I won a beautiful young girl’s heart because I could cook. The essay, as literary format, stood the test exceptionally well. It proved perfect for recounting this episode in my life.

There are some 20 essays in the collection. How did you come to select the episodes?

It happened in various ways. The very next essay featured the four years we spent in Newcastle in the then northern Natal when my father was appointed as headmaster of the high school. And I say at the beginning that I find it rather extraordinary that, in looking back over a long life, my mind and its memories keep returning to those four years between 1944 and 1947.

My twin brother and I loved every moment of those years and my father, so enthusiastic to begin with, steadily grew to hate his time there, dubbing the place Poufcastle. Clearly, for Michael [Nuttall] and me, they were formative years.

There are two longer essays in the collection, The Alan Paton I Knew and A Summer in New York. Both shed light on two major South African writers, Alan Paton and Lewis Nkosi.

I first met Paton when I was 10. He was within two years of writing Cry, the Beloved Country. He came up our drive, pushing a bicycle, after a hard day’s ride from Volksrust, as part of a cycling trip between Johannesburg and Durban, on rough dirt roads.

Following him disconsolately was his elder son David, who had come a cropper on his bike and was in much need of patching up and TLC. Alan did not provide those requirements. It was left to my mother to do so and to put him on the train to Ladysmith next morning where he would join up with his father again.

My father and Paton had been friends since their student days … They were to remain friends for life, and Alan spoke movingly at my father’s funeral. My aim was to write about the Paton other people did not know about, the tougher side and the fun side.

The other, longer essay is set in 1961 and recalls the month I spent in New York with one of the brightest talents I have ever encountered. His name was Lewis Nkosi and he had come to Harvard on a year-long Nieman Fellowship as one of the journalists who made Drum and Golden City Press such lively publications.

The price of taking up the fellowship, however, was that he had been obliged to leave South Africa on an exit permit. He could not return home.

I was spending a year in New York, covering the United Nations for my home newspapers from our bureau in the New York Times. I invited Lewis to spend a month with me during his summer vacation, knocking around Greenwich Village. His was a prodigious talent but the essay reflects my sadness that his brilliance was blighted by exile.

I said in a review that the essays curate your life. Do you see it that way?

I’m no intellectual but I can see that, almost unknowingly, this is what they do. Some of the essays I wrote straight after a particular incident, hot off the press as it were. Others just came to me as I became ever more comfortable in the essay as the literary form in which I was working.

Vintage Love is published by Jacana Media and costs R240. It is available at all Exclusive Books branches during a special promotion in January, as well as Clarke’s Bookshop and the Book Lounge in Cape Town, where it will be launched on January 10, and Love Books in Johannesburg

The Blue Train: A trip of luxury, stunning vistas and scenes of devastation