Harare — More than five people are feared dead and hundreds have been arrested in Zimbabwe as the country’s security forces launched a crackdown on labour-backed protests that have resulted in looting and the closure of businesses and schools.

The protests, which Human Rights Watch said had resulted in at least five people being killed, began on Monday after President Emmerson Mnangagwa had announced a hike in fuel prices by up to 150%.

Observers said the death toll could be even higher as some cases may have gone unreported due to an internet blackout imposed by government during the police and army operations to deal with the protesters.

Hundreds of people, including pro-democracy campaigner Evan Mawarire, have been arrested across the country for either inciting people to protest or participating in demonstrations that followed Mnangagwa’s announcement of fuel hikes.

The country’s main labour body, the Zimbabwe Congress of Trade Unions (ZCTU) called for a three day stay-away, saying among its demands was for government to urgently address the economic challenges and scrap the usage of the controversial ‘bond note’, which authorities insist is equivalent to the United States dollar.

The weekend fuel hike came at a time when government employees had given a two week notice of their intention to go on strike. Doctors have also just suspended a month-long strike, after the government promised to review salaries.

At the centre of the general discontent among Zimbabweans is the erosion of their savings due to sharp inflation, which hit 30% at the end of December.

Some suburbs across cities and towns have been turned into no go area by mobs consisting mainly of youths who have set up barricades, makeshift roadblocks, burnt tyres and attacked law enforcement agents. 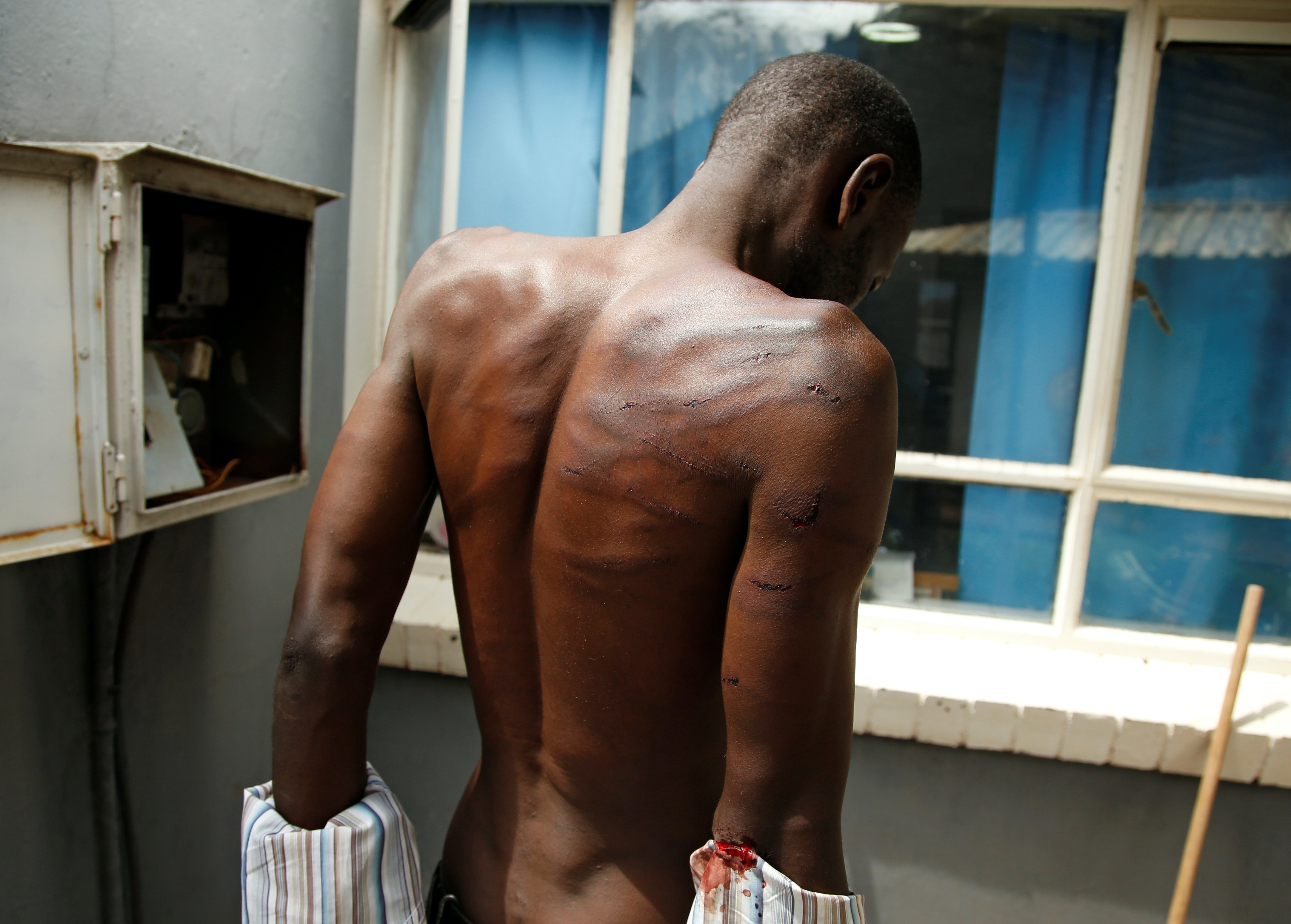 An injured detainee is seen at a hospital following protests in Harare, Zimbabwe. (Philimon Bulawayo/Reuters)

Government says one police officer was stoned to death by protesters in the second largest city of Bulawayo.

The decision by government to block internet on Tuesday did not stop the protests. Some services had been restored by Wednesday afternoon.

Zimbabwe Lawyers for Human Rights spokesperson Kumbirai Mafunda said nearly 100 people had appeared in court at the Harare Magistrate Court yesterday and more are expected to appear in the coming days.

“Several people have been arrested, including Evan Mawarire. Close to 100 people appeared at the Harare magistrates Court today,” said Mafunda.

The human rights lawyers said the police and army carried out indiscriminate door-to-door raids in some Harare suburbs, forcibly entering homes by breaking doors and windows. The security forces assaulted some occupants and, in some instances, forced residents out of their homes.

A spokesperson for the opposition Movement for Democratic Change, Jacob Mafume, said the authorities had used the cover of the internet shutdown to kill protesters.

“The internet black-out is worrisome and dangerous as it gave government blanket immunity to hunt down and kill people. We are surprised that the world is quite about the internet blackout in Zimbabwe,” he said.

He dismissed government assertions that the opposition party was behind the protests saying they were just in solidarity with the ZCTU. “We will announce our own actions in due course and we will carry them out,” he said.

MDC Organising Secretary Amos Chibaya was among those arrested on Wednesday morning.

“People have a right to demonstrate, but they should do so peacefully,” he said.

Dr Norman Matara of Zimbabwe Doctors for Human Rights said they were assisting some injured demonstrators in the latest protests. He declined to comment further, saying that the organisation will issue a statement later.

In a statement posted on twitter Wednesday, President Mnangagwa, who is on a visit to Russia said he had been saddened by events in the country.

He said wanton violence and cynical destruction is not the Zimbabwean way.

“As I have said numerous times, everyone in Zimbabwe has the right to express themselves freely — to speak out, to criticise and to protest. Unfortunately, what we have witnessed is violence and vandalism instead of peaceful, legal protests. There can be no justification for violence, against people and property. Violence will not reform our economy. Violence will not rebuild our nation,” he said.

“What will lead to a stronger economy is investment. That is why I travelled to Moscow, and that is why I will be travelling on to other countries in the region and then the World Economic Forum in Davos.”

He said in 48 hours in Moscow, there are signs that serious investment is on the way. Mnangagwa said Alrosa, the world’s largest diamond company has decided to launch operations in Zimbabwe.

“I understand the pain and frustration that many of you are feeling. Resolving Zimbabwe’s economic challenges is a monumental task, and while it may not always feel that way, we are moving in the right direction. We will get there,” he said. “In the meantime, I call for calm and peace from all of our brothers and sisters. We are one nation, with one mission, and we will realise it together.”

In a statement on Tuesday, South Africa’s department of international relations and cooperation said: “The South African government has noted protests action in Zimbabwe and is monitoring the situation. Consultations are taking place between diplomats, we are confident that the measures being taken by the Zimbabwean government will resolve the situation.”