‘The sun turned black in the middle of the battle; we could still see it over us, or we should have thought we had been fighting ’til evening. Then we got into the camp and there was a great deal of smoke and firing. Afterwards the sun came out bright again.”

This quote is taken from the account of an unnamed Zulu soldier who witnessed the annihilation of the British army on the rugged slopes of the Isandlwana hill. Eleven days after the British launched their invasion of Zululand, the moon covered the sun, plunging the battlefield into darkness, a ring of fire burning in the sky.

Sonic historian Mbuso Khoza returns to this prodigious arena and, in Islandlwana: The Musical, he uses a marriage of art, history and research to explore old songs that record history.

“Music is a scroll for the nation,” he explains. “Simply because, in the old days when our great-grandmothers and our great-grandfathers were composing these songs, it was not because they were only having fun. Historical moments were captured in song. When these songs are sung by the next generation and that generation passes this music to the next, it is a means to safeguard and protect and ascribe value to the culture and the heritage.

“It would be sad for researchers to only focus on written research, without paying attention to what songs were being sung at that time. Songs allow one to focus on the linguistic segments, the richness of the language, the historical background and the melodies … because melodies change over the years.

“And what causes those changes around the melodies? Is it the colonial system? The churches? How did this change the manner in which people sang?

“When you go back to the 16th century, during the times of uMalandela, who is the father of uQwabe noZulu [predecessors to the Zulu kingship], you would be surprised to hear how deep the melodies were at that time and, compared to now, post-1879 [the Year of Spear], how that music has become anglicised. Music is one the best and [most] effective methodologies to instrumentise our culture and heritage.” 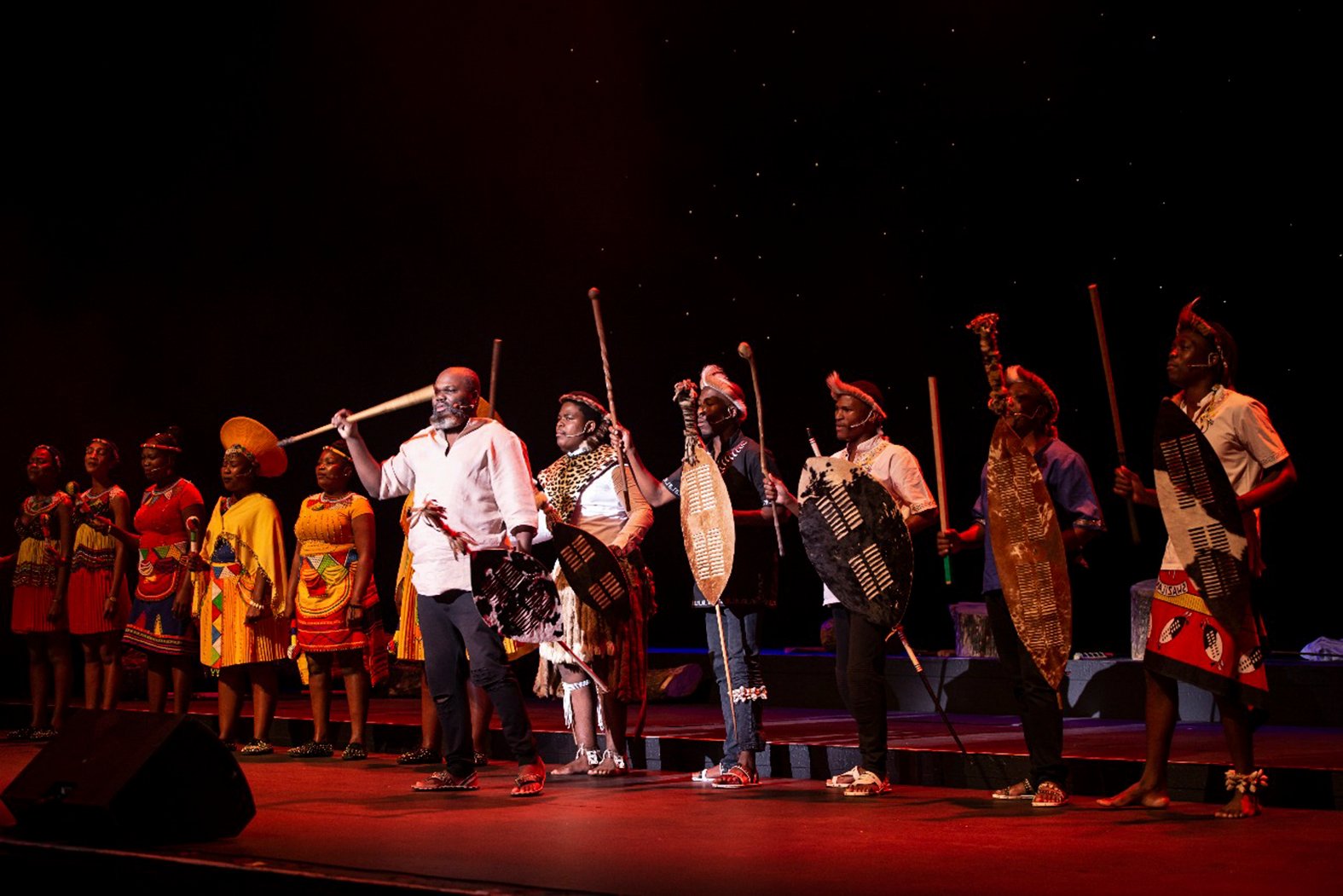 Victory: Mbuso Khoza says the story of Isandlwana is one of a straightforward military defeat, not of supernatural intervention, and it needs to be told as a ‘South African triumphant event’. Photo: Sbonga Gatsheni

With the African Heritage Ensemble, a choir of 16 voices, Khoza aims to draw from Isandlwana not a story of Zulu valour and triumph, but rather a story of oneness. Of unity.

According to Khoza, the story of the battle is “a very, very straightforward story when you read about it”.

But time, myth and the fragility of whiteness have softened the demarcations between fact, feeling and fiction.

Western accounts speak of a powerful inyanga who strengthened the Zulu battalion; herbs and tinctures made of marijuana that healed wounds in miraculous time, and a snuff made from, powdered red shrooms, which endowed the battalion with blind bravery and a frenzied strength.

In some accounts, the eclipse prophesied Cetshwayo’s defeat. In others, it marked him triumphant. Many of the mythicised elements boil down to this deep disbelief that a “superior” and sophisticated British army could meet its end at the sharp point of a Zulu assegai.

The bullets must have melted, blocking the barrels of the guns. The ammunition cases, for some reason, refused to open. Anything but a strategic defeat dealt by the children of Mthaniya.

“Myself, I had a great-great-grandfather, two, if not three, [fighting at Isandlwana]. General Commander Ntshingwayo Khoza and Bhejane kaNomageje Khoza, just to mention a few.

“When I decided to stage this musical lecture, the main objective was to point out a few things that maybe we can learn as a nation, such as oneness or unity. Selflessness. Because it is said that, when they were preparing for this battle, the heads of the houses called their first-borns, their heirs, omafungwase, and they told them, ‘If we do not come back from this battle, please take care of our homes. We are going to fight for our future. We are going to protect our land. To protect our heritage. To protect our language.’ Not dissimilar to the youth of 1976.

“It’s entirely not about the glorification of the Zulu nation. This story should be positioned as South African heritage. As a South African victory. As a South African triumphant event … The importance of uniting. Why do we still suffer from tribalism when the colonisers still see us as kaffirs, as monkeys?

“This particular event seeks to gauge interest from members of the audience. Do we still see the need to relook at our history and find a common place as abantu abansundu, abesuthu, brown people?”

Presenting this question as a music lecture requires some negotiation. Posing the questions himself, Khoza has no character to obscure him, no puppet to speak his words.

“I think the beauty of a music lecture is that you don’t go on stage to act your culture. As a heritage student, I have visited many heritage sites, especially in KZN [KwaZulu-Natal]. But when you sit there, it’s so sad. People are acting their culture.

“I recently went home to attend umemulo [a coming-of-age ceremony for girls] and people are just themselves. There’s something to be learnt from the everyday activity.

“I took a conscious decision that, as I work towards that lecture, I am that grandmother or grandfather who taught history by naturally narrating it. I’m not going on stage to act; there are no prescribed lines or gestures. I am myself, narrating history, singing about history, talking about the composers, about why they felt the need to compose these songs.

“When you present a music lecture, you are carrying the burden to be more concerned with what really transpired during those times. You are not trying to impress or entertain; you are just there to convey a message from history. I cannot just perform what I think or wish had taken place. I have to present what happened according to history — after critical research and the tested degree of probability and possibility of what happened, not just what my grandmother says, but a weighted comparison.”

Khoza decided on this form while researching amahubo (songs) of the 17th and 18th centuries. He saw amahubo as aural archives ciphered with historical possibilities and other ways of being.

“Amahubo are the songs of the ancients. They are at the centre of our spiritual lives, our historical lives. Even our religious lives. I associate them with a time when black people were in control of their destinies. They carry messages of the past, warning us about the present.”

And what of the eclipse less than 30 minutes before the British were defeated, the colours of Queen Victoria swept away in the bloody swell of the river?

“Maybe it was a sign that God no-Khokho were saying, it is done. Before the battle took place, as it was about to begin, Njengabantu Ngubane, who handled all King Shaka’s spears, saw a dark cloud rolling towards him.

“The cloud transformed into the shape of King Shaka himself. Njegabantu screamed, ‘Ilembe seliphakathi kwethu, uma nehluleka nobe niyi zinja’. He went to Ntshingwayo kaMahole and told him what he had seen. So ilanga malicisha, it was sign that it is done.”

Isandlwana Lecture: The Musical is on at the Joburg Theatre, 63 Civic Boulevard, Braamfontein, Johannesburg, on Friday and Saturday. Tickets were sold out on Wednesday

Black artists must hitch their wagon to BEE