Queers and the allure of gangs

Squeezed into her favourite red mini-skirt, Leslie van Rooyen, a sex worker at the time, ended her evening’s work and made her way to a Woodstock house, well-known then as a Hard Livings (HL) gang stronghold.

Not long after arriving, however, the drug run she and a few others had planned was foiled when the house was attacked and infiltrated by members of the vigilante group People Against Gangsterism and Drugs in Cape Town.

“I was in shock, because I saw my friends on the ground. Dead. One gangster and two sex workers, ook moffies, killed,” she says.

Van Rooyen was one of a group of transgender women who “did things like hide drugs and guns and drive around” for the Manenberg-based Hard Livings gang, “always in rokkies en lang hare [dresses and long hair]”.

“The Staggies and the HLs would always pay for my wigs and my dresses and all these things. It was me, Nicky, Zoë and them. All of us. There were five of us,” she says of her close-on 20 years’ affiliation with the gang.

“Dit was baie easy vir my om weg te gekom het [It was very easy for me to get away with things]. Cops wouldn’t suspect me. Also, I am a fast runner, I can fight good, I know when cops are coming and I can disguise myself in the crowd,” she says of the reasons she was chosen by the gang.

Van Rooyen adds that joining the gang as an official member was not something she wanted to do, “because it would have put our lives in extra danger, especially from other gangs”.

There is also the fact that, given the hypermasculinity that characterises gang culture, becoming a bona fide member might not have been an option for her.

Vanessa Panfil is the author of The Gang’s All Queer. For the book, published in 2017, Panfil interviewed 48 gay or bisexual male gang members between the ages of 18 and 28 who lived in or near Columbus, Ohio, in the United States.

In an article for the online publication, The Conversation, Panfil explains: “Some of the gang members were in gangs made up of primarily gay, lesbian or bisexual people. Others were the only gay man (or one of a few) in an otherwise ‘straight’ gang.

“Then there were what I call ‘hybrid’ gangs, which featured a mix of straight, gay, lesbian and bisexual members, but with straight people still in the majority.”

She found that, even among those who belonged to gay gangs, “some would … patrol each other’s masculinity, insulting other gay men who were flamboyant or feminine”.

As to what Van Rooyen’s reasons were for entering into the dangerous underworld of gang activity, albeit in only “assisting them”, she laughs, matter-of-factly: “Security. You always have security. People secure you. Like, everywhere I go, I have bodyguards.”

This security is needed, she says, because the situation for transgender women in Manenberg is “very, very hard”.

“Many trans people are attacked in Manenberg. Last year, a transgender woman, 19 years old, was killed by five HLs. They even had their dog — one of those pit bulls — bite into her genitals. There are a lot of attacks on trans women. It’s very hard for us.

“Because of this and the security being gang-affiliated has, gangs are alluring for a lot of trans women,” she adds.

“This happens in many [such] areas, but we know that in the Retreat and Lavender Hill area, there are many gay people connected to gangs in some or other form. They either know the gangsters well or do running or delivering. The benefit it has for them is safety. They feel that they can walk anywhere and not be harassed or violated in any way, because of their connections to the gangs,” says Cox.

She adds that transgender women and gay men are “less likely to be targeted by the police, because they wouldn’t suspect someone like that of being part of a gang. It’s sad that this is an avenue for safety and not becoming a target for violence.”

According to Panfil, for the gay men in straight gangs, “being effeminate was a nonstarter; they were all careful to present a uniformly masculine persona, lest they lose status and respect”.

Leslie maintains, however, that for those on the periphery of gang activity, the same rules do not necessarily apply.

“Gangsters aren’t into moffies in male clothes. They are into transgender women. It’s better for [trans women] to get away with things. Even with sex, it’s better for them,” she says.

Ricardo Jansen* is a Cape Flats-based queer rights activist who says “especially trans women” are favoured by gangs. “It becomes a give-and-take. Because trans people, like gay people, seek validation and love and acceptance. All these things that elude them in these spaces, they find with people that society has already written off.

“And I think it’s that mutual thing of people finding each other. You know, mense wat almal afgeskryf is deur society [people who have been written off by society]. You would hear stories where they would talk about these men and being part of these men’s existence. Stories of them carrying guns and protecting these men.

“One spoke of how she fell in love with this man and one day he was shot dead and she really felt like her world fell apart. She is still not herself today. Because she really loved him.

“And, you know, for an outsider like me, you’re sitting there thinking, ‘Oh my God, you’re talking about this man that everybody is afraid of and yet you were able to find these things about that man that spoke to something beautiful.’ I think there are a lot of such cases and again it comes down to people looking for love.”

Zain Nazier is the founder of Your True Colours Safe Space One, a self-empowerment initiative for queer people on the Cape Flats. 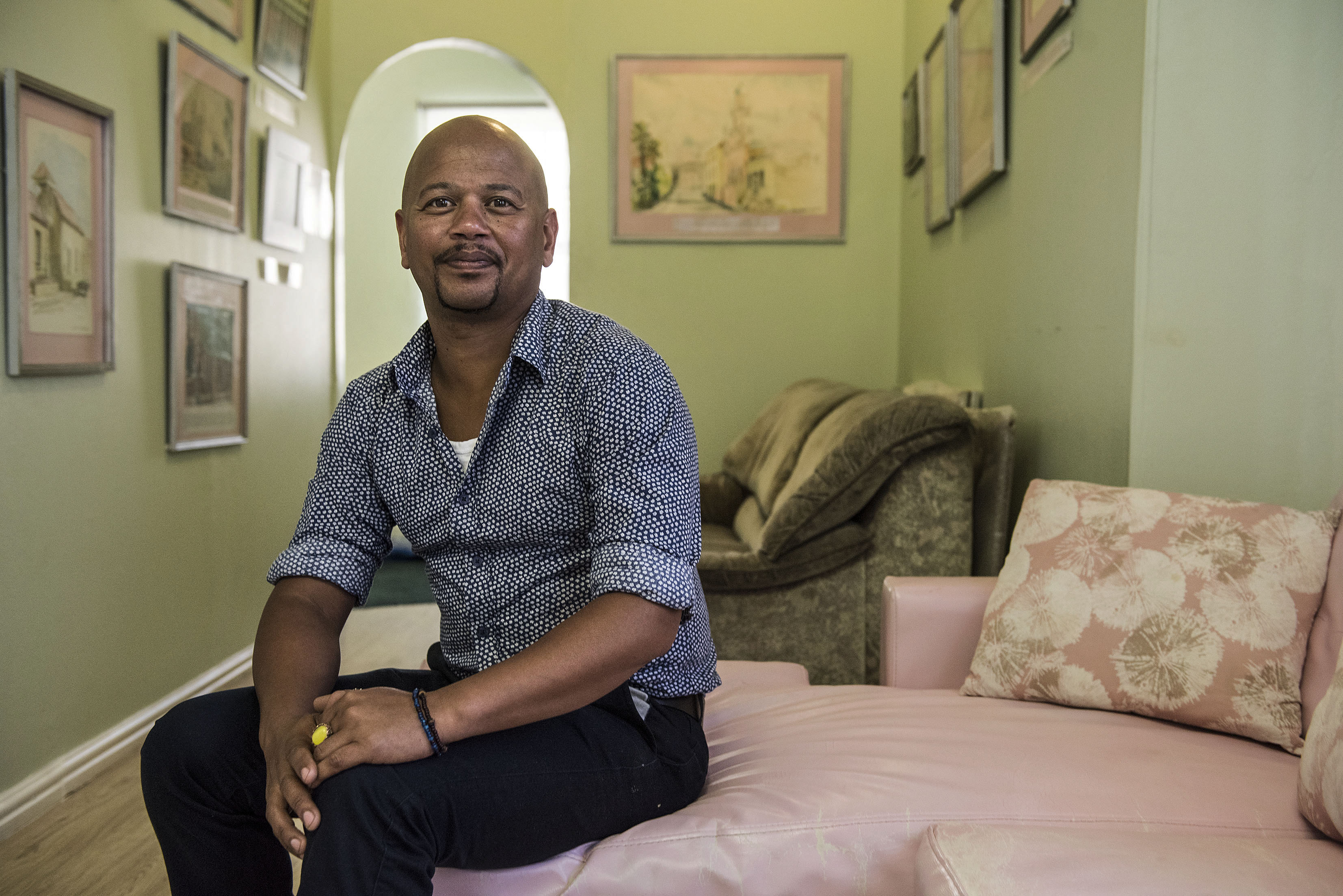 Zain Nazier started the Your True Colours Safe Space One initiative on the Cape Flats to help queer people empower themselves. (David Harrison/M&G)

Nazier says, for many queer people, particularly trans women who generally struggle finding employment, gang affiliation is often “a matter of survival; of sustaining yourself”.

He adds that some of the young people who are part of the initiative have admitted to gang affiliation.

“They say they won’t go back but habits are hard to break,” he says.

“It’s disempowering for them.

But at that point in time, you feel loved, like you are being taken care of. You have got money in your pocket, jy’t jou tik lollie [you have your pipe for smoking meth] or whatever. It’s also part of the thing of queer people being rejected and here you find somebody that’s loving you for who and what you are without judgment. And that in itself is empowering.

“But it is disempowering at the same time. That empowerment comes at a cost: your life. Or until the person wakes up and decides, ‘I need to do something with my life.’”

In 2010, Van Rooyen decided to do something with her life and established the Manenberg-based queer organisation, now called Youth 4 Change. 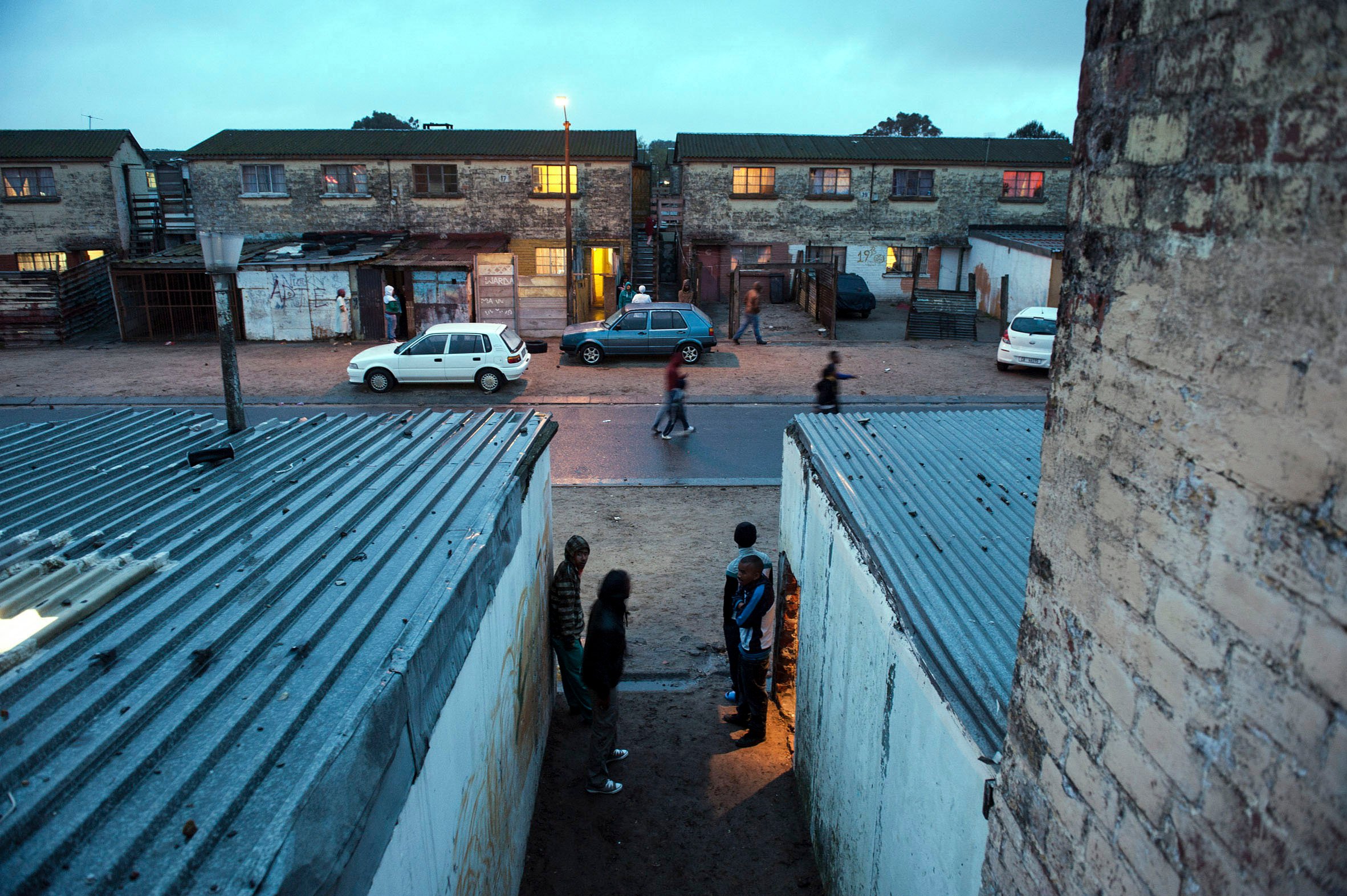 Swapping her favourite red mini-skirt for men’s attire was not an easy choice. Her safety and the success of her organisation are the main reasons for the decision.

Of her reasons for ending her gang activities, Van Rooyen says: “I am still friends with them but I was tired of it. I was really tired of it. And how people label me. Because if you run an NGO [nongovernmental organisation], you are not allowed to be involved with gangsters.”

There was also an ever-present violence and the threat of death.

“I have been attacked so many times — stabbed, thrown with bricks,” she says, pointing out the scar on her face. “Ek was altyd ge-torture deur die Americans en die Clever Kids [I was always tortured by rival gangs, The Americans and the Clever Kids].

“There was a time when I could not come into Manenberg. I had to stay in Johannesburg for six to eight months. I had to run for my life. Otherwise they would torch our house and my grandmother would get killed. So I had to run. In the end, I was just really tired of it all.”