The best paying degrees to study

The state and the private sector remain the biggest employers for graduates, and a small number go into civil society organisations, become self-employed or work in family businesses.

Those graduating in science disciplines, education and engineering seem to secure jobs quicker. Graduates who decide to pursue honours degrees are at a greater advantage of securing employment.

These are some of the findings that come out of universities’ graduate exit surveys. Most of the higher-education institutions conduct these surveys every year to provide insight into where their graduates go after graduating, which sectors they work in and how much they earn.

The Mail & Guardian asked all 26 public universities in South Africa to share their latest graduate exit surveys and only three — Rhodes University, Sol Plaatje University and Walter Sisulu University — indicated that they did not conduct surveys.

A spokesperson for Rhodes, Veliswa Mhlophe, said the university was in the process of developing such a survey.

Kashini Maistry, of the four-year-old Sol Plaatje University, said the university was yet to track its graduates’ employability.

The spokesperson for VUT, Mike Khuboni, said, depending on the discipline of study, for some of their graduates it takes two to three years to find employment. In some cases students end up getting jobs that do not match their field of study.

“Students are so eager to get a job after graduating, therefore they sometimes grab any job they find for the sake of working,” said Khuboni.

The senior director of institutional planning, evaluation and monitoring at UJ, Denyse Webbstock, said the university’s 2018 survey, which looked at graduates from 2015, 2016 and 2017, showed that 65.5% of their graduates found employment within three months, 83% within six months, 92.8% within a year and 74.4% of graduates found work in the industries that matched their field of study.

“Respondents who studied education, law and health sciences have the largest proportion of respondents working in the same field as their studies. It seems the longer the students take to find a job, the higher the probability that graduates will move to areas of work outside their direct field of study,” said Webbstock.

Although the majority of the university’s graduates are employed in the private and public sectors, 7.1% are employed in international companies, 2% are self-employed and 4.8% work at academic institutions. 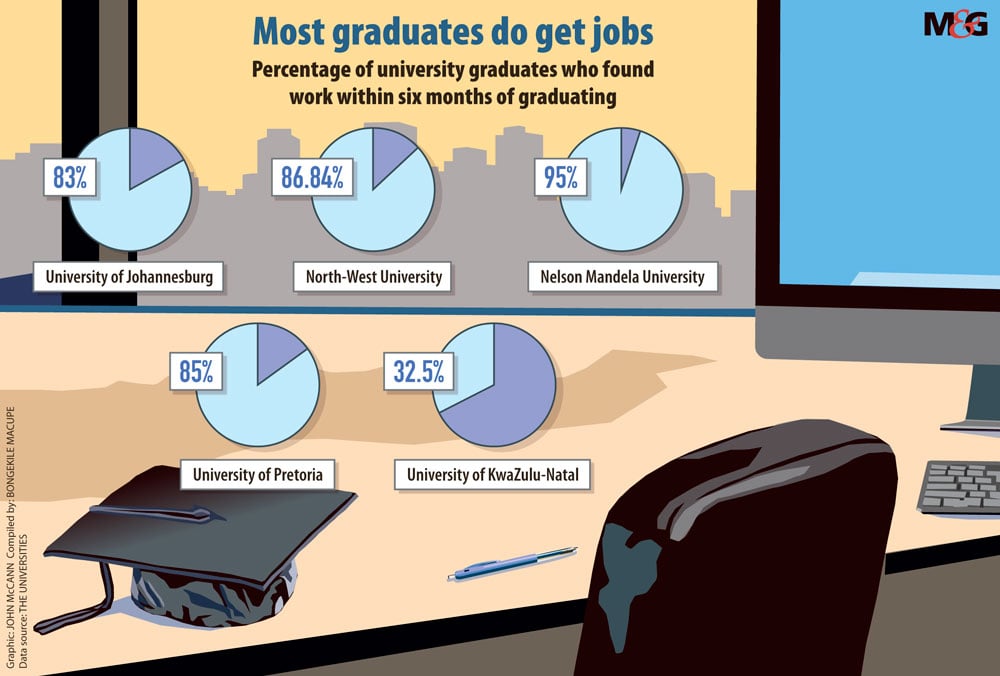 The spokesperson for NWU, Willie du Plessis, said 86.84% of students who graduated in 2015, 2016 and 2017 found work after six months and the majority of them after five job applications. At times some filled in more than 40 job applications before getting a job, whereas others found work without even applying.

The majority of students from MUT opt to study further after graduating, according to the spokesperson for the university, Bheki Hlophe.

But among chemical engineering and biomedical sciences graduates, 69% and 87% respectively typically find work within three months of completing their studies.

Hlophe also added that most of the university’s graduates find employment at state-owned enterprises such as Eskom, Transnet and Umgeni Water.

At SU, the top five fields that secure graduates jobs are education, law, economics and management sciences, science and engineering. Of these, 62.3% of graduates are employed in the private sector, 14.14% in government, 0.52% in the nongovernmental organisation sector and 2.62% in family-run businesses. This is based on data from December 2017 and March last year.

The 2017 UCT graduate exit survey, the latest survey, showed that the employment rate of the university’s graduates stood at 47.6%, 33.2% of graduates were studying further and 10.7% were still seeking employment.

The NMU conducts its survey every two years and, according to the latest survey, which was in April 2017, 95% of graduates found employment within six months after completion of their studies, said spokesperson Zandile Mbabela.

Graduates pursuing programmes in the faculties of education, health sciences, law, engineering, the built environment and IT secure jobs soon after graduating and most of these jobs are in the private sector, she said.

Of those who graduated between March 2017 and July 2018 at Wits, 97% found jobs within six months of completing their qualifications and 67% found jobs during their studies or before completion. Only 1% of Wits graduates indicated that they are self-employed.

Although it may seem that graduates are finding employment, thousands of graduates are still left unemployed and since 2017 these graduates have voiced their frustrations with protests.