A Nairobi-bound Boeing 737 crashed minutes after an early-morning takeoff from Addis Ababa Sunday, killing all eight crew and 149 passengers on board, including tourists, business travellers, and at least one delegate to a UN meeting.

Amid a global stream of condolences, many gathered in tears at Nairobi’s Jomo Kenyatta International Airport (JKIA), as the victims’ identities started to emerge.

“It is with deep sorrow that I announce that my dear wife, Blanka, son Martin and daughter Michala, died in the air disaster in Addis Ababa this morning,” Slovak MP Anton Hrnko wrote on Facebook.

People from 35 countries and one UN passport-holder were on board flight ET 302 when it ploughed into a field 60km southeast of Addis Ababa on what the airline’s CEO Tewolde GebreMariam labelled a “very sad and tragic day”.

An eyewitness said the plane came down in flames.

“The plane was already on fire when it crashed to the ground. The crash caused a big explosion,” Tegegn Dechasa recounted at the site, littered with passenger belongings, human remains, and airplane parts around a massive crater at the point of impact.

“I was near the river near the crash site. Shortly after the crash police and a fire crew from a nearby air force camp came and extinguished the plane’s flames on the ground,” Dechasa said.

The plane is the same type as the Indonesian Lion Air jet that crashed last October, 13 minutes after takeoff from Jakarta, killing all 189 people on board.

Foreign governments said tourists, business people, doctors, and a Kenyan football official were among the dead.

Also on board was at least one staff member of the UN Environment Programme meeting in Nairobi from Monday for an annual assembly of 4 700 heads of state, ministers, business leaders, senior UN officials and civil society representatives.

“As many of you have already heard, at least one of our colleagues is unaccounted for,” UNEP acting head Joyce Msuya said in a message to staff, adding more losses are feared.

Ethipian Airlines said the plane had taken off at 8.38am from Bole International Airport and “lost contact” six minutes later.

It came down near Tulu Fara village outside the town of Bishoftu.

The carrier, which changed its logo on Twitter to black and white from its trademark green, yellow, and red, said “there are no survivors”.

“We can only hope that she is not on that flight,” Peter Kimani, who had come to fetch his sister at Nairobi’s JKIA, said after news of the disaster reached those waiting in the arrivals hall.

Loved ones were later brought to the onsite Sheraton Hotel where they were debriefed and offered counselling. Journalists were not allowed in, but could hear sobbing from inside. 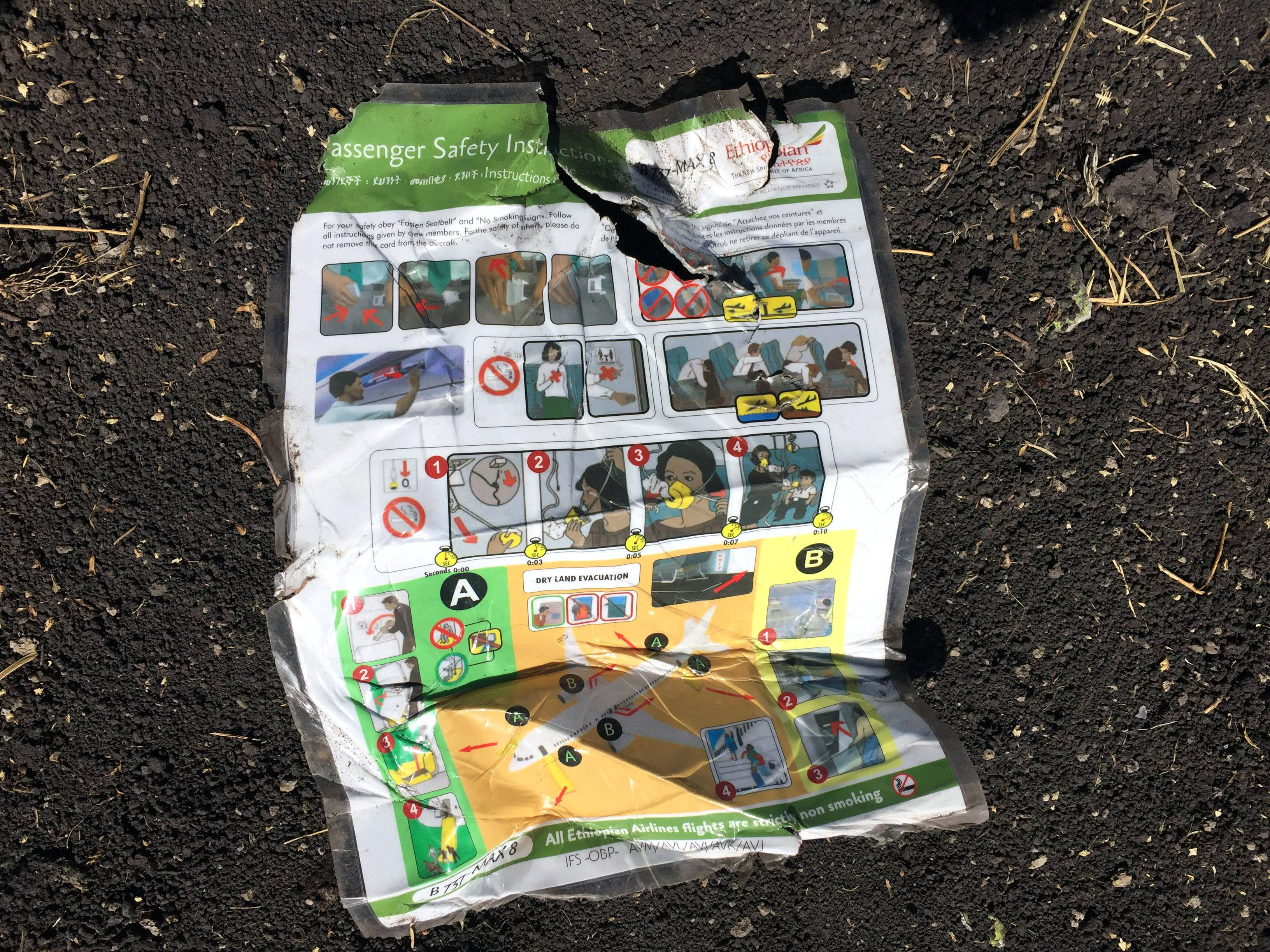 A passenger safety instruction card is seen at the scene of the Ethiopian Airlines Flight ET 302 plane crash, near the town of Bishoftu. (Reuters/Tiksa Negeri)

Ethiopian Airlines said Kenya had the largest number of casualties with 32, followed by Canada with 18, Ethiopia nine, then Italy, China, and the United States with eight each.

Britain and France each had seven people on board, Egypt six, and Germany five.

Twelve countries in Africa and 14 in Europe had citizens among the victims.

“I cannot seem to find words comforting enough to the families and friends of those who might have lost their lives in this tragedy,” Maalim said in a statement.

GebreMariam said the plane had flown in from Johannesburg earlier Sunday, spent three hours in Addis and was “despatched with no remark”, meaning no problems were flagged.

Asked if the pilot had made a distress call, the CEO said “the pilot mentioned that he had difficulties and he wants to return. He was given clearance” to turn around.

The senior captain, Yared Getachew, had some 8 000 flight hours under his belt.

Ethiopian and American investigators will probe the crash, said GebreMariam.

The last major accident involving an Ethiopian Airlines passenger plane was a Boeing 737-800 that exploded after taking off from Lebanon in 2010, killing 83 passengers and seven crew.

For one family member waiting in Nairobi there was a happy ending.

Khalid Ali Abdulrahman was waiting for his son who works in Dubai and feared the worst when a security official told him the plane had crashed.

“I was shocked, but shortly after, my son contacted me and told me he is still in Addis and did not board that flight, he is waiting for the second one which has been delayed.”

Africa updates: What happened on the continent this week

Continue to the category

Founder and CEO of Rockets, Sean Barber, talks about When to expand your business. by Standard Bank South Africa