With his hands folded on his lap, former president Jacob Zuma launches into his first Twitter moment seated in front of a grand piano. In this unsteady video, often taken too close to capture his entire posture, the piano’s white panelling clashes with his black, green and yellow floral patterned shirt. A blue-and-white porcelain pot threatens to blur into his head.

He starts: “Hello, everyone.” The infamous grin of a man some blame for wrecking the country flashes. “I have decided to move with the times — to join this important area of conversation. Because I hear that many people are talking about me and many other calling themselves Zuma in many ways.”

The handle, @PresJGZuma, had been registered the month before, in November. This was nine months after Zuma had been shoved out of office. Without the power to call official press conferences, the former president had clearly decided he needed another way to have his thoughts beamed out.

In the 100 days since he registered his account in November, he has used the social media platform to share his humorous charm, express his views on hot topics such as the expropriation of land without compensation and to respond to newspaper reports about him.

Twitter has given him a platform to speak his mind, which he does when he is not giving people roughly curated glimpses into his life. 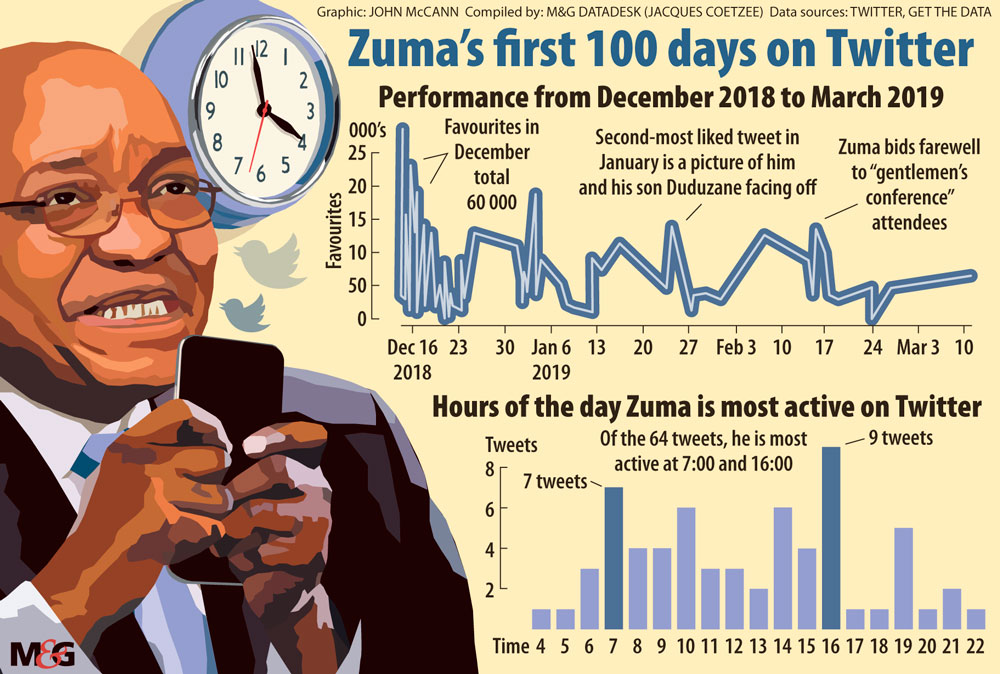 He is most active on Twitter in the early morning and late afternoon.

When there are videos, they are taken by someone else, so it is clear that he is not doing all his tweeting alone.

One tweet shows Zuma taking “relaxing” quad bike tours on his Nkandla property, for which the Constitutional Court ruled he must repay the state R7.8-million. In another, inside a mansion, Zuma and his son Duduzane face off in a mock boxing pose. The day before, corruption charges against Duduzane had been withdrawn.

This week Zuma lashed out on Twitter at a Sunday Times report about him having used spies to prevent Ramaphosa’s bid to become the president of the ANC. “I feel nothing when apartheid spies call me corrupt,” he tweeted.

His second-most retweeted post was a response to an article on the front page of the Sunday Times, which alleged that Zuma owns a “palace” in Dubai. The former president gave a tongue-in-cheek comeback, saying he wished the newspaper would provide him with the title deed and address of the house.

“Seeing as I have a lot of legal fees to pay, I would appreciate if they could provide me with the title deed and address of the house I own in Dubai so that I can sell it, because I don’t know anything about it,” he tweeted.

The @SundayTimesZA is correct that I have sold one of my properties. Seeing as I have a lot of legal fees to pay, I would appreciate if they could provide me with the title deed & address of the house I own in Dubai so that I can sell it because I don’t know anything about it pic.twitter.com/KpG5TuGYVS

Zuma has used Twitter a couple of times to take the newspaper to task, alleging that it is driven by “an agenda”. His first response was two days after his initial tweet in December, and another was in January.

Zuma also criticised an article that appeared on News24 in January this year, which incorrectly reported that his newest fiancée, Nonkanyiso Conco, had joined Twitter. The news media site then issued an apology.

One month after his December grand piano entrance on Twitter, Zuma shared his views on land in South Africa — a topic he rarely took a stance on during his nine years as president — in a two-part video post.

With a view seemingly more aligned to the nationalisation policies of the Economic Freedom Fighters, Zuma referred to “developed European countries” where, he said, property is nationalised by the state and leased to the people. One can hear papers rustling behind whoever is holding the camera.

As the May 8 general elections come ever nearer, and reports circulate that Zuma’s faction wants to return him, or a proxy, to power, this Twitter loudspeaker will surely continue to spit out statements.

Jacques Coetzee is an Adamela data journalist at the Mail & Guardian, a position funded by the Indigo Trust