The Sudanese military: A pawn of the Saudis?

Saudi Arabia has shown support for the transitional military government in Sudan since the ousting of the country’s longtime president. Observers suggest the Saudis are increasing their influence over Khartoum. But why?

Sudan’s delicate balance of power between the civilian population and the military has entered its third week. The country’s longtime president, Omar al-Bashir, has been successfully deposed, succeeded a day later by General Ahmed Awad Ibn Auf — who later stepped down in favour of Sudan’s current army ruler: General Abdel Fattah al-Burhan. Although the new leadership has announced reforms, people continue to demonstrate on the streets. They say they will continue protesting until their demands are met.

The uncertainty of the outcome has also sparked nervousness beyond the Red Sea. Shortly after the deposition, the governments of the United Arab Emirates (UAE) and Saudi Arabia declared their intention to support the Sudanese military. Over the weekend, they agreed to send $3-billion worth of aid to Sudan, including a cash sum of $500-million to be deposited directly into the Sudanese central bank. The rest is to be delivered as food, medicine and petroleum products.

Saudi Arabia has maintained interest in Sudan for a long time, says Tobias Simon, a political analyst and expert on the Horn of Africa. “The Riyadh government also supported the former regime,” he said. “They have always managed to buy followers there.” At the beginning of the year, the Saudis transferred about $2.2-billion to the Bashir regime.

Sudan and Saudi Arabia are also economically and militarily linked by the ongoing Yemeni civil war where an international alliance led by the Saudis is fighting against the Houthi insurgency. The Houthis have close ties to Iran — Saudi Arabia’s main adversary in the region.

According to Middle East expert David Kirkpatrick, by 2018 around 14 000 Sudanese mercenaries were involved in battles against the insurgents. The conflict, which is playing out on the southern-most tip of the Arabian Peninsula, is now being considered a classic proxy war.

“Sudan wants to continue participating in this war,” says Simon. “General al-Burhan has stated that Sudanese soldiers continue to be present in the international alliance, which is one of the reasons why Saudi Arabi has pledged support to the Sudanese military.” 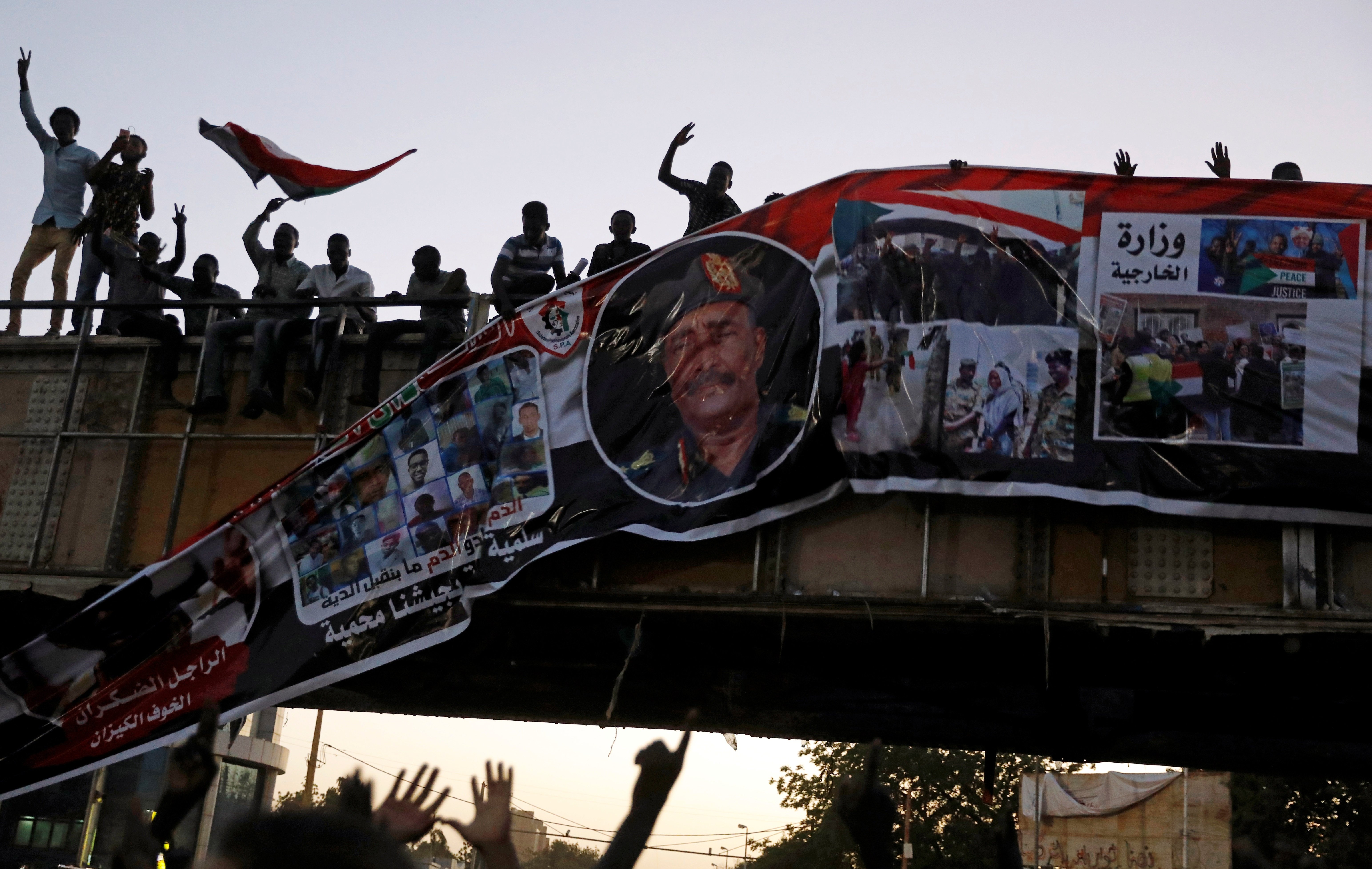 Demonstrators are determined to return the country to civilian rule. (Reuters/Umit Betkas)

But the demonstrators remain sceptical of Riyadh’s intentions. Ali Mahjoud Nathif, a member of the Communist Party of Sudan, told DW’s Arab programme Massaiya that it is reasonable for Saudi Arabia to pursue its own interests. He doubts that the interim military government would be able to make foreign policy decisions independently. “We know that, among others, General Abdel Fattah al-Burhan was involved in the deployment of the Sudanese fighters,” he said. “These groups have committed themselves to the interests of Saudi Arabia.”

According to other observers, Saudi Arabia and the UAE are likely pursuing another goal in Khartoum. “Both states have a natural dislike of popular movements,” Karim Bitar, research director of the Paris-based Institute for International and Strategic Affairs (IRIS) said. They are interested in maintaining the status quo. They fear that any rebellion or any national protest movement could trigger a landslide and spread to other regions.”

In an effort to supress social revolution in Islamic countries, Saudi Arabia is joining forces with other conservative autocratic regimes — such as the Egyptian government led by President Abdel Fattah el-Sisi, which is currently cracking down on the Muslim Brotherhood. The movement came to power in the first presidential election following the 2011 revolution. However, Mohamed Morsi was ousted as president in 2013 in a military coup. The Sisi administration’s hardline approach has been internationally criticised. Saudi Arabia has been equally disparaged for its crackdown on dissidents, particularly following the well-publicised murder of journalist Jamal Khashoggi in October 2018.

‘A clean break from the past’

It remains unclear exactly how Saudi Arabia will become involved in Sudan. Simon believes it is quite possible that Riyadh will hold back for the time being. It is clear that the demonstrators will continue to pursue their goals: “They want to entrust power to a civilian government,” says Simon. However, they not only want to make sure that the transitional military government does not hold power for a long period of time, but they also hope to prevent representatives from the old regime from returning to become heads of state. “In short, they want a clean break from the past,” says Simon. — Deutsche Welle

Dr. Kersten Knipp is a journalist and author with broad experience in Internet, newspaper, radio, television and moderation. For 15 years he has been writing about international politics and culture. At first he wrote about Romanic countries. Ten years ago, he began to learn Arabic. Since then he mainly writes about the world between the Arabian Peninsula and the Maghreb. He is convinced that the region can solve its massive problems only through a liberal policy. Therefore, he concentrates mainly on politicians, intellectuals and artists who represent liberal positions. He writes about them, talks to them, and gives them face and voice in Western media.

So far, one of South Africa’s ‘big four’ banks faces a serious allegation levelled in the Zondo report — and more revelations may follow
Africa

The Supreme Court ruling on the proposed constitutional changes, expected after three days of hearings this week, may have major consequences for the August 9 presidential and parliamentary polls.
Advertising