Small parties are shrinking – except for Freedom Front Plus

Over the past four elections the smaller political parties have been losing votes hand over fist — except for the Freedom Front Plus (FF+). The party went from nine to three seats in the 1999 election, but since then, it has maintained four seats in the National Assembly.

This is unlike similarly sized parties that have seen declines over the past 20 years.

The biggest loser has been the Congress of the People, which was established in 2008 by former members of the ANC. The party was quite popular, landing 30 seats in the first election it contested in 2009. But, after the 2014 general election, which followed wrangling over the party leadership, it was left with just three seats.

The party lost most of its seats in the 2009 elections amid internal fighting that resulted in the formation of the National Freedom Party. IFP spokesperson Musa Ngobeni described the breakaway as an “ANC-sponsored project”.

But, he said that despite losing ground in previous elections, the IFP is buoyant: “We are not going anywhere. We are here to stay. We are the only voice of reason in our current political dispensation, which has become characterised by hopelessness and despair. Our voice will remain relevant.” 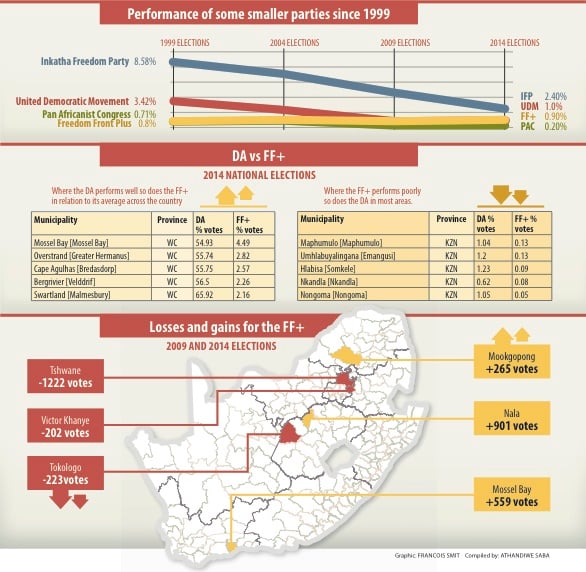 The United Democratic Movement (UDM) has the third-highest decline in support. The party has lost 71% of its seats in Parliament since the 1999 elections, dwindling from 14 to four. The UDM lost its votes in 2004, just five years after it first took part in national elections.

The UDM’s spokesperson, Jana Warffemius, blamed the ANC for its loss in support: “The ruling party made it a point of trying to destroy the UDM by using chequebook politics to lure away leaders we had groomed and so attempted to deplete our human and financial resources. Most of those defectors were rewarded with lucrative posts such as parliamentary whips, ambassadors and provincial MECs.”

The FF+, on the other hand, has steadily maintained the same number of seats it had since the 2004 elections.

Party spokesperson Pieter Swart said it was looking to get more than a million votes on May 8.

“We not only work to maintain our support base, we work towards growing it,” he said, adding that many Democratic Alliance voters were defecting to the party.

“We have real proof of the FF+ growing fast and in numbers. The results of two by-elections late last year, in George and Kroonstad, should serve as an early indicator of this and to the DA that many of its voters are defecting to the FF+.”

Another party that has seen a big decline since the 1999 national elections is the African Christian Democratic Party (ACDP), which had six seats in Parliament but now has three.

But the ACDP’s spokesperson, Jo-Ann Downs, said that, since 2016, membership figures and the number of branches had increased.

“Our national conference in February, which consists of only branch representatives, had an attendance of over 1 000 delegates,” she said.

“The best measurement of success is by-elections. We have had some great results in the Western Cape — peaking at just over 20.56% in Bonteheuwel. We had 7 000-plus [people] attend our manifesto launch without sponsoring transport. We are having our last election rally in a 55 000-seater stadium, which we expect to fill.”

Another loser is the United Christian Democratic Party, which had three seats in 1999 but now no longer has a parliamentary seat.

According to its president, Modiri Sehume, they will only contest elections in the North West province.

But, he added: “This is the only party in the country that can claim to have put blacks on the same pedestal as the best in the world, a party that successfully delivered infrastructure revolution in our country.”

Dinonofo Pico is the Eugene Saldanha fellow for social justice