Some blame the party, others blame people in the party

Xolile Tswina recalls one night at his home in Maiden Farm township on the outskirts of Mthatha: “I woke up. I think it was about 10pm this other evening. And there was a sound like someone crying. And I’m saying to my wife: ‘Ey, I don’t know if I am hearing right, but it sounds like there is someone crying.’ ”

Because there is no electricity in Maiden Farm, it is gripped by darkness at night.

“You feel like you’re alone. Because you can’t even see if there is anyone there,” Tswina says, the scar on his nose dancing as he talks.

Issues of poor service delivery have reached boiling point in King Sabata Dalindyebo municipality in the Eastern Cape. With the axe falling on members of the ANC leadership, opposition parties say the perceived instability of the ANC has opened the door for them.

Tswina, who was retrenched from Exxaro’s Arnot coal mine in Mpumalanga in 2016, moved to Maiden Farm with his wife and their two children last year.

The 44-year-old says he has always voted for the ANC but, as the countdown to the national elections ticks on, Tswina says he is not sure he will vote at all. “When Ramaphosa was elected the president of the ANC, it actually raised our hopes. But I really don’t know if I’ll vote,” he says.

Tswina says his loyalty was shaken by “the nine wasted years” under Jacob Zuma.

But his distrust in the ANC’s leadership has worsened since he moved to Maiden Farm. The residents’ frustrated efforts to secure electricity have left him feeling voiceless.

“When I started living there, I was actually interested in engaging in the issues affecting the community. I knew that the ward is actually run by the ANC and I was actually hoping that there might be someone who is willing to help, only to find out that, eish, it is tough.”

Tswina says his being out of work, and spending more time at home, has given him a newfound understanding of the neglect of the governing party. “If I was at work, I would be worried not knowing what is really happening. But now that I am here seeing that we have been left like this, it is painful.”

He says Ramaphosa will struggle to shake Zuma’s legacy: “You know we have this thing of putting the ANC under one blanket. So when you just see ANC, you get nauseous. You just feel like vomiting.”

One party hoping to win over voters frustrated with the ANC municipality is the African Transformation Movement (ATM). The party’s Eastern Cape chairperson Veliswa Mvenya said this week that the ATM has been making inroads in the province.

The party won 30% of votes in a March by-election in Nyandeni ward 21, which covers Ngqeleni and surrounding towns about 30km east of Mthatha.

“We are hoping the people in the Eastern Cape will stand up and see that the ANC has finished this province,” she said.

Mvenya said the problems facing King Sabata Dalindyebo municipality represent the “disrespect” the ANC has shown its loyal voters. “The only way to get rid of that nonsense is to vote ANC out.”

Bantu Holomisa, the leader of the United Democratic Movement (UDM), said he hopes people in the municipality “are beginning to realise that putting all your eggs in one basket will not always pay with dividends”.

The UDM has done consistently well in the municipality, coming in behind the ANC in national election results. In 2014, the party won 29.45% of the vote.

“I think voters have had enough.”

But voting statistics show that, although the UDM has increased in popularity, support for the ANC has not necessarily wavered in King Sabata Dalindyebo municipality. In 2009, the ANC won 57.96% of the vote. This number increased by almost 2% in 2014.

The South African Municipal Workers Union chairperson in the area, Lwazi Madyibi, says the problems facing the ANC-run municipality are about leadership and not the party itself.

Members of Madyibi’s union staged a fortnight-long strike of municipal workers, who called for the recall of the mayor, Dumani Zozo.

Madyibi says the decision to remove the trio was “a show of good faith”.

ANC provincial secretary Lulama Ngukayitobi said that the party took decisive action against the “chaos” in the municipality.

He said: “We made a vow that whenever we discover problems, we will act in the best interest of the people … We can’t worry about the effect it may have on elections.”

Madyibi says he has voted for the ANC every election since 1994 and, despite his battle with the leadership of the party in the municipality, he will still vote for the party on May 8.

“The good thing about the ANC is that it has good policies but, in terms of selecting leaders, that is where the problem lies,” he said. 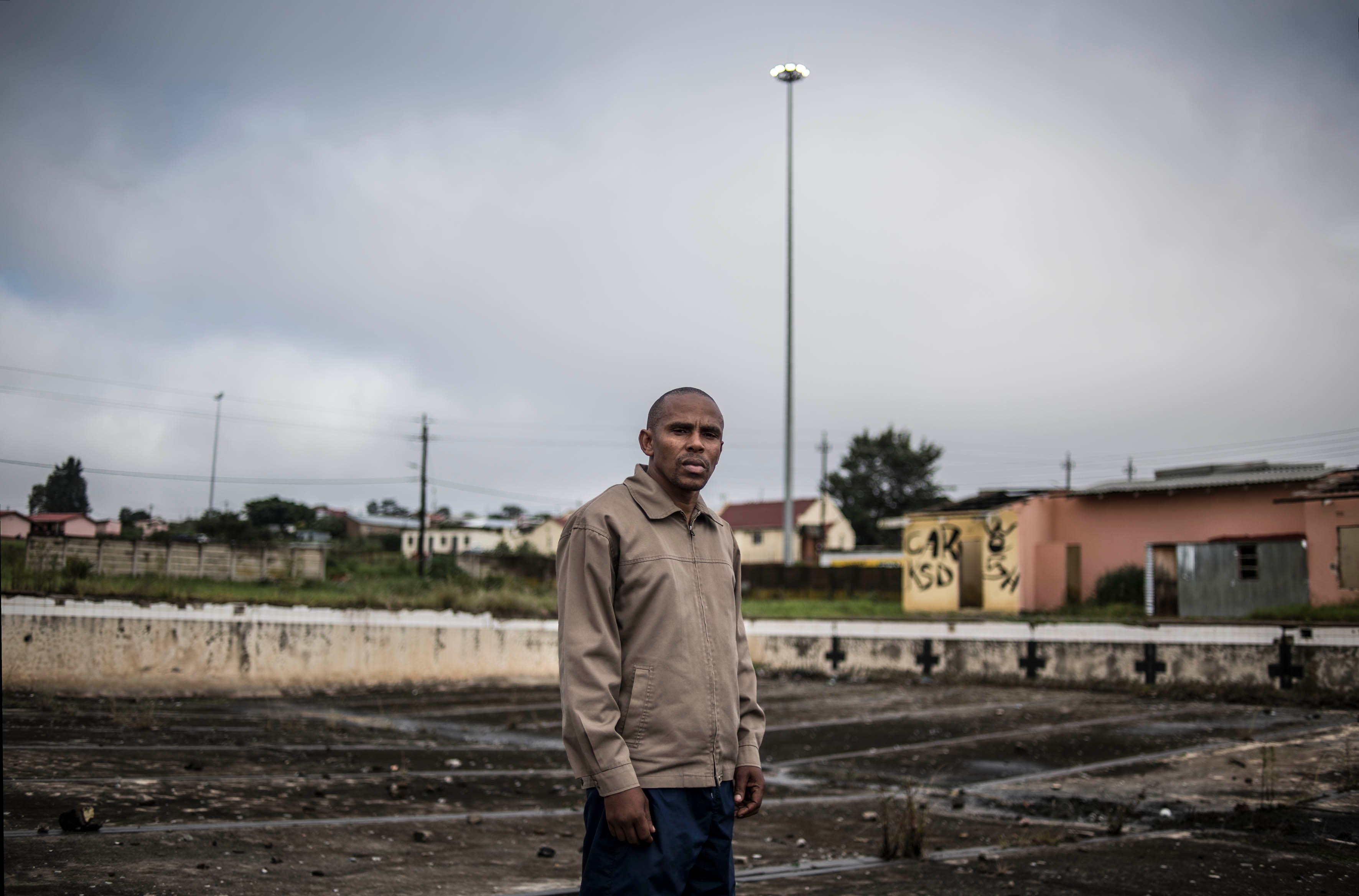 Nathi Yenga says he will continue to vote for the ANC. (Paul Botes/M&G)

He points out the empty public swimming pool he used to swim in as a child. He says none of his six children have been able to swim there.

Yenga says he feels the current state of the township means that he was more free when he was a child than his children are today. “Even if you are born here, it is not safe. You have to open your eyes wide open every time,” he says.

But Yenga calls himself “a loyal member” of the ANC. “I will vote for the ANC. It is not the ANC that put us in this position. These are selfish individuals.”

On a corner opposite the Ngangelizwe Methodist Church, a group of women, many wearing ANC T-shirts with Ramaphosa’s smiling face on them, pick at a mountain of uncollected trash.

Nontobeko Fuzani has been volunteering with the group for two weeks, working from 8am to 4pm every day. She is the only one in the group wearing a faded T-shirt with Zuma’s face on it and says there is nothing that could steer her away from the ANC.

“Even if they say that Zuma must come back, I am not going to vote for Zuma. I am voting for the ANC.”

Fuzani’s sister “has a house from the ANC. So I was not waiting for her to have a house and me at the same time. So if someone gets something, then I have to wait my turn,” the 46-year-old says. “My turn is also coming.”