It took great courage, but finally, Musa decided that he would run away. He doesn’t remember exactly when he ran. During his years in the forests somewhere in northeast Nigeria, as a Boko Haram captive, the concepts of time and space lost their meaning.

He sits now in a cream-painted room in an undisclosed location in Maiduguri, capital of Borno State and the heart of a decade-old insurgency that has pitted the Islamist militants against the Nigerian government. The air conditioner in the room struggles to work in the stifling heat. Intricate embroidery patterns on his purple kaftan momentarily distract my attention away from his distant eyes.

“My life was miserable before,” he says, the first of many heavy sentences from a teenager who has, in the past six years, experienced the trauma of war first-hand.

Musa was about nine when his world turned upside down. He was with his father in Gamboru, a market town near the border with Cameroon, when Boko Haram militants attacked. They kidnapped him. He hasn’t seen his mother since.

Children on the frontline

The first is armed assault. The group has been known to torch entire villages, hacking men to death, raping women and forcibly marrying them to jihadis, and kidnapping children. That’s what happened in Gamboru. The other is suicide attacks. It is not uncommon for children — usually from among those that have been kidnapped, like Musa — to be used to carry out these suicide attacks.

In many ways, the war in northeast Nigeria — which has spread to parts of Niger, Cameroon and Chad — is a war on children. Since 2009, Boko Haram, whose name loosely translates to “Western education is sinful”, has actively targeted schools and used playgrounds as battlefields and innocent children as collateral. 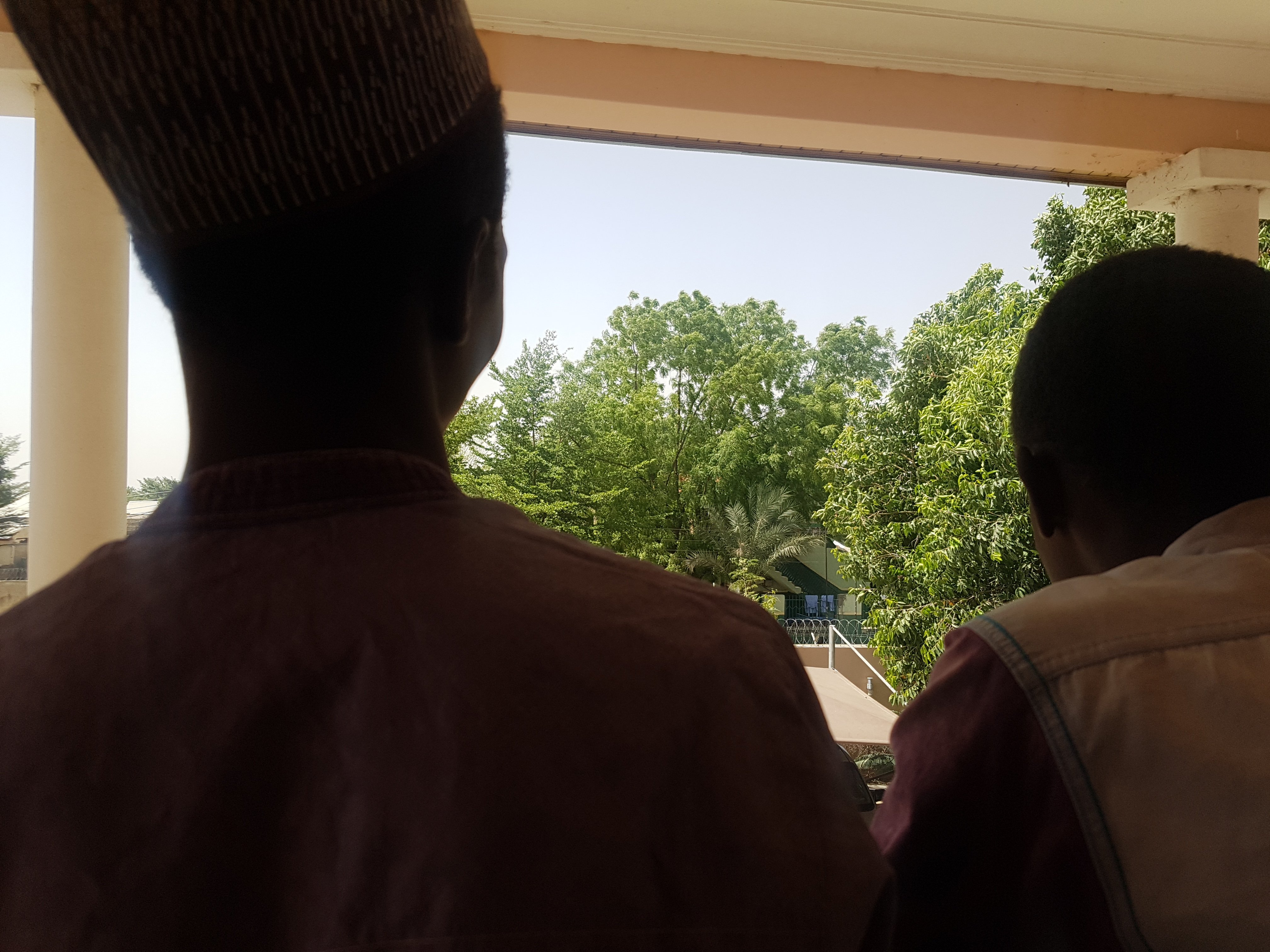 Musa and another boy who escaped from Boko Haram cells

In one especially brutal incident, on the night of February 24 2014, 58 school boys were murdered in Buni Yadi, Yobe State, while they slept in their beds. In another, in April 2014, 274 girls were abducted from their hostels in Chibok, a village in Borno State, sparking international outrage.

In 2017 alone, 881 children were killed or maimed in Boko Haram-related violence, although not always at the hands of the militant group. The Nigerian military killed more than 200 minors in a miscalculated military attack on a displaced persons camp.

About 1.4-million children have so far been displaced,1400 schools have been destroyed, and 2295 teachers killed, according to the UN.

The barbarity with which Boko Haram operates and its disregard for children’s rights has brought it global notoriety. The Chibok girls and the hashtag #BringBackOurGirlsbecame an international cause célèbre. But just last year, another group of schoolgirls was kidnapped, this time in the town of Dapchi.

Although President Muhammadu Buhari’s government succeeded in negotiating the release of most of the Dapchi and some of the Chibok girls, more than 100 girls are still in captivity, along with over 1 000 children abducted by the group since 2013.

Musa said little about his time as a captive in the Sambisa forest, a Boko Haram stronghold, or about the mechanics of his escape. We didn’t press him. “Many people escaped,” Musa says in Hausa. “We who were left behind used to hear a lot of success stories. So we decided to take the risk.”

One day, several years ago —he is not sure exactly how long ago it was — Musa and three girls decided to make a run for it. They were successful, and eventually made their way to the town of Monguno, where they were picked up by soldiers and transported to Maiduguri.

But they were not out of jail yet.

In Maiduguri, they were held in Giwa barracks, a renowned military detention facility. Musa has no idea how long he stayed there, but another teenager who spoke to the Mail & Guardian said they were kept there for up to four years.

There have been accounts of hunger and torture in Giwa barracks in the past. In 2016, at least 149 people died in the facility, according to Amnesty International, which called for it to be shut down. This included at least 11 children under the age of six.

“The discovery that babies and young children have died in appalling conditions in military detention is both harrowing and horrifying. We have repeatedly sounded the alarm over the high death rate of detainees in Giwa barracks, but these findings show that, for both adults and children, it remains a place of death,” says Netsanet Belay, Amnesty International’s research and advocacy director for Africa.

In 2018, following strong advocacy by rights groups, children aged under 18 were released from military custody into rehabilitation programmes, with the goal of reuniting them with their families. Musa was among the first batch of children to leaveGiwa barracks and arrive ata rehabilitation centre run by Unicef, the United Nations’children’s agency, in Maiduguri.

All of the children who arrived at the Unicef centre needed medical and psychological care. Many had experienced sexual abuse while in Boko Haram captivity. At the centre, trained counsellors give the children trauma care; social workers prepare to reunite them with their families.

One of these social workers is Hauwa Waziri Abdullahi, an official with Search for Common Ground, a nongovernmental organisation (NGO) working to reconcile the children and their communities. She works with about 40 minors, including Musa. She remembers being worried about him.

In his first few days out of military custody, Musa had pointedly told her he would never go to school. “What will I do with Western education?’’ he asked. Abdullahi explained that he would need to go to school if he wanted to help others as he claimed, but Musa had seemed doubtful.

That thinking is widespread. In Nigeria’s northern region, where poverty is high and literacy levels are already dangerously low, Boko Haram’s war on education has prompted many parents to disregard schools. On the streets of Maiduguri, children play loudly during school hours. Some carry bowls to beg for some coins from passers-by. Few appear to be at school.

It is not always easy to find the families of children who have returned from Boko Haram. Used to hiding their true identities to protect their loved ones while in captivity, many children will give wrong family names or conjure up villages that don’t exist. Even with accurate information, tracing relatives who may have been displaced or killed can prove impossible.

Then, if they do make it home, they must contend with the fear and the anger of neighbours who have lost too much to Boko Haram and are not ready to accommodate those they see as collaborators.

Despite efforts by NGOs, many neighbours refuse to live with Boko Haram returnees. In the town of Gwoza, for example, deradicalised former members of the group were forced to flee after villagers protested against their return.

“The people [are sometimes]like: ‘Why should I allow someone who killed my family, my brother, my loved ones, why should I be together with them?’” says Abdullahi.

Fear of what escapees carry in their heads puts communities on edge. Children are especially easy to brainwash, fiercely loyal in their innocent gullibility. Abdullahi fears for Musa: Hashe digested too much of what he had been fed?

Abdullahiis present when Musa’s uncle comes to take him home. She isn’t sure how things are going to work out for him, how he will adjust. “He is a unique person,” she says.

Then, at 5am the next morning, her phone rings. It’s Musa: he wants to check something with her. “On this page, there is a drawing of the victim cycle and the aggressor cycle,” he says, referring to a manual he had been given the day before. “I need more elaboration on it.”

Abdullahi’s surprise turns to delight. Perhaps Musa will be okay.

Abdullahi no longer worries about Musa. He attends school on a scholarship, and downloads phone apps for older people for extra income. “He can write!” she gushes, flipping open a notebook to show Musa’s improvement.

Even Musa is daring to dream. “I want to do big things…I want to be president. Or a commissioner, maybe,” he laughs, with a hint of self-deprecation. The sound is a deep rumble that erupts from his lean frame.