The man who saved a forest

Alfred Brownell, a 53-year-old lawyer from Liberia, was on his way to his daughter’s school prize-giving when he heard the news. She was going to receive an award. So, it turned out, was he.

The Goldman Environmental Prize is given annually to grassroots environmental activists, one from each inhabited continent, who show exceptional bravery in the defence of the natural world. It is sometimes called the “Green Nobel prize”. It’s a big deal.

But Brownell was so flustered that he didn’t know what to say when a representative of the prize committee called last week to tell him that he was the prizewinner from Africa for 2019.

“It was like: ‘You’re Alfred Brownell? You won the Goldman award.’ I said ‘Gold-what?’ I thought maybe Goldman Sachs … I was really shocked, I was shouting, I could not explain anything. I didn’t know what to say. I passed the phone onto my 17-year-old daughter,” he told the Mail & Guardian in a telephone interview from Boston, where he now lives with his family after being forced into exile.

When the news finally sunk in, he fell to the floor, sobbing. “I couldn’t explain that feeling. I became very emotional. It took me back to the villages, back to the communities. I thought finally their struggles, their plight — even though there are abuses and violations —the rest of the world is not going to hear about their stories. They have no face, no name, but now the world finally knows about them.”

Brownell came of age in the midst of Liberia’s civil war, a notoriously brutal conflict thatran for 15 years and left a quarter of a million people dead. It ended, officially, in 2003, leaving an indelible mark on the landscape and its people, including Brownell, who found himself drawn to the law as a means to prevent further injustices.

“The civil war that was fought, it was merely over greed. The greed for the country’s natural resources; the elites were struggling over that.”

Although he hails from among Liberia’s urban, educated elite, Brownell spent years travelling across the country in an attempt to understand what was going on in the poor, rural communities where so much of the exploitation occurs, far out of sight of the journalists or activists or even government institutions that might raise the alarm. His premise was simple: make law, not war. He offered his legal services to communities that otherwise would struggle to access a lawyer, hoping to defuse tensions and disputes through the courts before they spiralled into violence.

In 2010, Brownell took on his biggest case yet. The government had sold off 2200 square kilometres of forest land to a Southeast Asian farming conglomerate, who wanted to raze the ancient trees — and the communities who live among them — and establish palm oil plantations instead. Brownell was horrified. Did the government not understand what impact this would have on the communities who lived there? Did it not realise how important the Upper Guinean forests are to the ecological health of the planet?

“If you have a map of Africa, and you look at that landscape, you see most of West Africa is savannah and the Sahel desert area. If you look further up north, it’s all desert;the Sahara is taking over most of North Africa. But all of West Africa was once completely forests, and the only forest that is still intact is in Liberia, and that is the largest carbon sink in that region. It is the lungs of West Africa. It’s a grand fortress trying to hold off the onslaught of the Sahara in the region.

“Then it is also the home to communities and indigenous people, who have lived there for centuries. Their history, their traditions, their livelihood. They say: ‘This is our supermarket, our grocery store, our university. When we talk about our history, this is our archive.’ They can go into the forest and explain the history of the tribe, how they settled. You can walk to different zones and you get a complete history of how those communities were established. So that’s how important it is.

“It’s also about how those of us, the so-called educated elite, conceptualise these communities. So we destroy their forests and their shrines? Why? Because we believe they are indigenous communities and they have small gods that don’t compare to the gods that we worship. Because no one would dare target a church or mosque or temple, but we are free to destroy their shrines because we perceive them to be smaller people with smaller gods. We refer to them as savages. We have no respect for them.”

Brownell’s fight to save Liberia’s Upper Guinean forests made him lots of enemies. Senior government officials told him to drop it, but he kept fighting, taking the matter all the way to the Roundtable on Sustainable Palm Oil, an international body that offers a Fair trade-like certification for palm oil companies. They threatened to withdraw this certification for the companies involved in Liberia.

The threat worked — for now, at least. Although palm oil is still being produced in Liberia, a corner of the forest — about 208 000 hectares — was saved,thanks to the efforts of Brownell and his team. 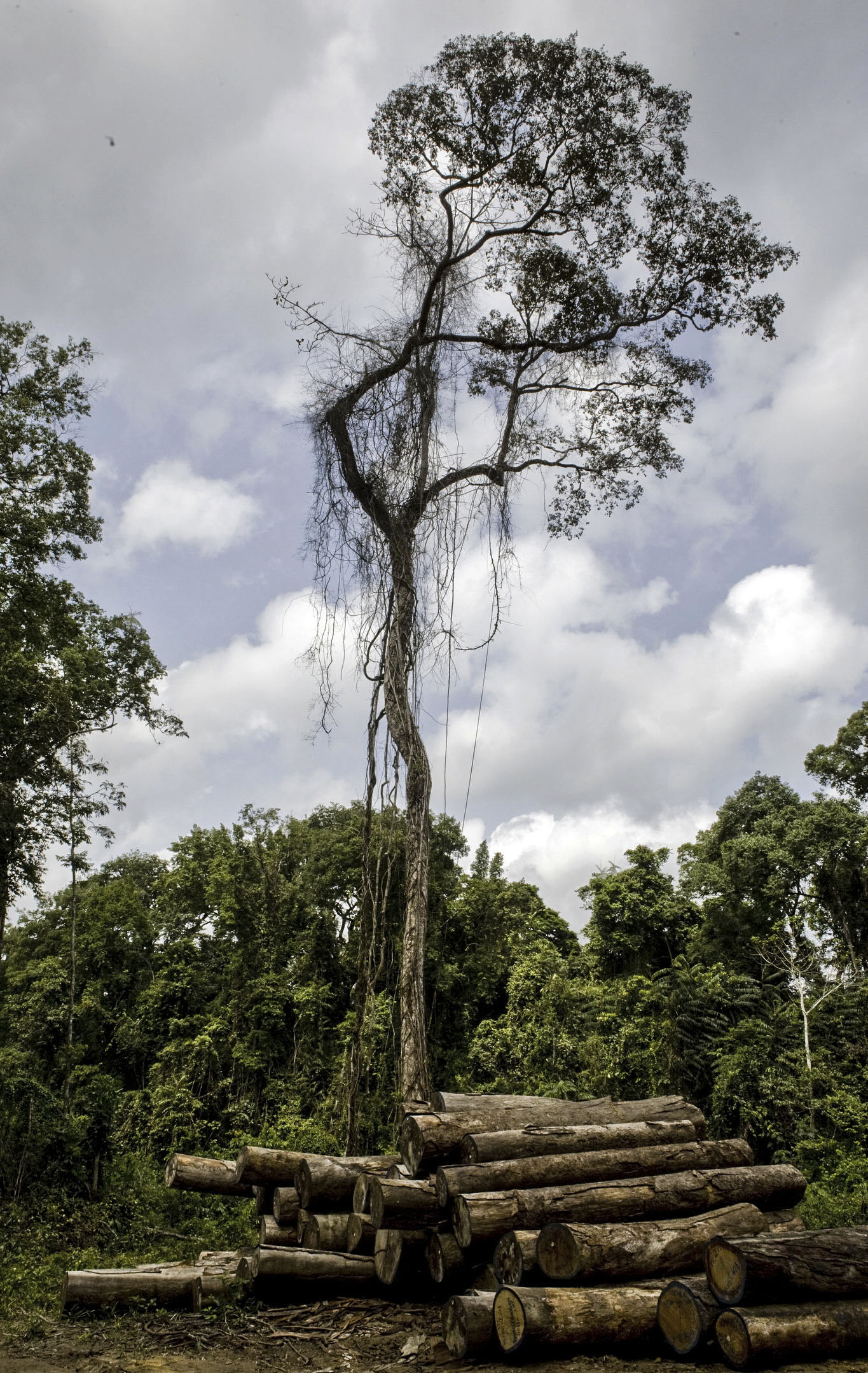 A corner of the forest — about 208 000 hectares — was saved from becoming a palm oil plantation, thanks to the efforts of Brownell and his team. (Leise Jones Photography and Glenna Gordon/AFP)

But the victory came at great personal cost. After facing constant harassment and threats of violence, Brownell fled Liberia several years ago, fearing for his life. He took his family with him. He hopes that the attention generated by the Goldman prize will persuade the government, now led by ex-football star George Weah, to give him assurances of his safety, so that they can all go home.

He is more optimistic about the future of the planet, despite grim news about its condition: in the past two weeks alone, new studies have shown that deforestation in Africa is increasing at an unprecedented rate; and that up to a million species are at risk of extinction through the actions of humans, with catastrophic consequences for Earth’s life-support systems.

But Brownell is not sure that this future will include humans. “I’m not too sure the battle for the forests is being lost. I believe in life, in Mother Nature. And if you believe that the forest is going to be a victim, then you miss the point.

“Mother Earth knows how to fight back. And if those of us who are human beings don’t fight [on her behalf], she is going to raise other means to protect herself. And we are seeing that. We are paying a high price already. Just in your region, in Mozambique, look what’s happening there [Mozambique was struck by two major cyclones in two months, killing more than 1000 people and displacing hundreds of thousands more].

“It is time that we appreciate the services the forests provide to us. I’m not sure when you walk out of your home, you appreciate the value they give to you. When you go to bed and are asleep, what is keeping you alive when you breathe in and out? It’s the oxygen from these trees. They are actually giving us life. We have to protect them. The next time you step out of your house, please give a tree a tender hug and remember this.”

Congo Basin: Earth’s African ‘lung’ is it most resilient