The radical afterlives of Frantz Fanon

When Frantz Fanon was in late stages of leukemia at age 36, he was flown to a hospital in Bethesda, Maryland in the United States, for surgery. His five-year-old son, Olivier, walked in on an ongoing blood transfusion and, seeing the bags of blood, feared that his father had been cut into pieces. Little Olivier was later found waving an Algerian flag on the street since the brutal and ongoing Franco-Algerian war in which both his parents were deeply engaged was his only understanding of violence and blood in the world.

I was reminded of this heartbreaking story, included in David Macey’s Fanon biography, during the screening of Hassane Mezine’s film Fanon: Hier, Aujourd’hui (Fanon: Yesterday, Today), which features Olivier Fanon, now an adult, reading excerpts from his father’s work. Interviews with him add a particularly melancholic note to the beautifully composed summary of Fanon’s life comprising the “yesterday” portion of the film’s first half. “I was molded into the pro-independence scene of the Algerian war,” Olivier explains as he recounts living underground because of the constant threat to his father’s life.

Mezine encases Fanon’s story — a life lived defiantly for a short, energetic and prolific burst of time — between his beginnings as an 18-year old World War II soldier fighting against Nazism to his “ultimate fight against colonialism.” Here, the focus is on Fanon’s Algeria years, starting with his posting to Blida, where he was appointed chief doctor at the psychiatric hospital. Coming on the heels of the recently published Alienation and Freedom: Frantz Fanon, which has recuperated and translated almost two-thirds of Fanon’s work on psychiatry, the film also attempts to place Fanon’s psychiatric work at the center of his anti-colonial thought. It was in Blida where he was able to try out new, progressive methods in a place and moment where colonial, racist treatment of North African patients had become the norm.

Fanon was an intern of Dr Francois Tosquelles, who had asked the paradigm-shifting question, “How can you treat patients if the institution itself is sick?” and had gone on to invent institutional psychotherapy. Pushing these ideas further, Fanon completely reorganised activities and treatments at the hospital, adding art therapy, music, storytelling sessions, and even had a football pitch built on site. The film alternates between old and new images of the hospital in Blida, moving from the menacing photos of a rack of chains, handcuffs and belts to contemporary ones of people relaxing by the hospital cafe with a portrait of Fanon hanging prominently on the wall, evidence of the long-lasting structural changes he made there.

The films takes the viewer through Fanon’s time as a revolutionary in the Algerian struggle through an intimate and personal lens — stories of friends who gathered over meals to have long, agitated discussions about the war; Fanon playing guitar and singing at a holiday party; Fanon pacing through his bare and unfurnished room, in which he dictated entire books to his then assistant, Marie-Jean Manuellan; Fanon pushing toddler Olivier on his tricycle. All these memory fragments allow the audience to access a sociable, congenial and vibrantly alive Fanon — someone always at one with a community, and who had boundless energy and ideas for fighting colonial injustice everywhere. 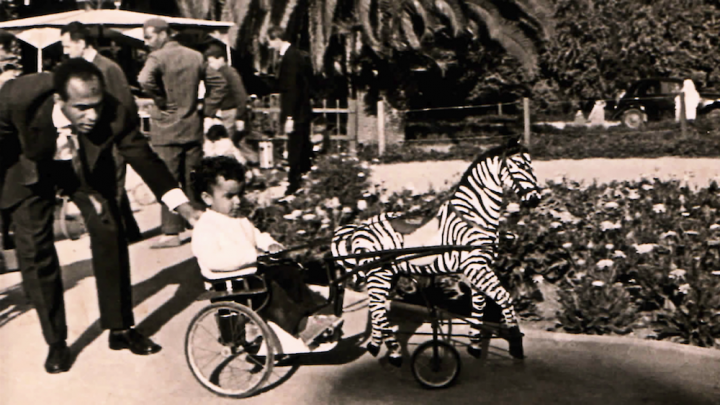 Still from the documentary film.

A groundbreaking feature of this documentary is a simple one: a short portrait of Fanon’s partner in life and love, Josie. Epitomising revolutionary love, “Algeria served as a catalyst to bring Fanon and my mother closer,” Oliver explains. “She was there on the battlefield, on the borders,” he adds, and indeed Fanon, Josie and Algeria were “indissociable” from each other.

While Josie Fanon has been left out of history books, this short homage does the necessary work of prodding and reminding Fanon experts to reckon with the extent to which revolution is continually framed as masculine, with women simply treated as temporary accessories to the larger project. Josie was a respected and beloved figure who continued working as a journalist in Algeria and was a strong ally of the anti-apartheid movement in South Africa, essentially remaining fearlessly engaged in politics until her death in 1989.

While touching on many new iterations in Fanon’s biography, it is the “today” section that forms the crux of the documentary. It contains the longer and meatier thesis: the idea that Fanon’s work has been transformative and influential, and that it undoubtedly possesses radical afterlives.

What, after all, is the relevance of Fanon today? Unlike Che Guevara, Fanon has not become a mainstream icon. There are no t-shirts, badges or tote bags upon which he appears, and this is simply because Fanon’s ideas are not easy consumption, nor do they lend themselves to short, pithy slogans. Yet as a global right wing movement now takes root, so too does a ferocious, belligerent and resistant decolonial ideology.

The documentary finds that Fanon has a lot to offer to today’s youth, who are disenfranchised by neoliberal economic policies, fed up of pernicious racism and heavily radicalised due to the ample online availability of a roster of contemporary injustice, inequity and corruption in the world. “Misery is the unique destiny promised to hundreds of millions of humans,” narrator Marie Tsakala stoically declares.

The film’s journey begins in Martinique, Fanon’s birthplace (where the documentary has been screened to enthusiastic audiences in massively packed auditoriums). Mezine was surprised at how little Fanon’s work is known in Martinique. Yet this eager reception is perhaps evidence that there is a desire to look underneath the mistaken stereotype of Fanon as an “apostle of violence,” and a real hunger to return to his ideas that might offer answers for a troubled present.

In Portugal, rapper and activist Flàvio Almada ‘LBC Soldjah‘ speaks of having been transformed by Black Skin, White Masks. A leader in ‘Plataforma Gueto,’ a black social movement that devises methods for popular education and community building, Almada claims that institutional racism and police violence towards the black population is entrenched in Portugal. Thus, the Fanonian notion that “we revolt because we can’t breathe” resonates urgently. Fanon’s ideas are important because they illuminate that it is not the fault of the marginalised people, and it is not their destiny, explains Almada, but that racism and violence is ideologically organised, and can actually be decolonised, eradicated and overcome.

Travelling to France, South Africa and Niger, the documentary attempts to track the relevance of Fanon for a younger generation intensely cognisant of the fact that imperialism continues unabated in a host of creative and deceptive mutations. “We are not the ‘wretched of the earth’ that Fanon talked about,” French-Algerian activist Houria Bouteldja explains. “We are the post-colonial subjects of Europe; we are the South in the North.” 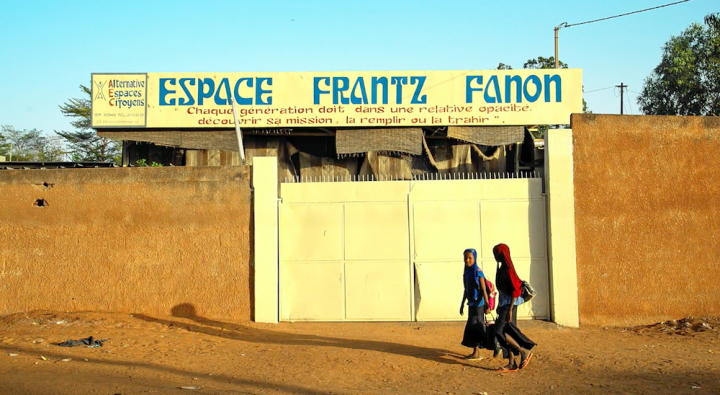 Still from the documentary film.

Hassane Mezine himself is very much a product of these ideas, and chose to make this documentary because of his “Algerian identity,” which became conflicted when growing up France. He explains that one is “confronted with French republican myths about justice and equality that do not really apply when you are born out of French colonial history.” For Bouteldja, as for Mezine, Fanon clarifies the processes of an internal colonialism, and his writing offers strategies to decolonise from these suffocating structures.

Exceptionally sharp observations come from the young activist Ibrahima Diori in Niamey, Niger, who says that Fanonian ideas become particularly relevant as his country plays a pivotal role in exacerbating the so-called “migration crisis.” Divisive colonial laws between black Africa, white Africa and North Africa prevent an internal freedom of movement. As heads of states in these North African nations become brokers for European agendas, borders extend and proliferate throughout Africa, becoming “a game of encirclement put in place by European anti-migratory policies.” Despite statistics that prove, again and again, that the majority of migrants do not desire to enter Europe, but rather to travel freely within Africa, this discourse is promoted in the media as a justification of draconian and repressive border policies.

Diori pleads for a simplification of relations between human beings, and Fanon offers him a bridge for these ideals of solidarity and unity. Journalist and activist Salima Ghezali has similar reflections in Algiers, Algeria, and speaks of an internal racist discourse that has been furthered by the group Fanon referred to as the corrupt “national bourgeoisie” in light of refugees and migrants arriving from within Africa.

As the Fanon journey continues, it seems clear that women are at the forefront of these contemporary mass movements against racism, corporate greed and structural colonialism. This is further illustrated as Mezine ends with a beautiful section in Palestine with Samah Jabr, who is one of only 22 practicing psychiatrists and the sole woman in this profession in the West Bank. Deeply influenced by Fanon’s writings, Jabr explains that “trauma described in western manuals does not look similar to the trauma we have in Palestine.” She compares an oppressed group to a rape survivor who blames herself for the rape and wonders if she deserved it in the first place. An oppressed group like the Palestinians have to work through this immense inferiority complex, and activism inspired by Fanon’s theories can be therapeutic, Jabr adds. In a powerful symbolic move, Mezine projects Fanon’s words onto the radiant face of Ahed Tamimi, a teenage girl who was jailed for her confrontation with Israeli soldiers, inciting global outrage and protests.

Indeed, Mezine ushers Fanon into a twenty-first century generation that has, perhaps, never known colonialism proper, but has inherited all of its enduring brutalities. Portugal’s Almada insists that “activists, rappers and academics must read Fanon, but not to transform Fanon into something fashionable. Fanon is for liberation.” Elsewhere, Cornel West’s hypnotising words on camera stay with us: “Much of the world remains pre-Fanonian. But we will catch up with Frantz Fanon because many of us have decided that we want to be faithful unto death to his truth-telling, to his witness-bearing…”

As the melancholic strains of Yazid Fentazi’s oud, which have accompanied us throughout the documentary, now give way to Tunisian musician Neyssatou’s fiercely blasted cover of Bob Marley’s “War,” there is a sense of jubilance. The mission might not yet be accomplished, but the stage has been set and the work of liberatory decolonisation is being attempted in earnest across our planet.

This article was originally published on africasacountry.

Bhakti Shringarpure
Bhakti Shringarpure is on the Faculty of the University of Connecticut, Editor in Chief of Warscapes and author of 'Cold War Assemblages: Decolonisation to Digital.'
Facebook
Twitter
WhatsApp
Linkedin