Fight the fakes: how to beat the $200bn medicine counterfeiters

By the time the teenage boy was standing in front of Bernice Bornmai, feverish and delirious, it was already too late.

It wasn’t just the malaria that was killing the 17-year-old, it was the time he’d wasted taking fake medicine. The antimalarials did nothing to stop the disease marching through the young Ghanaian’s body: his organs were already shutting down.

“He died waiting to be taken to a larger teaching hospital for dialysis,” Dr Bornmai told the Guardian, from the small hospital in Accra where she works as a senior medical officer. “It was one of my saddest cases, but I have lost other patients who would have survived because of fake medicines too.”

It’s not just ineffective malaria medication that can prove fatal. Bornmai’s patients have sometimes taken counterfeit antibiotics that not only don’t fight the illness but also increase bacterial resistance to effective medicines.

“Sometimes I just throw up my hands when I see the results showing which antibiotics have a chance of working – often they will be not readily available or too expensive,” the doctor says. “It makes my work frustrating, and it means patients have to stay here longer while I investigate.”

When it comes to trying to stop fake medicines getting into the hands of sick patients, experts describe a difficult task where they are constantly trying to stay one step ahead of counterfeiters.

Law enforcement and legislation is needed, strong pharmaceutical regulation has to be in place and well-trained healthcare professionals are essential, explains Cynthia Genolet, an Africa policy expert at the International Federation of Pharmaceutical Manufacturers. “You can’t focus on one specific dimension to be successful in this fight – it has to be a holistic effort,” she says.

Genolet is a member of Fight the Fakes, a campaign group launched in 2010 to raise awareness of the problem among pharmacists and industry. One tool campaigners hope will have an impact is the harnessing of emerging technologies such as blockchain and artificial intelligence, which have the potential to help in dealing with the complexity of the task at hand.

A handful of new startups are focusing on tracing medications on blockchain-type technologies, as well as arming consumers with instant information about what they’ve bought.

The Nigerian start-up RxAll, for instance, has created a handheld scanner that can assess the compound of a drug in real time. The device connects to a cloud-based database of information of what the drugs should contain, which then feeds back that information.

“The information collected is a spectral signature of the drug, and once checked, the database sends back information to an app on your phone,” explains Adebayo Alonge, one of the co-founders. The vast information database is updated using an artificial intelligence algorithm. 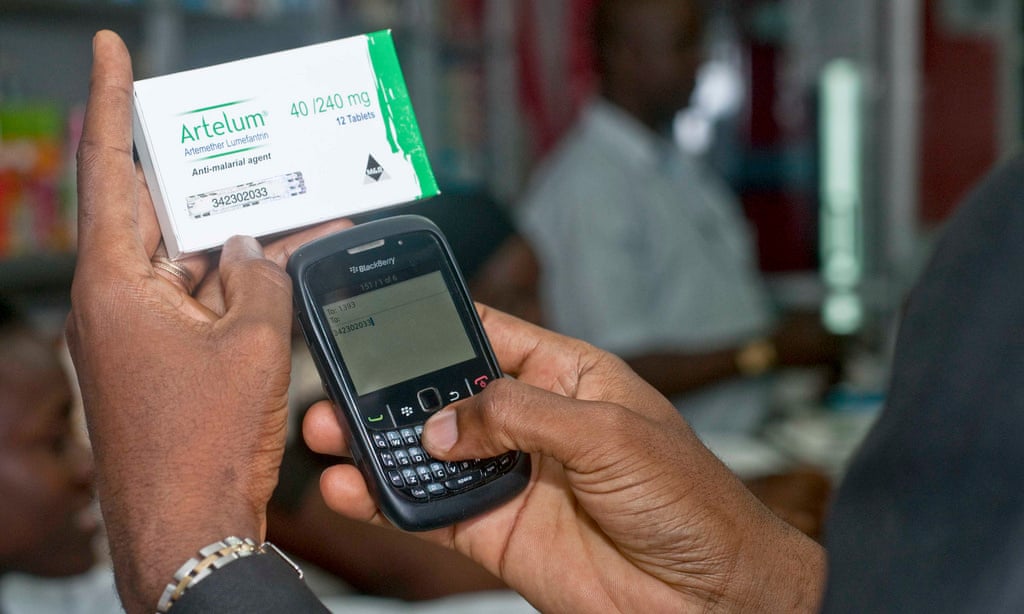 “The app also shows you the other parts of your city that the drug has been tested in, meaning you can see where bad patches and bad suppliers are,” says Alonge.

Alonge and his colleagues launched Rxall last October and have been rolling it out in countries including Ghana, Cambodia and Kenya. It has been in use commercially in Myanmar and has been sold to a large Nigerian teaching hospital and to Nigeria’s National Agency for Food & Drug Administration and Control, whose officials have started training to use it.

It’s a personal cause for Alonge, who nearly died at the age of 15 after taking what turned out to be fake Ventolin for his asthma. The toxic tablets put him in a coma for 21 days, and it took six months for him to completely recover. That experience motivated him to train as a pharmacist himself before starting RxAll.

Similarly, Raja Sharif, the chief executive of the UK-based data company FarmaTrust was also motivated by personal experience. He began researching the problem after he found out a relative had taken fake medicines.

FarmaTrust offers a way to trace data about medicine moving through the supply chain on blockchain, a technology originally created for the purpose of buying and selling bitcoin without going through a server belonging to a bank or government that could be hacked.

Sharif explains: “The issue with fake medicines is that they usually enter the middle of the supply chain, not at the top at the point of manufacturing, and the useful thing about blockchain is that it creates an incorruptible record; once you’ve made a record, you can’t make it again or alter it.”

Another benefit of this technology, he says, is that information can be shared between pharmaceutical companies about what is going on in their supply chains on a need to know basis. As they are siloed and competing with each other, vital information that could root out fakes might not be shared.

Oksana Pyzik, a senior lecturer at UCL’s school of pharmacy and Fight the Fakes campaigner, says blockchain looks as though it can become an effective tool. “I think based on the fact the FDA is already piloting blockchain in the pharma supply chain in the US suggests it’s a way forward to get the highest quality track and trace, and the cost is not as prohibitive as it was once,” says Pyzik, who organised a panel on the topic of technology and fake medicines at the WHO’s most recent annual health assembly in May.

“Technology alone is not enough, however, it’s a very effective tool. But we also still need to talk about human behaviour and corruption,” Pyzik adds. 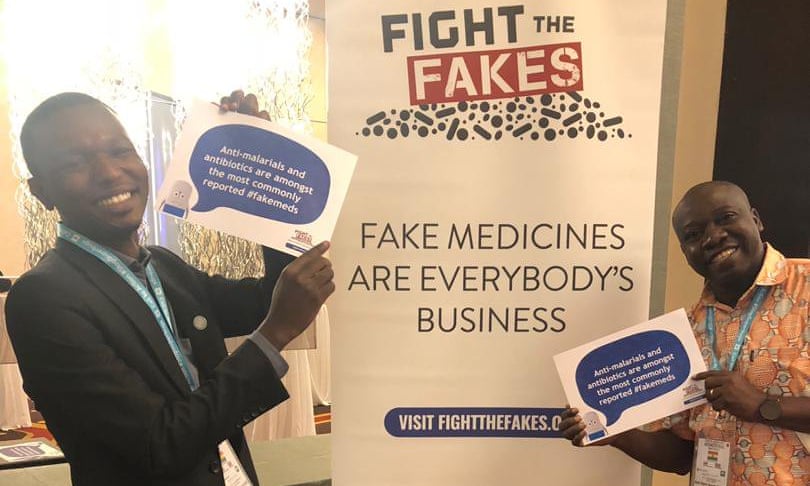 Fight the Fakes activists at a Wellcome Trust-sponsored launch in Accra, Ghana. (Fight The Fakes)

A much simpler tech solution pioneered by Ghanaian company mPedigree offers a different approach. The company founders began by placing serial numbers under scratchcard surfaces on medicine bottles at the point of manufacture, and consumers can then check the text to see if it matches their database before taking it.

“The company has grown because the counterfeiters grew,” says Selorm Branttie, who co-founded the company with social entrepreneur Bright Simmons. “We’ve studied where breaches in the supply chain happen, and we counteract it.” The company now has offices in Nigeria, Ghana, Kenya and India, and has branched out into tackling counterfeiting in the food supply chain too.

“Happily, from when we began to now, the prevalence of counterfeiting has dropped from the estimated 30% of the Nigerian pharmaceutical sector to less than 10% today,” Branttie says.

“We are now looking into ways we can use blockchain too – blockchain helps to demonstrate that we are ourselves trustworthy because its a permanent public ledger and therefore can show the data we have collected,” says Branttie.

The need for any solution being developed to have a global reach is clear. In 2011, Interpol seized 2.4-million fake and illicit pills, and that number jumped to 20.7-million seized in 2015. A large quantity is produced in China, but India, Pakistan, Paraguay and the UK are also among the top sources for fakes.

An estimated 116 000 people die from malaria from ineffective anti-malarial drugs in sub-Saharan Africa, according to the London School of Hygiene and Tropical Medicine. The WHO estimates that between 72 000 and 169 000 children may be dying each year from pneumonia due to “substandard and falsified antibiotics”.

Counterfeited medicine, thought to be the most lucrative of illegally copied goods trades, ends up all over the world. But developing countries, where spending on medicine means being out of pocket for the majority of people, are the most vulnerable to counterfeits. Most of the cases (42%) reported by the WHO between 2013 and 2017 were found in sub-Saharan Africa.

In 2018 the EU rolled out its track and trace directive to combat falsified medicines in Europe. The same year, the African Union voted unanimously for the adoption of an African medicines agency, something that has been welcomed as a move that would help strengthen regulation across the continent.

Meanwhile, organisations such as the Safe Medicines Foundation in Nigeria, which launched earlier this year, have sprung up. The foundation hopes its medical professionals can help pharmacists recognise the signs of fake logos and store medicines correctly.

Slowly, the fightback is taking shape, but it is still a mammoth task. Dr Bornmai says that she has noticed her patients have asked her more questions about fake medicines recently. “People are getting to know about fake medicines; they ask me if I’ve heard of a certain drug, or whether its safe to take,” she says.

She says that technology can help speed up the process of checking something – saving days or weeks that could be lost to laboratory testing. But consumers ultimately still need quality medicine to reach their local markets. “An individual could scan a medicine and find that it is fake, then go to the next shop, scan again, and find it’s fake again,” she says.

But most importantly, it’s informing and educating the public that can save lives, she says. “Giving individuals more power, through education and the right information to choose the medication that isn’t harmful, is the most important thing that I want to see. It is a universal right to choose medicine that won’t harm you.”

This is an edited version of a feature originally published as part of The Guardian’s Global Development project.