It’s halftime at the Emirates Airline Park in Johannesburg. The Lions home team are trailing 33-5 against the Rebels, one of Australia’s top-of-the-log teams that is looking ever so impressive to the local crowd. In the second half, the Lions claw back with numerous penalties conceded by the visitors. In the 47th minute, Rebels centre Bill Meakes gets shown a yellow card by South African referee Egon Seconds. Four minutes later, the Lions score their second and third tries before Meakes makes his way back on to the field. The game ends with a 36-33 win for the home team.

Many local fans lauded the epic comeback by the Jo’burg team in the fiercely contested Vodacom Super Rugby competition, but others took to social media to air their disappointment in former Western Province and Griquas winger Seconds’s refereeing.

“This is the first time I can ever remember seeing such biased and unprofessional refereeing in a Vodacom Super Rugby match,” commented YouTube user John Doe. “I even had money on the Lions to win the match and even though that happened, I am still disgusted at the quality of the refereeing in that match.”

“That’s an amazing stat. I’ve never seen a stat like that in my life,” Rebels coach David Wessels said during the post-match presser.

Penalties in rugby, as in most sports, are as much about the ever-evolving laws of the game as they are about the subjective nature in which they are interpreted by the players, officials and fans alike.

Super Rugby data from the past three seasons, obtained by the M&G Data Desk, found the average margin in penalties conceded between competing teams this season was 3.68.

The second biggest margin in penalties conceded in the tournament was in 2018 between the Rebels and the Sunwolves from Japan. It was Seconds who blew the whistle, penalising the Rebels 16 times. The Sunwolves were only penalised three times but the Rebels ended with a convincing win of 37-17. 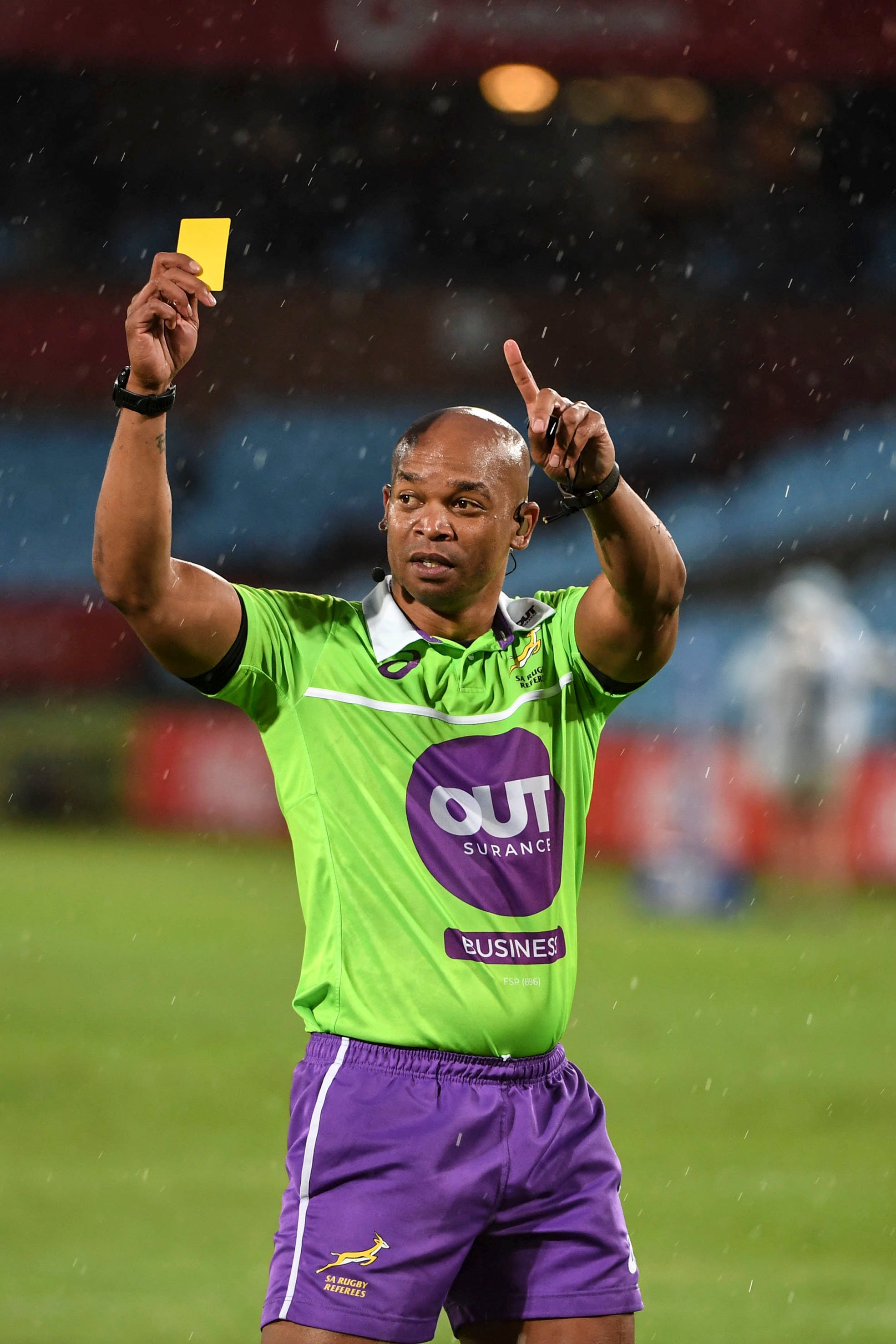 The preceding season, the Rebels found themselves on the wrong side of the penalty history books again. In 2017 the Aussie team conceded a season record of 19 penalties in Durban against the Sharks, who were penalised six times by local referee Marius van der Westhuizen. The game ended with nine points a piece and 14 men on either side.

This season, the Waratahs from Sydney faced similar circumstances against the Lions in Johannesburg when Seconds penalised the team 11 times and the home team twice. The Lions won the game 29-28.

Accusations of bias are part of an age-old debate in sports.

In 2010, two Australian researchers who specialised in behavioural economics, Lionel Page and Katie Page, published a study titled Evidence of Referees’ National Favouritism, released by the National Centre for Econometric Research at the Queensland University of Technology. They focused on data collected from the Super Rugby tournament (formerly known as the Super 14) and the European Super League, which included teams from France and England. 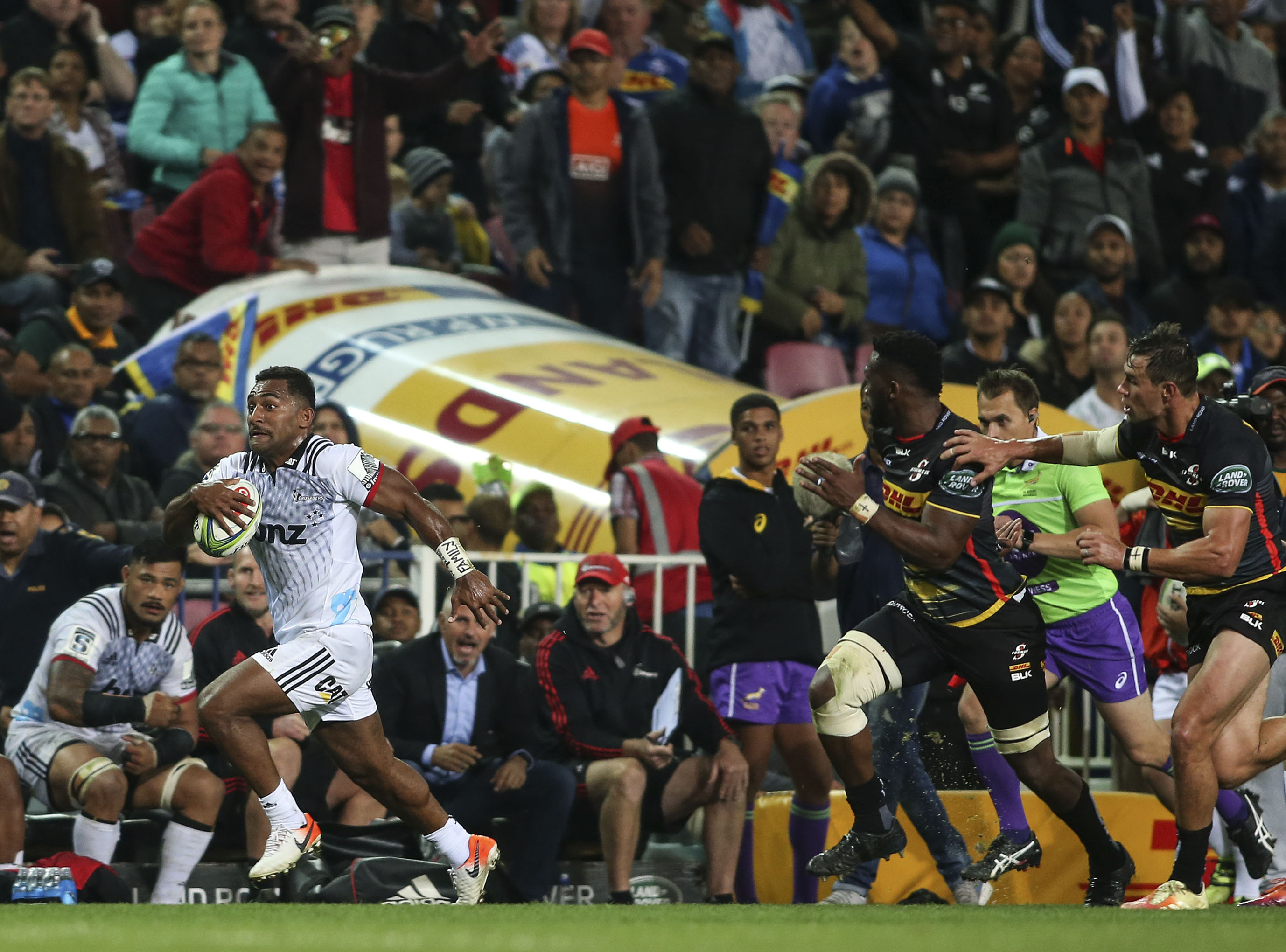 “Every country thinks that players from the other country have some dodgy practices,” Page told the Mail & Guardian. “One possibility is that it’s pure psychological preference — it doesn’t need to be fully conscious. It could be subconscious.”

But the debates are most fierce where the margins are the smallest. In situations with close score lines (zero to four points’ difference), the study found the English referees in Europe’s Super League gave 58% of the decision in favour of the English team versus only 43% for the French referee.

Although the introduction of television match officials (TMOs) might have curbed biased decision-making, the game which arguably drew most criticism this season, however, revolved around TMO judgments.

A near-packed Newlands stadium in May played host to a fast-paced and aggressive contest between the reigning champions, the Crusaders from New Zealand, and the Stormers on their home ground. The Cape Town team put on a commendable performance but was trailing 16-19 when, in the 75th minute, Crusaders wing Sevu Reece scored a try. Kiwi fans turned sour when South African TMO Marius Jonker intervened and called a forward pass in the run-up to the try. The match ended in a 19-19 draw. New Zealand fans cried foul play by the TMO Jonker and assistant referee Fhatuwani “Rasta” Rasivhenge, who were both replaced for the following match.

“There’s been some contentious decisions made by TMOs that’s caused tension,” said Andy Marinos, chief executive of Sanzaar, the South African partner in Super Rugby and the Rugby Championship. 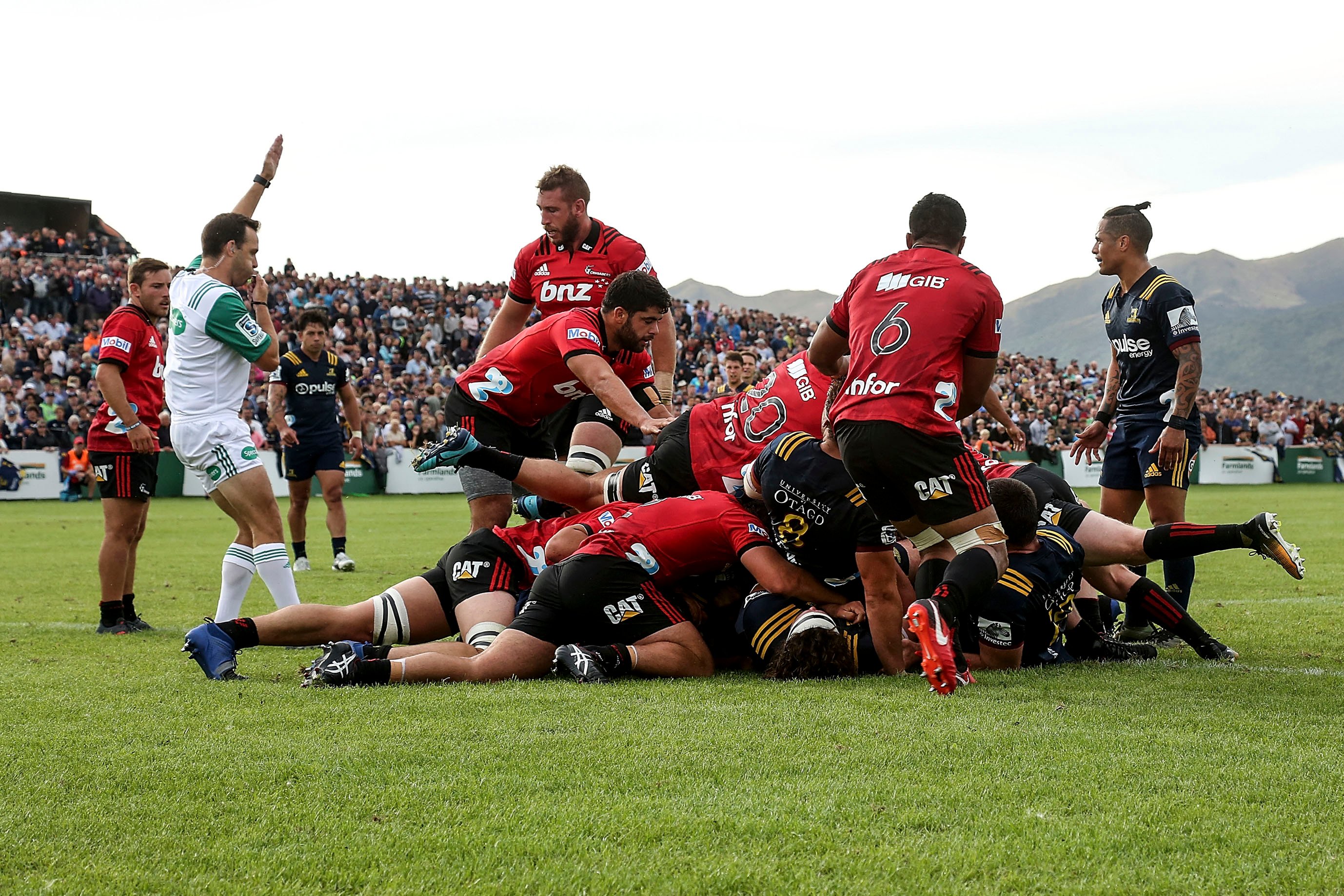 Even television match officials, checking calls on the field (above right), have not escaped criticism.  (Steve Haag/Gallo Images and Dianne Manson/Getty Images)

“But, at the same time, you have to realise that there are humans at the end of a whistle or television screen that are making judgment calls at a particular point in time — there will be errors along the way.”

Marinos added that, where there have been errors this season, they have been addressed and that overall performances by match officials have been positive.

The competition has included a new format this season where referees are paired together more consistently. This year, experienced referees are generally paired with younger or developing referees. “That’s really had some tangible results and has produced some good efforts,” said Marinos. The M&G Data Desk found that South African referees have, on average, penalised the Crusaders the least this season. Despite this, the Christchurch team have conceded the most penalties this season. 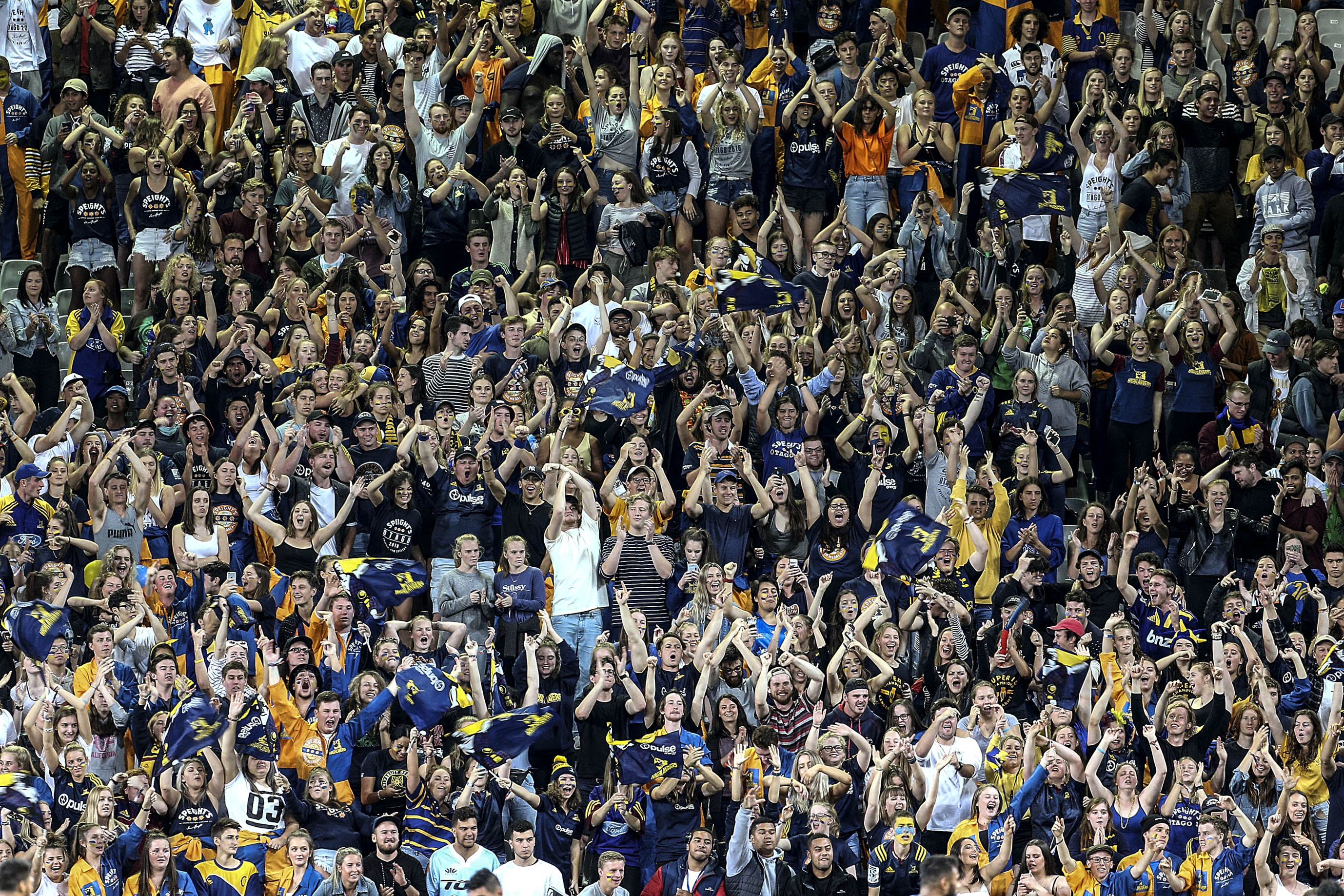 Up in arms:Supporters are often the most vocal critics of referees, but research has found that every country thinks that players (and referees) from other countries have some dodgy practices. (Dianne Manson/Getty Images)

“If you go through every referee decision, they might get a call wrong. But as many [as] they get wrong they get right. But I think it just shows the competitive nature of the game,” Marinos added.

Pundits have called for the introduction of neutral refereeing, including former Springbok coach Jake White, who asked in an All Out Rugby column in 2017: “In a sport where coaches get hired and fired on results, and television rights are in the millions of dollars, how do we not have a neutral referee in these games?”

As with Super Rugby and the Super League, the Guinness Pro14 in Europe also does not have a neutral referee policy.

In other sporting competitions, such as the football Premier League, it’s easier to find a neutral referee because there are so many nationalities involved.

“If you look at a competition like Fifa [World Cup], you’ll find that referees are also appointed by merit. But the main difference is not so much merit in both competitions but rather the pool of countries is just way smaller in rugby,” said Lionel Page.

When asked whether the competition would consider a neutral refereeing policy to avoid referee bias, or at least claims thereof, Marinos said they prefer a merit-based system and that talent shortages makes it difficult to recruit world-class referees.

“I think that in professional sport you’ve got to make sure you have the best person available in the middle,” Marinos said, adding that the competition does not have the depth of referee numbers at the league level that are equally spread across all countries.

Jaco Peyper will be the only South African referee out of 12 at Rugby World Cup 2019 in Japan this year. 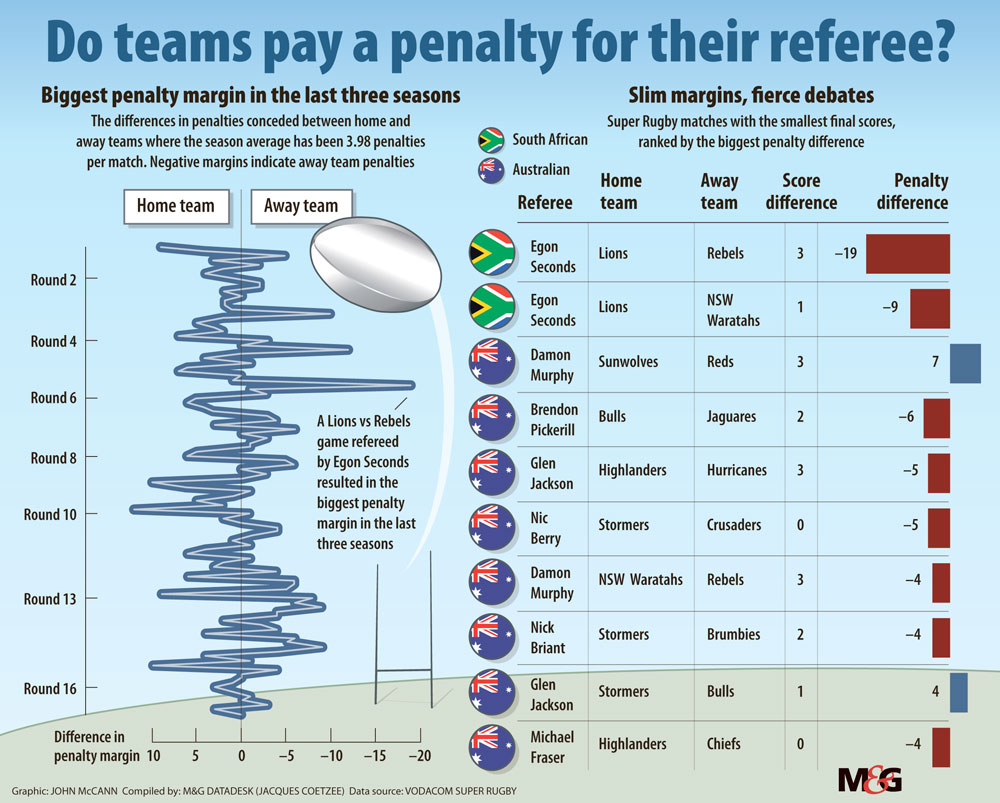 Jacques Coetzee is the Adamela Data Fellow at the M&G, a position funded by the Indigo Trust