Elhaam Davids lives with her 10-year-old son, Lyle, in Rondom-Tik, an informal settlement adjacent to Lavender Hill. Loosely translated as “Around Tik” the settlement’s name is a telling reflection of the prevalence of drugs — and gangsterism — in the Cape Flats.

The Western Cape has the highest number of gang-related killings nationally and Lavender Hill is a particularly notorious hotspot. This month alone, at least 14 people were killed in gang-related violence in the area.

And children, Davids knows all too well, are not immune.

“I know a lady, a friend of mine. Her son, about a year ago, they shot him dead. He was 10 years old. He was involved in gangs. You see, the kids as young as them get caught up in gangsterism, because they offer them money. And all kinds of stuff. Her son was caught up in that and, unfortunately, he lost his life. She is still very heartsore. She can’t get over it,” says the unemployed 46-year-old.

“The shootings is like second life here. When there is a shooting, it’s not something new. It’s a very normal thing here. It’s very sad. And bad, you know, for our children to grow up like that.”

READ MORE: Queers and the allure of gangs

Not wanting Lyle to become another statistic, Davids agreed that he could start drumming lessons. 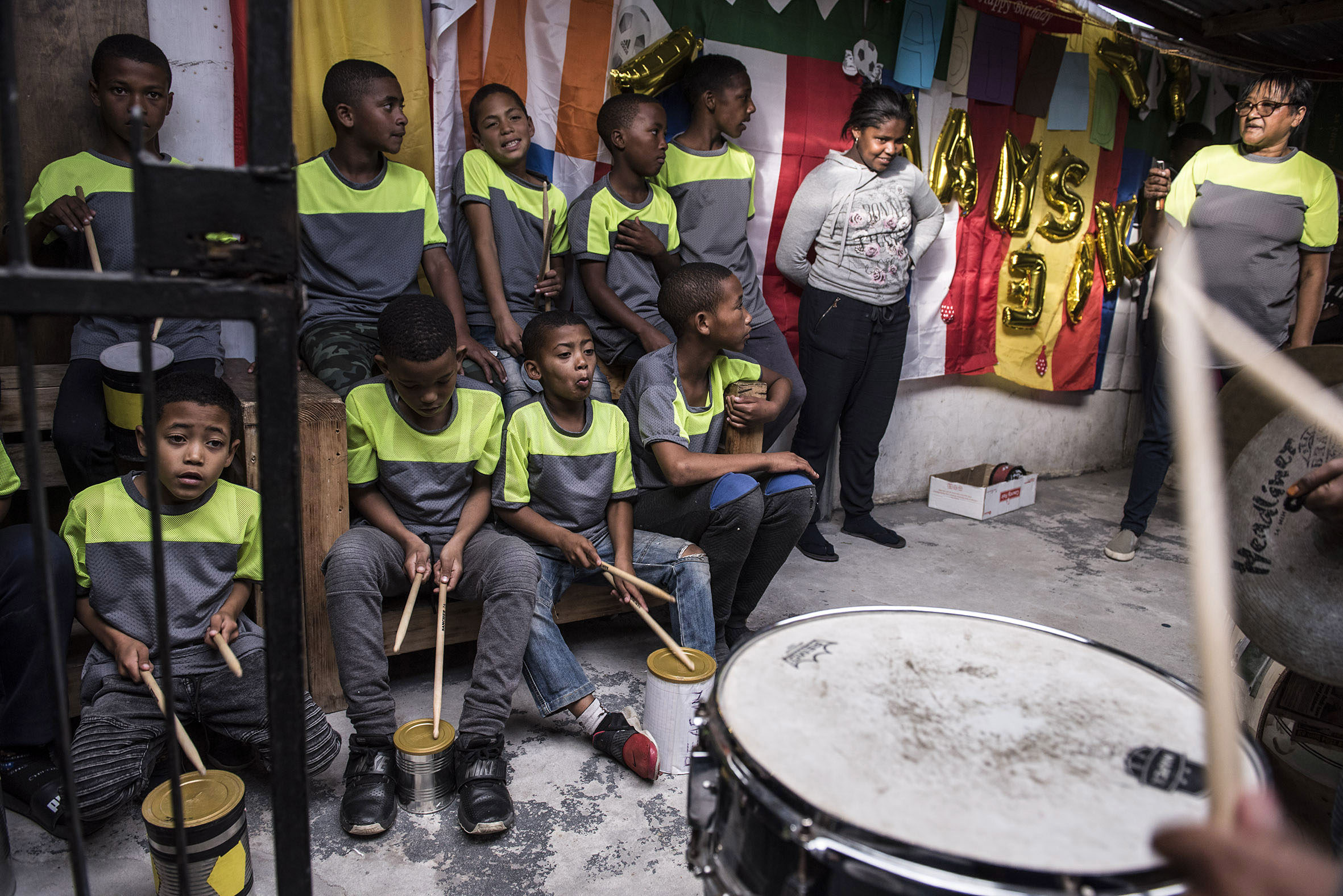 “I’m very impressed with him,” she says of Lyle’s progress so far. “And with the other children also. Because as you know … this is keeping them off the streets. Keeping them away from gangsters.”

The person spearheading an initiative to keep children off the streets and away from gangsterism is an unlikely figure. Born Ralph Bouwers, he is now more commonly known as Zsazsa. 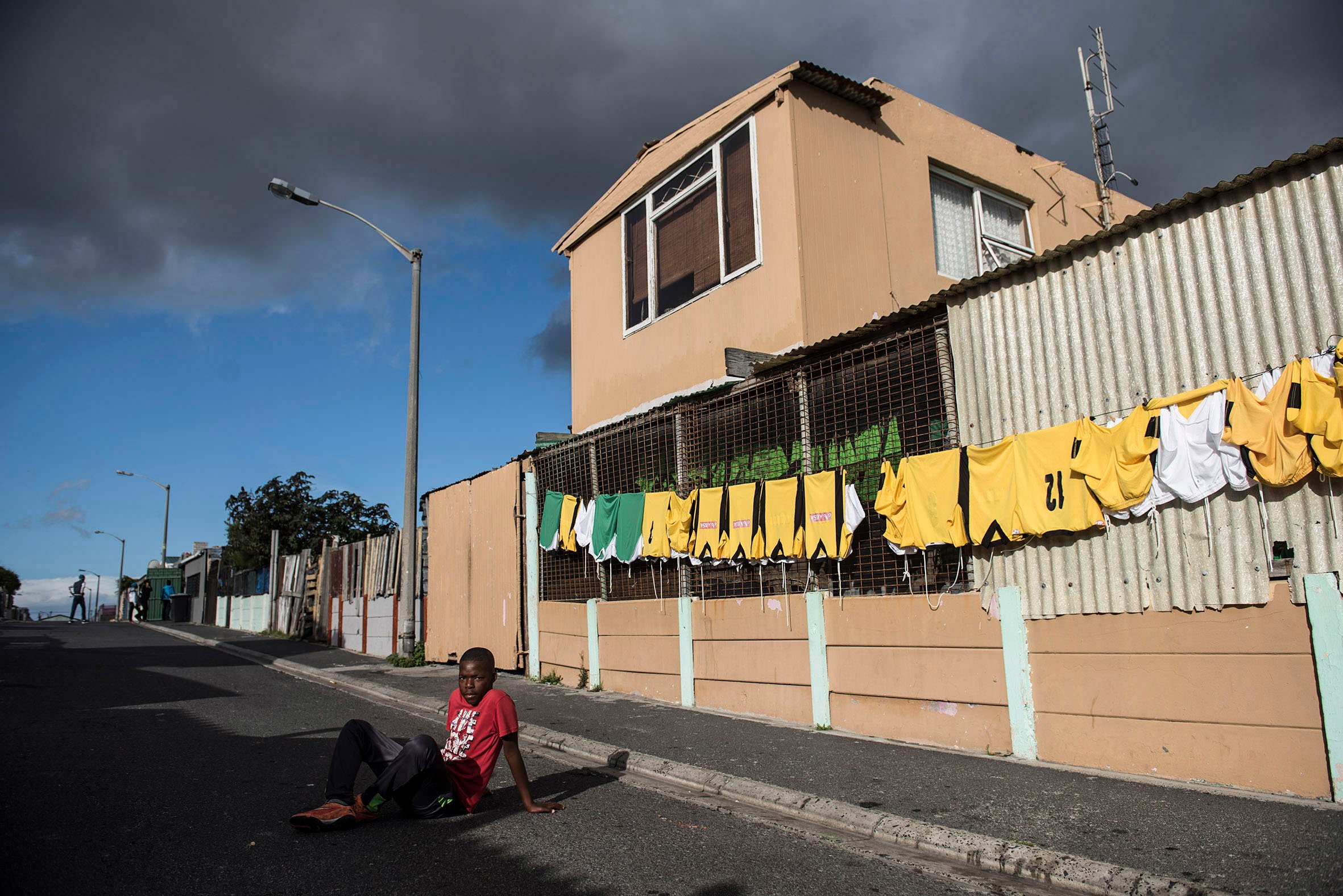 “It’s from my drag queen days,” he smiles. “I used to be the beauty queen of Lavender Hill. I always won the competitions. Almost every weekend, my mother’s bathroom used to be full of bouquets.”

Bouwers left the area years ago to practise as an optician in the United Kingdom. When he returned 18 months ago, he established Guardians of the National Treasure. 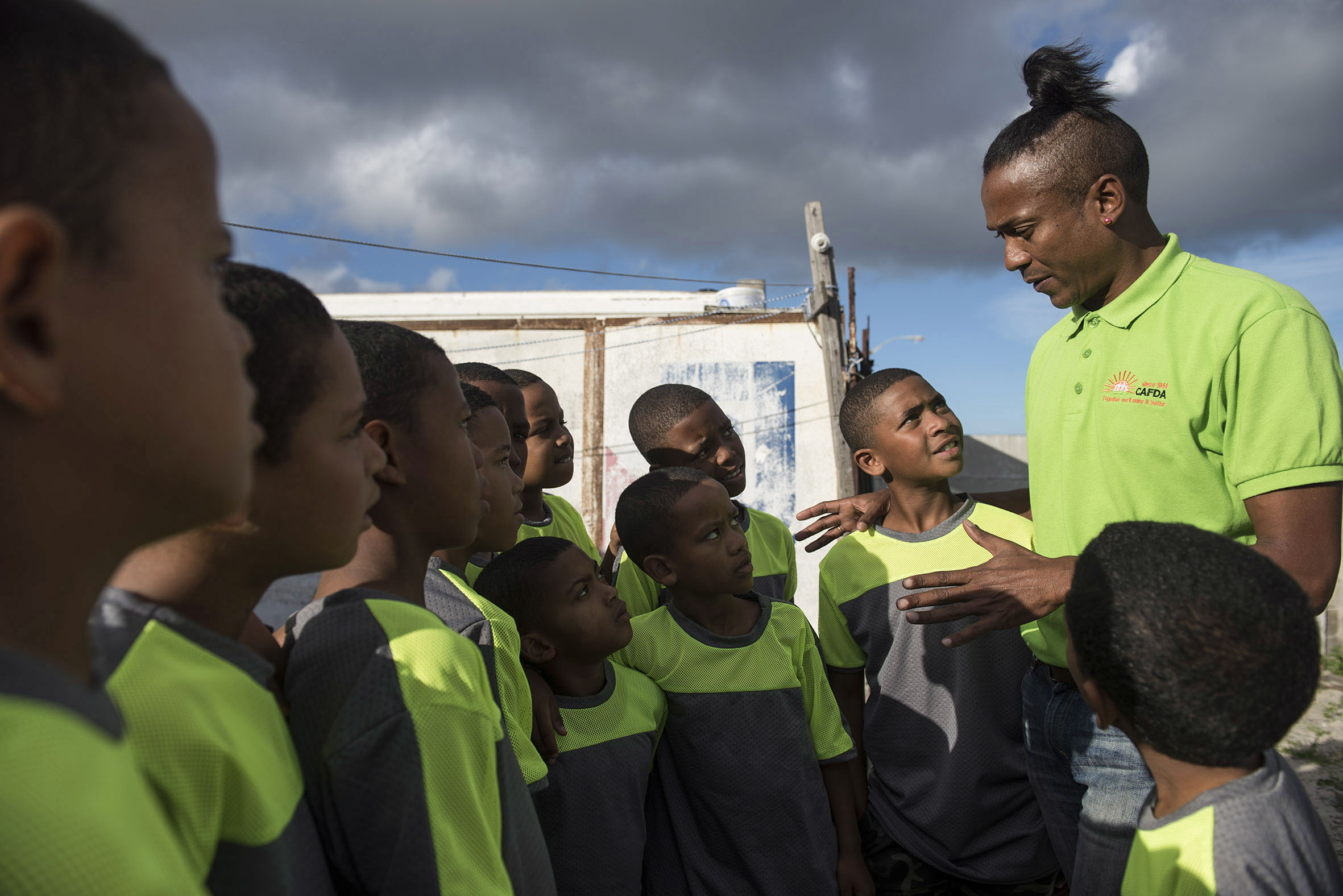 Team talk: Zsazsa, who started Guardians of the National Treasure, chats to soccer players on The Battlefield he wants to turn into sports facilities. (David Harrison)

“I was born in Lavender Hill. I grew up here. I know what life was like then with opportunities. I played sports every day. I did chess and netball and tennis. But when I came back from England, there was nothing in Lavender Hill.”

Swapping a life of strutting in heels and tight-fitting sequinned dresses for traipsing in takkies and jeans on sports fields, Bouwers established the nonprofit organisation with the express aim of keeping children such as Lyle on the straight and narrow.

“It’s really just about unpacking opportunities for youth in our communities to keep them away from the substance abuse and gang affiliation,” he says.

READ MORE: Anti-gang protesters accuse police of targeting them instead of gangsters

The organisation now has hundreds of children participating in various activities, including soccer, netball and ballet.

“There is also chess, but it’s not really up and running because of space issues. I can’t keep carrying my bed out of my room to make space for chess tables,” Bouwers laughs.

At his Lavender Hill home, bright soccer outfits hang out to dry as he snaps a head-and-shoulders photograph of a snotty-nosed nine-year-old who will soon join the organisation’s 200 other soccer players.

“You’re now in an area where, at night, you don’t want to be,” he says a little while later when we drive past a police nyala. A cross is placed on a pavement to mark the spot where someone was killed recently. A street is closed off by residents with tyres and rubble “to try and prevent drive-by shootings”, Bouwers says.

Gavin Walbrugh, the chairperson of the Steenberg Community Policing Forum, says: “When there are drive-by shootings, they might be aiming at hitting maybe a group of guys on the corner. But in the process of them doing that, bullets hit innocent people in the streets. That’s what happens many times.”

Under an afdakkie attached to a two-bedroom shack, about 20 young drummers are rehearsing for a memorial.

“They sold rotis to pay for the drumsticks,” Bouwers shouts proudly above the din.

In a corner, a few girls — in ballet outfits, bright pink lipstick and hair tied back into neat little bollas — shiver. But, not even the biting-cold Mother City wind blowing through the paper-thin walls can stop them from attending their twice-weekly class. 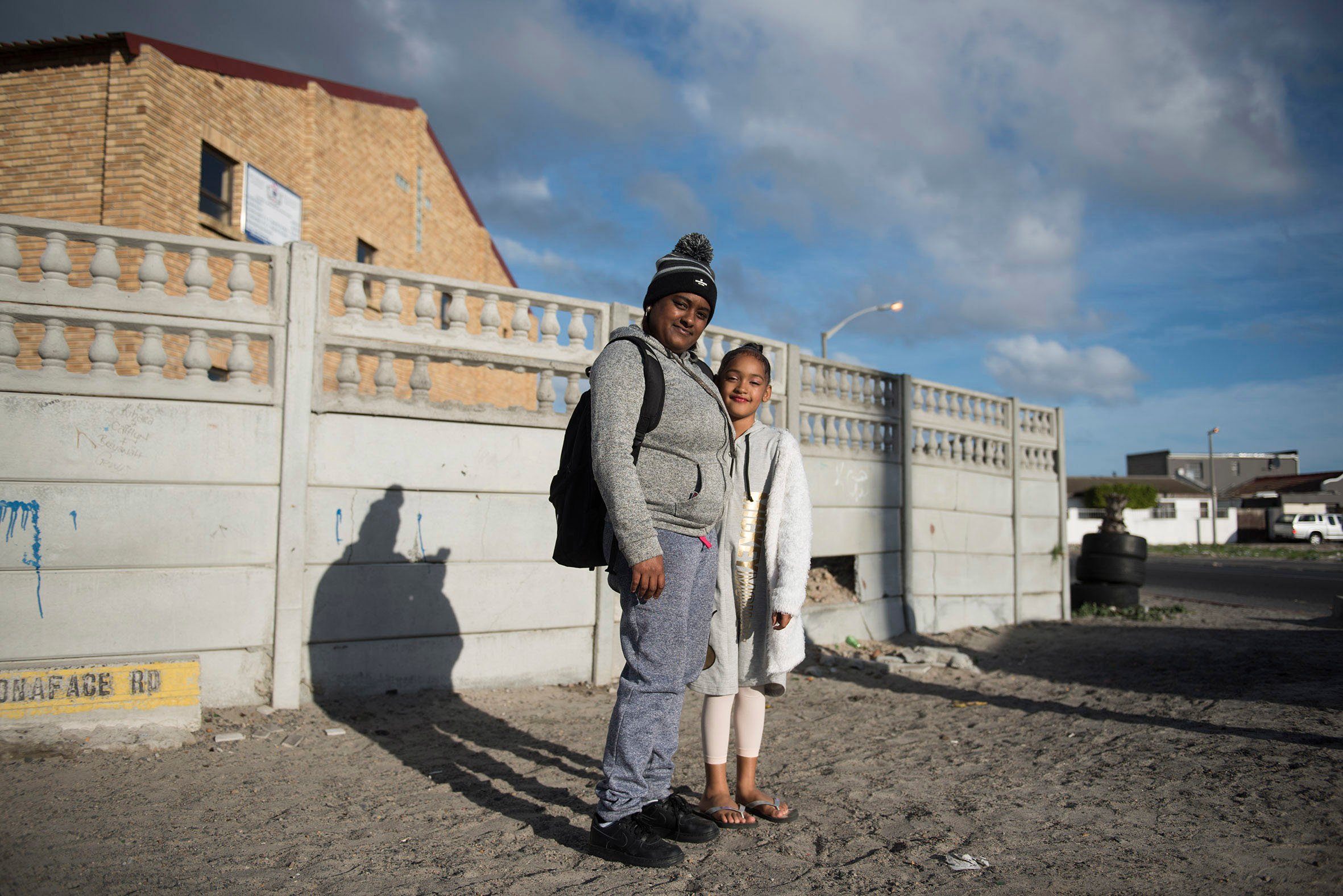 “She was two years old and started doing ballet in front of the mirror. I told her, like, ‘no, you can’t do it’. But she was, like, ‘no, I want to do it’. So her aunt recommended her to this. She enjoys it very, very much.”

The rehearsal space is far from ideal, so Bouwers intends to convert an open stretch of land in the area into a multipurpose recreational centre. This field is known in Lavender Hill as “The Battlefield” because of the shoot-outs between rival gangs that take place there.

But, the proposed project, under the name Rise Above — to have the open land fenced off to build sports fields and recreational facilities — has been hitting bureaucratic snags.

Despite having secured funding from In Place of War, an organisation based in the United Kingdom, the plans are yet to be approved by the City of Cape Town.

“We have the money, so we don’t need a cent from the city. Just for them to approve it. But it’s been 18 months,” Bouwers says.

Monishia Schoeman is the project manager for Rise Above. She says: “Sometimes the kids would find a dead body here. It’s a constant. So there’s an energy here. It’s threatening. Like spilt blood.”

Bradley Rink is a senior lecturer at the University of the Western Cape, whose speciality areas are “mobilities, cities and urban identities”. For Rink, the transformation of this “contested space” is essential in the creation of “a positive sense of place”.

Rink says that, although many people generally have a positive attachment to home, “people who live in an area that is controlled by gangs would really struggle to have this positive sense of place. So they would be constantly fighting emotions of fear as they go outside of their home — or even when inside their home”.

“But,” he adds, “if you establish this positive sense of place in your home and your community, it gives you a better sense of who you are. The sense of fear of a public space that a child may have currently in areas such as Lavender Hill could be turned around, and that would have an impact on how they sense and experience public space everywhere.

“They’ll have more engagement with the world and have a better sense of who they are and where they come from. So, to me, this would bring a positive sense of identity and connection to community. Which then has positive impacts on how that community develops in future as well.”

Parents such as Kandon and Davids are clinging doggedly to this hope.