Libra: How Zucked are we really?

Almost two Chinas. This is the number of people who use Facebook’s platforms. If just half of them used Libra, the Facebook-led digital currency announced this week, it could change the world’s financial system, experts believe.

But with Facebook’s controversial record on user privacy, regulators the world over will be on high alert, and there are already warnings against letting Facebook have an even greater influmarkence over our daily lives.

Libra is a blockchain-based, global digital currency, the development of which is led by Facebook, but supported by other multinational companies and nongovernmental organisations (NGOs), which will form the founding members of the Libra Association.

The association is a nonprofit organisation registered in Geneva, Switzerland, which will govern the Libra network and the Libra reserve — the pool of assets that will back each Libra coin issued — according to a white paper released by the Libra Association.

In a bid to address the volatility that characterises other cryptocurrencies, Libra will be backed “by a collection of low-volatility assets, such as bank deposits and short-term government securities in currencies from stable and reputable central banks”, according to the white paper.

Which banks and government securities these will be is not clear.

The white paper states that interest on the reserve assets will be used to cover the costs of the system, keep transaction fees low and pay dividends to the initial investors who provide the capital to “jumpstart the ecosystem”.

The big names throwing their weight behind Libra include the founding members Mastercard, Visa, PayPal, eBay, Spotify, Uber and Vodafone. These companies and other organisations, such as NGOs Women’s World Banking and microfinance provider Kiva, will also serve as the initial validator nodes on the Libra blockchain.

Libra’s reserve proposal — and the stability it aims to provide the currency — is one of the features that distinguishes it from many other cryptocurrencies, the most well-known being Bitcoin.

Another is its potential for mass adoption, a factor the white paper identifies as a problem for other blockchains and cryptocurrencies.

In South Africa’s case, the total estimated value of crypto assets traded over a three-year period locally is estimated at less than 4% of the amount settled on a daily basis through the interbank settlement system, housed in the South African Reserve Bank, according to government figures.

But with Facebook’s registered South African users standing at 21-million, according to the latest SA Social Media Landscape 2019 report, this could change.

Libra is a game-changer, according to Michael Jordaan, former chief executive of FNB turned venture capitalist. The currency will be far less volatile and, although this limits investment upside, it also improves the use of the currency to make normal transfers and payments, he said.

Facebook has assembled an impressive ecosystem of players around Libra, so there will be immediate ways to spend Libra, he added. “Of course it helps to have billions of users using Facebook, WhatsApp, Messenger and Instagram already so it is easy to imagine how one can pay a mate over, say, WhatsApp in the same way as you would message them.”

Currencies and payment systems are subject to the network effect, Jordaan said, which means that they become “exponentially more useful as more people become part of the network”.

Smaller cryptocurrencies are likely to disappear if Libra is successful. But, he noted, it validates that crypto­currencies have a use and will strengthen other cryptos with other uses such as smart contracts.

The announcement of Libra almost immediately raised eyebrows among European authorities. French Finance Minister Bruno Le Maire warned against Libra becoming a sovereign currency, according to a report by AFP. “The aspect of sovereignty must stay in the hands of states and not private companies which respond to private interests,” he said. The South African Revenue Service, the Reserve Bank, the Financial Intelligence Centre, the treasury and the Financial Sector Conduct Authority form part of the crypto assets regulatory working group that released a paper on regulating crypto assets earlier this year.

The group highlighted the generic risks posed by crypto assets, the largest of which is the threat to the Reserve Bank’s right to issue money and control the money supply. Should the demand for crypto assets increase significantly, demand for fiat currency would decrease, according to the group, creating a parallel, fragmented monetary system and preventing the effective transmission of monetary policy. The group also highlighted the risks crypto­currencies pose to financial stability and the national payment system. But the group did not see these risks materialising, given their limited adoption.

Libra — with potentially billions of users operating across borders — may prove a different kettle of fish.

“There certainly will be regulatory challenges,” said Jordaan. “If there is wide-scale adoption of Libra then it will become systemically important.”

Simon de la Rouviere — a blockchain expert and adviser at the Commons Stack, an open source project building funding and management infrastructure for community-driven economies — said that how regulators react to Libra is potentially the most interesting aspect of its development.

Libra will conduct due diligence in terms of anti-money laundering and know-your-customer policies, he said, which regulators should be happy with.

“What’s perhaps more interesting is whether this might approach potential antitrust or monopoly regulation due to the size of this endeavour,” said De la Rouviere. “Additionally, if it potentially affects nation states’ ability to manage their economies, I wouldn’t put it past countries and their banking infrastructure to regulate its usage beyond money-laundering concerns.”

But Facebook’s record when it comes to the protection and use of users’ data is poor. It is facing a fine of between $3-billion and $5-billion from the United States Federal Trade Commission in connection with the commission’s investigation into its platform and user data practices, it disclosed in its 2019 first quarter financial results.

Murray Hunter, a digital rights researcher, warned that Facebook’s ubiquity is a “huge concern from a data privacy and social control point of view”.

“We need to be moving into a space where Facebook has less control over our lives,” he said. Although there might be “all kinds of assurances” from Facebook to address the data privacy concerns, he noted that the company has shown, “time and again, that the promises it has made to investors and users are not meaningful”.

Along with the revelation of Libra, Facebook announced Calibra, a new digital wallet that will allow users to “save, send and spend Libra”, in WhatsApp, Facebook Messenger and as a stand-alone app. 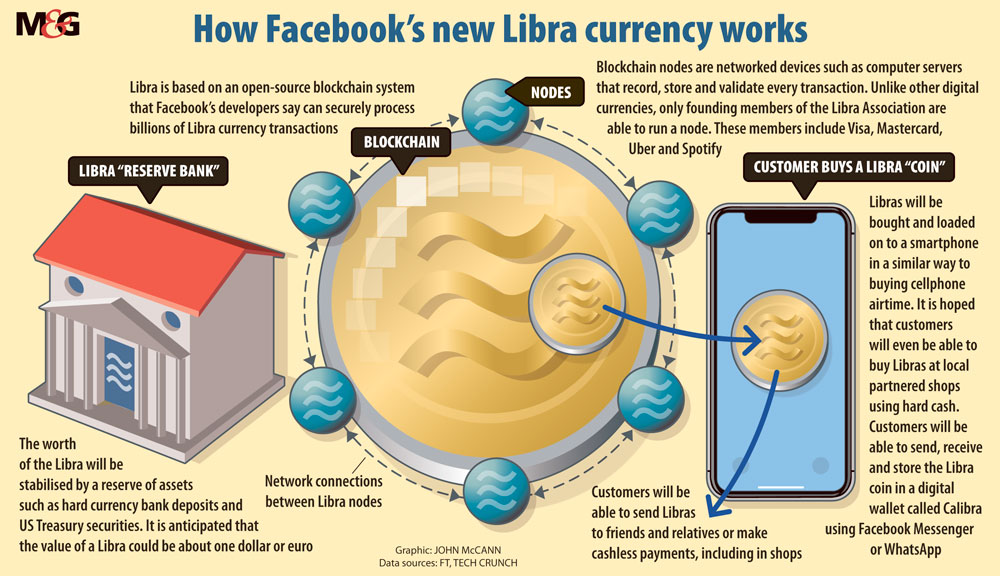 De la Rouviere noted that the intent currently is to separate concerns about Facebook’s data privacy history and the influence it could potentially have in the Libra Association. According to the white paper, the association is governed by the Libra Association Council, comprising “one representative per validator node”, which will make decisions on the governance of the network and the reserve.

All decisions are brought to the council, and major policy or technical decisions require the consent of two-thirds of the votes.

“No member, not even Facebook, can get more than 1% of the vote,” said De la Rouviere. The Libra Association will use Facebook’s weight, he argued, but it currently “doesn’t seem like Facebook has substantial control”.

When it comes to data protection and Calibra, Facebook gave assurances that it will take steps “to protect your privacy”. Calibra will not share account information or financial data with Facebook or any third party without customer consent, the company said in a statement.

“This means Calibra customers’ account information and financial data will not be used to improve ad targeting on the Facebook family of products,” it said. The “limited cases” where data may be shared would be to keep people safe, comply with the law “and provide basic functionality to the people who use Calibra”.

But De la Rouviere cautioned: “Given Facebook’s past egregious missteps with regard to data privacy, approaching this with trepidation is important.”

Financial supervisors will want assurance that Libra is 100% backed by the currency basket; competition authorities will investigate the concentration of market power; and consumer champions will challenge Facebook’s record on data privacy, he said.

“Facebook will have to clean up its act and get used to far more compliance than it has faced as a pure social network and messaging service.”