Punters getting around by renting space in a vehicle are spoilt for choice these days, with offerings from global giant Uber, the local Bolt, metered taxis and putt-puttering tuk-tuks. But this is not deterring entrepreneur Prince Pirikisi, who reckons there is still room for his service, Emergency Taxi (ET).

In what amounts to a David-versus-Goliath type struggle, Pirikisi has launched his service in the Sandton and Melville areas in Johannesburg with just 10 taxis.

The differentiator, he says, is his vehicle — the Indian-manufactured Qute (branded by Pirikisi as ETQute), which runs on the sniff of an oil rag, needing just 2.8 litres to cover 100 kilometres, and is therefore more environmentally friendly. Its tank holds eight litres and its maximum speed is 70km/hour.

But the Qute’s 0.217-litre engine can also run on compressed natural gas (CNG). Pirikisi sources this gas from two service stations: Novo NVG in Wynberg and at NGV Gas in Langlaagte.

Pirikisi says the CNG is more affordable at R9.99 a litre compared with petrol at R14.30 a litre.

ETQute has a base fare of R10 and charges R5/km. The vehicles can carry three passengers. The tuk-tuks charge R20 to R25 and Uber charges a minumum fare of R25. ET gets 15% from each trip compared with 25% in the case of Uber and Bolt.

Baba Biathoko, an ET driver, says he is in this business because he “enjoys driving”. He is also motivated by the promise that after three years, drivers have the opportunity to own the cars.

The Qute sells in South Africa at Bajaj Transerv Auto in Randburg for R75 000.

ET has developed its own app which at this stage, it has to be said, is not glitch-free. Biathoko says, however, that not many people use the app to request rides — there is also a website and a call centre. I was his first customer to use the app.

Pirikisi says he wants ET to be more “intelligent” than other e-hailing services and not just offer mobility to its clients. Users can call in and request a driver to fetch items and take them to a specific location and he wants drivers to be able to fetch groceries bought online too.

Pirikisi says he was motivated to start ET to solve problems: “I am a tech guy so I am motivated by seeing problems within our African continent — and how they can be solved through technology.”

The 10 cars have permits from the department of transport. Pirikisi says there are plans to increase the number so that ET can service customers in Bryanston, Fourways and Rosebank. Public transport analyst Paul Browning says ET’s plans are encouraging but he is wary there might be a possibility that the company does not “understand the complexity of running a transport business and might be carried away by the attention it is getting”.

“We see many of these things come and generally they do not make a big success because of the lack of experience of the people who are putting it into the market.

“There are many young people who know about the internet revolution and apps, but that does not necessarily translate into a permanent commercial operation,” he adds.

For ET to succeed, it will need “substantial organisational capabilities and finance to develop the service quickly”, he says. 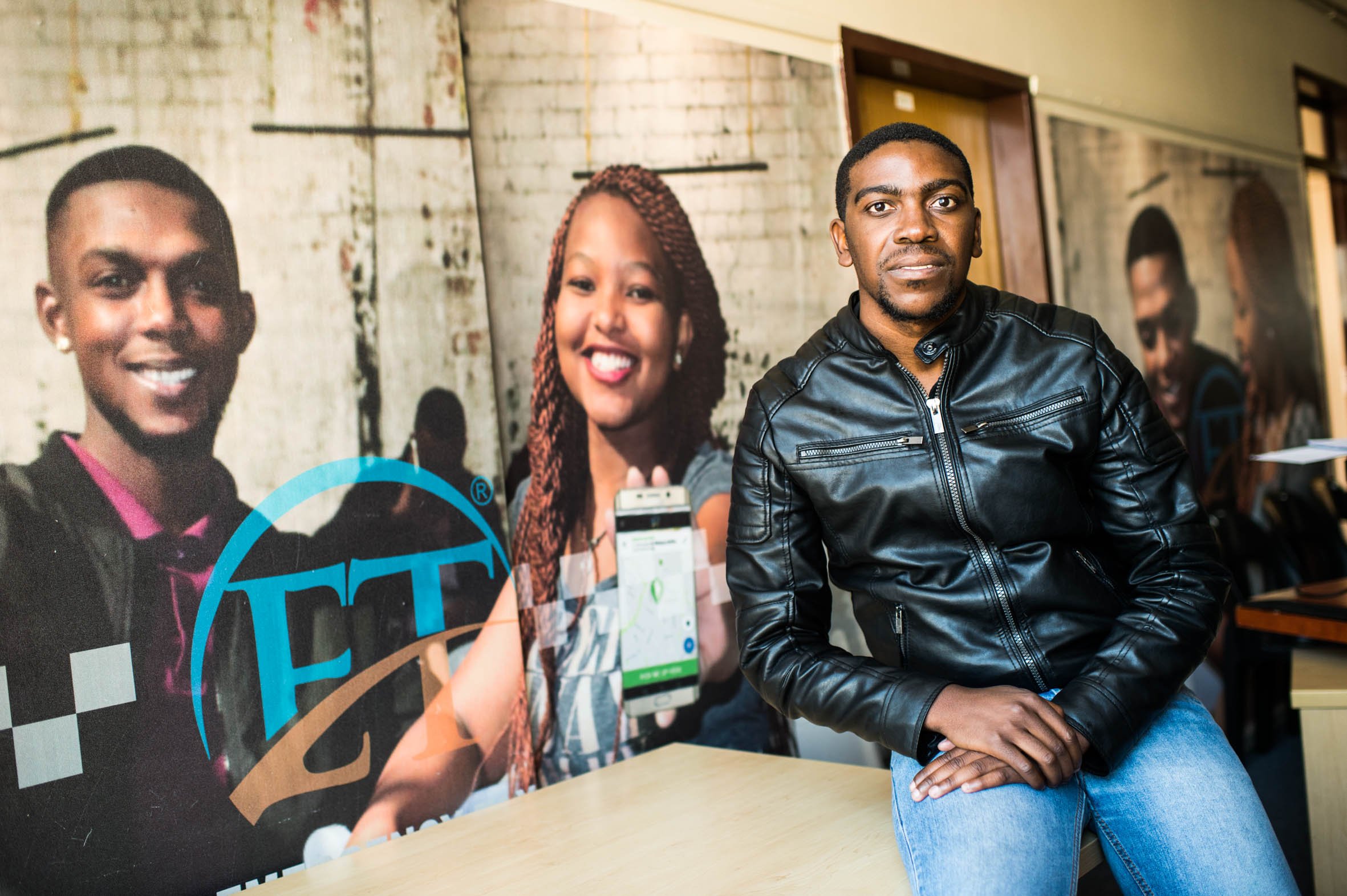 Problem-solver: Prince Pirikisi says he is motivated to use technology to provide solutions to some of Africa’s issues. (Delwyn Verasamy/M&G)