Yahya Jammeh, a brutal dictator who ruled the Gambia for more than two decades, was forced out of office in January 2017 — despite his best efforts to rig an election and then to hang on to power.

Since then, journalists, researchers and prosecutors have been combing through documents that were previously hidden, and speaking to people who were previously too scared to speak out, in an effort to understand the scale of the corruption and abuses committed by him and his regime.

Already, we know that Jammeh — or, as he styled himself, His Excellency Sheikh Professor Alhaji Dr. Yahya Abdul-Aziz Awal Jemus Junkung Jammeh Naasiru Deen Babili Mansa, commander-in-chief and chief custodian of the sacred constitution of Gambia — orchestrated the theft of nearly $1-billion, thanks to the meticulous work of the Organised Crime and Corruption Reporting Project. It documents how the former president siphoned money from government departments and laundered it through the central bank and a sophisticated international network of shady business partners and offshore shell companies.

Already, from testimony emerging at the Gambia’s Truth, Reconciliation and Reparations Commission, we know that Jammeh is personally implicated in ordering abuses, including the murder and torture of anyone who was deemed to be a threat to his power. “Kill them all, the ring leaders,” Jammeh said, according to his own chief of staff, in response to a coup attempt in 1994.

And now, thanks to a harrowing investigation by Human Rights Watch and Trial International, we know that Jammeh allegedly operated a highly sophisticated system of sexual exploitation and abuse designed to satisfy his own sexual needs. According to the investigation, Jammeh was a serial rapist, and used the full resources of state to both commit and cover-up his crimes.

A spokesman for Jammeh’s political party has denied the allegations against him.

One of Jammeh’s alleged victims was Toufah Jallow, who was just 18 when she won a national beauty pageant sponsored by the ministry of education. The pageant, held in 2014, was supposedly designed to provide young girls with the financial means to pursue further education. But Jammeh had other ideas.

Jammeh began to court Jallow aggressively, inviting her to dinner and showering her with gifts and attention. He even asked Jallow to marry him. She refused, but this did not deter the then-president.

In June 2015, Jallow was invited to a religious ceremony at State House in Banjul. This was a pretext. “It was clear what this was going to be,” said Jallow, describing how she was led to into a room with the president, who told her: “There’s no woman that I want that I cannot have.”

According to Jallow, Jammeh then slapped her and injected her with an unidentified liquid. “He rubbed his genitals in my face, pushed me down to my knees, pulled my dress up and sodomised me,” said Jallow. Several days later, Jallow fled the country, seeking refuge in neighbouring Senegal. 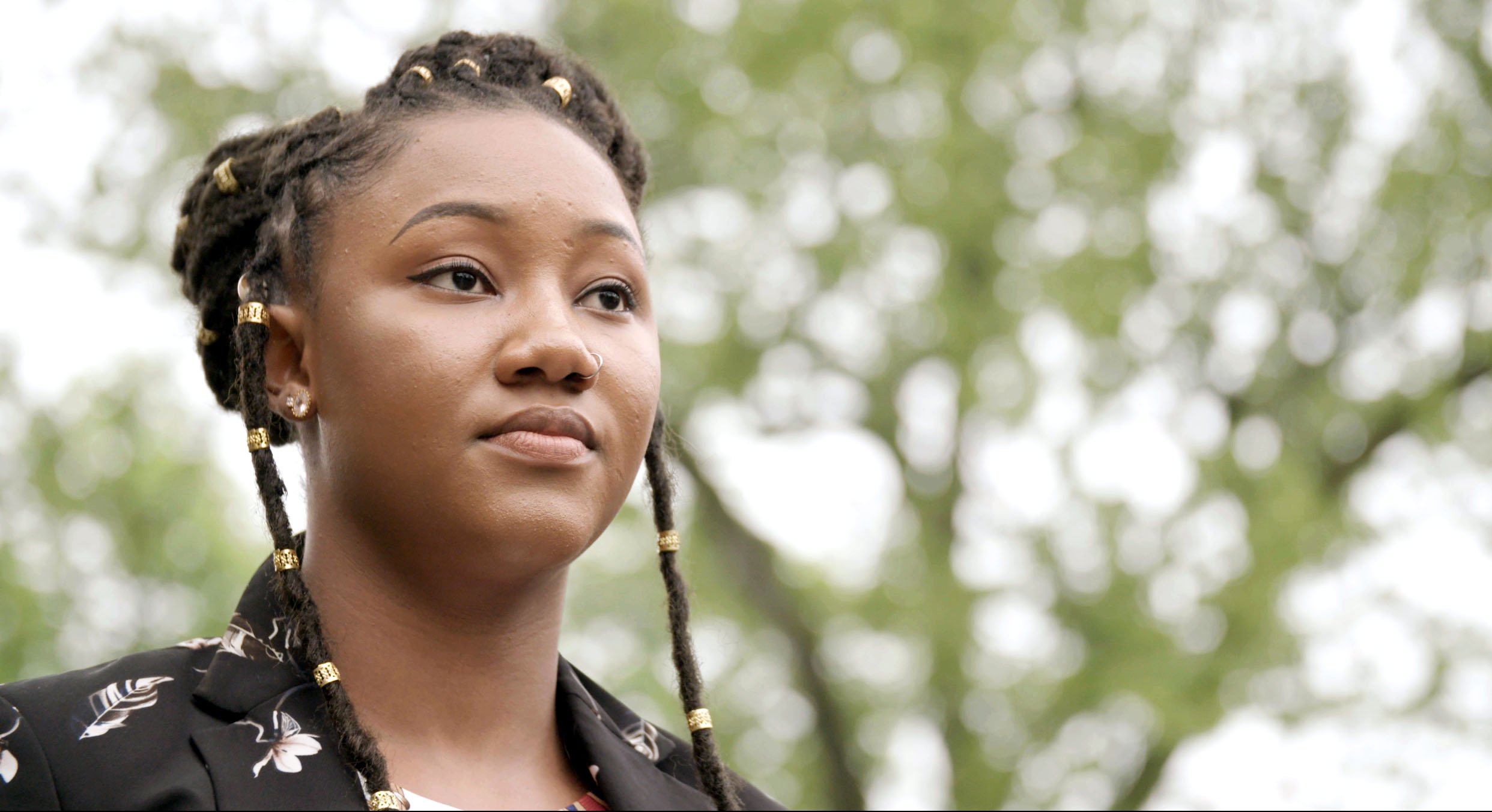 Although Jallow was the only woman prepared to speak on record, Human Rights Watch and Trial spoke to two other women who accuse Jammeh of rape and sexual assault.

The researchers also spoke to aides and officials within Jammeh’s administration, who confirmed that he forced or coerced young woman into having sex with him. This included offering cash and scholarships in exchange for sex.

“Jammeh appears to have been a serial, sophisticated sexual predator,” said Human Rights Watch researcher Marion Volkmann-Brandau. “Over the years Jammeh had created a sophisticated system, using state institutions and resources to satisfy his appetite. He recruited young women as civil servants, officially to work in Protocol. The Ministry of Education was used to organise beauty pageants. He even created a foundation for the empowerment of women that selected girls for scholarships to study abroad. And he used his bodyguards to get the contact details of young women he fancied.”

READ MORE: ‘No sex, no coffee, no ARVs’: Former president’s quackery could land him in court

Jammeh is currently in exile in Equatorial Guinea. There is no extradition treaty between the Gambia and Equatorial Guinea, but Human Rights Watch remains hopeful that the latest revelations will increase the pressure on Jammeh to face justice. 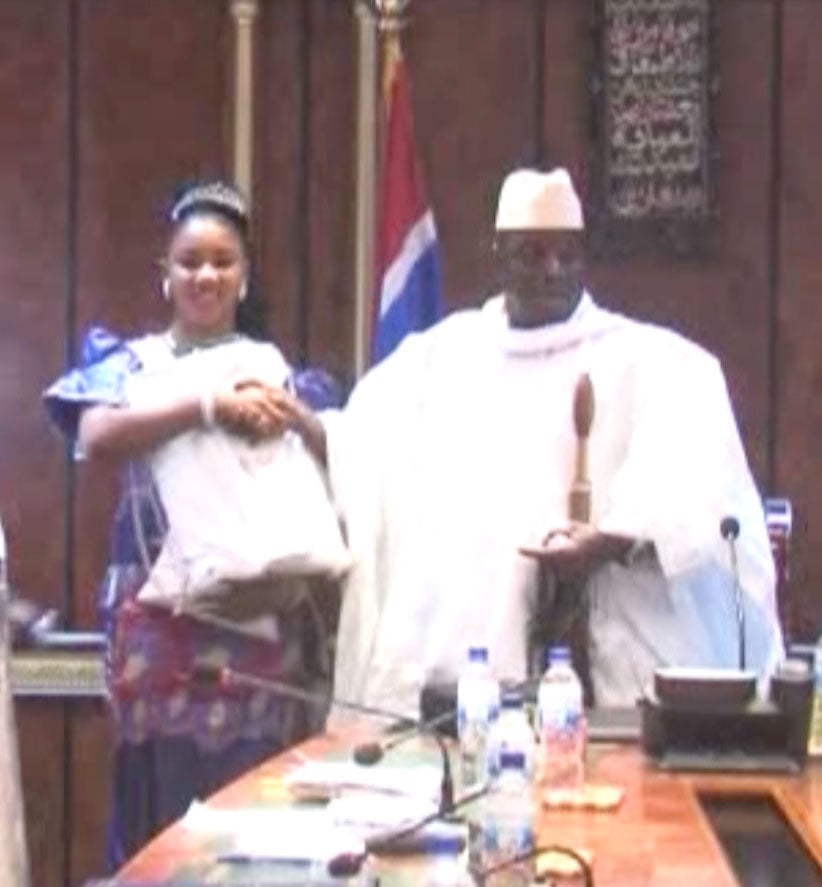 President Yahya Jammeh poses for pictures with Fatou “Toufah” Jallow and other “July 22” pageant winners, December 24 2014 in Banjul, the Gambia.

“Yahya Jammeh trapped and terrorised Gambian women, treating them like his personal property,” said Reed Brody, counsel at Human Rights Watch and a key figure in the successful campaign to see former Chadian dictator Hissène Habré brought to trial. “Rape and sexual assault are crimes, and Jammeh is not above the law.”