Statistics show that 900 people have been killed in gang-related violence on the Cape Flats so far this year, and police volunteers risk suspension by speaking out about it.

It was a Saturday afternoon when 72-year-old Sheila Abrahams* began to feel that something was wrong with her. In her home in Lavender Hill, Cape Town, Abrahams’s family began to worry because they noticed her tongue was swollen. An ambulance was called. But when it finally arrived, gun-wielding gangsters emerged from the nearby streets.

Shots were fired by the young gangsters, who are known to target emergency vehicles to rob paramedics. The ambulance was meant to be accompanied by a police escort, but on that day Abrahams’s family was told there were no police vehicles available. Abrahams’s son-in-law refused to leave her side as gunfire hailed around the ambulance. The paramedics were unable to help the woman. She died that afternoon.

A surge of intensified gang violence over the past two months has shaken the people of Lavender Hill. Afternoon care for children has been closed during school holidays as a result of the onslaught of shooting, leaving neighbours and grandmothers to look after youngsters while their parents are at work.

In the midst of this violence the Western Cape government has released statistics, sourced from mortuaries, which indicate that 900 people have been murdered this year as a result of gang violence on the Cape Flats. And 1 600 people were murdered in the province from the beginning of January to May. The MEC for community safety, Albert Fritz, described the dire murder rate as a “crisis”.

Another 13 people were shot dead over the weekend of July 6 and 7. Six women, aged 18 to 26, were killed in Marcus Garvey in Philippi East, according to Fritz. Five men, aged 18 to 39, were shot in Philippi and two other people were gunned down in Hanover Park and Delft. The provincial leaders of the community policing forum (CPF) demanded that Police Minister Bheki Cele meet them to discuss the violence.

But the people who have felt the increase in violence most are those closest to the ground. The CPF volunteers have made an unprecedented move. In breaking ranks with the South African Police Service (SAPS) officers with whom they work in the Cape Flats, they have violated official regulations that state they are not mandated to speak out about police affairs. They now risk suspension.

The Mitchells Plain CPF cluster — which includes police stations in Grassy Park, Steenberg, Philippi, Mitchells Plain, Strandfontein, Lansdowne, Lentegeur and Athlone — has made a call for Cele to appoint an independent administrator to take over the management of the police in the Western Cape. The cluster has also demanded that the South African National Defence Force (SANDF) be deployed to protect the police and escort emergency services so that officers can focus on policing.

“This is the worst year,” said Gavin Walbrugh, chairperson of the CPF for the Steenberg police station. 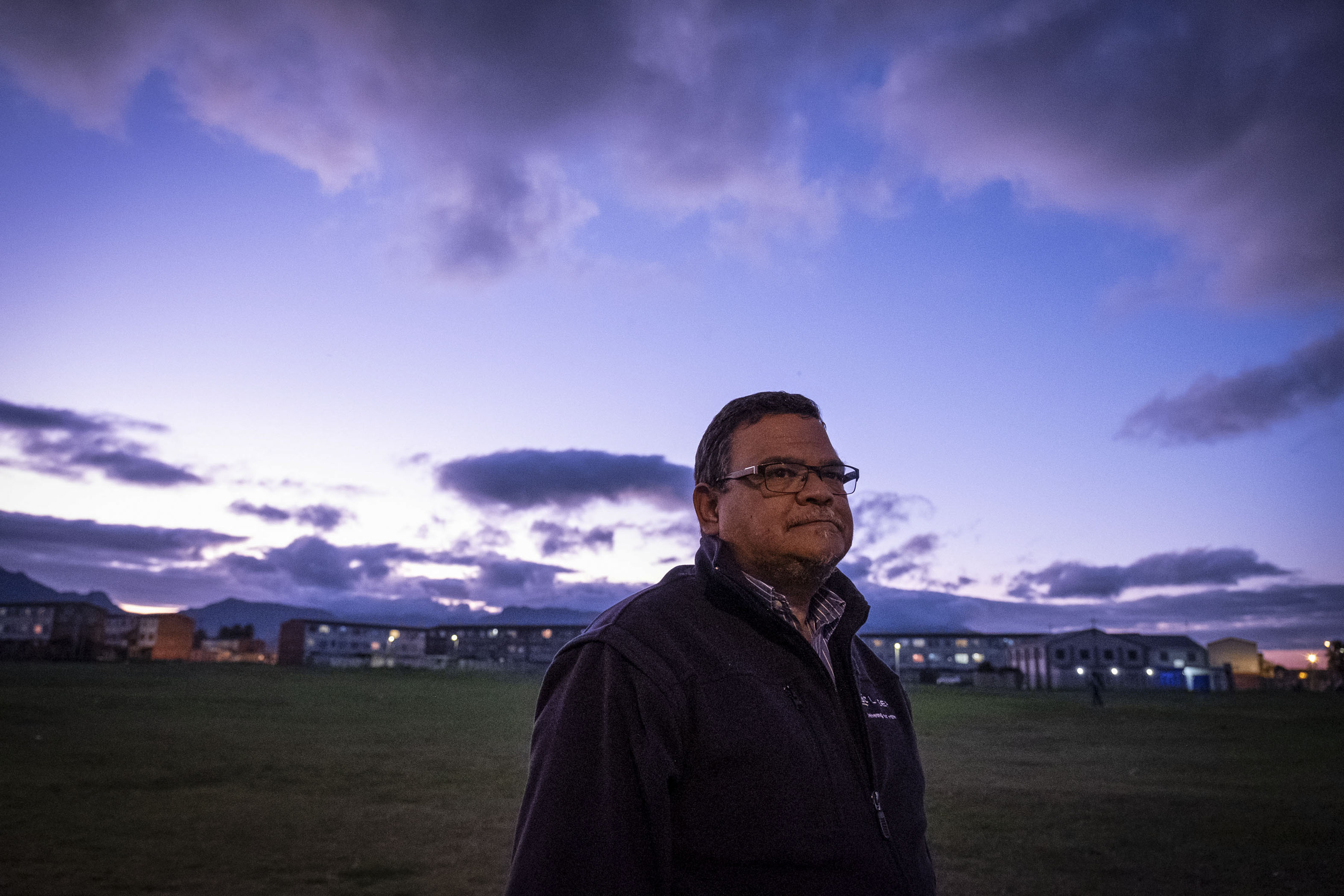 Gavin Walbrugh, from the Steenberg community policing forum, says the violence this year is worse than ever before. (Barry Christianson/New Frame)

In Lavender Hill most people are scared to reveal their names when speaking out about gang violence because they fear retribution from the gangsters who are their neighbours. But Walbrugh is adamant he wants to say what’s on his mind. He’s well known in Lavender Hill and, as one activist points out, he has the freedom to speak out because he does not live in the area.

The Steenberg police station is 1km from Lavender Hill. It remains unclear how many people have been killed overall in the area because police crime statistics will only be released in September.

For Walbrugh the numbers known are unacceptable. “It’s 900 too much. How many people must be killed before they bring in what we [are] asking for?”

The highest murder rate in South Africa is in the Western Cape and, according to Premier Alan Winde, the figure has risen at an alarming rate in 2019. In 2018, police crime statistics recorded that 3 729 people had been murdered in the province. Between November 2018 and May 2019, the province saw 2 302 murders recorded, according to mortuary statistics.

Reneilwe Serero, Cele’s spokesperson, has said the minister will only comment on the murder rate when the annual police crime statistics are released.

On a visit to the victims’ families and to meet residents in Philippi East on July 8, Cele reportedly said that he did not feel they were losing the war against crime, but that the situation was bad.

The provincial government has taken the national government to task for its allocation of police resources to the Western Cape.

“The Western Cape police is dramatically under-resourced compared to other provinces: while one officer must protect 375 people on average nationally, in the Western Cape, the ratio is 1:509,” Winde says.

The province has long been locked in a political battle with the national government over police resources, with neither party willing to take responsibility for gang warfare and its recent escalation. But residents who live with the violence are fed up.

During the dark, cold evening of June 24, Sergeant Donovan Prins (34) and his unit approached a group of people in Lavender Hill. Youngsters hanging out at night in gang territories are cause for suspicion for police officers. Prins had a superb track record of confiscating illegal firearms with his unit. During the routine patrol on that Monday evening, they thought something was amiss.

The group began firing on the officers as they drew near. Prins’s wife, Shaldene, is also a police officer at the Steenberg police station. She heard the gunfire over the police radio. She listened as her husband was shot. 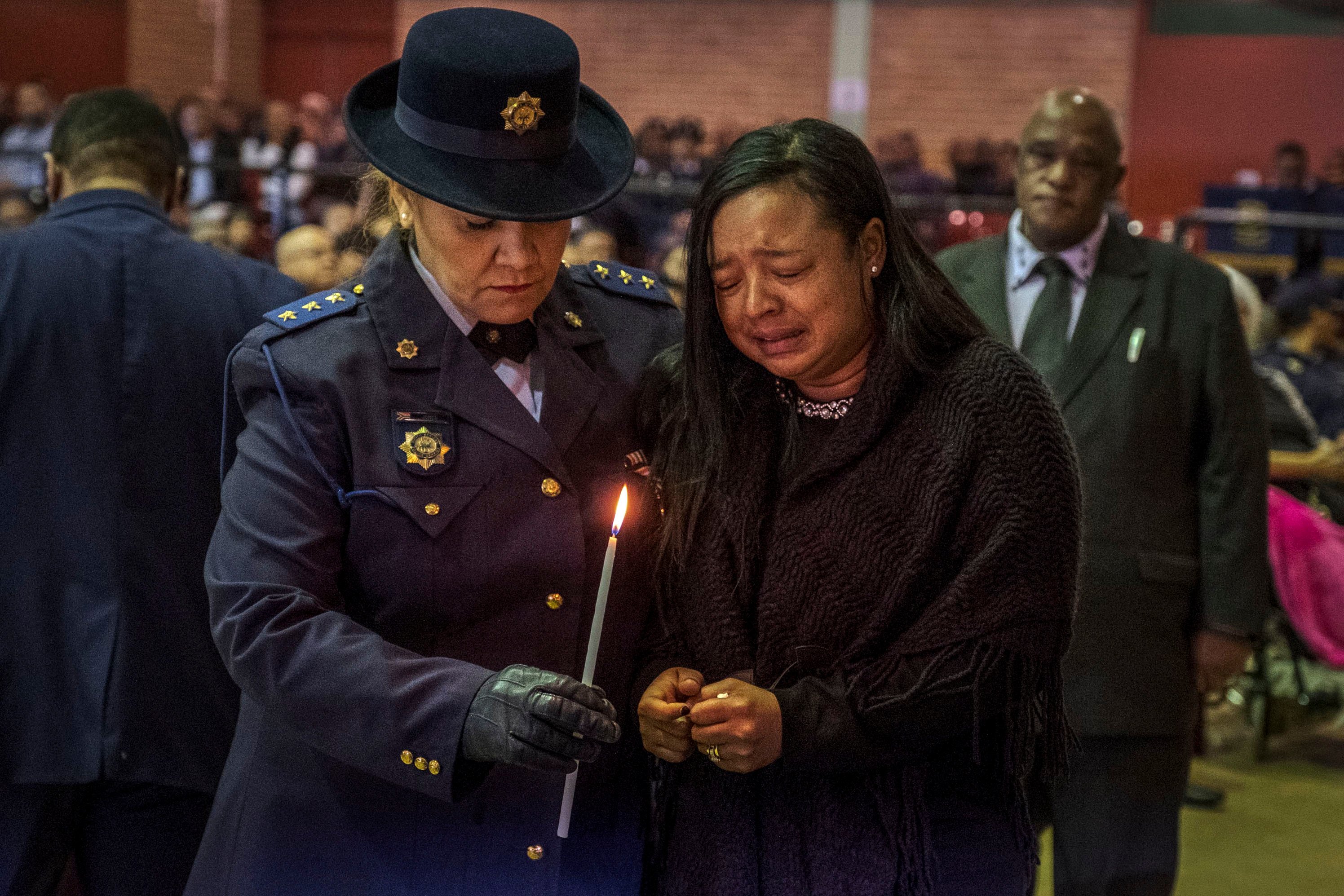 Shaldene Prins (right), who is also a police officer on the Cape Flats, is comforted by a colleague at her husband Donovan’s memorial service. (Barry Christianson/New Frame)

The sergeant was rushed to hospital, where he died. He has been described as a dedicated police officer who cared for those living in the precincts in which he worked, one of the few trusted by the residents of Lavender Hill. His death is a blow. The CPF cluster in Mitchells Plain held a press conference two days after Prins was killed to call on Cele to deploy the army and appoint an independent administrator to manage the Western Cape police.

The CPF in the area has a longstanding reputation of being outspoken on gang violence and policing, but the killings in recent months have made them even more frustrated with inadequate police resources and management.

The cluster has asked the SANDF to be deployed to help escort ambulance services and other emergency vehicles. They also want the army to act as a buffer and protect the police.

On Monday, Cele said he would call in soldiers, if necessary. He also vowed to get back to residents within five days about the demands in their memorandum to him.

But not everyone agrees with the deployment of the army. Shaheem de Vries, the director of Emergency Medical Services at the Western Cape health department, argues against the use of the SANDF because he does not trust that army personnel have been adequately trained to protect emergency services.

The CPF cluster in Mitchells Plain says there is no other option left.

Schools opened this week for the new term. But, additional law enforcement officers had to be deployed to safeguard children.