It is 10 in the morning on a weekday. There are surprisingly many children milling around Hanover Park, which is covered with a blanket of winter fog. These children should be at school.

The area is one of the communities in the Cape Flats, near Cape Town, where gangsterism and gun violence have peaked in recent months.

In 2018, the Philippi policing precinct, under which Hanover Park falls, reported 87 murders and 76 attempted murders. Most of these involved guns.

Every day, videos of running gangster gun battles are shared via social networking sites and phone apps such as WhatsApp. Shockingly, the shooters are often boys and young men.

The director of the Trauma Centre for Victims of Torture and Violence, Valdi van Reenen, says they have counselled children as young as 13 who have been recruited into gangs.

“I think we are naive when we reflect [on] why children turn to gangsterism,” she says.

“We don’t take into consideration the alternative, illicit economy. And, at the end of the day, the gang leaders are the de facto community rulers. People live in a gang [area], they co-operate with the gang. Because that is where they are going to get money, get electricity, get food and clothes. And so, young boys ask themselves, ‘Why not? Everybody else has things, why can’t I have these things?’ ”

And it’s not just boys. Van Reenen says a growing number of young girls are also being drawn into gang activity. “We must not gender stereotype. Our girl gangs are also rising. And they play a particular role. They’re the lookers. And some of them also carry weapons.”

‘At first it was about the swag’

Jason* (19) wears a faded tracksuit with his youth empowerment group’s emblem on his left breast.

His hands are rough, scarred from spending half his teenage life holding a Mandrax pipe. His hair is neatly cut and he has slits shaved into the corners of his left eyebrow. This young man who returned from the brink is part a social programme that assists young people to give up drugs and learn new skills.

Until recently he was a member of the Young Americans, an affiliate of the Americans gang, one of several street gangs that operate in Hanover Park. “I first started noticing gangs when I was about 11,” Jason says.

Jason was 16 when he joined the gang, first for companionship, but later for status, power and money.

“At first it was all about the swag, but then we started getting into gang fights. We called ourselves the Naughty Boys, and this was when I started smoking Mandrax and tik [methamphetamine]. I bunked school. When I went to school I was fighting. I was stabbed. But I never told my mommy how I got hurt.”

He dropped out of school in grade nine, and says joining a gang when he was a child was all about survival in his neighbourhood.

“Boys don’t want to be bullied. I got bullied by bigger boys. I thought the only thing that will help is taking the tjappie [tattoo] of a gang. So if you bully me again, I’m going to shoot you or stab you. I can just say, ‘Here guys. Here’s he. Attack.’ ”

The material rewards for Jason were also tempting. He started selling drugs for the Americans’ bosses: easy money from addicts who are feeding a tik and heroin epidemic spiralling out of control. 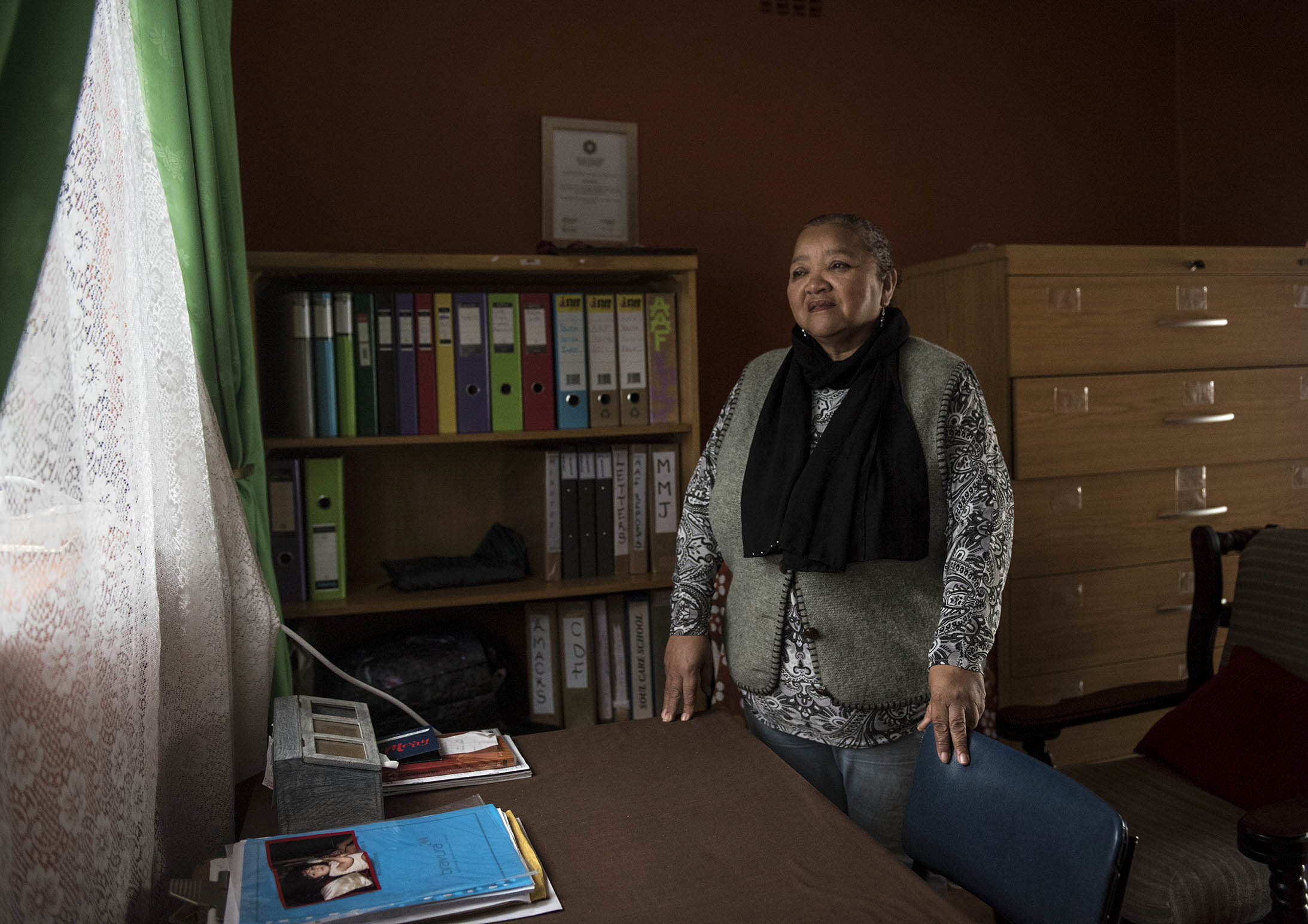 “I dropped out of school at 16, 17 years old. And that is the time they saw me. They said: ‘You’ve got nothing to do. Come to us.’ I started hanging out with them. Selling drugs. I fired guns. I got paid R200 to go shoot at other gangsters,” Jason says.

“I was making R2 000 every two weeks selling drugs. I was buying takkies and things. But I was working for a boss who had a quota: R10 000 a week. But if I was going to bring him half, then I was going to only get half.”

Jason says he came from a home with relative means compared with others in the area. For other boys, it’s a way to fight off hunger at home. Because when no one in the two-roomed tenement flat is working, gang money is all there is on which to survive.

“A lot of boys were putting food on the table. We will make sure we get what we need, clothes, shoes, drugs. Then give the rest for the home.”

Jason says many of his peers dream of a stable home environment, emotionally present parents and enough money to meet their basic needs.

“We also want a perfect life for ourselves. We can’t have that because we come out of broken homes. Some parents are on drugs, fathers who are already in jail. They say: ‘My parents are like this, so I’m also going to be like this.’ It’s like there’s no way out.”

Van Reenen says there are few social safety nets to catch children who are led down the road of crime.

“Many of them can’t even read and write. They’ve just been tossed out of the system. There’s no alternative education system. You get expelled, you sit on the corners, and then who recruits you? And then you’re drawn into these yards. You get food and free drugs. You get to hold a gun. You do a hit. And immediately you are drawn in,” she says.

The trauma centre is now counselling child gangsters as they would child soldiers in conflict regions in other parts of Africa. Many of their clients are refugees who escaped fighting in their home countries. It’s a complex situation, because the counsellors see these children as both victims and perpetrators. 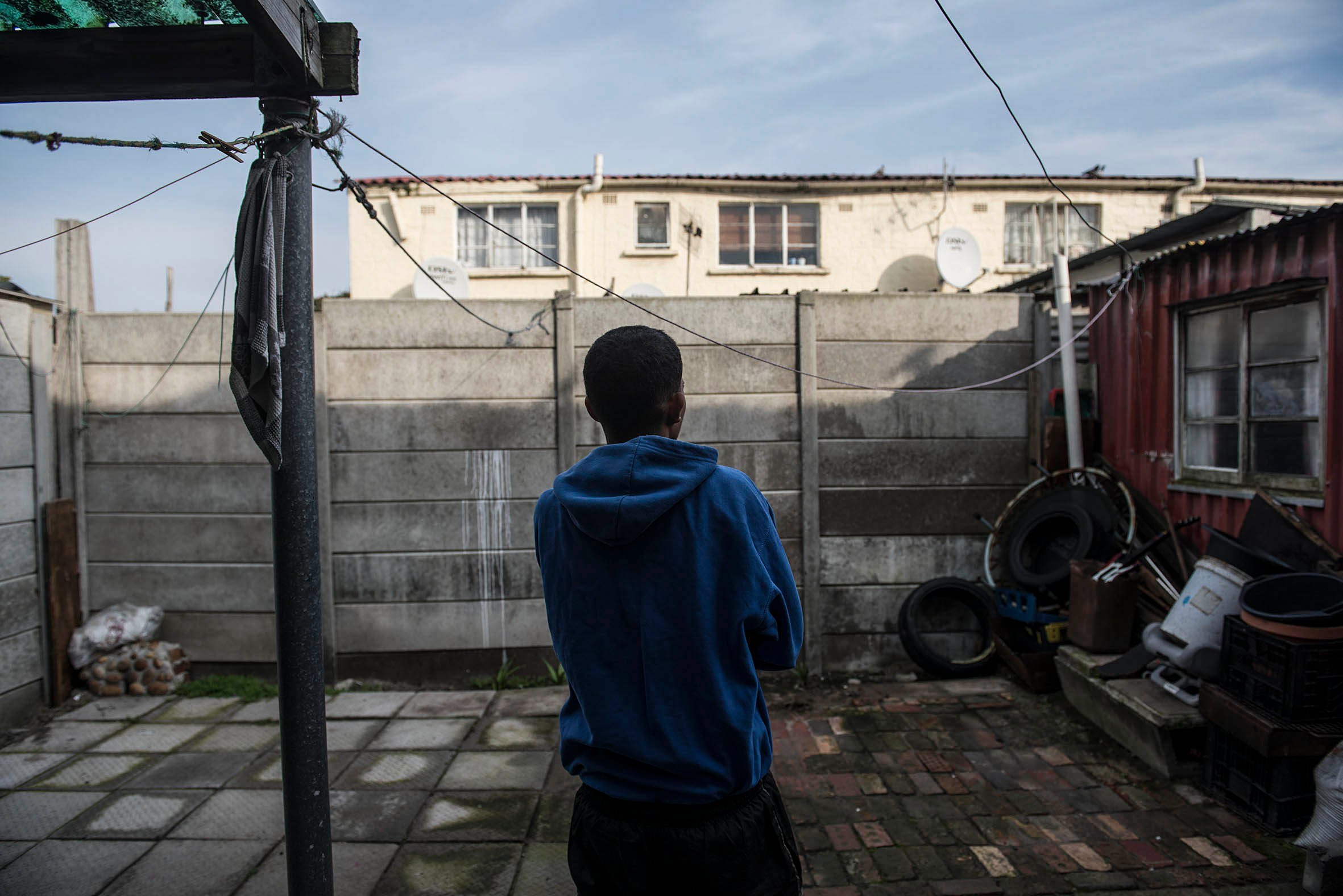 This young man was helped by The Alcardo Andrews Foundation. (David Harrison/M&G)

“On the African continent, more academics and researchers are beginning to argue for the definition of the child soldier to be extended … Here [in Cape Town] we are looking at structural and systemic violence that has bred so much poverty that an alternative, criminal economy is now seen as favourable by many. So your child soldier, your torture survivor, is no longer just your political person,” Van Reenen said.

Adolescents in traumatic environments pursue self-preservation. With no end to gangsterism, violence and poverty in sight, Van Reenen says they find ways to survive. “There are solutions. It’s about political will. How do you expect an army that comes in for three months to solve generational gangsterism? If my father, and my grandfather, was a gangster, now I’m here. It’s become normalised. It’s how conflict and aggression are dealt with. And it’s a way for people to survive. If you live on the street and you don’t become a gangster, who will protect you?”

Property of a gang

An overlooked aspect of gang culture, Van Reenen says, is the predation on girls and young women and their coercion into gangs.

“Our girls are led to believe that they are not being raped, or that they are willingly coming into a gang. So if you are a sister or a girlfriend of a gangster, you are automatically part of them. So when they say to young girls: ‘Jy is reg [you are ready]’, you will become theirs.”

She says families are then left with the questions: Do they send these girls to live elsewhere?

“Do they keep them indoors or do they allow them to be preyed upon by gangsters?

“The girl is earmarked and then somehow she is then linked to the gang. You fall in their territory, and they see themselves as having ownership of you,” Van Reenen says.

Gangs are not just a  ‘coloured’ problem

Community policing officials and anti-crime activists in Cape Town’s predominantly black townships say gangsterism is as much a problem there as it is in predominantly coloured Cape Flats suburbs.

About 1 600 SANDF troops are already in Cape Town, ready to be deployed to crime hotspots. The military says they will be there for an indefinite period.

Areas highlighted for police and military patrols include, among others, Manenberg, Hanover Park, Nyanga and Philippi. The Nyanga policing precinct has the dubious title of having the highest reported murder rate in the country, with 308 murders reported there in 2018.

The prevalence of well-organised gangs in black townships is a relatively new phenomenon. Previously, these townships had youth gangs that weren’t connected to large criminal syndicates.

In 2014 in Khayelitsha, the Vuras and Vatos youth gangs — mainly schoolchildren — ran amok. They seem to have become less active.

In previous decades, Cape Town gangsters spread their tentacles worldwide, forming cross-border alliances with Cosa Nostra and cartels in South America and southeast Asia. More recently, the Numbers gang, influential in the prison system, spilled on to the streets, showing no regard for geography or race.

“There are also gangs in Nyanga and Gugulethu,” said the Nyanga community policing forum’s Sandile Martin. “These gangs start in prison. When they are inside there they don’t differentiate between race. They are all in the 26, 27, [and] 28 gangs,” he said.

Martin said that gang activity has spread throughout Cape Town, and is not isolated to one particular township or part of the city.

“If you are in Nyanga you will see a lot of coloured guys coming in. So that means they are connecting with gangs here in this area.”

Philippi resident Ntsikelelo Konisani said the rate of unemployment and hopelessness is feeding gang culture in his area: “We need programmes for young men to keep them busy. These boys do nothing all day, so they start to use drugs, they become gangsters. Some of them are graduates. It’s just that they are unemployed.”

Konisani fears that residents’ frustration may lead to vigilante attacks on those who are suspected of being criminals.

“We are going to stand up and protect our families by ourselves if this government will not work for us. It’s a risk to live here in Philippi. But I would rather die fighting for being honest, and to fight crime,” he warned.

There is hope that the deployment of the SANDF to assist police in rooting out guns and criminals will bring some peace, but long-term systemic solutions — employment, curbing substance abuse and dealing with unstable family units — are also needed, he said.

“The deployment of soldiers will help. The training of the police and soldiers is different. If somebody shoots at soldiers they shoot back. The infiltration of the soldiers will help uncover ammunition and guns. They will get in in no time,” Martin said. — Lester Kiewit