“He had the fighting instincts of a badger trapped by hounds,” Hunter S Thompson wrote in a scathing obituary of former United States president Richard Nixon in 1994, titled “He was a crook”.

“The badger will roll over on its back and emit a smell of death, which confuses the dogs and lures them in for the traditional ripping and tearing action. But it is usually the badger who does the ripping and tearing. It is a beast that fights best on its back: rolling under the throat of the enemy and seizing it by the head with all four claws.”

It is an apt way to describe Zuma’s performance at the Commission of Inquiry into Allegations of State Capture, chaired by the mild-mannered and infinitely patient Deputy Chief Justice Raymond Zondo.

Zuma’s political game of smoke and mirrors to sidestep accountability took on a dangerous dimension this week when he accused senior ANC leaders of being spies.

He showed this week that he fights best when he is cornered, but it is likely to backfire and strengthen the hand of his new arch-nemesis — and he has had many — President Cyril Ramaphosa, whom Zuma himself plucked from the obscurity of business and convinced to return to active politics.

When real evidence by one of his former ministers, Barbara Hogan, was put to him, Zuma cracked under its weight and threw a tantrum, prompting his legal team to withdraw him from the hot seat.

It was clear that his aim was to open the Pandora’s box of infiltration of the ANC by “spies” and sit back and watch as the old flames of distrust engulfed his party. But his arrogance blinded him to the possibility of being confronted with evidence that would incriminate him in state capture and corruption, which was the point he was being led to by evidence leader Paul Pretorius SC when he cried foul.

Insiders reflecting on the matter said Zuma is seeking to create suspicion around Ramaphosa and his ascent in the ANC, but beyond Zuma’s backers and opposition parties such as the Economic Freedom Fighters, who are seeking to weaken the ANC, it is unlikely to gain traction. The opposite is likely from within the ANC — those loyal to the party are keenly aware that this matter has the potential to destroy it.

Perhaps this is the intention behind Zuma’s move, in which he alleged that two powerful foreign intelligence agencies, together with apartheid-era spies, had sought to thwart his ascent to power. He continues to ask what he did wrong and played fast and loose with facts related to the allegations against him concerning the arms deal and his palatial Nkandla residence, as well as state capture.

It is remarkably logical: the best way to neutralise the clean-up campaign, which is being spearheaded by the ANC-led government, is to destroy the ANC.

His ally in the top six, ANC secretary general Ace Magashule, who is also implicated in allegations of corruption during his tenure as Free State premier, has now called for a commission of inquiry into agents in the party ranks.

“For 30 years they tried to destroy him but here he is alive and in full throttle,” Kasrils told the Mail & Guardian. Zuma claimed that there were attempts on his life, even one this year, which involved “suicide bombers”. Kasrils said it is difficult to believe any agency would still be pursuing Zuma all these years later and after he has been removed from power. He said there were 160 attempts on the late Cuban leader Fidel Castro’s life, but this happened while he was leading a “revolutionary state”. 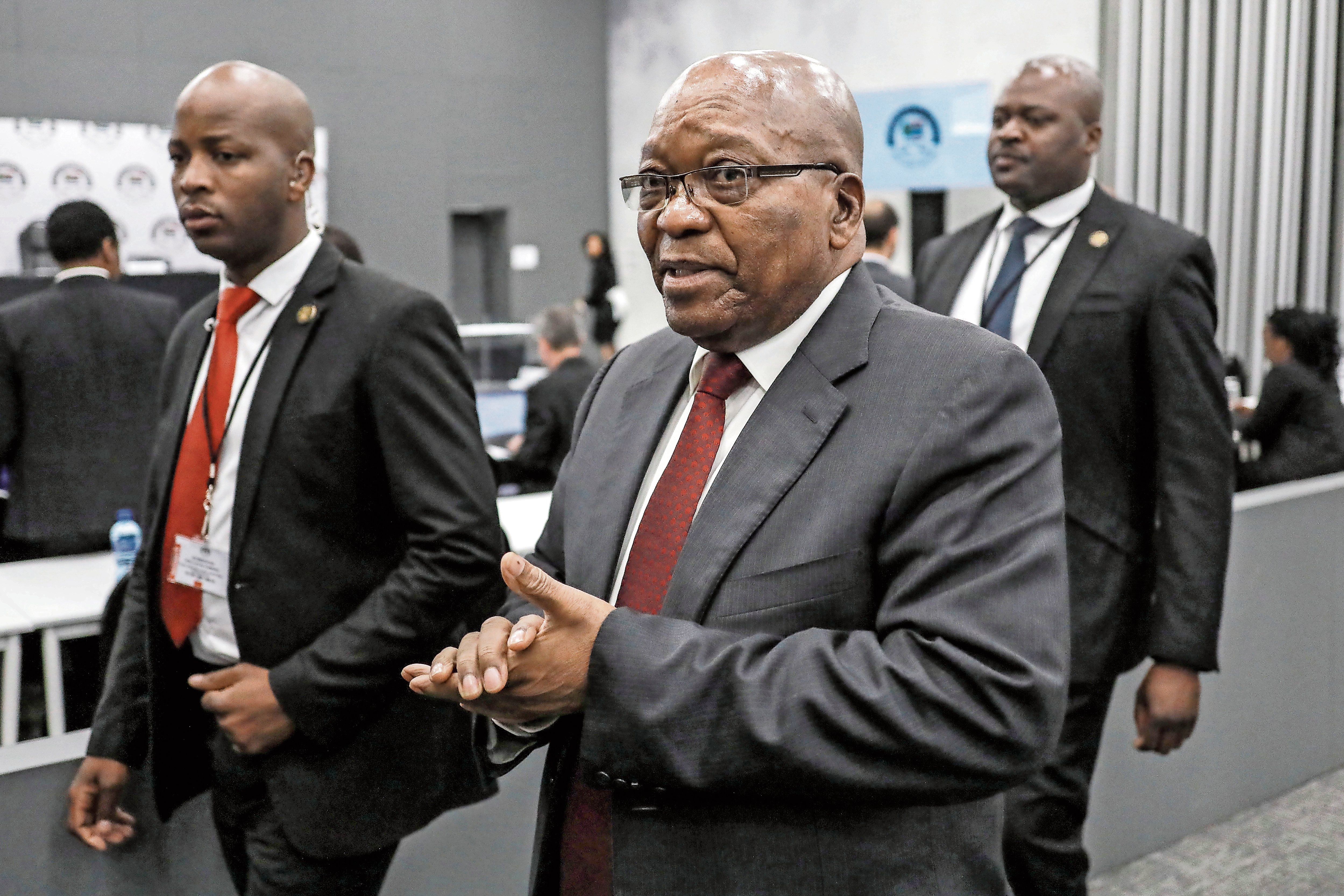 Zuma himself brought Ramaphosa back into the political fold in 2012, but their current relationship is hostile. (Kim Ludbrook/AFP)

“It shows this guy [Zuma] is not interested in anything other than himself. There is no revolutionary movement anywhere that is not infiltrated by state agencies or organisations that perceive it as a danger. But any responsible leader of an organisation is very, very cautious and careful. To start doing what he is doing is madness. It’s the absolute card of a trickster,” he said.

The difficulty, says Kasrils, is you can never prove it either way, which renders the narrative particularly dangerous.

It is not the first time Zuma and his backers have used spy allegations against their enemies. A former national director of public prosecutions, Bulelani Ngcuka, was accused of being a spy, but the allegations were later found to be untrue.

Ebrahim Ebrahim, an Umkhonto weSizwe commander and former cellmate of Zuma’s, also said it was well known that there were infiltrators in the party. This had been known for some time and it is also known that they are still there, Ebrahim said. But he said the onus was now on Zuma to prove his allegations incontrovertibly, as they were serious.

“What evidence does he have?” Ebrahim asked. He referred to the allegation by Zuma that suggested former army boss Siphiwe Nyanda was an agent and said that this was difficult to reconcile with the fact that an agent was responsible for Nyanda’s brother’s death.

Ebrahim said it was “unwise” for Zuma to air such matters publicly and in a commission of inquiry into another matter.

“It is an issue that should have been discussed in the inner circles of the movement. I don’t see how you can handle this matter and make such revelations so publicly,” he said.

Whether Zuma will return to the state capture commission this Friday is unclear; what is clear is that he wants to be heard, but refuses to be held to account. The clean-up of the state, therefore, will be hampered by those who continue to resist answering the allegations against them.

This has prompted civil society to get back into action. The Ahmed Kathrada Foundation held a briefing with civil society organisations on Thursday to announce how they will push ahead with a campaign to take the fight against state capture forward. This includes a revival of the “broad front” that helped to bring about key victories against the state capture project.

The group argues that what is at stake is South Africa’s democracy. Zuma’s fightback has, once again, divided his party and society.

To return to Thompson’s analogy, in the end the badger, although bruised and injured, succumbs to the hounds. And Zuma, like the badger, is likely to lose.