Robert Mugabe was once a fervent pan-Africanist, but he failed to act like one after he came to power — unlike the writer’s grand-aunts, who welcomed a Malawian migrant in the spirit of ubuntu

In the 1980s, when I was growing up, there was an older man I was very fond of who lived up the street from my grand-aunt’s house. On his way to or from his home, he would make regular detours to my grand-aunt, exchange greetings, often make small talk, sometimes discuss weighty matters, and soon be on his way.

He was a very short, extremely fit man who neither drank nor smoked, never seemed to wear a jersey however cold it was and spoke Shona, the language spoken by the majority in Zimbabwe, in what I thought was a strange accent.

I used to tease him about his puny physical build and he, in turn, would playfully throw barbs back at me and my sisters about one thing or the other. He was unlike most older people I knew who took their adulthood seriously.

To be sure, I was not overly familiar with him and called him sekuru baba va Jeff, in reference to his eldest son, Jeffrey. (In Shona, sekuru is grandfather or uncle.) Jeffrey was his father’s opposite, a drunk who had no care at all in the world except for his drink.

Even though sekuru baba va Jeff was a constant presence at family gatherings, be it parties or funerals, it wasn’t initially clear how he was related to my maternal grand-aunt and grandmother. My maternal grandmother’s family was made up of three matriarchs: my grandmother, whose base was in Magwegwe, Bulawayo, Zimbabwe’s second city; my grand-aunt, based in Chegutu, a small farming and mining town south of Harare; and their youngest sister, whose name I never got to know and whom I have never seen, and who had, in the 1940s or 1950s, moved to Beira, Portuguese East Africa (now Mozambique), where she is said to have married a Portuguese man.

As I grew older, and curious about the connections, I began asking some questions about who sekuru baba va Jeff was and how he fitted in the family’s taxonomy. His name, I was told, was Raphael Phiri and he had moved from Nyasaland (Malawi) to Southern Rhodesia sometime in the 1940s or 1950s.

Arriving in Southern Rhodesia, as Zimbabwe used to be known, with all his relatives in Nyasaland, my grandmother and grand-aunts, had adopted him as their brother and, right until their deaths, he had played the role of the biological brother they never had. Even after these two women died (I am not sure about the fate of the grand-aunt in Mozambique), he continued to be an uncle to the children these matriarchs left.

Phiri was one of the hundreds of thousands, perhaps even millions, of migrants, who since the turn of the 20th century, lured by the jobs on Southern Rhodesia’s farms and mines and by the Witwatersrand, the rich gold reef in Johannesburg, made the proverbial trek down south. Phiri, unlike others, never made it to Johannesburg, the desired destination, and had chosen to settle in Southern Rhodesia, where he married a local woman.

The gesture by these three matriarchs is, you could say, an active embrace of the stranger nearby, an instance of ubuntu, the secret meaning to Robert Mugabe’s statement in 1962, when he said, “Africa must revert to what it was before the imperialists divided it. These are the artificial divisions which we, in our pan-African concept, will seek to remove.”

But, on attaining power, what did Mugabe do? The early 2000s, when his belief in his eternal right to rule Zimbabwe received its most sustained challenge, are instructive. These heady days were probably the apex of the popularity of the Movement for Democratic Change (MDC), the opposition party led by Morgan Tsvangirai, who died last year. 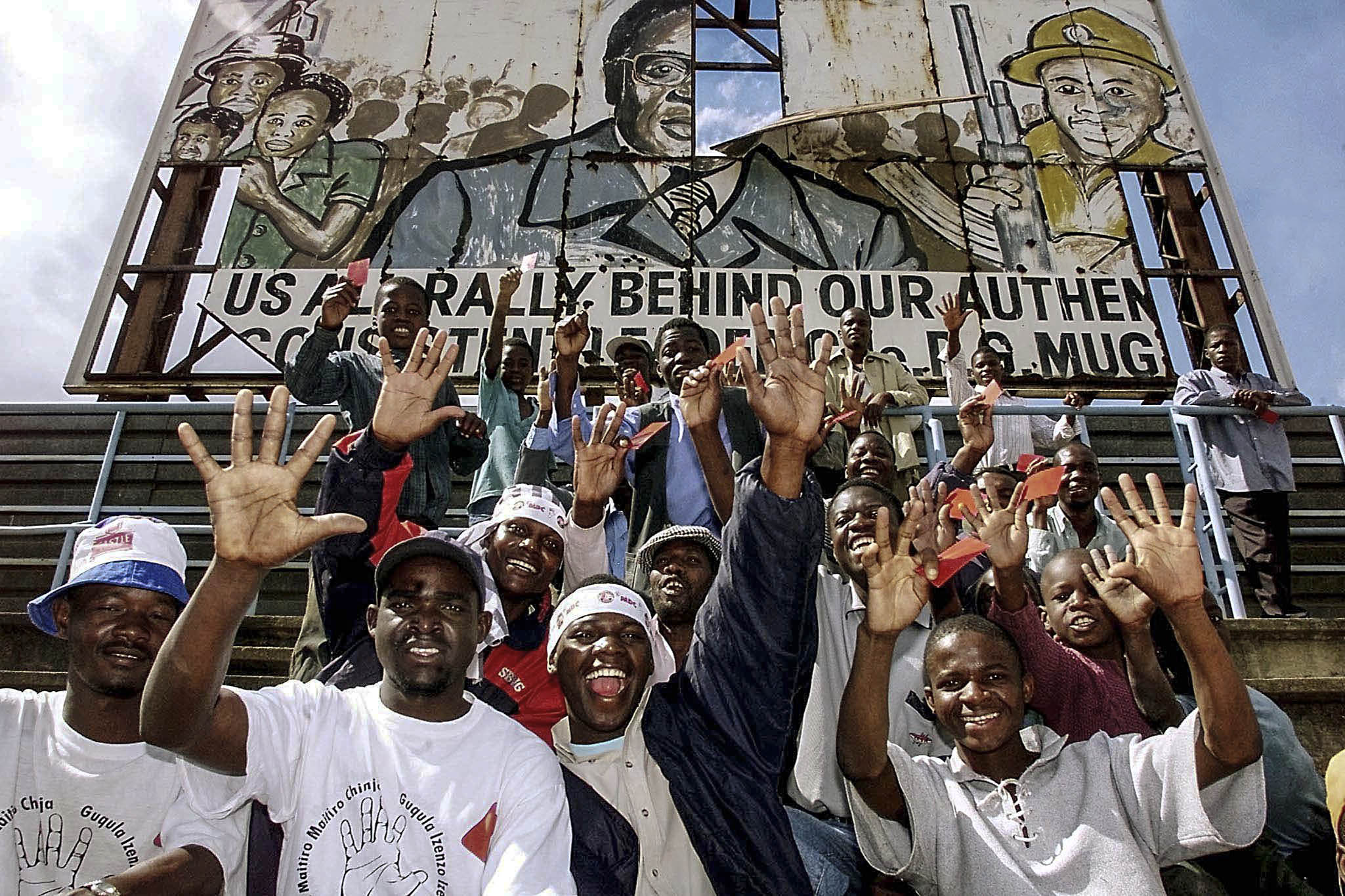 When the Movement for Democratic Change presented a sustained challenge to Mugabe’s rule by winning Harare outright in the 2000 elections, he declared its residents ‘totemless’. (Odd Andersen/AFP and Getty Images)

It seemed red, the party’s colour, was emblazoned on every building in the city; its symbol, the open palm, was ubiquitous, while Tsvangirai himself seemed to heave in the hearts of many. This was, obviously, a sad event for Mugabe, used to being the king of Zimbabwe.

In the parliamentary elections of 2000, when the MDC won huge swathes of Harare and other urban constituencies, Mugabe effectively became a tenant of a city with hostile neighbours.

He was ruling from a city in which his Zanu-PF party didn’t control even one constituency. His formation, the anti-Mugabe press gloated, had become a rural party. In pique, Mugabe declared that Harare’s people were “totemless” — the worst imaginable denigration of a person’s identity.

Had he settled in Salisbury (Harare’s forerunner), people like Raphael Phiri would have probably settled in Mbare, Salisbury’s first township, established in 1907 by the British settler government for the black underclass.

Known originally as Harare, the squalid township attracted the Malawian, probably uprooted from the banks of the big lake.

The “indigenous” Southern Rhodesian, still tied to the pastoral rhythms of yore, refused to permanently settle in these urban hovels. I have a rural home already, said the Shona man; I can’t have two homes like the people from Nyasaland and Northern Rhodesia.

So when Mugabe dismissed the people of Mbare and, by extension, all urbanites as totemless, he was saying they were not “real” Zimbabweans after all.

The totemless epithet prepared the ground for the disenfranchisement, by law, which would soon follow. Hundreds of thousands of people born in Zimbabwe but of Malawian, Mozambican, Zambian and British parentage were abruptly told they were not Zimbabwean. Because they were, in the parlance, “aliens”, they couldn’t vote and nor were they eligible for a passport. They had become stateless or, to use the Nigerianism, “beasts of no nation”.

In episodes reminiscent of Kafka, befuddled people born in Zimbabwe were told by home affairs bureaucrats to go renounce other citizenships to which they were entitled. Yet on reaching the Malawian, Zambian or Mozambican embassies, they were told it was impossible to renounce what you don’t have in the first place.

Vanished was Mugabe, Kwame Nkrumah’s so-called disciple, who had earlier advocated the shredding of the Berlin Conference’s cartography in Africa.

In his lashing out at the “totemless” ones in his bid to rule forever, gone was the proto pan-Africanist, who had earlier seen his country’s ills as indistinguishable from the rest of the continent, a man who himself had lived in Alice, South Africa, when he was at university at Fort Hare, and who had taught in Zambia, winding up in Ghana where, he claims, he had found Nkrumah.

What we had left was a tribalist, policing the borders drawn in Berlin with an embarrassing fervour and a menacing exactitude.

By talking about Mugabe and Nkrumah in the same breath, I am soiling the memory of my maternal forebears but, bear with me, it’s in aid of a bigger point. My grandmother and her two sisters, who didn’t have any formal education and probably died without knowing the theories about pan-Africanism, were better pan Africanists than Mugabe.