Before Eskom started building new capacity, the “drug” I’m referring to was a mild sedative, so no one was worried. And, full disclosure, I was one of the people administering it.

But what is this “drug”? It’s simple: the drug is the current pricing policy for determining how much Eskom charges for electricity.

The current pricing structure is killing growth and the economy, and the government is increasing the dosage by making taxpayers pay for bailouts of Eskom.

This article focuses only on the drug, its effects and the solution. Unless the current situation is understood and the means to solve it is accepted, the government will continue to increase the drug dosage for Eskom — with disastrous results.

The current pricing policy rewards Eskom’s inefficiencies and encourages irrational decisions. This policy gives Eskom the right to recover all its costs, even for loss-making plants, inefficient purchasing, and maintaining or repairing rapidly deteriorating power stations, not to mention load-shedding.

This policy was designed and applied even before Eskom started building new capacity. The government and the National Energy Regulator (Nersa) recognised in the early 1990s that this policy had to change, but no one had the conviction nor the appetite to change it.

It’s clear that the electricity price is spiralling out of control, and this is causing Eskom’s death spiral.

The graph below shows that Eskom’s reported average revenue per kilowatt-hour (expressed as its average cost of electricity) has grown from 14.98 cents per kWh in 2002 to 90.01 cents per kWh in 2019 — an increase of more than 500%. These increases are one of the significant contributors to industry’s and mining’s decline and disinvestment in South Africa. 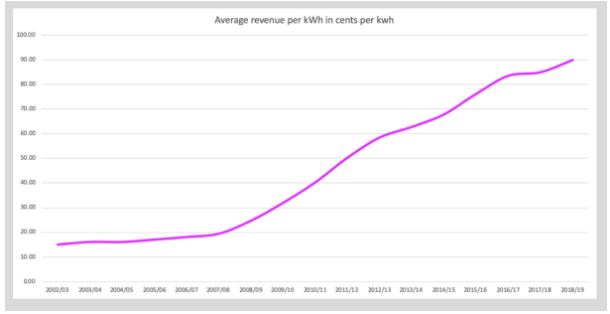 Notwithstanding this clear evidence of disaster, Eskom and the government keep baying for further price increases, and consumers and taxpayers are having to foot the bill.

The next graph illustrates that electricity growth has been flat since 2002 and is now decreasing, mainly due to the decline in industry and mining. This will continue if the pricing policy is not fixed.

There is no incentive for Eskom to fix its current disastrous new-build programme, because it is paid for new power plants even before they produce electricity. The current new build programme is years behind Eskom’s agreed schedule and continues to flounder.

The graph below, based on Eskom data, shows that breakdowns are increasing and now at more than 20% of installed capacity. Eskom’s historical standard was less than 3% and the current, board-approved standard is less than 10%. 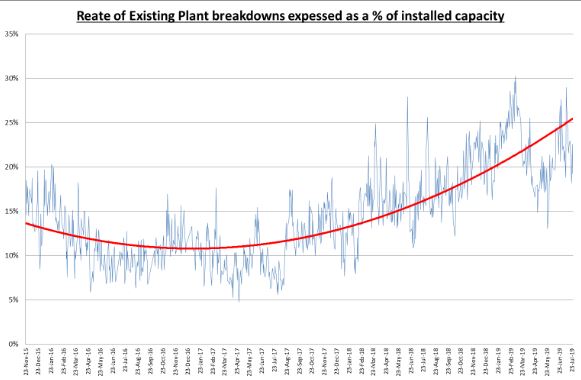 Eskom’s financial woes are, the power utility claims, the result of too-low a tariff, rather than bad debt and poor management of costs — in particular, coal costs, maintenance and wages. 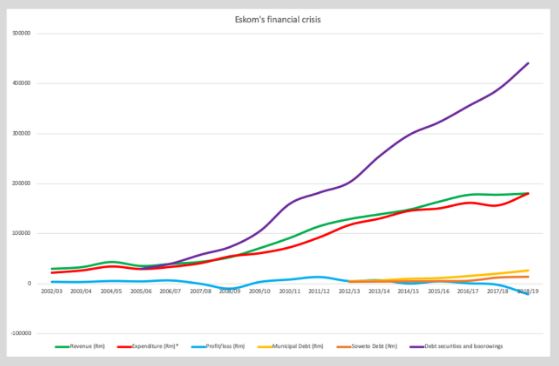 The graph above shows that revenue increases, mainly as a result of tariff hikes, have done enough to cover Eskom’s basic operating costs (including inefficient costs) and sometimes even yielded a small profit. It is the power utility’s massive debt costs that have now pushed the Eskom to a record loss, forcing the government to step in and bail it out.

Change the current price policy so that it rewards Eskom for effective management and penalises it for poor management. The design of this solution is simple, will not cost much and will be easy to implement with the support of the government and the assistance of Nersa and Eskom.

It will take time for Eskom to recover, but most assuredly, it will recover and South Africa’s economy and employment will benefit.

I commit myself and other knowledgeable experts to assist in designing the right policy and advocating for its implementation immediately.

Mike Rossouw is the chief executive of Independent Energy Thought Leader. He previously worked as an energy thought leader at Eskom and was formerly the chairperson of the Energy Intensive Users Group.

Mike Rossouw
Mike Rossouw is the chief executive of Independent Energy Thought Leader. He previously worked as an energy thought leader at Eskom and was formerly the chairperson of the Energy Intensive Users Group
Facebook
Twitter
WhatsApp
Linkedin