Silencing the ‘rudest’ woman in Uganda

In 1948, activist-intellectual Semakula Mulumba received an invitation to dinner from the Bishop of Uganda, Cyril Stuart.

Mulumba had the courtesy to reply, but that was about the only courtesy he showed the bishop in a blistering 18-page response that skewered Stuart personally and professionally. Among other insults, Mulumba described him as a crook, part of “a gang of professional thieves that hide their colonial booty in the British law”, who, by the “disdainful filth of your secret actions”, was loyally serving a “godless state”.

And no, Mulumba would not be coming to dinner.

Mulumba’s intemperate response was carefully calculated. “[It] was rude, deliberately rude, an attack on the forms of manners and politeness that had shaped both British and Ganda deployments of power and influence in Buganda since at least the beginning of the Uganda Protectorate in 1900,” wrote the academic, Carol Summers, in a journal article examining the politics of radical rudeness in pre-independence Uganda.

Mulumba realised that manners are a form of political control. To reject the system, he had to reject the social niceties that underpin the system as well. As Summers explains: “For Buganda’s activists, the effectiveness and power of civility, manners, and polite institutions meant that disrupting them was an essential prerequisite for true change or popular politics.”

Seventy years later, at least one activist in Uganda is taking Mulumba’s example to heart.

Stella Nyanzi, the Makerere University academic, was sentenced last week to 18 months in prison. She was convicted under the country’s cybercrime laws of “harassing” Yoweri Museveni, after the publication of her poem that attacked the president’s record in office in the most vulgar terms possible (see the article below: “You should have died in birth, Yoweri Kaguta Museveni”).

The poem is a masterpiece of calculated obscenity. “I wish the acidic pus flooding [your mother’s] cursed vaginal canal had burnt up your unborn fetus,” she wrote.

Nyanzi appeared in court to hear her sentence via video link. Before being found guilty, she told the court room: “I planned to offend Yoweri Museveni Kaguta, because he has offended us for 30 plus years. We are tired of a dictatorship.”

She also bared her breasts and screamed obscenities.

During the trial, prosecutors have tried to characterise Nyanzi as mad, but Nyanzi knows exactly what she is doing. She has referenced Mulumba’s example to explain her actions and, shortly before her trial began, she told CNN: “Politeness has been taken, it’s been held captive, and they don’t listen any more. So sometimes all you have to say is ‘fuck it!’. And then people will hear and take you seriously.”

So strongly does Nyanzi believe in the power of “radical rudeness” that it even factored into her decision on how best to represent herself in court.

“They took a political approach as opposed to a legal approach,” said Nicholas Opiyo, a lawyer who used to represent Nyanzi. He says Nyanzi and her legal team could have pursued other defences with a greater chance of success — such as challenging the law under which the charges were brought — but wanted the opportunity to make their case at trial with all the accompanying publicity. 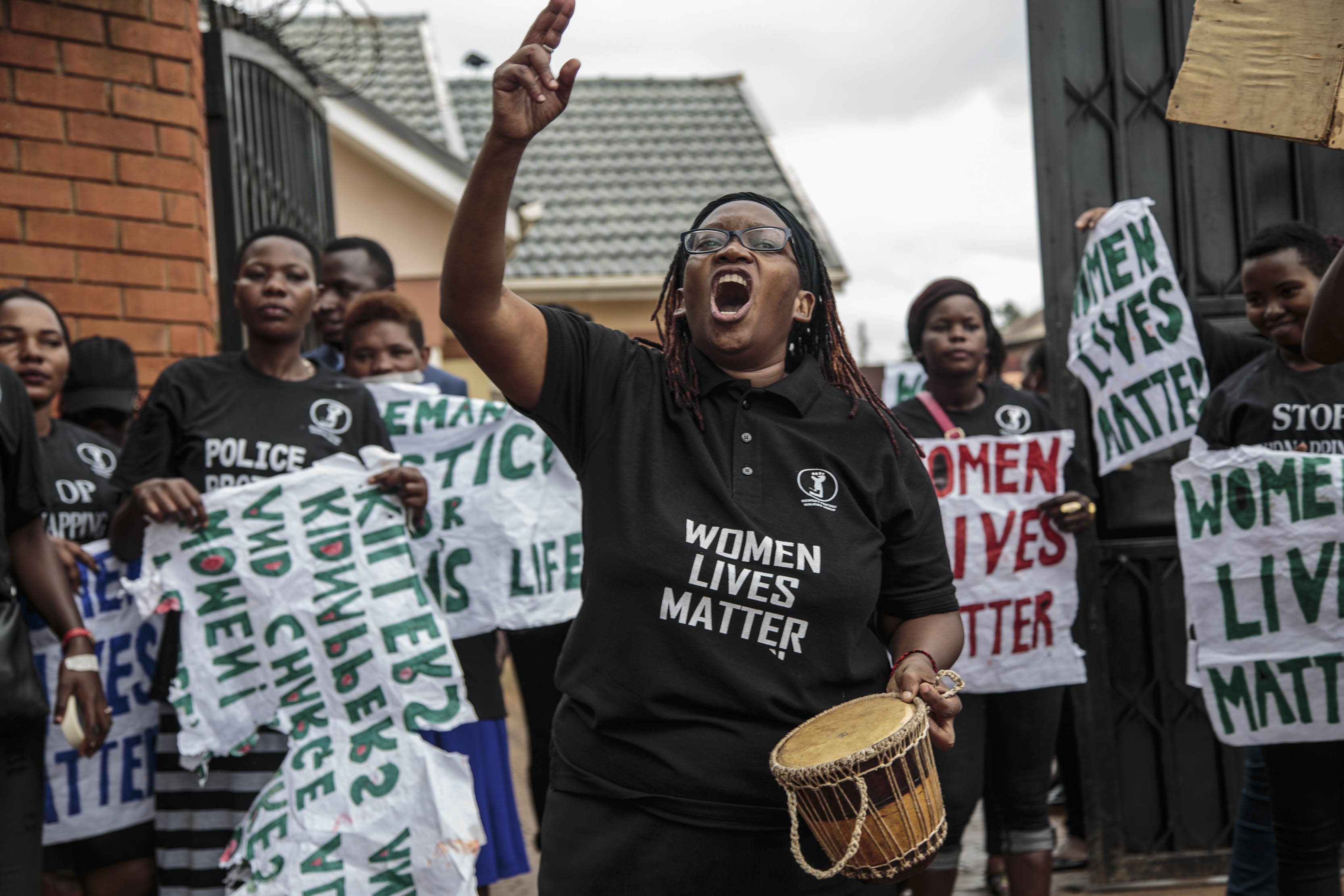 Nyanzi was sentenced to 18 months in jail on August 2 after being found guilty of cyberharassment of President Yoweri Museveni. She has already spent nine months in prison awaiting trial. (Sumy Sadurni/AFP)

In African Arguments, a pan-African site for news and opinion, Ugandan journalist Rosebell Kagumire describes Nyanzi as the “rude vagina poem-writing hero Uganda needs”, outlining her long track record of using offence and obscenity to make serious political points. “Nyanzi has become notorious in Uganda for using this strategy in a number of ways.

In 2016, for example, the academic staged a nude protest at Makerere University, her former employer, following a dispute. In 2017, she rebuked Education Minister and First Lady Janet Museveni for claiming there was no budget to buy sanitary pads for girls in school. In a post on Facebook, Nyanzi criticised Janet and referred to the president as a “pair of buttocks”.

“Nyanzi was charged with ‘cyberharassment and offensive communication’ for that post too … Nyanzi’s current court case therefore is just the latest instance of her standing up to a patriarchal society and government widely accused of corruption, bad governance and economic mismanagement.”

But not everyone is convinced that Nyanzi’s approach is the most effective. Opiyo worries that it may alienate potential supporters. “My personal view is that she is not winning friends; she is losing friends by her strategy. There are people that sympathise with her but for the approach she has taken.”

Again, there may be historical lessons to be learnt from Mulumba. As Summers concludes, his rude letter to the bishop, although eye-catching, did little to alter the status quo. “Disruption, rudeness and confrontation … produced equivocal results that pushed even political activists back from radical ideas of democracy, elected chiefs, and free markets. Loyalty to the kabaka [king] and a reassertion of the people’s affiliations with the powerful re-emerged, bound in common interest and nurtured through rituals of deference and hospitality.”

For now, however, there can be little doubt that Nyanzi’s radical rudeness is one of the most strident methods of resistance to the Museveni regime, which has been in power since 1986.

Having already spent nine months in jail awaiting trial, Nyanzi has nine months of her sentence left. She will spend the time in the knowledge that her insults have struck a nerve — and, ironically, that the government’s harsh response has only served to underscore her criticisms.

‘You should have died in birth, Yoweri Kaguta Museveni’

The poem for which Stella Nyanzi was locked up, first published on September 16 2018

How bitterly sad a day!

I wish the smelly and itchy
cream-coloured candida festering in Esiteri’s [the president’s mother] cunt had suffocated you to death during birth.

Suffocated you just like you are
suffocating us with oppression,
suppression and repression!

How painfully ugly a day!

I wish the lice-filled bush of dirty pubic hair overgrown all over Esiteri’s unwashed chuchu had strangled you at birth.

Strangled you just like the long
tentacles of corruption you sowed and watered into our bleeding economy.

How nauseatingly disgusting a day!

I wish the acidic pus flooding Esiteri’s cursed vaginal canal had burnt up your unborn fetus.

Burnt you up as badly as you
have corroded all morality and professionalism out of our public institutions in Uganda.

How horrifically cancerous a day!

I wish the infectious dirty-brown discharge flooding Esiteri’s loose pussy had drowned you to death.

Drowned you as vilely as you have sank and murdered the dreams and aspirations of millions of youths who languish in the deep sea of massive unemployment, and under-emplyment in Uganda.

How traumatically wasted a day!

I wish the poisoned uterus sitting just above Esiteri’s dry clitoris had prematurely miscarried a thing to be cast upon a manure pit.

Prematurely miscarried just like you prematurely aborted any
semblance of democracy, good
governance and rule of law.

Yoweri, they say it was your
birthday yesterday!

How morbidly grave a day!

I wish that Esiteri’s cursed genitals had pushed out a monstrously greenish-bluish still-birth.

You should have died at birth, you dirty delinquent dictator…

You should have died in birth, Yoweri Kaguta Museveni.