Ten years ago, a Swiss maestro was chasing an American’s record at Wimbledon. It took him a tiresome four hours and 17 minutes in the final to finally engrave his name as statistically the best men’s tennis player of all time. Now, there is an American woman who has been hammering at the door of Margaret Court’s record of 24 Grand Slam titles at this year’s US Open, which is currently under way.

With 23 Grand Slam titles under her belt, Serena Williams moved a step closer to the record when she beat her sister Venus in the 2017 Australian Open final, but has just not found any way to draw level with Court’s achievement since then. Williams missed the remainder of the 2017 calendar due to pregnancy; when she returned, she reached three finals, but lost them all. Her most recent defeat came to Simona Halep at Wimbledon in July.

Seven-time Grand Slam winner and former men’s world No 1Mats Wilander spoke about Williams’ chances at Flushing Meadows, saying that the American will be “concerned”, at the very least. “Last year Naomi Osaka played an unbelievable match here; Simona Halep has played really well in Wimbledon. Serena will be a little bit nervous knowing she did not go through the finish line lately,” Wilander said.

Williams was beaten in straight sets by Osaka in last year’s US Open final, but a superlative tennis showdown was overshadowed by a dispute between the umpire and Williams. The crowd reacted with boos at the officiating and it was ultimately an experience that made Williams consider tossing away her racquet for good.

Wilander has urged Williams to forget last year, and so has her coach, Patrick Mouratoglou, who believes that her energy is pivotal and should be focused solely on matches, with any sentiment or emotion driven to the back of her mind.

Williams took her coach’s words to heart going into her first-round match against Maria Sharapova on Monday. Emotions could have overcome the six-time champion in this matchup, especially with the controversial history between the two athletes.

But Williams was rampant, dominating the Russian from the net to the baseline. She made light work of Sharapova, cruising to a 24-minute first set win. The second set was a facsimile of the first and Williams wrapped up the match 6-1, 6-1, in less than an hour.

Not only did Williams cement her intent, but she also invalidated the concerns critics had about her before the beginning of the tournament.

Williams also acknowledged the overwhelming roars she received when she made her way onto the court at the Arthur Ashe Stadium. She addressed the crowd, saying: “Thank you for supporting me. I’ve said it once, but I’ve had a lot of tough matches here and a lot of tough losses, but coming out tonight makes it all worthwhile.” 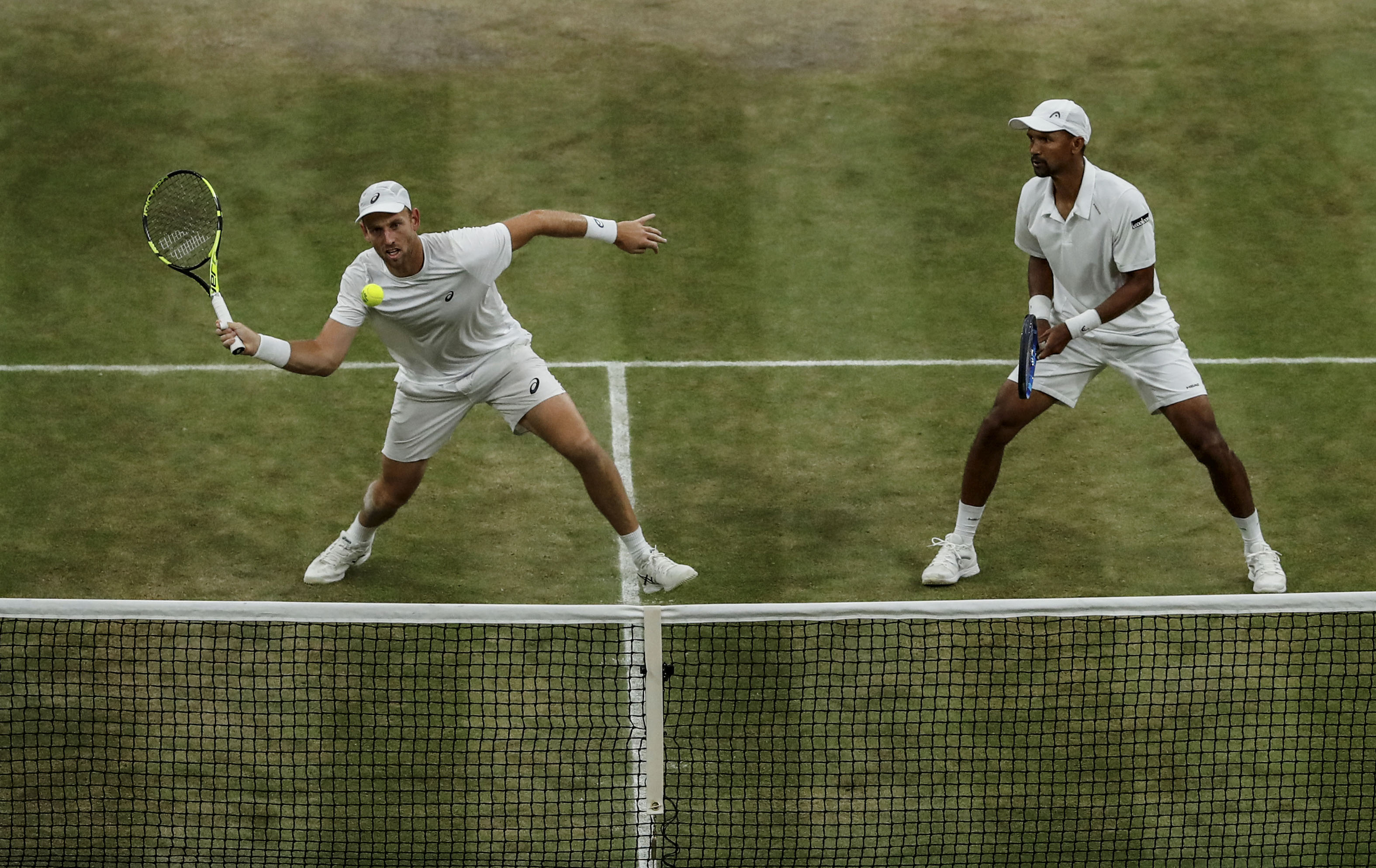 Double trouble: Raven Klaasen and Michael Venus have been in good form ahead of the US Open. (Andrew Boyers/Reuters)

After the encouraging first-round win, Williams will look to gain more confidence with each passing match, but she must keep in mind that she is seeded eighth. On her side of the draw, she has a greater chance of meeting defending champion Osaka, Wimbledon champion Halep or French Open champion Ashleigh Barty earlier than she would prefer.

Despite what’s at stake, her legacy will prevail, but for her own pride and for the sake of countering her trauma from last year, securing her seventh title at Flushing Meadows means more than ever to Williams.

South African representation is extremely limited in the singles draw at this year’s US Open. Kevin Anderson, who is ranked 17th in the world, had to withdraw from the tournament before it began due to a knee injury.

And Lloyd Harris was eliminated on Tuesday, meaning that the country has no other singles players left in New York.

Anthony Moruthane from Tennis South Africa said that it is unfortunate that Harris had to return home so early, but noted that he is a “rising star”. Harris entered the top 100 rankings for the first time in his career this year, after he amassed three ATP Challenger singles titles. In July, he reached his peak in the rankings, being placed 82nd at just 22 years old.

As far as doubles goes, Moruthane is much more hopeful when it comes to South Africa’s doubles specialist, Raven Klaasen.

He believes that Klaasen, together with his partner from New Zealand, Michael Venus, can go all the way in Flushing this year.

“Raven and his partner have been on good form going into the tournament. They have had a terrific few months ahead of the tournament, and we hope to see them in the final this year,” Moruthane said.

Klaasen and Venus will believe that they can conjure up the energy to make a push on the hard court, after an impressive campaign on grass saw them reach the Wimbledon semifinal.

South Africa also have a player in the wheelchair section of the tournament and she will be looking to build on her comprehensive showing last year.

Kgothatso Montjane reached the semifinal of the US Open last year, and Moruthane is certain that she can better her past achievements.