This week’s court appearance of eight men accused of murdering nine residents of Glebelands, has not ended the killings in the massive hostel complex. About 22 000 people live in the hostel, which sprawls across a hill in the south of Durban.

Early last Friday evening Zukile Sokathi, 30, was shot dead and a second resident of the hostel’s Block 54 wounded, against a backdrop of claims that “collections” from residents by extortionists operating in the hostel have begun again ahead of the trial.

The police confirmed the killing, but were unable to comment on whether the shooting was linked to a new wave of collections, as claimed by human rights activist Vanessa Burger this week. The police said the motive would be determined by the ongoing investigation.

According to Burger, the two were shot after residents of the block had refused to pay R80 a person to a group of men, allegedly linked to the accused in the murder case. Burger said she had informed police management about the new collections on August 19, but that nothing had been done to deal with the extortionists, or beef up security at the hostel.

“Money collected in this way has in the past been used to buy guns, hire hit men, kill witnesses and bribe police and magistrates,” Burger said. “Why do the police consistently fail to act immediately when collections are reported to them to prevent and pre-empt these unnecessary and entirely preventable acts of violence?” she said. “Alife has been lost while another man lies critically injured in hospital and the collections continue.” 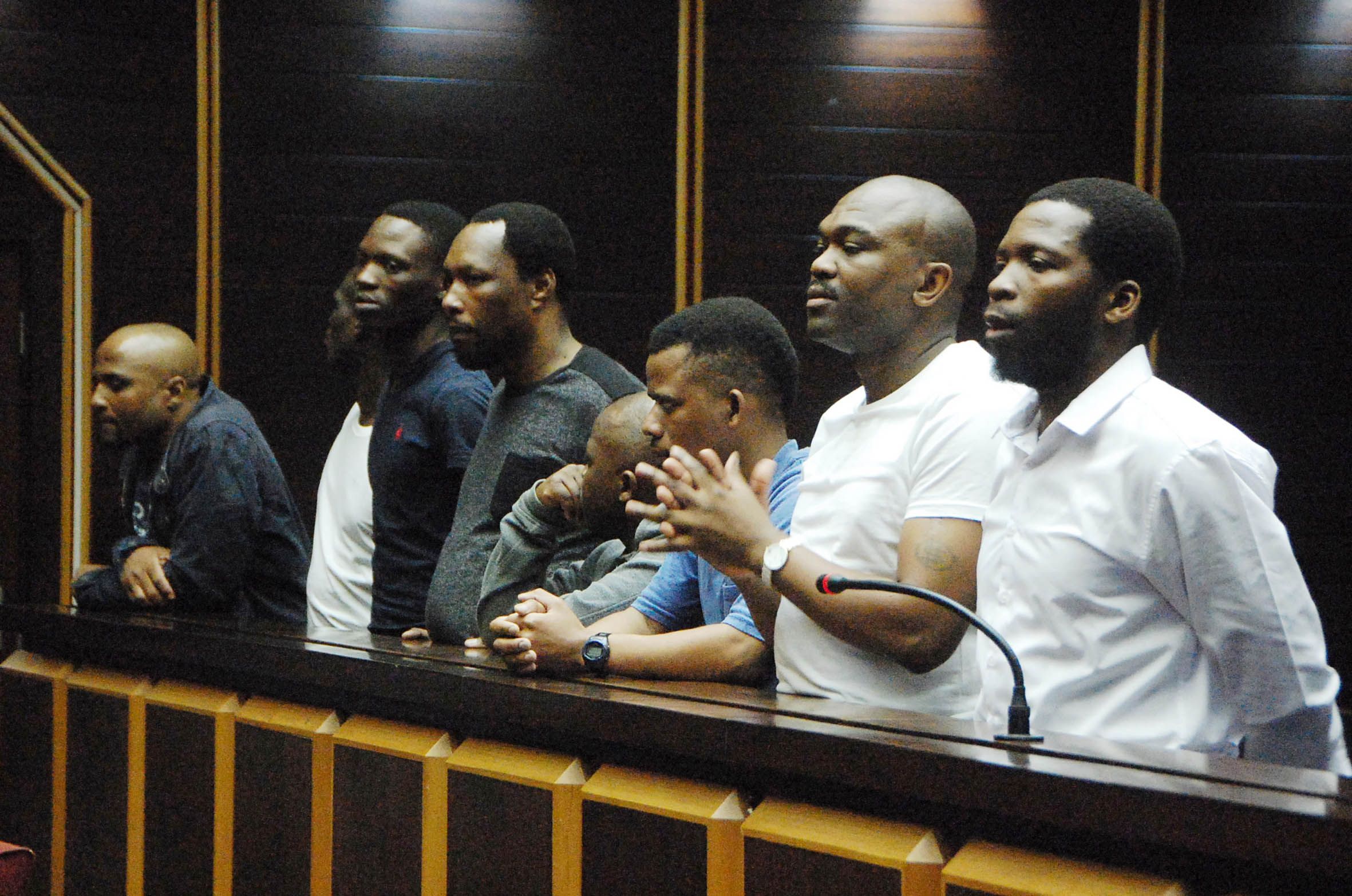 Danger zone: Eight men are on trial in the Pietermaritzburg high court for crimes they allegedly committed. (Phumlani Thabethe)

Burger has asked police management to send reinforcements to Glebelands for the duration of the case.

On Monday, the trial of former detective Bhekuwazi Mdweshu and seven other residents of the hostel charged with nine murders, racketeering and several attempted murders began in the Pietermaritzburg high court.

Mdweshu is charged, along with Khayelihle Mbuthuma, Vukani Mcobothi, Eugene Hlophe, Ncomekile Matlale, Mbuyiselwa Mkhize, Mondli Mthethwa and Bongani Mbhele. Mbuthuma, Mbhele and Mthethwa are all serving sentences for a number of other killings. All eight men have pleaded not guilty to the charges, which stem from a series of murders and attempted murders in the hostel between 2014 and 2016.

According to the indictment, Mdweshu allegedly planned the bulk of the killings carried out by the group, all of whom live in Block 52 of the hostel. Mdweshu, stationed at Durban Central police station, allegedly supplied the automatic weapons and pistols the group used to kill their victims and monitored their movements ahead of their murders.

The group allegedly ran an extortion racket in the hostel, collecting money from residents and business people. According to the indictment, they fought a war with a rival gang operating in the hostel, which they won.

On Tuesday, prosecutor Dorian Paver told the court that he would prove Mdweshu was the leader of the ring of killers and that forensic evidence linked him to the murders and attempted murders.

Mdweshu was arrested in December 2017, after his DNA was linked to blood found on a cooking oil bottle at the scene of one of the shootings, in which several people were wounded, in 2014.

Mdweshu, he said, was wounded in the crossfire and had given his employers and the hospital that treated him different versions of what had happened to him.

Eyewitnesses had also seen him running away from the scene at which the blood was left, Paver said.

On Wednesday, Paver began introducing the forensic evidence, placing a number of police crime scene specialists on the stand to establish that proper procedures had been followed in the collection and preservation of evidence.

Warrant officer Mthokozisi Sishi, a crime scene specialist based at Umlazi, told the court he had been called to Block R by detectives on August 20 2014, after an attempted murder. Sishi said he had collected blood samples from a bottle he found on the grass outside the tuck shop where the victims had been shot and wounded because detectives believed it might have come from the shooters.

Mdweshu’s counsel, Martin Krog, immediately set about challenging the integrity of the forensic evidence against his client.

Krog questioned Sishi’s recollection of events, saying they contradicted the versions of other police officers, who said Sishi had picked up cartridge cases at the shooting scene. Sishi’s version was that the shell casings had already been collected by somebody else — despite the fact that this was a function of forensics, and not him.

Krog questioned why Sishi had only collected a blood sample from the bottle and not from other splatter found in the shack shop where the shooting took place.

Sishi said he had acted on the instructions of the detectives he found on the scene, who told him which samples to take, because this was the usual procedure.

Krog also challenged the crime scene photos themselves, saying that the photo of the bloodstained Sunfoil bottle found behind a white car at the shooting scene “could have been on a field in Johannesburg”.

Krog asked Sishi what had happened to the DNA sample linking Mdweshu to the shootings, which had only been analysed by the police laboratory four years after it was taken.

Sishi also came under fire from Krog over his failure to produce the docket from the incident, which he said he had been unable to find ahead of this week’s court appearance.

Sishi said information which should have been in the crime scene album had been left out “by mistake”.

The trial, which is set down for a month, will continue on Monday.