On August 17, four months after the most sustained protest campaign in Sudan’s modern history swept Omar al-Bashir from power, the Forces of Freedom and Change opposition coalition signed a power-sharing accord with the ruling military junta.

If honoured in full, the deal will pave the way for elections at the close of a three-year period of reforms overseen by a civilian-dominated Cabinet and legislature.

Formidable challenges lie ahead. The generals have held power for three decades and will not share it easily and the new administration will inherit a distressed economy.

To give the transitional authority the best chance at success, external actors, notably the African Union and its partners, should act as guarantors of the agreement. They should help bridge gaps in trust between the parties to ensure that the accord’s timetable stays on track.

The achievements of the Sudanese people are remarkable, not just in ending Bashir’s rule but also in standing up to the junta’s schemes to replace the ousted strongman with a like-minded lieutenant.

Beginning in mid-December, in towns and cities across Sudan, a diverse coalition of protesters drawing in the urban middle classes, farmers and herders, traders, students and a cross-section of professionals, notably doctors, defied repression including the killing of dozens and arbitrary detention of hundreds to demand change.

Women were often at the vanguard of the protests, presenting a pointed challenge to a regime that had long sought to still their voices. The four-day sit-in in April that ultimately persuaded the military to turn against their patron Bashir was stirring as both a display of civil disobedience and a celebration of Sudan’s ethnic, cultural and political diversity.

The protesters underlined the wide civilian support they had at the August 17 ceremony. Ahmed al-Rabia, the man picked to sign the power-sharing agreement on their behalf, is a teacher who supplements his income by driving a taxi at night. Mohamad Nagi al-Asam, a doctor who was detained and tortured in January after he emerged as one of the movement’s early spokesmen, delivered one of the main speeches.

But caution is warranted. The junta signed the agreement under intense external pressure from parties that included the AU, the United States, the United Kingdom and the European Union. Many of its members are beneficiaries of the patronage-based economic system Bashir created. They accumulated vast wealth from controlling sectors such as gold mining and sending thousands of Sudanese to fight as mercenaries in foreign wars. They will be loath to let civilian authorities audit or control these two sources of foreign exchange.

The August 17 agreement is carefully crafted to prevent the military from overriding decisions by other organs, including the prime minister and the Cabinet. The Sovereign Council — whose duties include overall responsibility for defence and foreign affairs — must confirm all the prime minister’s appointments but cannot veto these choices. The prime minister and Cabinet will take effective charge of running the country, including managing the civil service, drawing up the budget and overseeing all state agencies outside the security sector. It will also report to a legislative council, two thirds of which the civilian opposition will appoint. Lieutenant General Abdel Fattah al-Burhan will head the Sovereign Council for the first 21 months of the transition before handing over to a civilian for the next 18 months pending elections. The 11-member council includes six civilians and five soldiers. Prime Minister Abdalla Hamdok is set to form a government later this week.

Despite these safeguards, the generals could stall or block decisions, particularly as they control the armouries and have considerable funds they have already used to buy off opponents.

A further concern is that commanders of insurgencies in Darfur, Blue Nile State and South Kordofan rejected the accord, saying they were insufficiently accommodated in transitional structures. The junta has sought out some of these rebel leaders to cut deals that lie outside the scope of the transitional agreements. Riyadh and Abu Dhabi have also been in touch with some of them, as has Cairo, which hosted some armed group leaders after they rejected the deal endorsed on August 4 in Addis Ababa. The rebels cannot be excluded from the transition. The civilian opposition and security forces should seek an accommodation with the insurgents that signals their intent to break with Sudan’s history of centralised power that neglects and abuses the periphery.

Maintaining the opposition coalition’s cohesion will be tough. Its members are inexperienced, and they were unable to muster a united front in negotiations with the junta until the June 3 massacre galvanised them into action. Opposition leaders should be as inclusive as possible and avoid early own-goals, such as their decisions to include only one woman in their initial list of Sovereign Council nominees and only a handful of women in the Cabinet. The coalition should avoid internal squabbling and keep its eyes on the prize of reform.

The opposition has taken an encouraging first step by tapping an experienced and well-respected economist, Hamdok, as its nominee for prime minister.

The AU, which played a critical role in negotiating the deal, should stay at the helm. Power-sharing pacts often founder when there is no guarantor who can offer an avenue for talks if the parties become deadlocked.

The AU should also appoint a special envoy and expand its liaison office in Khartoum. The UN can channel technical backing to the office-holder who should be someone with a background in macro-economic management. The joint AU-Ethiopian mediation team helped broker the deal but a more permanent arrangement will be necessary to help the transitional administration. The proposed envoy should report to the chair of the AU and provide regular briefings to its peace and security council, which ought to monitor the agreement’s implementation. The council should not lift its June 6 decision to suspend Sudan’s AU membership until the country’s new administration is fully operational.

The Cabinet and the generals will also need to seize the opportunity to end Sudan’s long-running insurgencies. As a first step, the transitional government and rebel groups could observe a six-month ceasefire allowing all parties — perhaps with the support of others such as the AU — to address the roots of the insurgencies, including the concentration of power and resources in Sudan’s wealthier centre.

External partners, including the US, EU and international financial institutions, could assist the civilian-led transitional authority’s efforts to jump-start the economy. They should co-ordinate their work with Gulf countries, notably Saudi Arabia and the United Arab Emirates (UAE), which have sent significant financial support to transitional authorities already.

The US, which enjoys relations with the Sudanese, their key Gulf backers and Egypt, can play a leading role in co-ordinating aid and ensuring that special interests do not capture or compromise financial assistance. Washington should demand that all funding be channelled through the central bank. The US also has the leverage of tying Sudan’s progress toward civilian rule to its designation as a state sponsor of terrorism, which Washington could eventually lift. The US should demand reforms to public sector financing and lean on Saudi Arabia and the UAE to end the practice of sending funds directly to their clients in the security sector. 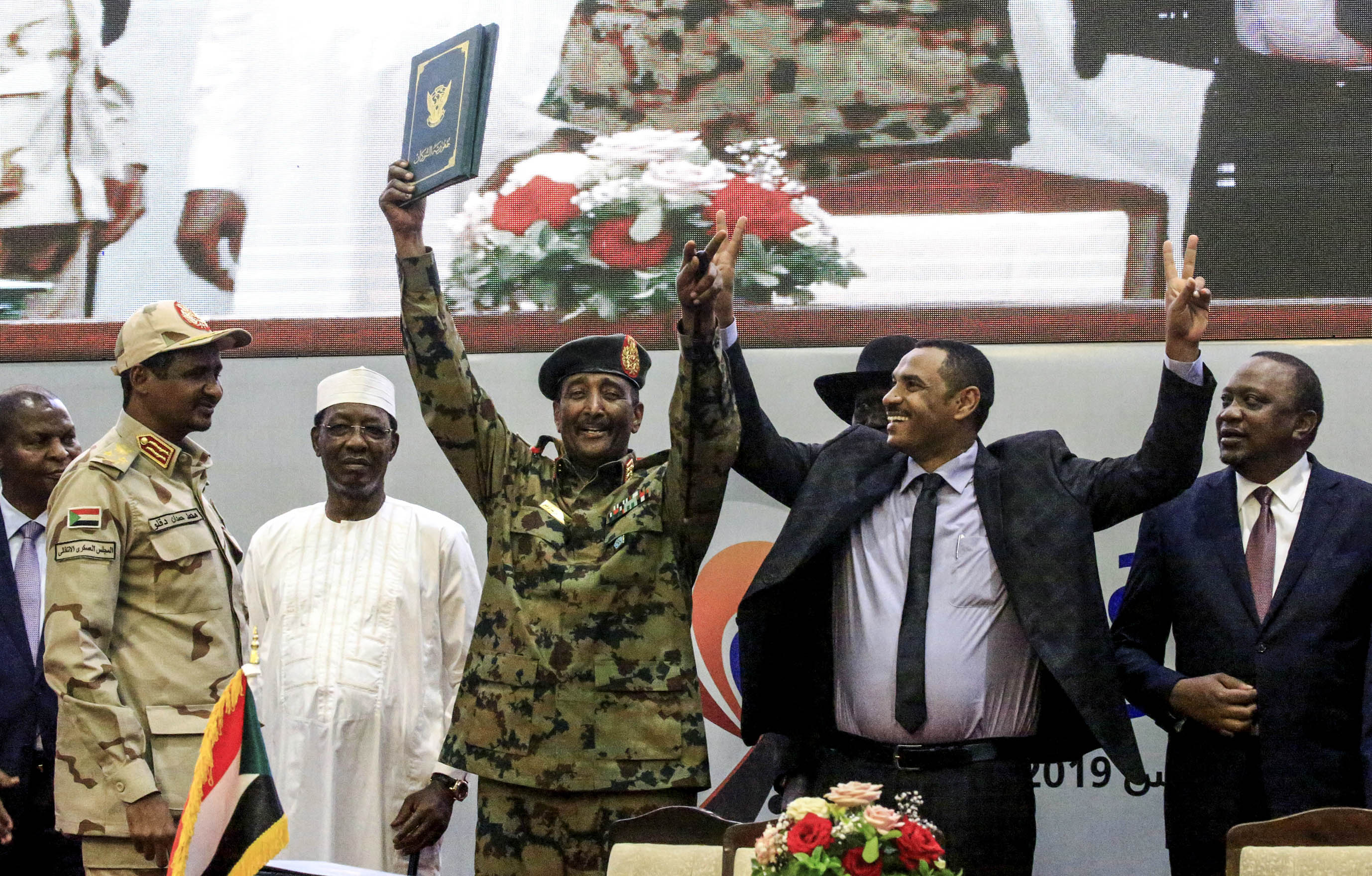 The funds raised could then be managed and disbursed jointly, perhaps under the auspices of the UN Development Programme. The country needs reforms championed internally and supported externally, including debt relief. Partners should stagger the resumption of financial assistance to accompany various phases of the accord’s implementation, including the formation of a legislative council, expected by the end of November.

It was the Sudanese people who brought the country to this moment of great hope mingled with anxiety, and ultimately, the task of consolidating the gains of Sudan’s revolution will fall to them. Sudan’s citizens have shown that they will not accept superficial change. They are the arbiters of their country’s future but they deserve all the support they can get from Sudan’s friends.

Sudan’s military junta and civilian opposition have agreed to form an administration to steer a transition toward free and fair elections. But the generals signed only under pressure. All Sudanese — and outside partners — will need to remain vigilant lest they try to restore autocracy