What does ‘fourth industrial revolution’ even mean?

Over the past three years, very excited politicians have used every opportunity to talk about 4IR as the next phase of South Africa’s development. But few of them — or us — seem to have a firm grasp of what it is. The M&G Data Desk has spoken to experts, a telecoms company experimenting with educational tech, and even one of the creators of the term, to find out what 4IR really, actually, probably means

The 4IR disrupts systems and our very sense of self

In 2015, Nicholas Davis and Klaus Schwab started talking about the increasing frenzy around technological disruption. Their conversation would turn into a book — Shaping the Fourth Industrial Revolution — and a global dialogue. The Mail & Guardian spoke to Davis about their process, and what he thinks 4IR means for South Africa.

How was the phrase coined?

In the summer of 2015, Klaus called me to his office and said he has been talking to global leaders in companies and politicians, and every­one has been talking about technology and innovation, but they were looking at it from a silo perspective. His pitch to me was that we should write a book. Over the course of that summer, we published one of the first articles on this topic. The fourth industrial revolution is actually like a different stage of human development. If we talk about it and work on it together at the beginning of the revolution, maybe we will avoid the mistakes made in previous revolutions, which resulted in massive exclusion and human rights violations, environmental damage and regulatory lag.

How was the book published so quickly?

It was interesting because when we wrote the book, we approached a bunch of really great global publishing houses. Everyone was like, “Oh, absolutely, we’d love to publish this book.” We said: “So when can you publish it?” And they were like, “Oh, no problem, in a year’s time.” And we were like, “No.”

This is a book about how fast technology is changing — we can’t wait a year to get this stuff out. We self-published and I taught myself how to use Amazon self-publishing tools, and we did print on demand. Random House did publish both books, but six to nine months later. We wanted to demonstrate the power and the ways systems and industries were being disrupted.

What is the distinction between the third and fourth revolutions?

The key distinction is looking at it from a systems level rather than an individual technology level.

One hallmark of this is essentially the uberisation, if you will, or the on-demand nature, that becomes available to you in many other parts of our life, because you have now offloaded the decision-making to algorithms.

Humans are letting algorithms make a lot of decisions: what happens to our autonomy as this continues? 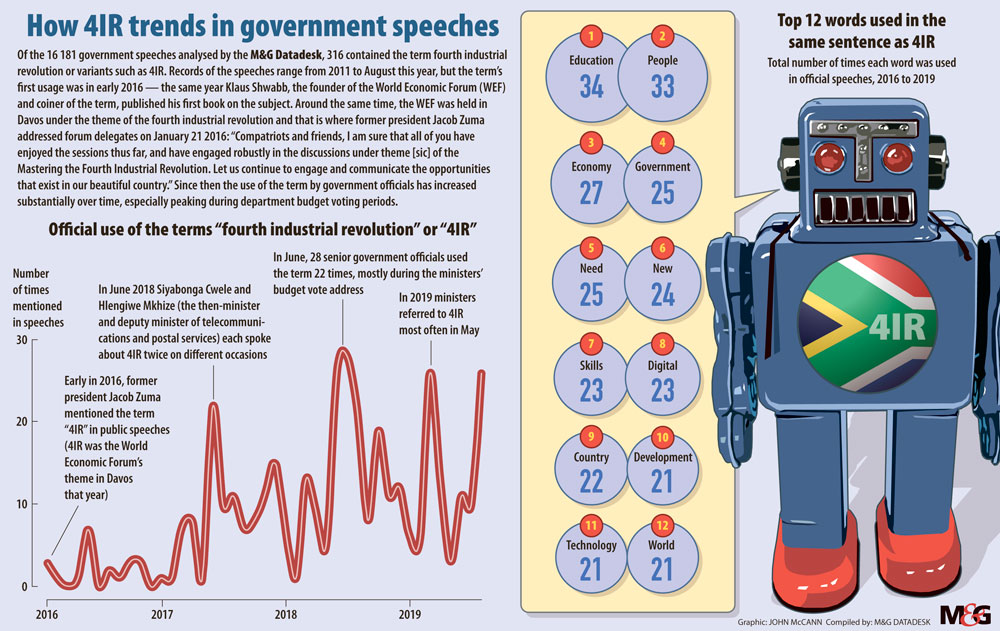 We’ve made this assumption in society that we as individuals hold a lot of really important decision-making power over our own lives at every point in time. We do have to pay tax and, you know, obey road rules and everything, but we still see ourselves as pretty self-determinant, wandering around with a lot of freedom. I think there is a potential shift here, which will challenge us as we become aware that devices and algorithms are influencing our behaviour. It’s not a government bureaucrat making decisions about us any more — it’s a computer system and that’s going to threaten us a little bit as human beings. You could say, well, the revolution might be the loss of a sense of agency.

An example of that is if you work as a delivery driver, you’re no longer responding to the dispatch voice of someone who is on the other end of the radio by saying, “I can’t take that job, I’m too far out.”

You either accept the job or you don’t on the app. There’s no one to negotiate with and more and more computer systems are making decisions and you don’t know the reasons why that’s happening. And I think that’s a revolution in itself that we will have to deal with.

Where does South Africa fit in?

The South African government needs to focus on looking first at the needs of citizens, rather than saying, “Here are some shiny, bright new objects that we can put into play.” It needs to ask: “What are the perennial issues that we have that this revolution and these technologies might open up new solutions and more efficient solutions for?”

The second thing is setting the framework for the use of artificial intelligence in the economy, which gives certainty to entrepreneurs about how they can operate. It gives them the space to do so. Also, work hard on public data sets to ensure that when people are developing applications or services that rely on artificial intelligence, data is readily available.

Matric by way of the matrix?

A bright blue container in the middle of Tembisa on the East Rand is a seemingly unlikely place to find an example of the fourth industrial revolution. Inside is a group of children wearing large, grey goggles. They’re experimenting with how 4IR can work.

The container was put in place earlier this year by Nokia South Africa as a test case for a “virtual-reality-enabled remote classroom”. There are no teachers in the container, just children with notepads and virtual reality headsets into which a teacher is beamed.

Speaking on behalf of the Nokia project, Victor Swanepoel says the children quickly got hooked on learning this way. “When we first tested this, the students felt it was something new they were not used to. But once they got into it, three hours later they still did not want to leave the classroom,” he said. 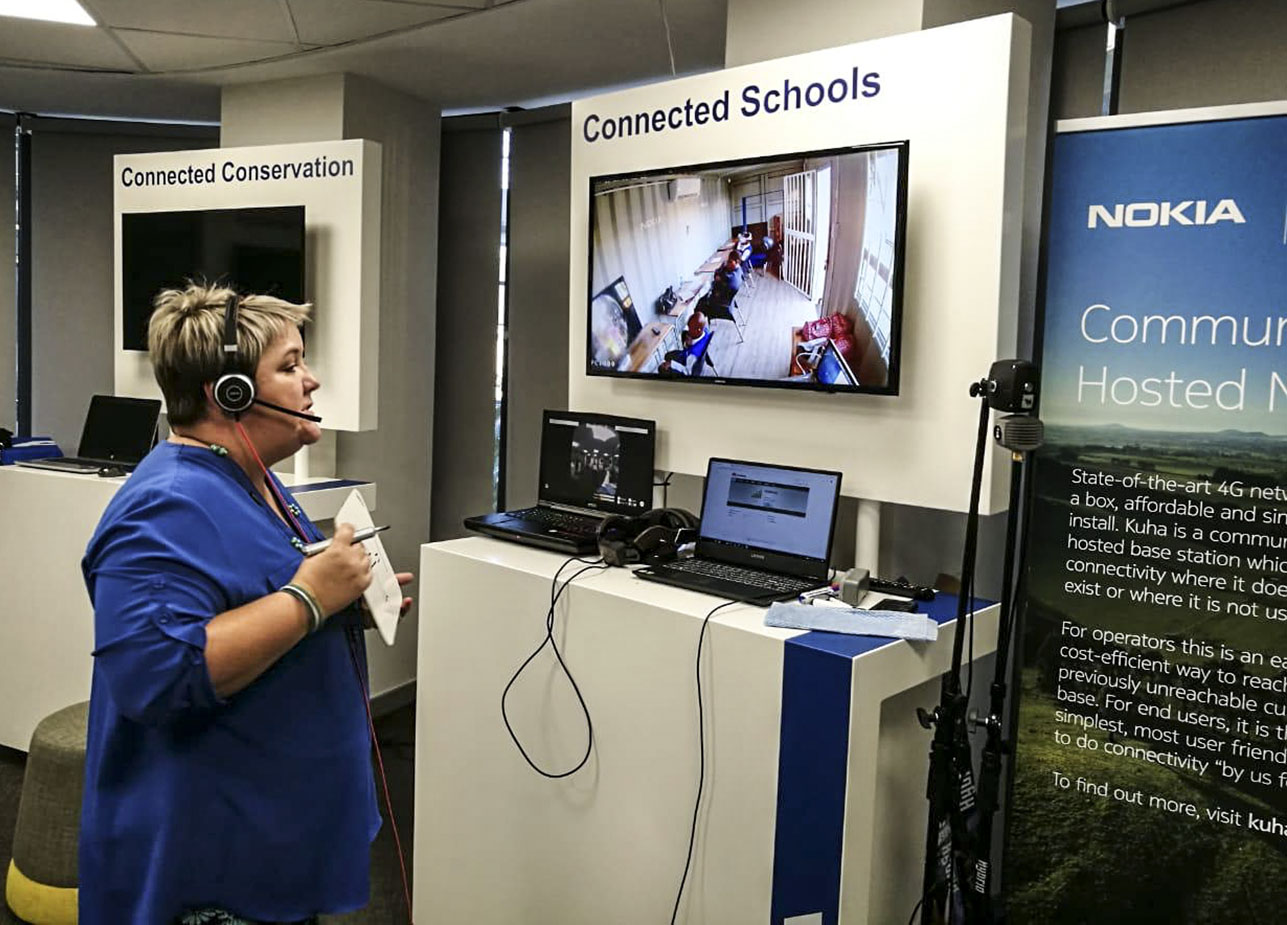 A teacher somewhere else in the world can supervise what learners are doing.

Thanks to virtual reality, subjects as abstract as maths are made more tangible. In a lesson about fractions, five apples are divided between two people. In a biology lesson, children look at a body that has been stripped to a skeleton with just the heart and blood veins. This allows them to see how the capillaries and veins work.

With headsets now costing only about R2  000, the simplicity of the system means possibilities are endless — any classroom can be kitted out with headsets, a TV screen and a camera for the teacher to see the learners. 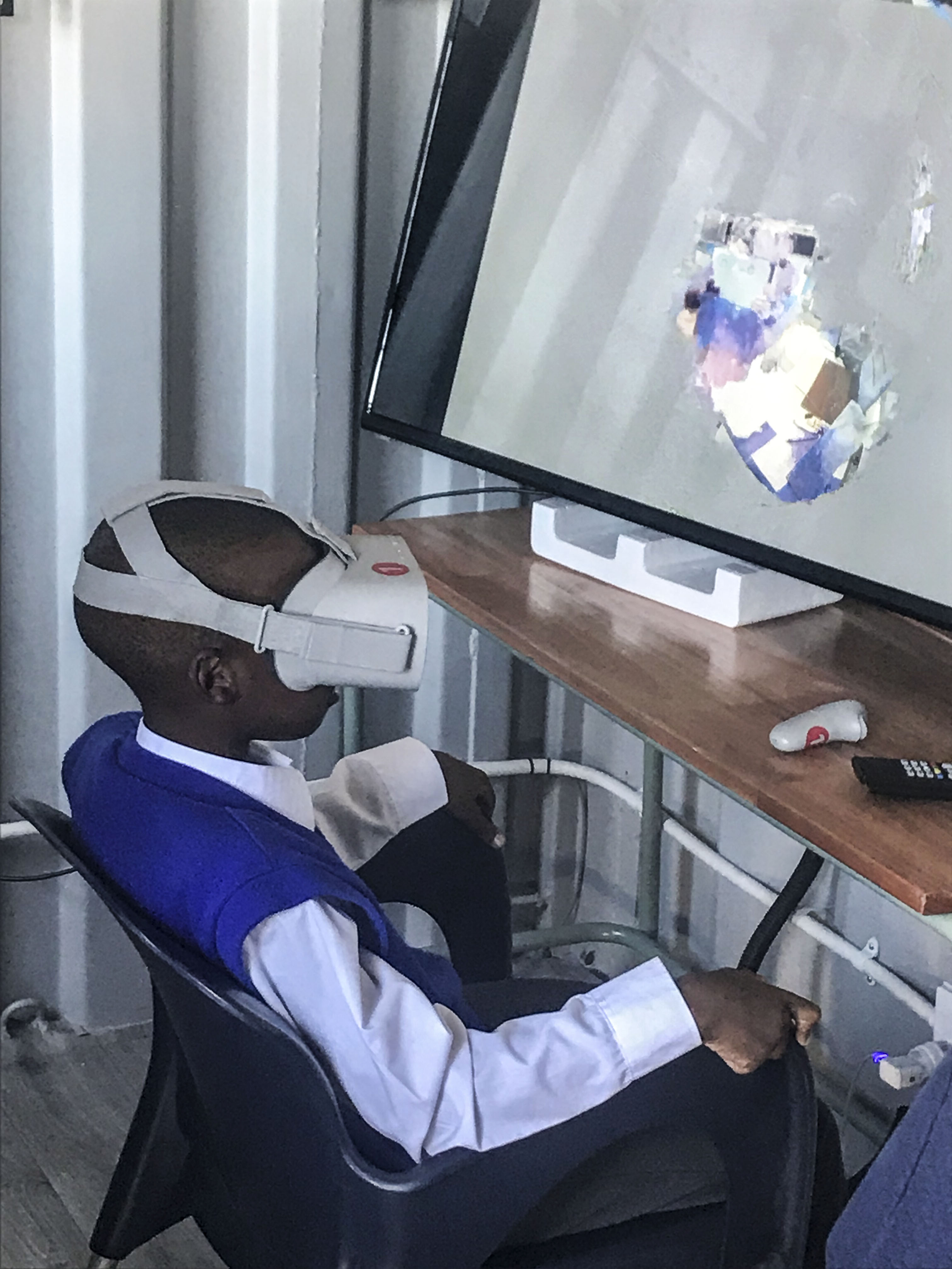 A child tries out using virtual reality, where learning materials are seen through a headset.

With these requirements met — and with a decent internet connection — pupils in places without teachers, or with poor infrastructure, can receive an education. Swanepoel says this means that, for example, children in a rural Eastern Cape school without a science laboratory can put on their headsets and go through a lesson in a fully-equipped laboratory, with a fully trained science teacher.

Although the container is only a test case in how 4IR can work, it is showing how technology that we already have can help to solve the problems that make learning difficult.

There is usually resistance to change, and it was no different at the onset of the first industrial revolution, which occurred from about 1760 to 1830. Then, a group of textile workers smashed the machines that were taking their jobs — one of them, Ned Ludd, would give his name to technology-averse Luddites.

“The first country to industrialise, by using machines for productions and other activities, was the United Kingdom,” says Tshilidzi Marwala, the vice-chancellor and principal of the University of Johannesburg.

“Part of the reason England was the first country to industrialise was because of the scientific revolution that happened just before the Industrial Revolution, which gave us the understanding of science in a much more precise manner.”

Marwala explains that the laws of motion and heat were the catalysts of this revolution. It meant that making machines that could move was possible. The steam engine was one of the products of the revolution, he says.

The second industrial revolution, in about 1870, created electricity. This brought together magnetic and electrical forces.

Marwala says: “If you put something that conducts electricity next to a magnet and move it, electricity is generated.”

Today, 90% of the electricity used in South Africa is made this way.

Put together, the first and second revolutions allowed for the mass production of goods and services. But, says Marwala, “today in South Africa we are struggling with the security of the supply of electricity, the technology of the second revolution”.

The third revolution came in the 1960s with digital communication.

Marwala says communicating in ones and zeros is an old technology — this is how telegrams work.

“What computers did was to automate the process.” But, even though we’re decades into this revolution, there isn’t a single fully operational semiconductor company on the African continent, making phones, computers or television sets.

Marwala says: “We can assemble them but we don’t make them. The third industrial revolution is the electronic age which did not really take root on the African continent.”

This latest, fourth, revolution is a problem for countries that already struggle with high unemployment.

Marwala says: “Simply put, things that once required lots of people to get done no longer require those people because machines can do these, whether it’s in call centres, Mercedes-Benz or coal mines.”

But he does say that countries with educated populations can gain hugely from 4IR.

“When the third [revolution] was happening the majority of Africa was still colonised. If you look at the literacy rates as well, they were quite poor.

“Today the literacy rates are at an all-time high. So we are more ready for the fourth industrial revolution than we were for the others,” Marwala says.

“But we are not adequately ready to play a meaningful role on a scale at which we can be economically competitive.” 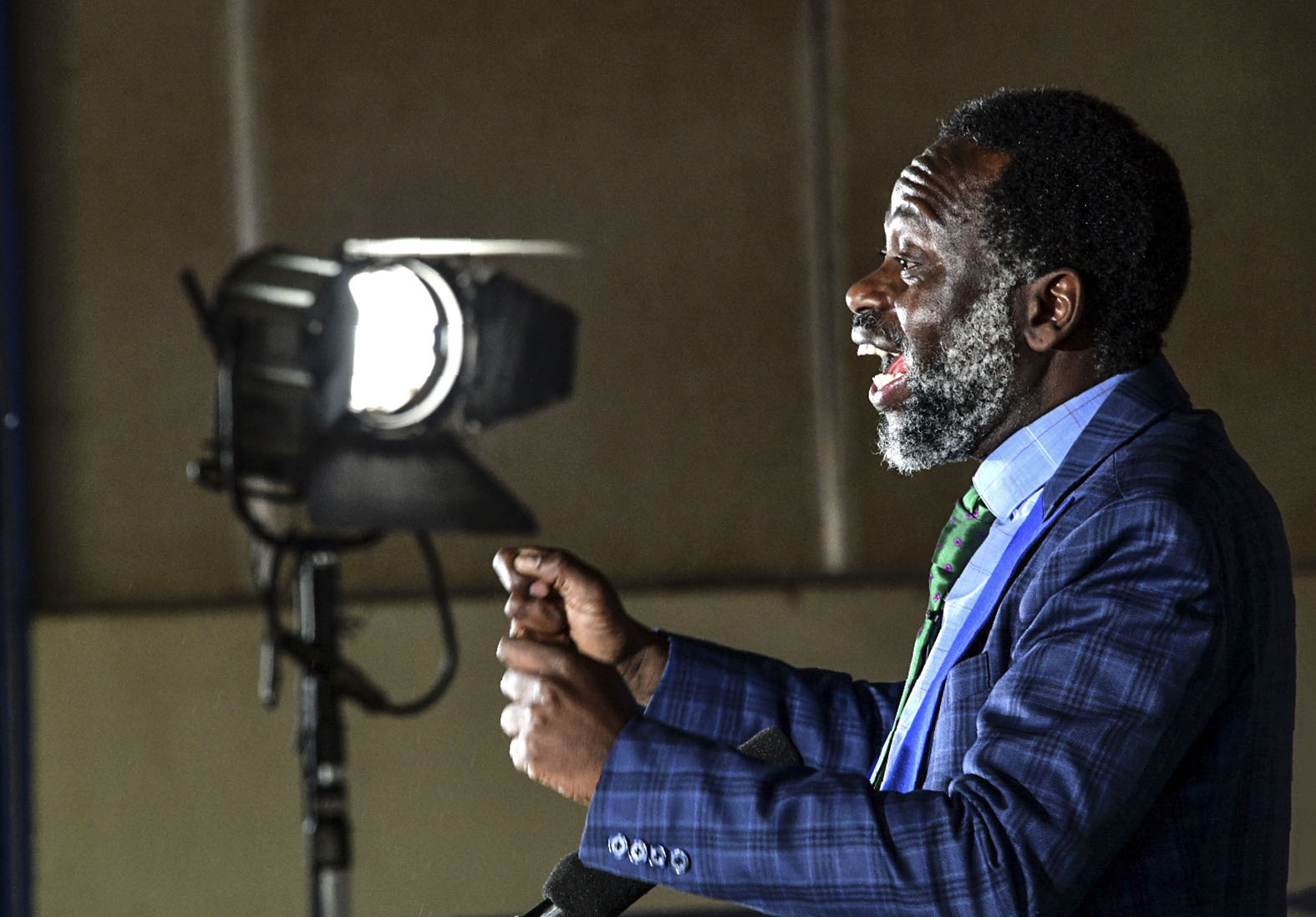