Central African Republic: The parable of the 11 stolen motorcycles 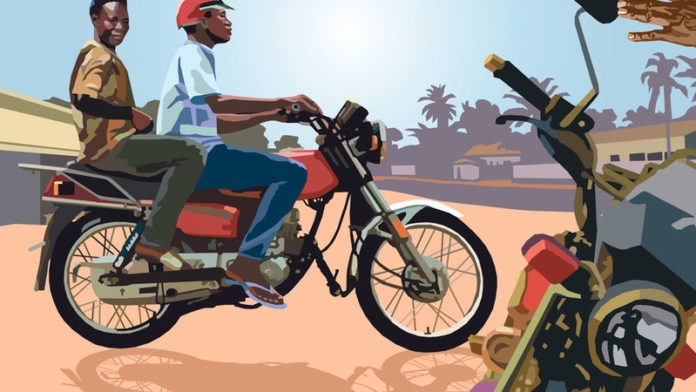 In 2015, in a vicious round of riots in the capital of the Central African Republic (CAR), Sylvestre Dothe’s house was burned to the ground. He lost all his possessions but managed to escape with his wife and children, fleeing into neighbouring Cameroon for several months before returning home and starting from scratch.

He had a plan to get back on his feet. For three years he traded trinkets in the market, saving everything he could until he had the 500 000 CFA francs (about R12 400) he needed to buy himself a new motorcycle.
It was a blue TSV, imported from India, and it was his pride and joy — and his economic liberation.

He bought the motorcycle on August 1 last year, and hired a driver to operate it as a moto-taxi. For five days, the arrangement worked flawlessly. Then, on the morning of August 6, on the edge of the city’s Muslim quarter, the driver was stabbed in the thigh and the motorcycle was stolen.

When fighting broke out in the CAR in 2013, it devolved along sectarian lines, and the Muslim minority found itself persecuted. Many fled. Those who stayed protected themselves by retreating into Muslim-only areas. In Bangui, this de facto ghetto is known as Point Kilometre Cinq, or PK5. The border is permeable, and there is some movement between it and the rest of the city, which is predominantly Christian, but the threat of violence is ever-present.

Two years later, when Dothe’s motorcycle was stolen, he rushed to the border of PK5. He spoke to vendors on the street, who confirmed that a motorcycle had been stolen and that a driver had been injured. Crushed, panicked, he told his friends and family what had happened. Word spread.

Without his knowledge, or his consent, a group of Christian youths decided to take revenge. Several hours later, they proudly told him that they had stolen five motorcycles from Muslim owners in retaliation. They planned to sell these and buy Dothe another brand-new motorcycle, and split any profits among themselves.

Dothe was horrified. He had seen this scenario play out before: a spiral of revenge that would end in a death or many deaths, because relations between Christians and Muslims were on a knife-edge and could explode at any moment.

Angrily, he demanded that the youths return the stolen motorcycles to the PK5 moto-taxi association. They reluctantly complied.

The president of the PK5 motor-taxi association met Dothe that evening. He was very apologetic, and grateful that Dothe had returned the other motorcycles. And he had some information: the thief who stole Dothe’s motorcycle had been identified. His name was Soulé, and he was a good man. His motorbike had been stolen the day before that and so when he stole Dothe’s motorcycle he was simply exacting his own revenge.

They even knew the identity of the thief who had stolen Soulé’s motorcycle — and, sure enough, that thief had had his motorcycle stolen just hours before that.

At this point, Dothe began to despair. This was the spiral of revenge that he had been so worried about. Determined to prevent further violence, he decided to approach the police to see whether they could intervene. The police referred him to the national prosecutor. The national prosecutor said he could not open a case without a lawyer — and a lawyer cost almost as much as a brand new motorcycle. It was money that Dothe simply didn’t have.

Dothe’s friends did not understand why he was bothering. “We can get you a new motorcycle this afternoon,” they said. “We just take one from the people who took yours from you. That’s how things work around here.”

Dothe refused. What is the point of having rules if nobody follows them, he wondered.

Giving up on official channels, Dothe asked the presidents of the two moto-taxi associations to meet. They were both sympathetic, and agreed to the meeting, but they warned that the issue was beginning to cause tensions in the Christian and Muslim communities. People were getting angry, and were threatening to take matters into their own hands. This was exactly the kind of issue that had led to flare-ups of violence in the past.

Dothe said he understood. He didn’t want any violence, he just wanted to his motorcycle back.

But the moto-taxi president from the Muslim quarter had bad news: Dothe’s beautiful brand-new TVS had been sold already. Instead, as a compromise, he said that Dothe could take the motorcycle that belonged to Soulé. Dothe was not happy: this motorcycle was old and battered, and would require a lot of maintenance.

As they were meeting, news filtered in that Christian youths from Dothe’s quarter had once again let their frustrations get the better of them, and had stolen another three motorcycles from Muslim drivers.

The mood in the room soured. The latest thefts represented a provocation. Apologetically, the president of the moto-taxi association in his own district, the Fifth Arrondissement, promised that the three latest stolen motorcycles would be returned.

And then everyone looked at Dothe. Would he accept the compromise of the second-hand motorbike, and put an end to the tit-for-tat thefts?

He took a night to think about it. He found himself in a moral dilemma. He wanted justice for himself, and he really wanted his nice new motorcycle back. He was angry that his government and his community had let him down, yet again. But he also knew that unless someone put an end to it, this cycle of violence could continue ad infinitum, and that he would then be implicated if anyone else got hurt.

The next day, Dothe took possession of Soulé’s ugly old motorcycle. It was not the justice he wanted, or deserved. But at least he still owned a motorcycle, and no one else was going to get hurt.