The Rugby World Cup brings the possibility of upsets, unforeseeable circumstances and the teeth-grinding vexation of controversy. It also brings contenders to a table that has often allowed only the Springboks, the All Blacks and the Wallabies as diners. The Mail & Guardian takes a look at the top contenders from the North — plus Los Pumas, who are always good for an upset — and weighs up who will pillage the three teams from the southern hemisphere in Japan.

Welcome to the Eddie Jones show. The Australian took over after England had put in a disastrous showing at the last World Cup, in which they failed to exit the pool stages. In the time since, he has moulded and shaped the team into perhaps the most formidable outfit outside the southern hemisphere.

Sure, there have been some icky bits along the way — namely last year — but the team that have flown to Japan look capable of beating anyone. With the exception of the All Blacks, there’s not a major scalp they haven’t added in the last few months. Pre-tournament warm-ups also included a 57-15 walloping of No 1 ranked Ireland, which will boost confidence ahead of their opener.

This is the culmination of Jones’s long term masterplan. Along the way he has pushed players into posts they might have initially felt uncomfortable with, but now the broth is primed to thicken. A successful end in October will be characteristic of the man whose CV is laced with World Cup pedigree: he was a last-minute Jonny Wilkinson drop goal away from winning it in 2003, was on the South African bench for the 2007 success and beat the Boks with Japan in 2015.

In singling out an English player, it’s tempting to go with someone from the fierce pack. No one will have any illusions that they’ve been in a battle after tussling with the young bruisers. Maro Itoje and 21-year-old Tom Curry, in particular, are two players you would not want to see bearing down on you.

It’s Owen Farrell, however, who will be key in putting the various jigsaw pieces into place. He’s likely to be deployed at inside-centre, with George Ford at No 10, ensuring Jones will have an incredibly creative duet at his disposal who just both happen to also have an excellent kicking game.

Absolutely. Are they favourites? Not quite.

As good as this team has become, they’re yet to exhibit the same kind of dominance that the All Blacks have over the past decade. Indeed they’ve barely met the world champions during Jones’s tenure — playing and losing once — so we can’t draw on a precedent for what some might see as an inevitable meeting.

The Pumas have not tasted victory in international rugby since September 2018 when they beat an Aussie outfit in Queensland. They also land in Japan ranked 11th in the world but, according to coach Mario Ledesma they have “prepared to win the tournament”.

Argentina have pulled 26 of their 31-man squad from the Jaguares, who reached the Super Rugby final for the first time this year. The Jaguares ousted teams from around South Africa, New Zealand and Australia on their way to a final against the Crusaders, but ultimately fell short.

One man who does not form part of that Jaguares set up, but seems to be the key to Argentina’s push for glory is flyhalf Nicolás Sánchez. The Pumas playmaker provides a classy balance between his running and kicking game.

He certainly showed ingenuity at the previous World Cup in 2015, in which he finished the tournament as the top points scorer with 97. This performance ultimately served as a platform for his country to record a fourth-place finish.

It was proven that Argentina can rattle any country on their day in 2015 but their recent form, which shows three losses, suggests an air of unpredictability around the Pumas this time. However, if they can reign victorious over England and France in their pool, we may know if this Jaguares team in disguise is ready to hold the William Webb Ellis Cup.

Warren Gatland’s Wales stormed through the Six Nations comfortably, but they haven’t quite cemented themselves among the favourites. A 19-10 loss to Ireland in a warm-up match has allowed questions to linger over their mindset.

Their vulnerabilities, such as their limited options at scrumhalf, are overshadowed by the fitness of the team. The fire they produce in the last quarter of the game, as they displayed in the Six Nations, make them a force that can take advantage of tired opponents in that spell.

In-form flyhalf Gareth Anscombe did not make the flight to Japan because of injury but the new Welsh No 10, Jarrod Evans, is certainly vigorous, ambitious and — occasionally — outrageous. He’s not afraid of a quick trick or cute shimmy, and brings pace and skilful attributes to the side. At just 23 years old and under the guidance of the talismanic skipper Alun Wyn Jones, Evans’s youth and fearless attitude may just be what lead the Welsh challenge in Japan. 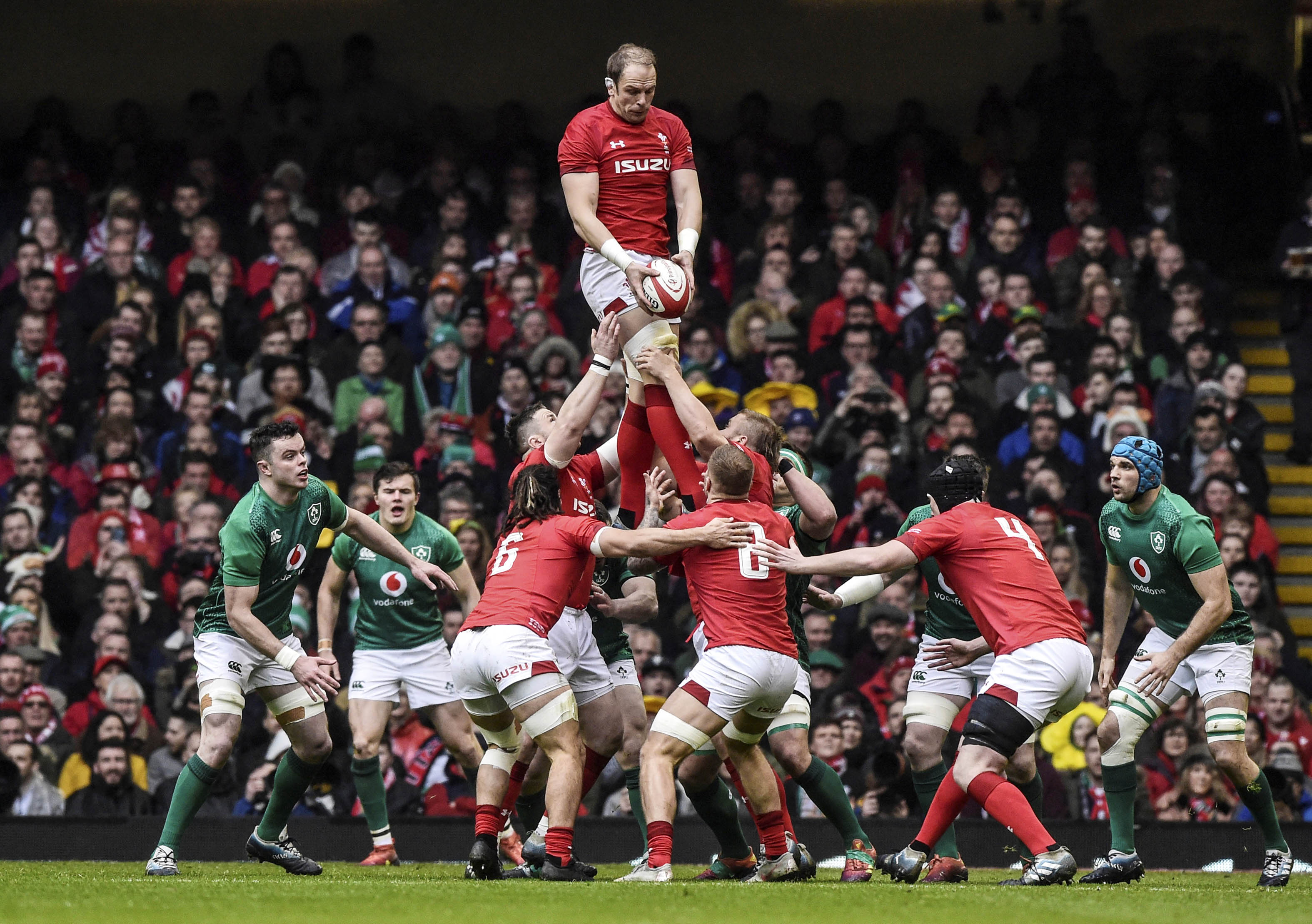 Top of the world: Wales’s Alun Wyn Jones in action in the Six Nations final this year. The Dragons won the championship, but their road to the World Cup final will be tough. (Rebecca Naden/Reuters)

The Welsh are the favourites to top their pool and will base the foundation of their challenge on the brute force on which their defence has been built since Gatland took over in 2008. But Gatland’s poor form against southern hemisphere teams will haunt Wales as they are almost guaranteed to face the Springboks or All Blacks on the road to the final.

Ireland have played in all eight World Cups. They’ve made it to the quarterfinals in all but two of those. Yet never have they run onto the field for a semifinal.

Now that they are ranked No 1 in the world, the pressure is on the Irish to break out of that Sisyphean cycle.

There’s good reason to believe that they could too. Joe Schmidt’s side clawed their way to the pinnacle of the rankings by relentlessly grinding down previous incumbent Wales in a warm-up match. It’s not pretty to watch but this team thrives amid the drudgery like few others in the sport.

There’s also good reason to believe that they can’t. A couple of crucial losses have put the pluck of the Irish into doubt, none more so than the 57-15 pummelling at Twickenham last month against England.

As much as Schmidt has surely enjoyed the ascent up the capricious standings, it will also be hard for him not to admit that his team has regressed slightly. Last year marked an incredible period for the Irish and saw them sweep aside almost everybody they faced. A domineering win over the All Blacks in November capped off a run of form that the New Zealand-born coach probably wishes he had going into this weekend.

It’s no coincidence that James Ryan was missing from the England thrashing. The line-out is a different beast when he’s manning it and his tackles invariably improve Ireland’s defensive game. His assured carries are equally fundamental to Ireland’s strategy of slowly wearing down the opposition.

We would also be remiss not to mention that the Irish have the reigning world player of the year in their squad. At 34, Johnny Sexton continues to distinguish himself as an exceptional flyhalf and has been integral to much of the success his side have enjoyed recently.

Only once before, in 2007, has a nation ranked No 1 going into the World Cup not gone on to win it. That year South Africa emerged as champions and, incidentally, it will be them or the All Blacks that the Irish face first in the knockout stages.

It all comes back to their quarterfinal hoodoo. Break it by beating one of the pre-tournament favourites and it will be hard to bet against them grinding out a win in their maiden semifinal.