Landing in Equatorial Guinea’s capital of Malabo, a short drive from the airport brings any road user onto an impeccable six-lane asphalt highway. Driving further, the visitor is stunned to see gleaming tower blocks, rows of government housing, a state-of-the-art hospital and a giant conference centre.

Striking oil in the mid-1990s, Equatorial Guinea’s gross domestic product per capita catapulted to a record high of $20 512 in 2008, according to Trading Economics, and remains the highest in Africa.

The government, led by Teodoro Obiang Nguema Mbasogo, who violently seized power in 1979 and is the world’s longest-serving president, claims the great wealth of the country has been put to the benefit of its 1.2-million citizens. The infrastructure, it says, is evidence of this fact.

“The president is 77 years old,” Prime Minister Francisco Asue tells journalists on the sidelines of the African Development Bank’s 54th annual meetings held in June in Malabo. “He will not benefit from the infrastructure; it’s not for himself. It’s for the next generation and for the everyday citizen.”

Critics, however, argue the government has mismanaged its oil wealth, neglecting key social sectors such as education and health while spending heavily on lavish infrastructure projects whose beneficiaries are construction companies in the president’s ruling clique.

Vice-president Teodorin Nguema Obiang Mangue, one of the president’s sons, reportedly makes some of his wealth through a construction company called Abayak, which has a monopoly on cement.

Teodorin is constantly in the press for brazenly flaunting his lavish lifestyle and for numerous corruption charges. In October last year, a French court found him guilty in absentia of embezzling tens of millions of euros from Equatorial Guinea and laundering the money in France. The court seized $120-million worth of assets and handed down a three-year suspended prison sentence and a $35-million fine.

Sarah Saadoun, a researcher at Human Rights Watch, says the squandering of oil wealth is so brazen it’s “in your face” and made all the more deplorable when compared to the plight of the average citizen.

“In the meantime, residential areas in the capital don’t have roads,” she says. “The school enrolment rate is at the level of Sudan or Libya; [there are] areas of serious conflict [and] the vaccination rate is literally the worst in the world.”

Alongside construction in Malabo, which is on the island of Bioko opposite Cameroon, the government is keen to show off infrastructure development on Equatorial Guinea’s mainland next to Gabon. Cutting thick into the forest, the government has spent millions building a new capital officially named Ciudad de la Paz, but otherwise referred to as Oyala.

As the only Spanish-speaking country in Africa, the government has built a basilica on the outskirts of Oyala which looks as though it was airlifted from a town in southern Spain.

The Universidad Americana del Africa Central, a sprawling campus in the new capital, is expected to welcome its first students this month and is hoped by the government to serve the surrounding Central African region.

The Grand Hotel Djibloho, one of the only hotels in the sparsely populated region, began construction in 2008 and now boast 442 rooms and 50 villas covering 120 000m2. It comes complete with a nightclub, swimming pool, state-of-the-art gym and an Italian restaurant. A single night costs $170. At an initial cost of €350-million, paid for by the government, the hotel is a sinkhole for public funds at an occupancy rate of 5% with 270 staff employed.

Though the government insists these investments will benefit the average person, Saadoun says they are “prestige projects” designed as a public relations push to sell the country to the outside world.

“The way they choose to invest their income and the kinds of infrastructure projects they choose are not ones which are aligned with the needs of their people,” she says.

Attracting foreign capital through prestige projects is a key strategy for Equatorial Guinea after its oil-dependent economy tanked in 2014 when commodity prices dropped.

“Equatorial Guinea is nothing but oil,” says Gabriel Lima, the minister of mines, industry and energy. “The effect of the crash was catastrophic. You’re talking about oil price dropping 50% overnight. Our budget was according to $100 or $90 per barrel and when you have that drop going all the way to $50 or $40 we suffered.”

Lima, another of Obiang’s sons, although from a different mother to Teodorin, says government spending on infrastructure has ground to a halt since the crash and oil production has suffered as a consequence.

The minister, who is another possible replacement for the president, which may lead to conflict with Teodorin, is on a roadshow to the United Kingdom and China in an attempt to auction off 14 oil and gas blocks. Lima says the current potential is about seven billion barrels and counters the claim that Equatorial Guinea’s reserves are running dry.

Infrastructure and stability, in stark contrast to neighbouring Cameroon and Nigeria, are two key selling points to international oil companies looking to carve a slice of the oil wealth.

With little other private sector activity in Equatorial Guinea, these companies act as key enablers of a regime that has been widely accused of human rights abuses.

Tutu Alicante, executive director of EG Justice, a nongovernmental organisation that promotes human rights in Equatorial Guinea, has accused the United States’s former secretary of state, Rex Tillerson, of propping up Obiang’s regime during his time as the boss of America’s largest oil company, Exxon Mobil.

According to Alicante, the oil major helped overturn an election that almost ousted Obiang in 1995 after discovering a huge oil field in the same year.

Now the economy has contracted, the government claims to have diversified into areas such as fishing, tourism and agriculture. But, hard evidence of serious investment in key diversification areas is difficult to come by.

Visible investments in infrastructure will probably boost Equatorial Guinea’s tourism potential, but the government’s suspicion of foreigners makes the country difficult to visit. The African Visa Openness Index ranks Equatorial Guinea as 54th on the continent — in other words, at the very bottom. 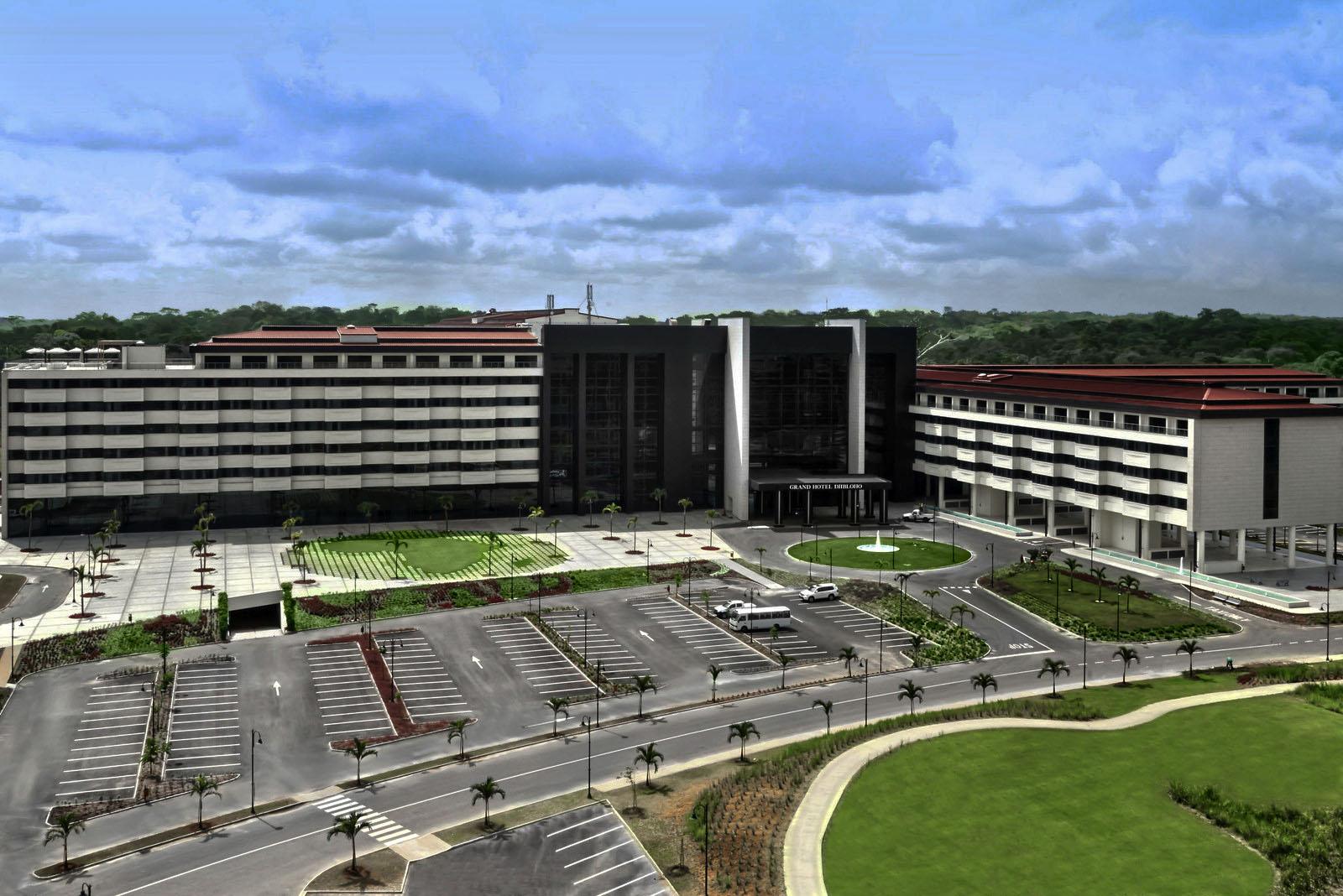 Any suggestion by the government that the empty streets of Oyala and its enormous university will one day be filled with people may prove to be fanciful. These investments may well never pay for themselves and instead stand deserted in the middle of the encroaching forest.

Along with hard borders, Obiang maintains absolute control over security and his forces say they have foiled 10 coup attempts.

Saadoun, however, believes the government may exaggerate foreign and domestic threats as a way to justify tight military control and heavy-handed crackdowns.

The latest coup attempt in 2017 saw 112 people sentenced to jail in a trial the American Bar Association’s Centre for Human Rights said in a preliminary report was “marred by irregularities” .

Critics believe many of those sent to prison had no links to the coup, which itself has only been claimed to have taken place by the government.

Another indicator pointing to mismanagement of Equatorial Guinea’s oil wealth is the fact that the country has turned to the International Monetary Fund (IMF) for a bailout within a few years of the commodity slump.

For a country with a tiny population and that produces about 300 000 barrels of oil a day, wealth should not disappear so rapidly. Still in its early stages, the IMF concluded a visit on June 20, during which it initiated discussions over a possible programme.

A key sticking point has been the lack of credible data, which the international lender can use to assess the country’s macroeconomic health and fiscal policy. Many in the government argue that global media looks unfavourably on Equatorial Guinea in key metrics such as access to clean water, vaccination and primary education because of the international communities’ use of outdated statistics. 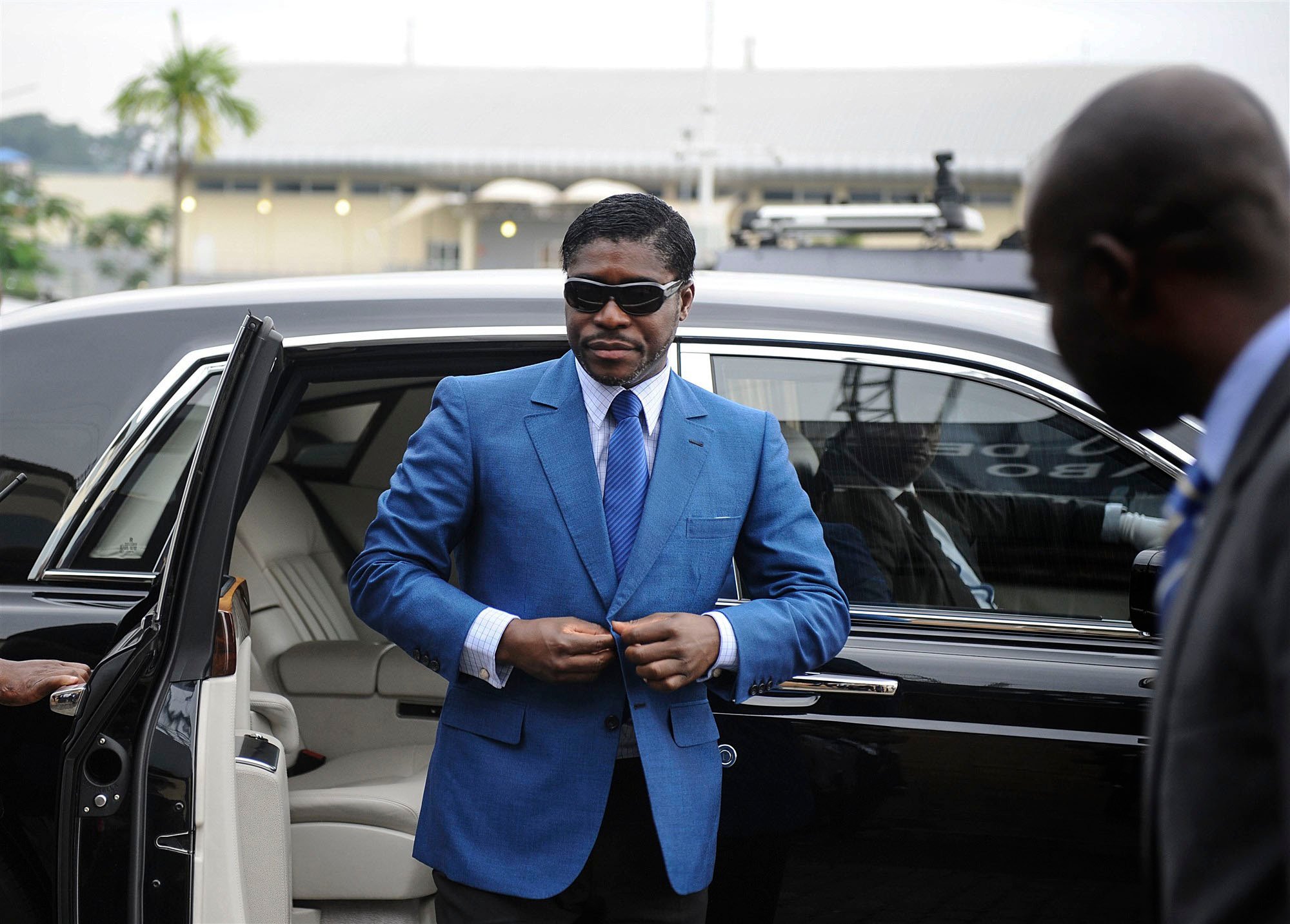 Vice-president Teodorin Nguema Obiang Mangue, one of President Teodoro Obiang’s sons, used the Malabo stadium as the venue for his 41st birthday celebration in 2009. (Jerome Leroy/AFP)

“They will use our past record and clearly this has been our biggest problem,” Lima says.

But even basic budgetary information is hard to come by. The ruling party has made a concerted effort not to collect data and instead insists most metrics have improved — based on next to nothing.

“There is an effort not to know,” comments Saadoun. “But to the extent that the United Nations does collect information; what we see is not good.”