THE NIGHT TRAINS: MOVING MOZAMBICAN MINERS TO AND FROM SOUTH AFRICA, CIRCA 1902-1955, by Charles van Onselen (Jonathan Ball) 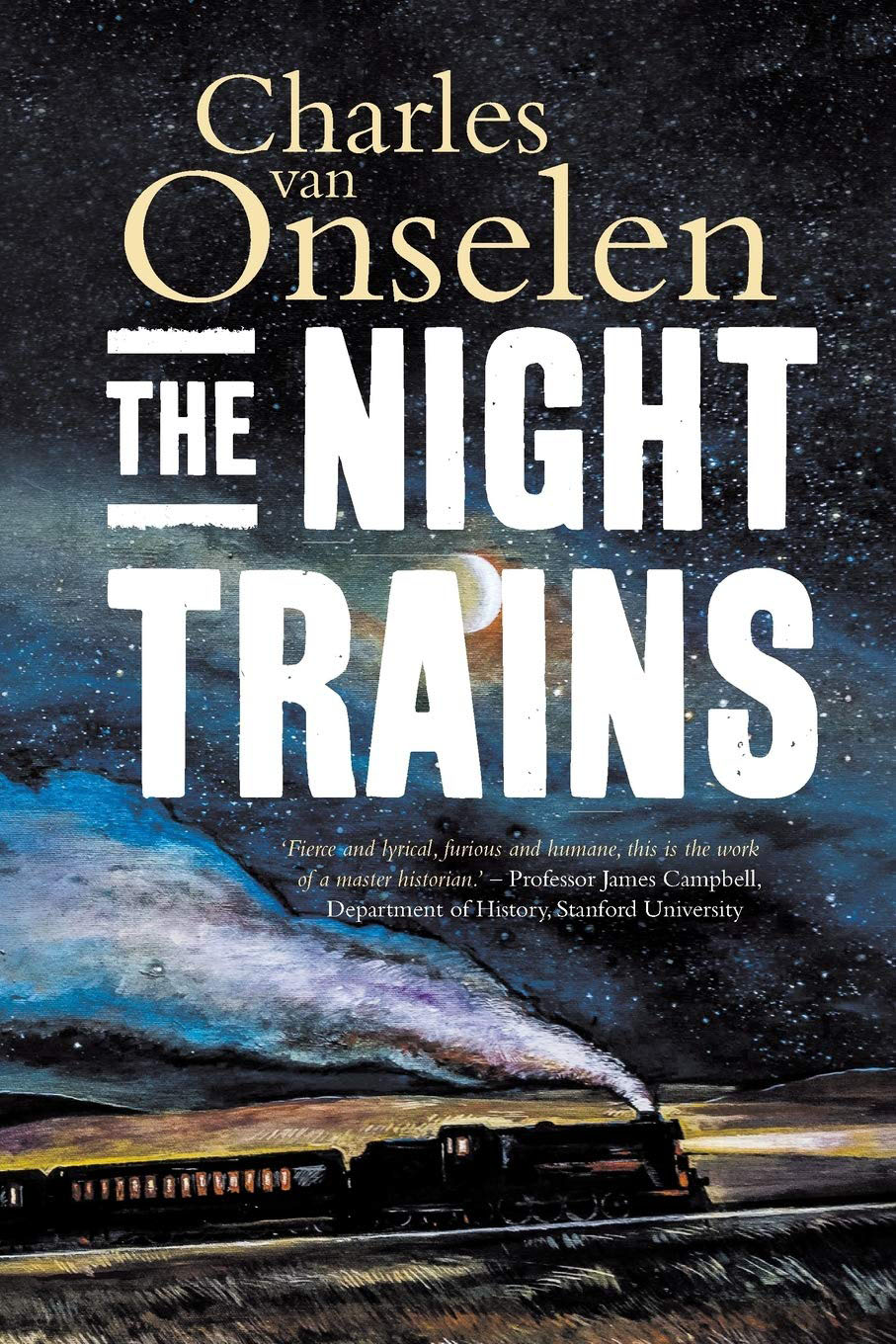 In the first half of the 20th century, about half of the labourers working on the mines of the Witwatersrand came from southern Mozambique — the area known as the Sul do Save, that is, south of the Save River. It was on the back of their labour, their exploitation, that much of the money derived from the mines was made. They had a key role in the development of mining, and thus capitalism, on the Rand, and paid a huge price for the expansion of others’ wealth. It is their story that Charles van Onselen tells in his new book, by closely examining the circumstances of their movement from the coastal region to the Highveld and back.

He calls The Night Trains a “short excursion”, and it is indeed shorter than most of what Van Onselen has produced in his long career as South Africa’s premier social historian, but it lacks nothing in detailed reconstruction of what it was like for those miners to be dragged from Mozambique to the mines, there to work hard, in awful conditions, and then to be sent back to their homeland, often in a worse state than when they left.

The railroad was a vital piece of technology in the industrial revolution; indeed, it transformed industry all over the world at different stages of the progress of industrialisation. It transported the machinery required for industrial production to the sites of that production, raw materials to factories, manufactured goods to markets, and, in the case of the Eastern Main Line, which ran from Lourenço Marques (now Maputo) on the Mozambican coast to the Witwatersrand, it also transported the men who would work the mines that were the bedrock of the burgeoning South African economy.

This transportation of cheap labour for the mines was what we would call today a “public-private partnership” — a deal between business and the state, which owned the actual rails. Despite tensions (which, as Van Onselen explains, were formative of attitudes towards the nature of the transport and the labour being transported), it was a partnership of mutual benefit. The miners, however, benefited little.

The conditions of the railway transport were horrible, with many men crammed into restricted spaces without sufficient ablutions or other necessities; the carriages were largely converted cattle trucks. The men being moved in these carriages fell into a category that was not quite that of passengers and not quite goods: they were referred to as “human freight”. The transport itself was part of their dehumanisation in the process of turning them into cheap, captive labour.

Southern Mozambique was a prime source of labour for the mines, largely because the Portuguese colonial government there had imposed a labour regime on its inhabitants that was only a slight advance on the slave trade. Portugal outlawed slavery only in 1878, much later than the other Western colonial powers. And, when it did, it instituted taxes to force the indigenous population out of subsistence agriculture and into paid work, as well as a forced-labour regime called chibaro, designed to mop up any potential workers unable to survive on the land but as yet formally unemployed.

READ MORE: Marikana was not just about migrant labour

The chibaro system, writes Van Onselen, “lay on a continuum of exploitation in which contract labour, forced labour and slavery were indistinguishable”. Given the options for the population of southern Mozambique, however, contract labour was clearly preferable to forced labour, or remaining on the infertile land in impoverished conditions. Thus men were driven into the arms of the Witwatersrand Native Labour Association (WNLA), the association that recruited men for — or coerced them into — mine labour a few hundred kilometres away.

Entering into the contract was just the start of the merciless exploitation of the mine workers. The Chamber of Mines ensured it made money even from the clothes and food supplied to the workers, clawing back some of what little it paid them. And that was over and above the money-changers who gouged more profit from the miners at the point of exchanging their currency when (or before) they reached the border.

Besides the dangers and discomforts of the underground labour itself and life in highly restricted mine compounds, the journey to and from the mines offered yet more depredation. If it wasn’t the problems of the trains themselves and the difficulties of railway travel through that region (leading to two bad accidents, carefully examined by Van Onselen) it was the opportunity the train journey offered to thieves and con artists preying on the returning miners. In this, as in the halting of trains at points where sellers of refreshments and worthless shiny trinkets could rip off the travelling miners further, that railway officials colluded.

One case of bulk theft that Van Onselen describes involved men in the uniforms of mine or WNLA officials moving through the coaches reserved for sick and mentally disturbed returning miners and taking their accumulated wages — for “safekeeping”. They, and the money, of course disappeared. Why did the men in the hospital coaches hand over their money? Van Onselen explains in a way that characterises the men’s overall experience as mine recruits: “From the instant that they first encountered WNLA recruiters and African policeman in the deep rural areas of the Sul do Save until the moment they completed the border formalities upon their return to Mozambique at Ressano Garcia, ‘East Coast Boys’ were — at various points or times and with varying degrees of intensity and urgency — assaulted, corralled, disciplined, deprived, documented, examined, fed, fingerprinted, guided, incarcerated, marched, measured, marshalled, questioned, searched, raided and released by black and white men in uniform … Every visual and subliminal code that Mozambicans ever encountered via uniformed men demanded compliance, deference, obedience and silent submission.”

Thus, in both recorded detail and masterful interpretation, Van Onselen gives the lie to the great capitalist enterprise that was the creation of “free labour” — free not in the way slave labour was “free” for slave owners (capitalist employers did, indeed, hand over their pittance in remuneration), but free in the sense that labourers had to be freed from serf-like bondage to the land to seek paid labour, which meant being channelled into exploitative contract labour. Here is a part of the Southern African story of the making of the working class, the enforced formation of a proletariat to provide the labour power for capitalist development.

Part of Van Onselen’s intent, and an important element in his history-writing, is to disturb the boundaries of national histories — to enlarge them beyond the borders of the nation-state. National histories are, in the main, also nationalist histories, and in that respect they are vulnerable to the ideological constructions of those in power in the nation-state. They are easily distorted into narratives that support and appear to explain forms of elite domination. In The Night Trains, Van Onselen uncovers not only a rich seam of “history from below”, in the experience of those on the lowest, most exploited level of capitalist development, but shows how this part of South Africa’s history is inseparable from events and processes in neighbouring regions.

It would be interesting to know what created the changes that occurred after the period covered in this book, in particular the decline in the proportion of migrant labour fed to the mines from outside South Africa. What drove the increase, after the 1950s, in the proportion of mine labour sourced from within the country? What were the commercial and political processes underlying that shift? Perhaps Van Onselen will consider such questions in the further, longer work that he says lies ahead.

The greater context, too, is worthy of further examination and understanding. Van Onselen describes the story of the night trains as part of the story of “stalled or failed development” in the subcontinent generally, and South Africa in particular. Here he touches on an old debate, going back at least to the 1970s, in South African historiography — one that set liberals against (Marxist) radicals. Was the oppressive “modern” political and labour regime that emerged out of colonialism, in the transition from an agriculturally based economy to an industrial one, a case of exploitative capitalism gone wild, of going too far? That’s the (possibly vulgarised) Marxist argument. Or, in the liberal view, was it a matter of fully capitalist development having been retarded or derailed?

That question goes to the heart of the difficult economic (and thus political) situation in which South Africa finds itself today. It’s not an argument that will easily be decided, one way or the other, any time soon — but it is one we need to have, at all levels, in a society still in the process of development.

In the meantime, we have works such as The Night Trains to aid that debate. The book demonstrates the power of detailed, in-depth research into the minutiae of the lived reality of those dragged into the machinery of modernity, and how careful analysis can enlarge our understanding of wider processes that lock money and power together. It is fascinating and disturbing in equal measure, a magisterial work of concentrated historical sympathy.